Our local restaurant history is riddled with failed attempts to create faux-exclusive, chic, and aggressively hip dining atmospheres — attempts that have often left us feeling silently judged and uneasy instead of enjoying a slightly upscale evening. Maybe it’s something innate in Arkansans, but we do not have a track record of rewarding pretension.

Happily, 7 seems to have found the sweet spot that others have and landed somewhere between a casually elegant restaurant and chill speakeasy.

Let’s start with the location — on the top floor of the Hilton Garden Inn, overlooking downtown Little Rock. Nothing against the Hilton brand, but 7 is definitely more pleasantly trendy than I would expect from a chain hotel bar. There are two separate outdoor seating areas with spectacular views of the city (downtown and the River Market itself). Fire pits and comfortable lounge seating beckoned us despite the chilly weather. Inside, the vibe is comfortable, with a partially open kitchen and an ambient playlist that invited pleasant, intimate conversation instead of shouting.

7 has a cocktail list that steers toward the adventurous without being intimidating. For instance, after noticing a different flavor in our tasty “ Old Fashioned” ($8, made with Rocktown bourbon and garnished with orange and cherry), the waitress informed us that the restaurant “smokes” all of the glasses for whiskey drinks by capturing smoke in the glass from a wood plank before pouring. Our companions chose the refreshing and strong “Moscow Martini” ($9), concocted with Stoli vodka, ginger beer and maraschino, and an unremarkable “Rock Rickey Classic” ($9), Maker’s Mark, lime and soda. The beer menu features nine local selections from six Arkansas breweries along with a dozen bottled imports and domestics.

The kitchen staff at 7 is clearly committed to putting its own stamp on familiar dishes. While deviled eggs have shown up as appetizers on many recent menus, eggs, “Thai Curry-Spiced” ($4.75), gives a nice nip of heat that complements the creamy texture of the eggs. Playing a starring role at our table was a particularly good charcuterie plate ($11), featuring generous portions of prosciutto, capicola and salami paired with mozzarella, gouda and cheddar cheeses accompanying olives, onions and toasted mini-baguettes. 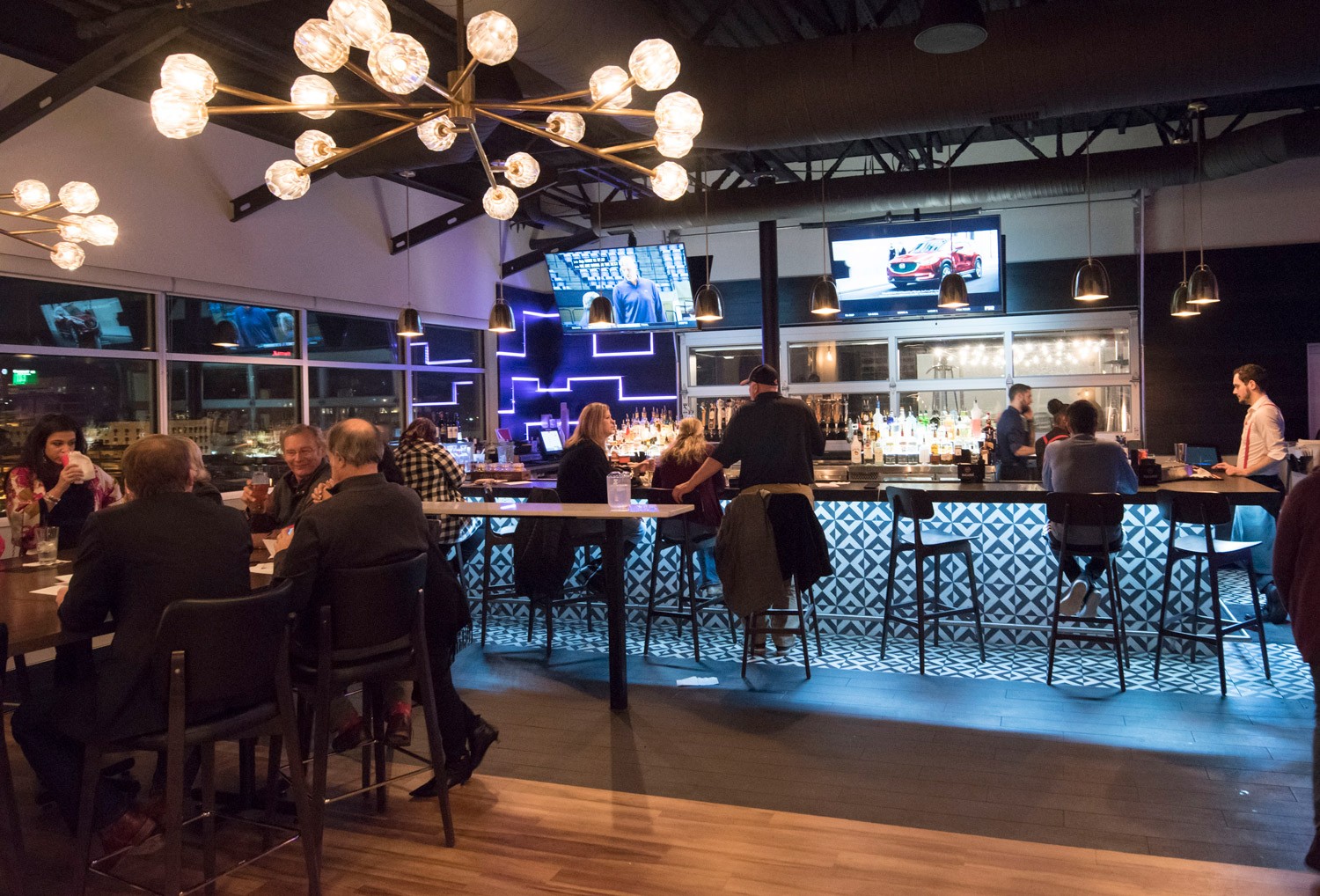 The main course listing at 7 features only seven selections — three of which are salads — along with six types of pizza. The entrees section leads with a cedar plank salmon ($18) dish. Served oven-roasted with a rosemary-mustard-maple glaze, the fish seemed just slightly undercooked.

The “Seoul Pizza” ($8) was a fortunate choice. Loaded with bulgogi-marinated chicken, cheeses, peppers, onions and jalapenos, the pizza introduced an intriguing Korean .

One of our companions opted for the “Pizza Oven Salad” ($14), a fantastic option that, it turns out, has nothing whatsoever to do with pizza. 7 starts with arugula, prosciutto, olives, tomatoes, peppers, baguette chunks and onions in a house-made herb vinaigrette, then adds mozzarella and toasts the entire concoction in the oven until the cheese begins to melt.

Desserts are another area in which 7 opts to serve a limited array: caramel apple cobbler ($6.50), fudge brownie melt ($5.75) and the most interesting of the lot, the “S’More Flatbread” ($5). Served pizza-style on flatbread, it is a twist on the classic camping dessert that ousts the Hershey bar in of and toasts marshmallows atop graham cracker crumbs, pecans and caramel.

7 is the kind of place for a first date, drinks with a boss or to treat your parents to when you’re trying to impress but don’t want it to be obvious. Understated and relaxed, with a menu to please the adventurous. We will definitely book a return visit.

Enter through the Hilton Garden Inn lobby, where you’ll be greeted near the elevator and given access to the seventh floor. Restaurant and bar seating inside and also in two separate rooftop areas outdoors equipped with fire pits and portable heaters. If you’re a whiskey drinker, note that your drink will be “smoke infused” a slightly different than you’re likely used to.