It gets hot in Mumbai. But when the sun starts to set on a long day, you can hardly beat a sweet, warm gulab jamun from the neighborhood street vendor. The cardamom-flavored balls are made of dried milk, flour, spices water. They’re fried and end up with a bready, cakey texture. Then they’re promptly soaked in rose syrup. On the street, they’re served warm, straight out of a large cast iron vat where hundreds of these delicious little balls swim in the sweet, sticky syrup. We haven’t had anything close until a few nights ago at Saffron, a new Indian restaurant in the shopping center at Sam Peck and Cantrell roads in West Little Rock.

But let’s back up. There’s plenty to experience at Saffron before dessert. The Duck ($7.95) announces itself with a bold range of colors: bright shades of red and orange that let you know the dish means business. Fried bits of duck meat and caramelized onions were held together with a pungent chili paste and topped with a drizzle of a light creamy sauce. Everything sat atop a grilled piece of paratha. The first bite lured us into a false sense of security. The chili paste presented as but punched the palate just as we were ready to take the next bite. The paratha was great on its own. What can often be too dense and chewy is light and flaky at Saffron.

If you’re a party of four, consider sharing the Peshwari Lamb Chop ($21.95) for an appetizer as well. Four sizable pieces of lamb are grilled to dang-near perfection: enough to cloak the spiced yogurt marinade in a thin crust but not enough to cook all the pink out of the middle. They’re tender and juicy, full of mint, ginger, coriander and garam masala 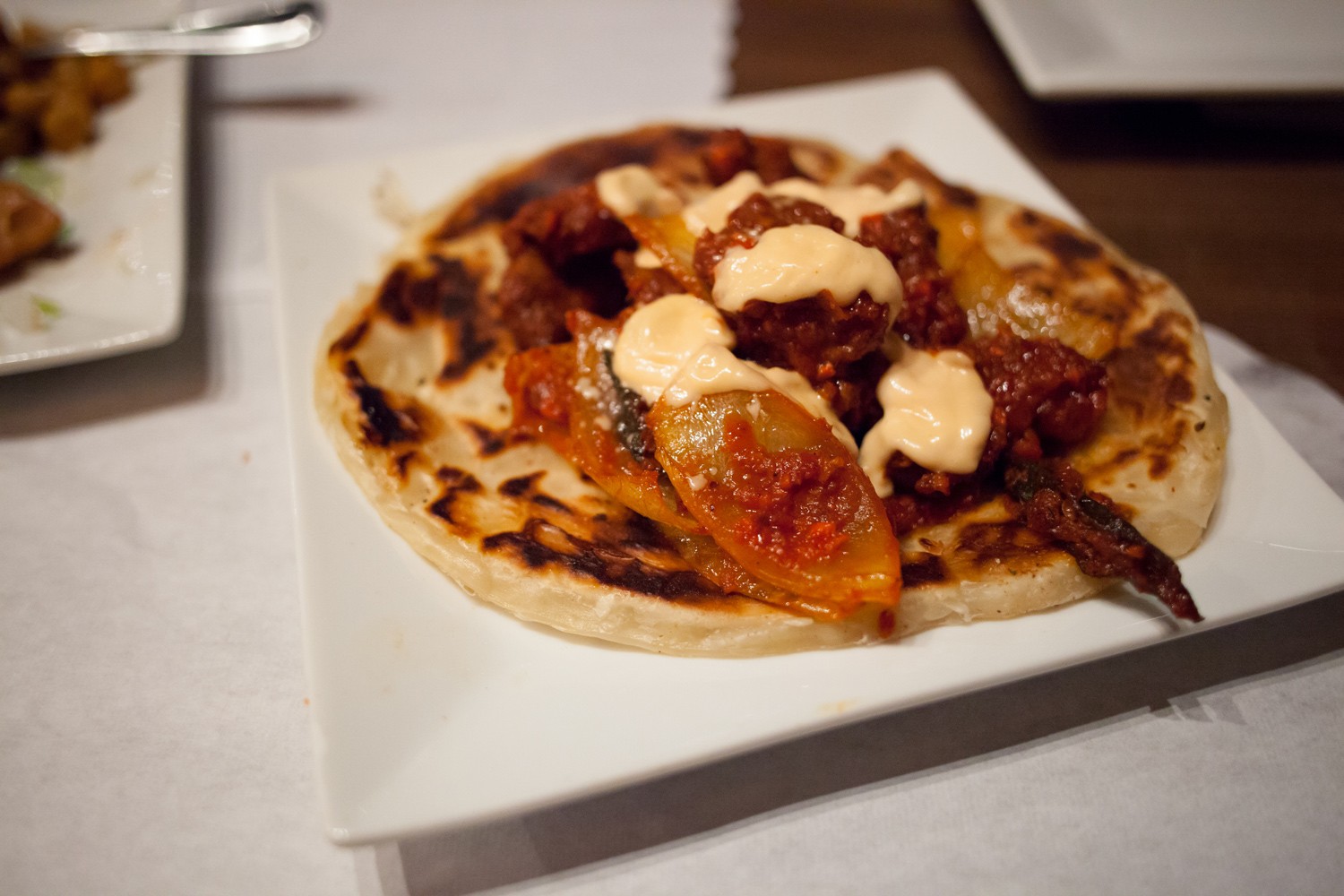 We were pleasantly surprised by the main course, Nargisi Aloo ($11.95). Two plump potatoes, each stuffed with paneer and spices, were served with a cashew sauce in a squat copper pot; the sauce positively begged for a dunking of garlic naan ($2.95).

The rich and creamy Butter Chicken ($12.95) is one of our favorites and Saffron does it well. It’s a safe bet for the less adventurous. The Bhindi Masala ($11.95), a mixture of roasted okra, caramelized onions, fenugreek seed, pomegranate and green peppers, rounded out the meal.

We happened on Saffron during its first weekend night of service and the meal wasn’t without its share of hiccups. Guests searched for silverware. Plates left the kitchen a little later than the owner (and his mother, who had been enlisted to help in a pinch) would have liked. However, everything was forgiven because the food was so well executed. A server apologized to a nearby table for the time it took to prepare their food. The couple, wowed by and complimentary of the dinner, appeared not to have cared less.

The vegetable samosa chaat ($5.95) is a classic vegetarian samosa of spiced potatoes and peas topped with warm, seasoned chickpeas, fresh onions, cilantro and green chutney. This makes a great appetizer for two. 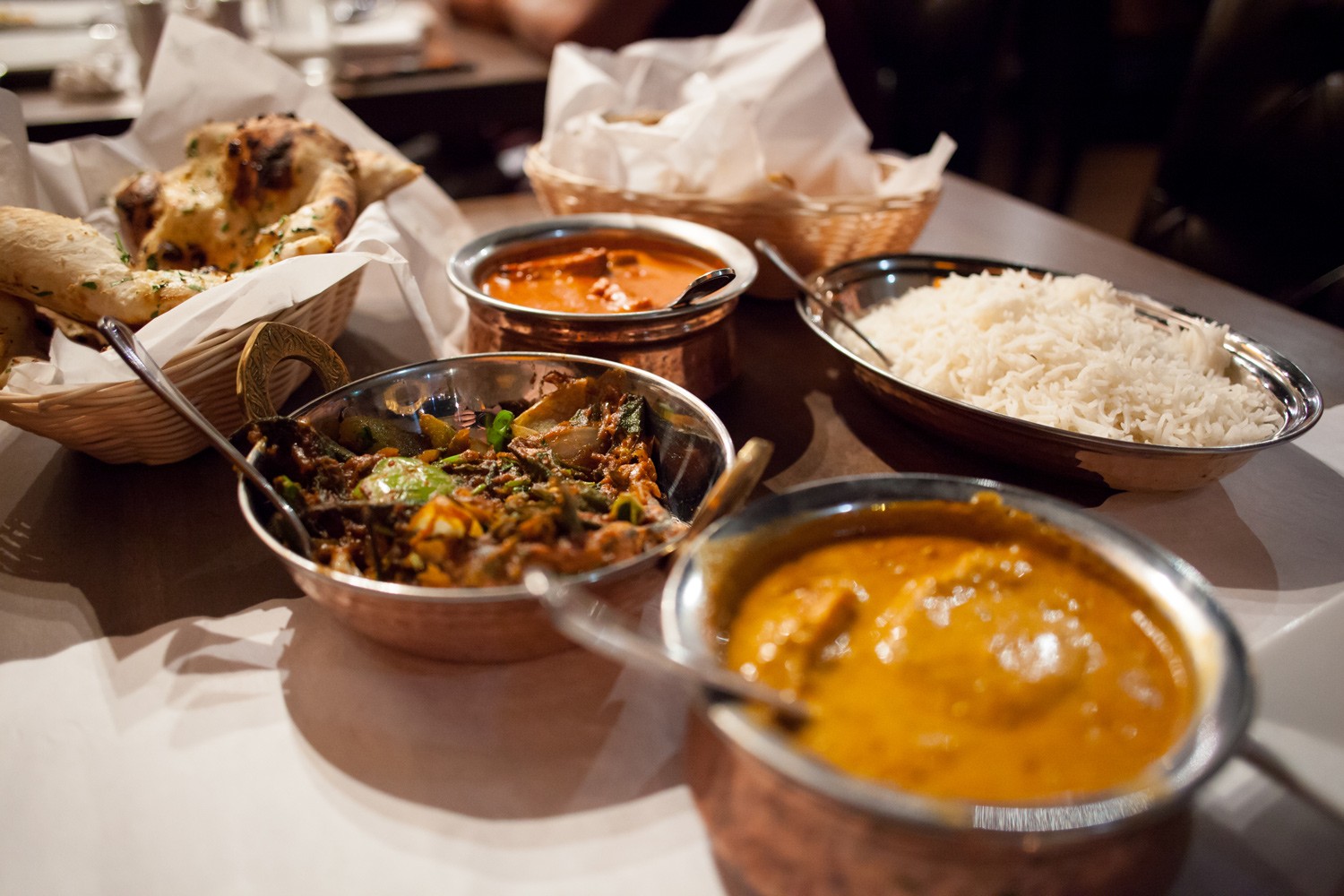