We knew very little about Ira Mittelman when we walked into the shotgun-style storefront in the Rose Building on Main Street’s Creative Corridor. We knew that his modest, cozy spot in Park Hill had developed a small but devoted following. We’d seen a picture of him on a poster publicizing a pesto-making class at Eggshells in The Heights in mid-September, on which Mittelman looked like he could be the sheepish cousin of celebrity chef/food writer Tom Colicchio.

Most of the things we’ve learned about Mittelman since then are things we learned by eating dinner there late on a balmy Saturday night. We learned that Mittelman is not afraid to use salt; his kitchen understands the fundamental culinary idea that salt, done right, makes ingredients taste more like themselves. We’d guess, too, that he doesn’t play fast and loose with whatever classical culinary training he’s had; the word “backwait” was passed elegantly between two employees as secondhand protocol, and the assortment of bitters, liqueurs and infused syrups at the bar suggested years, not weeks, of carefully considered cocktail service preferences. And, at the risk of drawing pop-psych analyses from a couple of meals, we’d wager that Mittelman believes in hiring the right people and trusting them to do what they do well.

When we took a seat beside a bowl of zested fruit at the sleek bar, one of the crisply clad boozeside employees sidled up to us with the full cocktail and dinner menus, her colleague offering coffee, commiseration and a grilled peach salad to a pair of women fresh from a wedding — and fresh from all the daydrinking that, naturally, had been required to properly salute the newlyweds. We think, too, that Ira probably believes that in order for the place to be what he wants it to be, he needs to spend some time in the front of the house, which he did by way of his gentle, floating presence when we visited, with a painting of him on the bold red accent of the rear wall candidly designating him the face of the business.

The bartender shook up something called a Flor del Diablo ($8.50), which we’d ordered in a clear attempt to cling to the last remnants of summertime. It was tequila with a splash of ginger beer and loads of red hibiscus, the latter infused into both the tequila and into a cocktail syrup, resulting in a spritzy number painted deeply crimson at the bottom, rose pink at the top and served in a highball glass with a disk of lime and plenty of ice.

We didn’t know it at the time, but we’d ordered two starters that were mainstays of the Ira’s menu even as it crossed the Arkansas River to this new location at 311 Main: the Poblano Cheesecake ($10) and the Mushroom Spring Rolls ($9). The cheesecake, anchored by a sturdy cornmeal crust and topped with a heap of diced-and-spiced mango, came across more like a homestyle cheddary souffle, with a delicate use of a smoky, underheralded pepper as the main attraction. The spring rolls appeared on a concave plate lined with a bed of lightly dressed spinach, accompanied by a bright sake dipping sauce and a mound of pickled ginger. These were the heaviest of bar bites, puff-fried wonton wrappers halved at an angle brimming with slices of smoky shiitake and carrot. 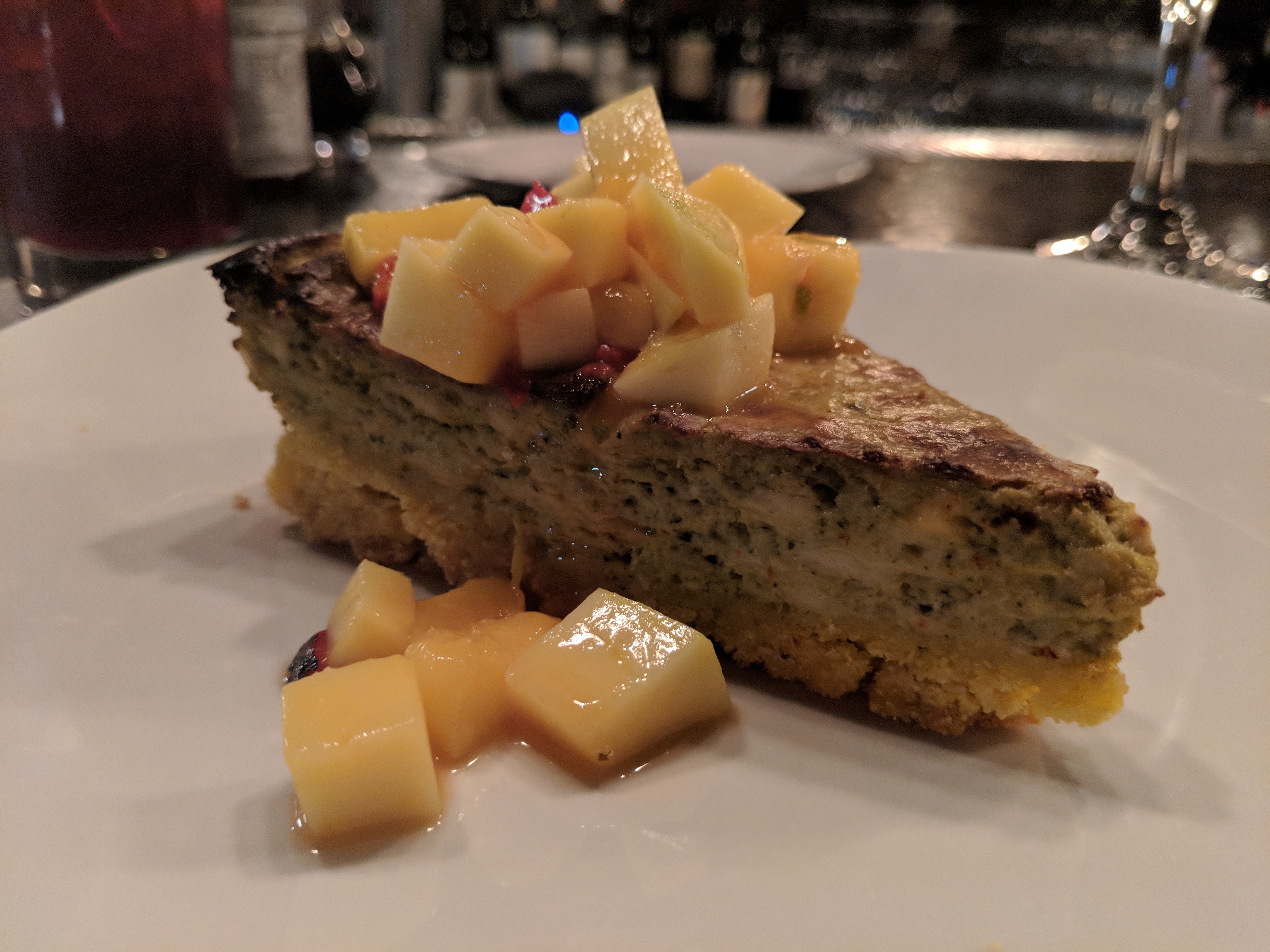 We could have stopped there, and by all means, you could, too! (We didn’t.) The fennel-tomato Cioppino ($28) beckoned, as had the seafood on Ira’s appetizer menu — house-cured Gravlax on a corn cake with tobiko caviar ($12), Gulf Coast Oysters ($16), and balsamic-drizzled Gulf Shrimp with prosciutto, watermelon and blue cheese ($14). With the coastal Carolinas hurricane disaster on the brain, though, we bypassed catfish with a tomato/onion gravy ($20), meatloaf ($18), a Tasmanian grass-fed ribeye ($38) and the Grand Marnier-sauced duck breast with red rice ($29) and went for the Shrimp and Grits ($25), billed as “our version of the Charleston favorite, with large gulf shrimp, served with Gouda chipotle grits.”

We’ve never tried shrimp and grits in the Lowcountry, but a plate of it in Oxford, Miss., at Big Bad Breakfast had inspired a lifelong fervor that we hope to someday bolster with The Real Deal. This definitely sufficed in the interim: Ira’s serves chewy, stick-to-your-ribs grits with a nutty texture and smoky, cheesy heft, surrounded by the Tasso-y gravy of your dreams and half a dozen meticulously cooked Gulf shrimp. A friend of ours always laments the shrimp tails being left on in dishes like this; these were served tailless, nevertheless enormous. Finally, when the server announced that though the bread pudding was sold out, but there was still key lime pie, raspberry coulis and chocolate terrine and a Cremsicle Creme Brulee, we ordered the brulee and crossed our fingers, hoping it was exactly what we thought it would be: some schmancy grown-up version of those Flintstones popsicles we used to consume through cardboard tubes that seemed to come from the same factory as toilet paper tubes. It delivered, and gloriously. More pudding-ish than flan-like, rich vanilla notes shone through a bubbling, torched sugar crack surface. 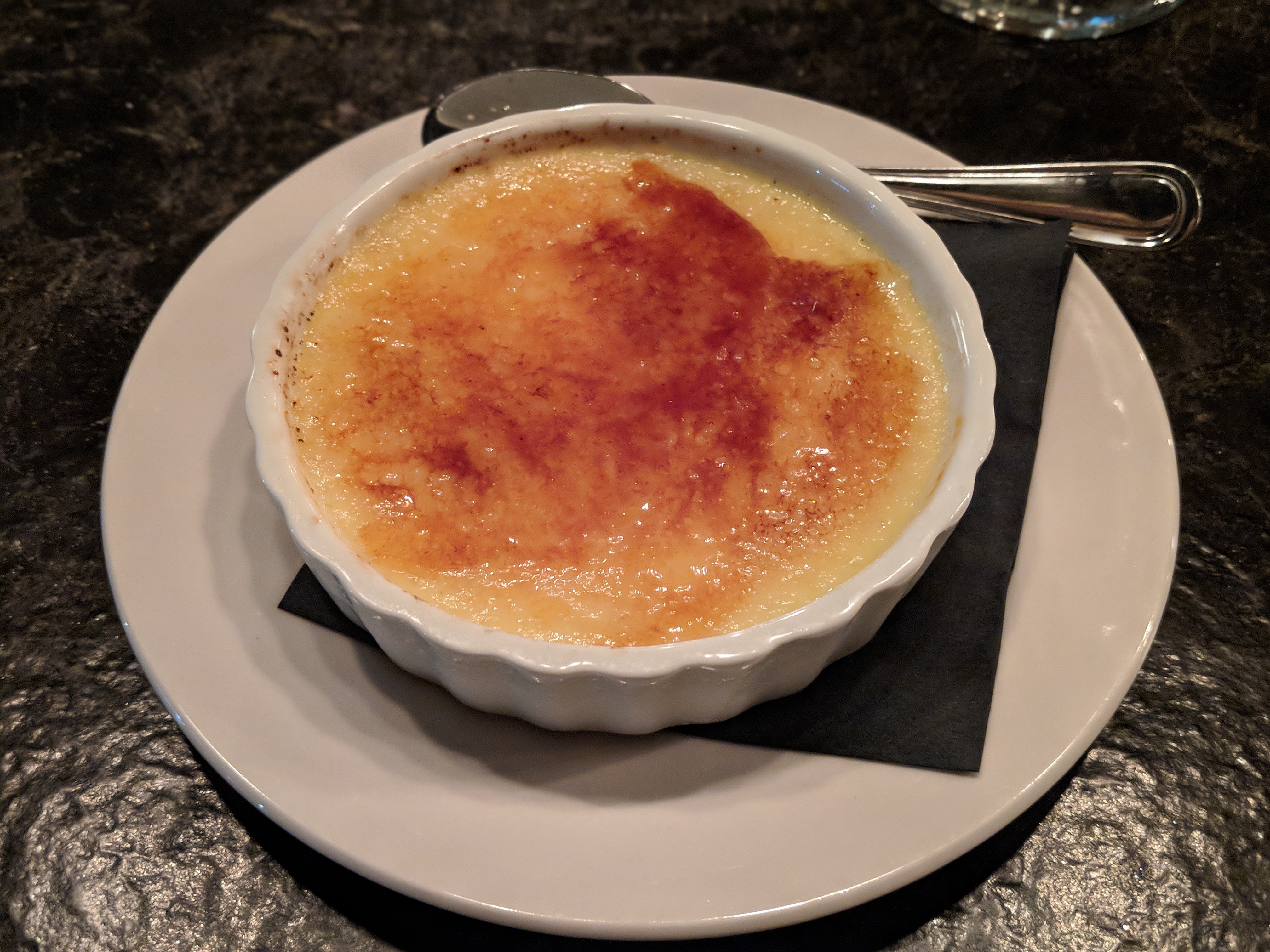 The dishes at Ira’s are elevated, the service is pristine and the presentation is artful. Still, miraculously, a place with activated charcoal and caviar on the menu manages not to feel stuffy. Maybe it’s the glittery art deco prints declaring “Prosecco!” or “Vino Italiano” on the wall. Or, and it’s possible this was just a pleasant byproduct of having been among the half-dozen folks dining at the bar, maybe it’s because dinner at Ira’s isn’t made to feel like a formula, doled out to you at some pace designed to get you back out the door in any prescribed timeframe. We doubt you’ll leave from a full dinner having dropped less than half a yard, but you’ll certainly not be pressured to consume and depart. At Ira’s, that pressure was nonexistent even as closing time neared. We overheard the pastry chef considering his choice of creme brulee for the fall menu as he took a place at the bar for a post-shift drink. Ira mingled with a lively group nearby, and nobody seemed like they were in too much of a hurry to get out of there.

If somehow things don’t work out, it won’t be because Ira and his crew weren’t on point. We hope, though — however selfishly, as it secures us access to that shrimp and grits in the future — that Mittelman has landed on historic Main Street at the right time. The neighborhood feels more like a neighborhood with establishments like his lighting up a Saturday evening downtown, and dinner feels a little more like an easygoing chef friend with a cush pad invited you to supper club. What’s more, we hope it’s not just the locals that find this place; Godspeed, you visitors to downtown Little Rock, and may the winds of SEO optimization and the Yelp/TripAdvisor/Zagat matrix blow such that you make your way past a bevy of loudly announced yet mediocre kitchens and into some place like Ira’s.

Among the other cocktails, a Bacon Old Fashioned ($9) and a pair of drinks adventurous enough to require warnings: the Amoxicillin ($10), with activated charcoal, mezcal, lemon, honey and ginger; and the Jet Pilot ($15), with a blend of house rum, falernum, punsch, absinthe, lime, cinnamon and grapefruit so potent there’s a limit of one per customer. The beer list is small but vibrant; aside from the Flyway on draft, there are Belgian beers from across the hops spectrum: a white ale called Lefebvre Blanche de Bruxelles ($8), a Saison Dupont ($10), a blonde Tripel, the Gouden Carolus ($10) an Orval Abbey Ale ($12) and a Trappists Rochefort 10 ($10), among others. The wine list is a long one, with plenty of sparkling champagnes, roses and a ton of Zinfandels and Cabernet Sauvignons from California and Washington.