Every time this reviewer eats at Flying Fish (which happens to be fairly often, especially with Catholic friends during Lenten fish Fridays), she can’t help but think about a missed opportunity: A member of her family who shall go unnamed was offered the chance to invest in the restaurant early on, and declined. Years later, we can appreciate just how deeply the family knack for poor investment decisions runs. People who live and work in downtown Little Rock are lucky that Flying Fish has solidified itself as a staple of the restaurant scene there. It’s unpretentious and kitschy with its neon beer signs, red-checkered tablecloths and huge mounted Big Mouth Billy Bass collection, equally as appetizing as a lunch stop as it is a dinner destination. We will say that we miss the old painted wooden menu sign that used to hang over the fry kitchen. It’s now digitized. We’re always tempted to buy one of the T-shirts hanging on the wall: “We Catch and Release (into real hot grease).”

Reviewer and friend tried to cover the bases with our order: a basket of fried pickles (a classic), a grilled salmon dinner plate with grilled vegetables plus rice and beans (an attempt at a healthier option), and six pairs of fried frog legs (perhaps not so adventurous to some, but a first for this reviewer).

With the fried pickles, you can’t go wrong: They were crisp, not disappointingly soggy. The generously sized salmon fillet was grilled perfectly by a team of cooks that seems to have its fast-paced behind-the-counter operation down to a science. The veggies, sliced zucchini and squash, were zesty and the rice and beans didn’t disappoint, either.

The star of the show, the frog legs, came with the traditional and delicious lone hushpuppy nestled at the bottom of the basket. Unfortunately, this reviewer, having never eaten frog legs before, did not have a reliable frame of but was pleasantly surprised. The legs tasted like chicken (it’s true) and must have come off the back end of some pretty large frogs. An $11.99 order of six pairs was enough for four people to share happily as an appetizer. Our dining companion, whose grandfather was partial to a frog leg in his day, gave these her stamp of approval.

On a subsequent lunch visit, we checked in on Flying Fish’s bread and butter: the fried shrimp and catfish combo basket, served with fries and a pair of hushpuppies. There are a variety of options available; we usually go for four shrimp and two catfish filets ($13.99) 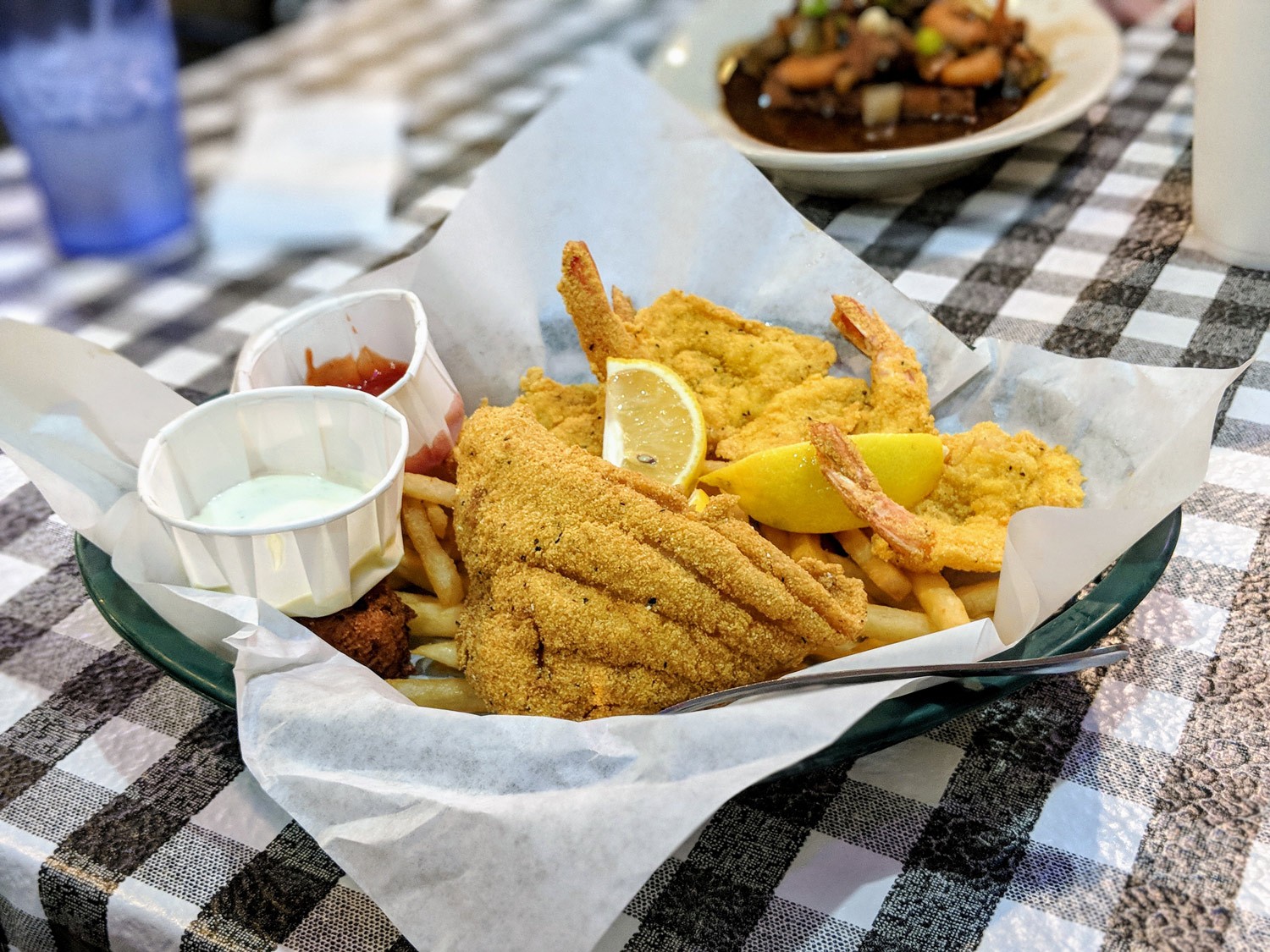 There’s an Arkansas Times columnist whose theory on catfish is that despite its prominence in Southern fare, it’s a dish without mystery. You either get it hot and crunchy enough, or you don’t. And he’s right! Flying Fish is, too, when it comes to the bottom-feeder. The mainstay of the fried combination baskets is served in generously thick fillets, covered in a cornmeal blanket and fried at a temperature that renders it cleanly crispy every single time. The shrimp is fried in the same manner, but not before being butterflied and pounded thin, maximizing the surface area that can be covered in that glorious cornmeal. Baskets are served with a little ketchup for your fries and a little tartar sauce, but a few squeezes of lemon are condiment enough.

If you believe that everything is better with a little heat, make sure and tell them at the register you want everything “snappy.” That prompts a chorus of “snappy!” from the kitchen staff and seasoning mix in the breading.

At lunch, our dining companions went with a pair of items that you might overlook, but shouldn’t: the grits and gumbo ($8.50) and ceviche ($9.99). The latter is a tureen of the Fish’s dark- shrimp and sausage gumbo covering a fried block of creamy grits. It’s the ideal comfort food. The ceviche is a lighter . It’s a mix of shrimp and tilapia cured in lemon and lime juice, with peppers, onions and a tomato-y sauce. It works like a dip and comes ringed by fresh, fried tortilla chips.

Other options range from rainbow trout to salmon, shrimp and snapper. If you’re not in the mood for things that swim, you can get a hamburger, a cheeseburger or chicken strips. We didn’t partake on this occasion, but 18-ounce frozen margaritas are available for $9.

Wednesdays are All U Can Eat Fried Catfish for $15.99.