On a dreary day, there are few things more soothing to hear than “Hi! Can I make you some tea?” That’s the usual greeting at Abbi’s Teas & Things, and though one should expect no less at a place with “teas” right there in the name, it’s a comforting opener.

Abbi’s, which Abbi Siler opened in February, is situated at the corner of Ash Street and Kavanaugh Boulevard in one of the boulevard’s handful of formerly residential spots that have been converted to retail (there are still a couple of apartments upstairs). On our first visit, door No. 4 was the charm to gain access to Abbi’s. But that search was charming; it was like having tea at some hip Hillcrest mom’s house. (We also should have been tipped off by the arrow sign reading TEA SHOP pointing toward the entrance.)

Adding to the familial ambiance are snapshots lining the walls of friends, family and lots of people’s pets. And there are a lot of walls — given the building’s history as a home, Abbi’s is a cozy series of rooms. Tearooms, if you will. Warm and engaging, Abbi’s seems like a great place to have a meeting where you can actually hear the other person or a go-to spot to tuck oneself away when you don’t want to hear anyone talk at all.

Thursdays are $6 pot days at Abbi’s, so we’d happened in on just the right blustery day. A warming pot of tea, a late lunch (2:30 p.m.) and a seat by a window while we did a little work was the plan, and Abbi had us set up for exactly that in minutes. The roast turkey sandwich and bag of Lay’s potato chips ($8.95) were serviceable and served fast, but the tasty Old Mill bread was refrigerator-cold on a cold day. A subsequent ham & Swiss sandwich ($8.95) had similar personality issues. Abbi’s chicken salad sandwich (also $8.95), however, was on point. It arrived on cranberry and was a sturdy blend of chicken breast, herbs, mayonnaise and not too many diced red bell peppers for our bell pepper-averse friend, but enough to add a bit of texture and color pop. Chicken salad is a mandatory item on a tearoom menu, and Abbi’s take, like tea leaves, gave us hopeful glimpses into the future 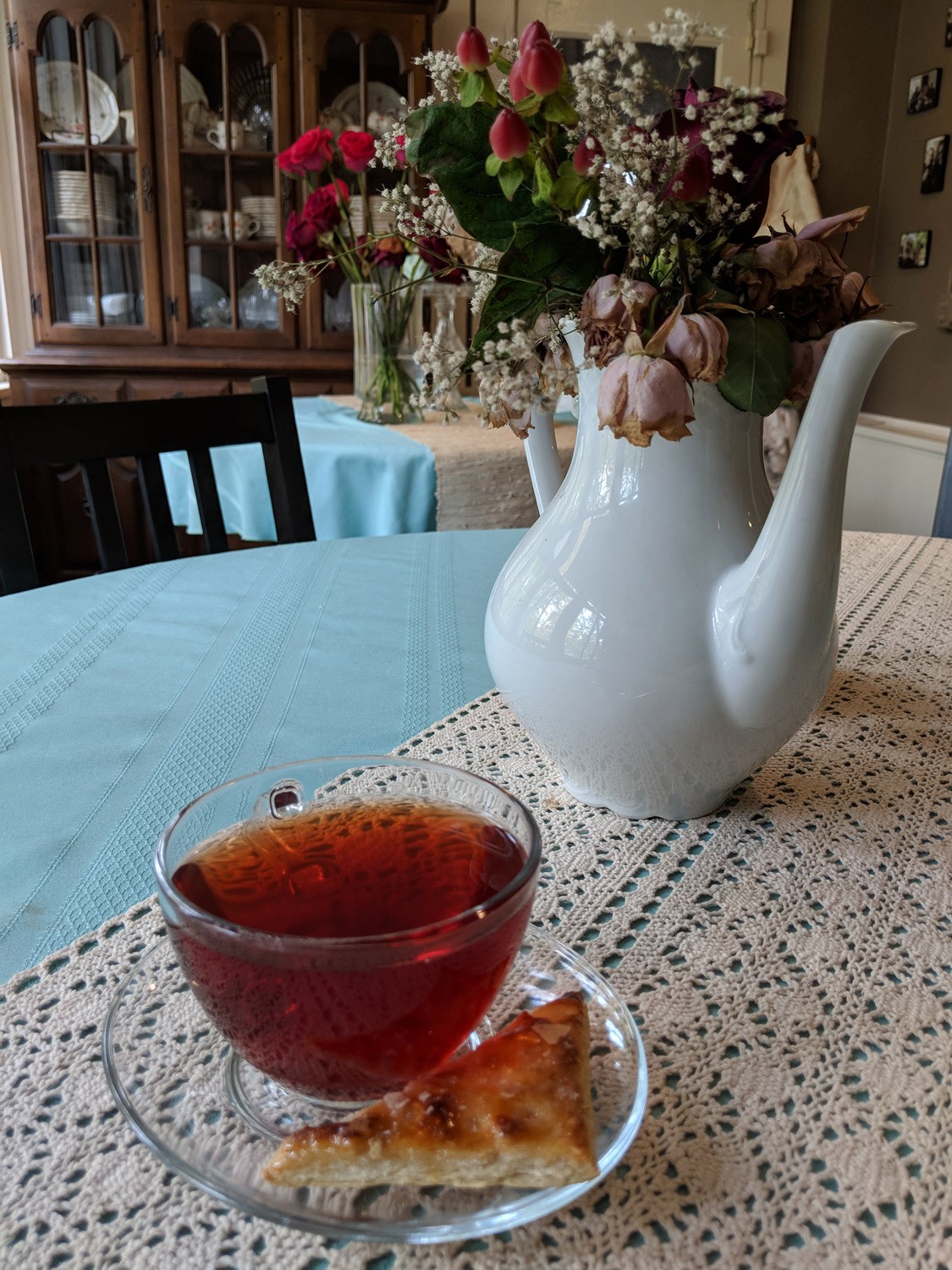 We’d love to see more attention paid to the sandwiches — maybe just toasting them during the wintertime — but, we get it, the tea’s the thing at Abbi’s; its menu tells the tale. While there are only three sandwich options on the menu, there are dozens of creative tea flavors. Seeing so many options — Cherry Fig, Ginger Peach, Blueberry Basil — reminded the flavor spectrum for teas is so much broader than . And they’re all blended by Abbi. Cups of tea range from $3.29 to $3.99; pots of tea range from $7.49 to $10.99. If paying nearly 4 bucks for a cup of locally crafted artisan tea seems a tad extravagant — and it kinda did to us at first — how much did you fork over for your last drive-through coffee?

Furthermore, we’ll admit our blueberry lemongrass tea went a long way toward warming us up in ways the sandwiches faltered. Beyond the teas — so many teas! — Abbi’s offers flavored coffee lattes ($4.79), lavender lemonade ($3) and matcha and tea lattes ($4.49-$4.99). There’s also kombucha from Little Rock’s Teaberry Kombucha Co. brewery. Coffee ($3) gets a seemingly obligatory line in the menu as well. Helpfully, caffeine content is noted on Abbi’s menu, a practice other cafes should take up.

Abbi came by our table after a bit to check on us. With our futuristic short and stout teapot half empty of its electric berry-red contents, she offered us a “re-steep” — a term new to us, which we loved. However, we’re still not sure what that meant, since our remaining tea was still plenty warm in its space-age pot. Outside, the wind bullied drizzly tree branches under a white sky. In the room in front of us, a mother and child worked on the communal puzzle set up along a wall while taking periodic tea breaks. Abbi came in and gushed at their progress. It’s a comfortable and comforting place.

The bakery fare at Abbi’s is a dual effort, with the breads, as mentioned, from the stalwart Old Mill Bakery of Little Rock, and the muffins, cookies, scones, kolaches and the like from local baker Amy of Arkansas Startup Kitchen, a workspace designed to help aspiring culinary entrepreneurs test recipes and develop business plans.

We ended things on our first visit with an airy blueberry matcha scone, a tea-infused flavor that we later learned is baked exclusively for the shop. It was a nice if a bit pricey at $4.17 after taxes. A jumbo blueberry muffin ($3.50) we tried at a later visit had copious berries bursting to pulverized perfection. The pat of butter on the side initially struck us as superfluous, but it all got spread on the muffin we and sent the muffin to an unexpectedly nostalgic level of flavor and texture. But then, we were already steeping in nostalgia due to the calm, homey surroundings and, yes, the tea.

As you might expect, the tea’s the thing at Abbi’s — the tearoom blends its own, and has created dozens of interesting flavors. Thursdays are $6 pot days. Try Abbi’s locally baked muffins, cookies, scones and kolaches (there’s usually both sweet and savory takes on this Czech pastry). Abbi’s also sells its teas for brewing at home.