When we talk barbecue and Central Arkansas, we’re usually talking about Sims and Whole Hog (though we know that some would add in White Pig Inn, Corky’s, Lindsey’s, H.B.’s and the newly revived Shack). Regulars to the River Market’s Ottenheimer Hall know of another less-heralded contender into the pantheon: BBQ (that’s right, no “i” in the name), open since 2017 and run by the husband-and-wife team of and Kevin Cox, has a menu to rival any other ‘cue joint in the area. Tucked in the southeast corner of Ottenheimer Hall, has a massive menu that includes breakfast, lunch, grab-and-go items, dessert catering options, along with a handful of rotating daily specials.

Though the rustic Renaissance Fest-style turkey legs were tempting, we opted for the pulled pork plate ($7.95), a culinary yardstick against which any restaurant with “BBQ” in its title must measure itself. The shoulder was endlessly tender and, we suspect, brined in advance. Salt is, as any barbecue master will tell you, paramount to unlocking pork’s rich heft, and version of the Southern staple managed to let the salt permeate well past the caramelized ends and into each tender shred without being detectable. The barbecue sauce we’d asked for on the side got lost in the shuffle, and it was just as well — totally unnecessary. It’s got to be daunting to serve pulled pork in a town dominated by Whole Hog Cafe’s deserved ubiquity, and makes it look easy.

Others in our party went farther afield of the core barbecue offerings: the smoked Cajun sausage ($6.95) and smoked half chicken special ($8.95). When handled poorly, smoked sausage can take on a dry, rubbery texture, but deftly handled the combination of spices in the juicy links, and the result was a consistency that allowed for a deeply satisfying slice of through . The chicken, dry-rubbed generously with a sweet-heat mix, was among the best we’ve had in town. It was so juicy the rub and chicken juice made a delightful sauce for dipping.

Each dish came accompanied by two sides. A favorite was the pile of boiled and diced red potatoes, which were soft, buttery and covered in a peppery blend of dried spices. The potato side was a refreshingly mild counterpart to another: a bold mix of black-eyed peas and sliced okra 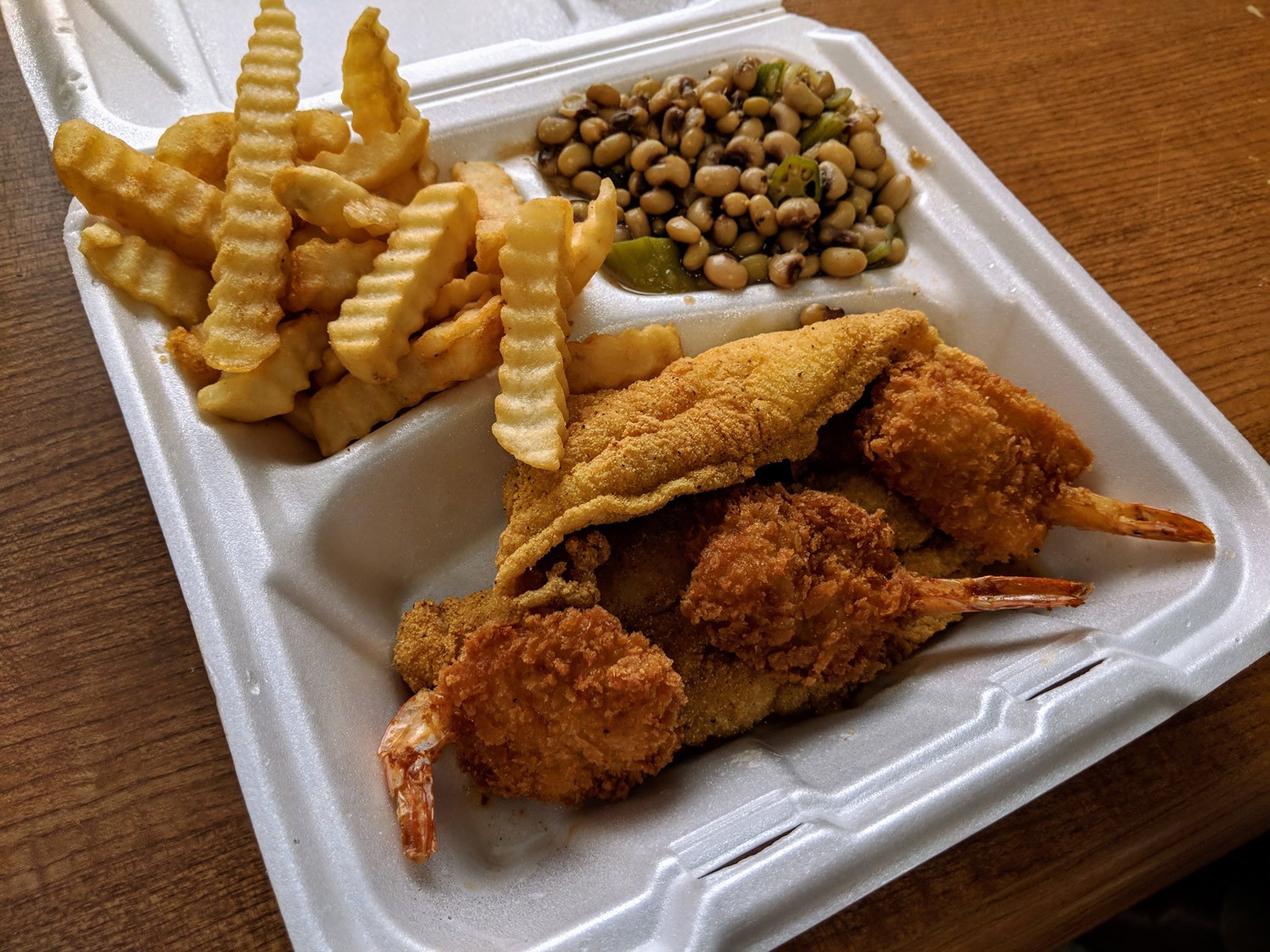 Too often, meat-and-three spots aim for an unoffensive middle ground when it comes to the Scoville heat scale; not so at . The okra-pea mashup was unabashedly peppery; it’s for anyone who keeps a bottle of hot sauce in her bag. Though we didn’t mind the absence of a hunk of cornbread or roll to temper the meal, it should be noted that it came sans such; perhaps offers it upon request? Ditto on the heat in the collard greens. They look like every you’ve ordered cafeteria-style, tender and with little bits of ham, but they have a toothsome bite that sticks around for a while. didn’t choose for its logo a wild hog on fire for nothing. A side of macaroni and cheese — the real thing, none of that powdered cheese nonsense — helped temper the heat of the dish. Same for the candied yams, sweet circles of the bright orange root that we give thanks for at Thanksgiving. The yams weren’t drowned in thick sticky but were simply bathed in whatever brown sugar concoction devises.

This is a barbecue place, yes, but it’s more than that. ribs, pulled pork brisket are joined by po’boys, pork chops, chicken-fried chicken, corn on the cobb, and a breakfast menu that includes eggs, pancakes, waffles, breakfast burritos and more.

Though the shrimp and fish platter ($11.95) was a little pricier than most of the other plates, it was well worth it. Experience has taught us that catfish establishments can be fickle when it comes to quality. On this Monday, at least, the fillets at ranked among the best we’ve had anywhere in town — freshly fried, lightly battered, spiced perfectly. The crispy, golden fried shrimps were done just right, too, but we could have used one or two more. The plate comes with two sides; traditionalists that we are, we got the fries. (They’re of the classic, cafeteria-issue, crinkle-cut variety.) We’ll be back to try the catfish or shrimp po’boy after Thanksgiving.

We also highly recommend the chicken and dumplings ($8.95), and we also recommend that you eat that dish in the River Market instead of trying to haul it home. It’s on the runny side, served generously, and doesn’t want to be carried down the avenue in a takeout box. It wants, instead, to please you with tender, pulled chicken in a spicy broth up with celery and carrots and with marble-sized dumplings that aren’t raw on the inside. The dish isn’t marred by cornstarch in the broth, either; it’s on the soupy side, but delicious.

If spicy isn’t your thing, order the mac and cheese and whatever else the proprietors recommend. Otherwise, leave your personal jalapeno sauce at home. You can also buy meat by the pound; there’s a large cold case full of pork, turkey, ham, meatloaf, bacon, chicken leg quarters, sausage and brisket.