FORREST CITY — The stereotypical Southern U.S. barbecue joint, especially in the Delta, is in a rundown shack with a decades-old provenance. Perhaps some of us take quiet delight at the gasps on newcomers’ faces when they see some of the more dilapidated versions out there.

But bad news for those looking to shock visiting relatives from states with stricter building codes: Forrest City’s Delta Q is tidy outside, clean inside, and came of age during President Obama’s second term.

Fittingly, the Delta Q menu has such nods to modernity as an onion ring tower ($5.99), a grilled chicken wrap ($5.99), and BBQ tacos and BBQ egg rolls, each available either with chicken ($6.99) or pulled pork ($5.99). There are also soups, salads, chicken salad, wings, fried pickles ($4.99) and even a sausage and cheese plate ($7.99) on the Q’s wide-ranging menu. For us, the biggest surprise on the menu, however, was the Delta Q Flatbread. It’s flatbread layered with pork ($6.99) or chicken ($7.99) with chopped green onions and mozzarella, all topped with Delta Q’s house sauce. “Forget about pizza!” the menu admonished.

As we looked the menu over, the waitress showed us this place knows what to do with the rest of the hog. A small tin bucket with gratis fried pork skins was placed before us. Manna from the hogs, as it were. Nice and the pork skins went great with our afternoon beer.

While the architectural rules of barbecue restaurants may vary, it is pretty standard that a barbecue place is first judged on its barbecue sandwich. In Arkansas, it will be pulled pork. Delta Q also does brisket and ribs and smokes chicken, but this restaurant’s tagline is “fine Southern swine.” And that’s where we found Delta Q — in addition to everything else it does— has a different take on pork ‘cue. The regular pulled pork sandwich ($4.99; a jumbo version is $6.99) comes with sauce and slaw already applied, which is anathema to some BBQ meat pedants. We were a little freaked out at the prospect ourselves, so we asked for the slaw on the side.

We should have just let Delta Q do its thing. After a tentative forkful or two, we gave in and put it on the bun, and it really made the sandwich sing. This remarkable house-made chopped cabbage is a barely creamy, very peppery version of coleslaw with no sweetness whatsoever. Instead of taking anything away, it added a wonderful counterbalancing crunch to the soft, smoky and tender shards of pork. Those cloyingly sweet, gloppy wet slaws out there must have their fans, since versions are found at nearly every fish fry and funeral in every county in the state. But if this Delta Q slaw started finding its way into more dishes and onto more plates, Arkansawyers would soon find themselves standing a little straighter, walking a little taller, and laughing a little louder. We have but anecdotal evidence thus far 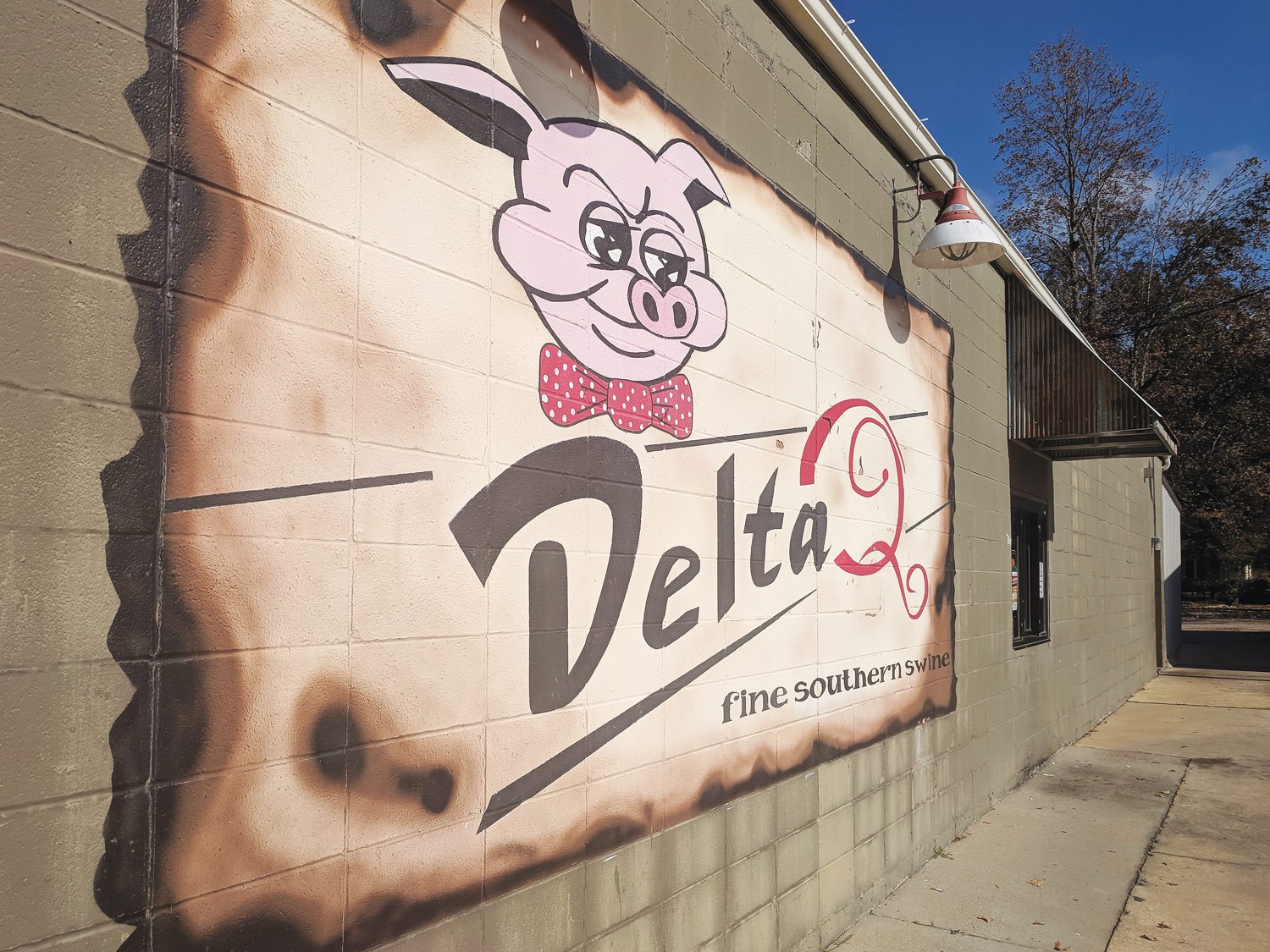 Likewise, the included barbecue sauce complemented subtly with tang and spice rather than the usual distracting sweetness. Sadly, the bun didn’t come toasted as promised, which might have edged this distinct barbecue sandwich into perfection. But the slaw made up for this small misstep.

insanely creamy mac and cheese provided a serious threat to the pulled pork in becoming the star of the plate. Most of the “regular” sides — hush puppies, potato salad, okra, baked beans, green beans and that unique take on slaw (all $1.99) — are made in-house, the waitress confirmed, but the fries and rings ($2.99) are frozen.

Our dining buddy’s catfish looked pretty good, too: small fillets fried to a gold tone. (It wasn’t his first visit, so was an optional BBQ rumspringa.) The small order of catfish was four pieces, more than sufficient even for his long and lanky self. Our buddy found Delta Q’s crispy catfish tasty and — like his french fries — not over-salted. (The “Mississippi Delta”-origin catfish fillets were advertised on the menu as “market price,” which was a new one on us for that dish.)

Our bill was presented in a cute tin bucket, similar to the pork rinds. Forrest City’s upstart Delta Q is presenting a style in barbecue and beyond all its own; we like that. Long may it run, until it has a lengthy history and a rustic patina all its own.

Note to the tall: The booths here are kind of tight; there was a lot of knee-bumping in ours.

Beer and wine served. Delta Q also has a drive-up window for pickup orders and takes its food truck out for special events.