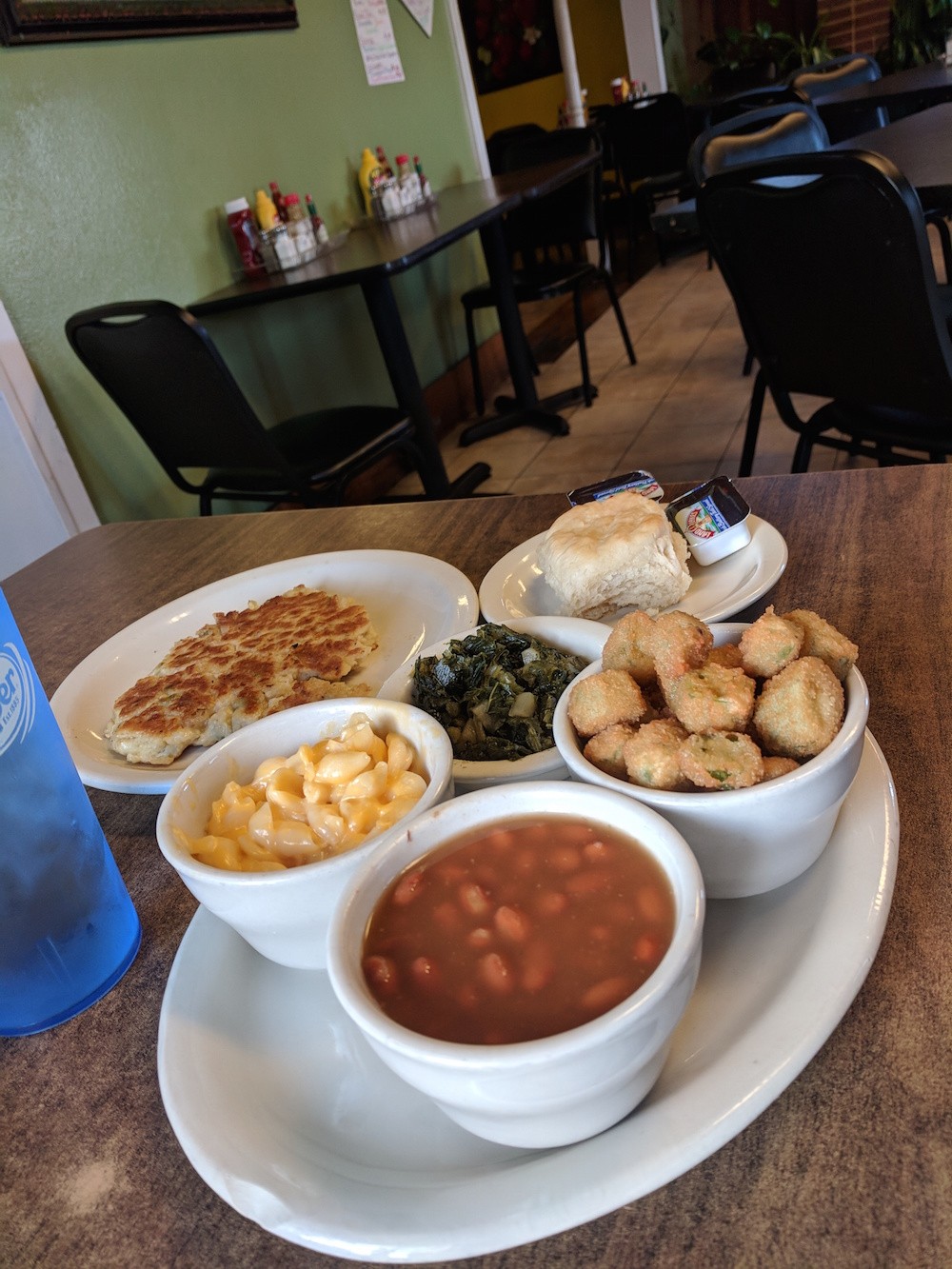 Like the best of plate lunch places, Higdon Square Cafe has a feel like it’s been around for decades, though it only opened in late 2007. Random knick-knacks and the cafe’s United Nations collection of coffee cups line the built-in shelves. Barbie-sized Elvis and Priscilla Presley dolls stand guard over the cash register, despite being dressed in their wedding-day best. Add in the cedar paneling and fireplace, and it seems like grandma might walk around the corner at any minute, drying her hands on her apron.

Higdon Square Cafe’s menu, too, skews — in the very best of ways. “You here for the meatloaf?” a random waitress asked us the moment we stepped in on our first visit. She was joking because it had been popular that day, but she’d totally hacked into my mainframe. I did get the meatloaf, among the final portions available that day, and it was spectacular — moist and flavorful, a respectfully traditional take on an overlooked classic.

I typically prefer a tightly-focused menu — do a handful of things and do them well, I say. But I give a pass on this rule to plate lunch places, in part by design as they are trying to do more things for more palates than, say, a pizza joint, and in part by loving nostalgia. I never want these vestiges of Americana and Arkansiana to go away, so I’m always happy to find a place that’s doing meat and three at all, but always thrilled to find one doing it as well as Higdon Square Cafe.

Chicken fried steak, liver and onions, chicken fried chicken, chopped beef, fried chicken livers and red beans and rice with smoked sausage rank among the old-school plate lunch and dinner entree options ($4.99-$8.99). Catfish or shrimp or half and half plates are available for $10.99 and up (“SORRY, NO SUBSTITUTIONS, THIS IS A SET PLATE!!!!” reads the largest font on the menu ). Six-ounce ribeye steak dinners for two with baked potatoes, salads Texas toast is a deal at $11.99, though the menu also reminds/yells NO SUBSTITUTIONS — and has a less-welcome old-school surcharge of $2 to get it to go. 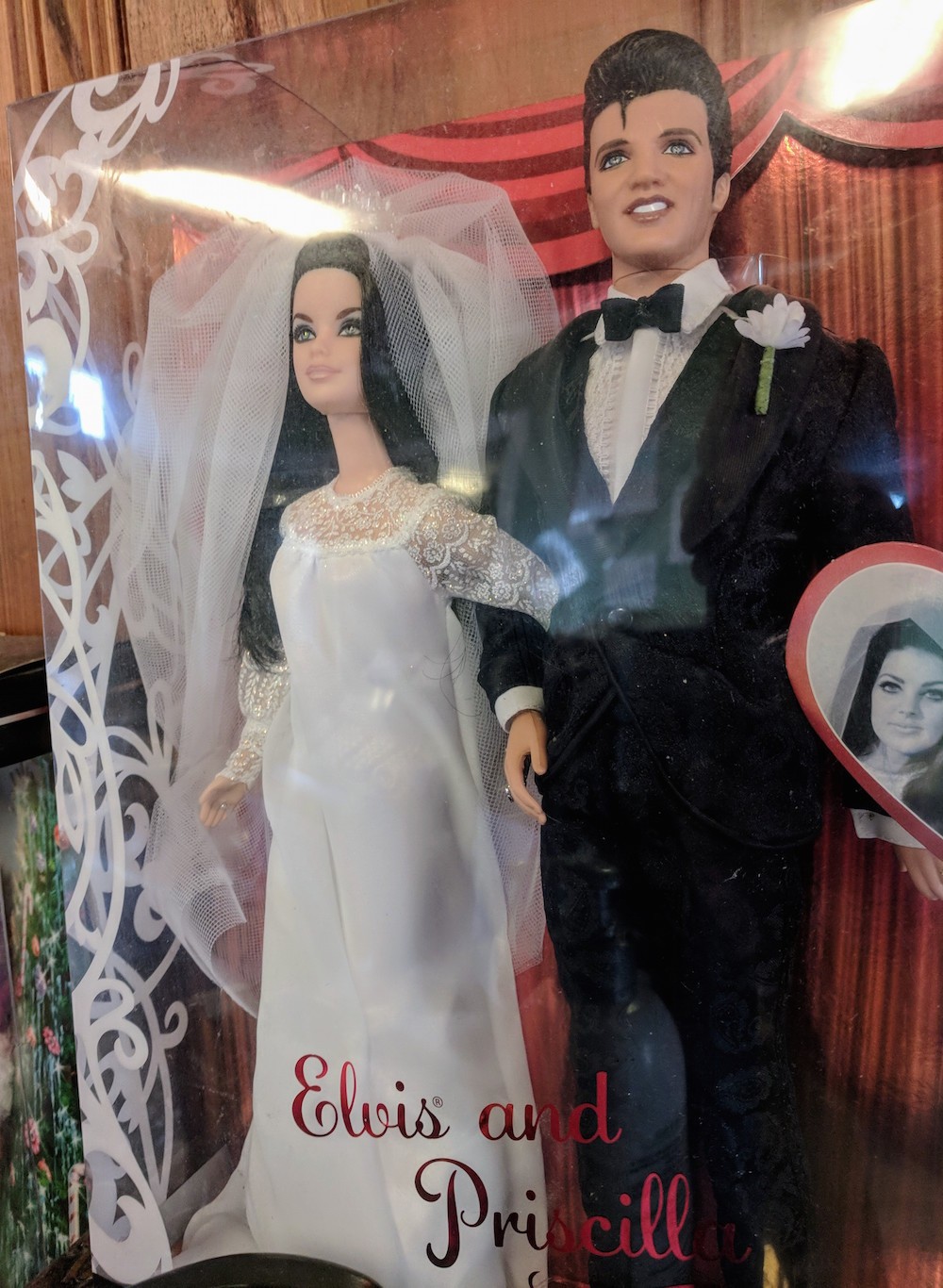 On a subsequent visit, the cafe was still busy with a late lunch crowd at 2:30 p.m. We overheard customers as they left bragging to their waitress about the slaw. Meanwhile, we were lamenting a breakfast that could have been, looking longingly at the $4.99 breakfast special of a short stack, two eggs and two pieces of bacon, ruing our slothful existence.

We ordered a veggie plate, which still included a staggering list of options: green beans, turnip greens, fried squash, fried okra, grilled onions and mushrooms, green peas, corn, rice, potato salad and applesauce among them. The mac and cheese was not mac, but shells, which we prefer — shells trap delicious cheese sauce, you see, while it just flows through macaroni.

A lover of all starches (have you seen me?), I don’t have a default answer for biscuit v. cornbread. But our waitress warned us the cornbread was on the sweet side. Harking back to our breakfast jones, I opted biscuit. It was a delicate, floury and flaky thing, dense and not too tall. (Again, have you seen me?) Though the cornbread would have been fine — and more obviously paired with the brown beans — the biscuit proved a worthy sopper for my pintos and greens alike.

And, friends, all of this was great, and it was good. But this potato cake. This firm browned disk with diced onions and peppers hidden within is a wonder of the spud. Spa City so-called friends, how have you not told me of Higdon Square Cafe and its potato cakes before? I wish more Arkansas restaurants would embrace our state’s Germanic heritage, but these hefty potato cakes make the case more eloquently than words ever could.
Just like the rest of the cafe’s offerings, a plethora of desserts at Higdon Square Cafe. Cobbler is offered at $3.99 in blackberry, peach and, very intriguingly, pecan. Make it “a la mode (with ice cream),” as the menu helpfully explains, for two extra bucks. There are daily assorted cakes as well, at $2.49 a slice, or $3.99 with a scoop of vanilla ice cream. The cafe’s bakery, in fact, it seems to do a brisk to-go side business with its scones (white chocolate caramel, blueberry or apple cinnamon), cookies (chocolate chip or peanut butter cookies, two for a dollar), cinnamon rolls and more.

Adding to the embarrassment of riches, Higdon Square Cafe also does burgers and sandwiches and wraps, including a welcome but seldom-seen turkey burger. As if all this weren’t enough, a sign on the wall promotes all-beef hot dogs ($2.09), dogs with sauerkraut ($2.89) and chili dogs ($3.99). Our lovely friend tried the and pronounced it fantastic. We tried a butterfly shrimp boy from the sandwich offerings, but even with a nicely -up cocktail sauce for dipping, it was a bit dry and disappointing, and the fries just okay, especially in light of the care that goes toward the potato cake. But so many hits on this lengthy playlist, we couldn’t even be mad that the HSC kitchen turned out something merely average. We look forward to sampling more from Higdon Square Cafe, new traditionalists on the Springs scene.

Quick Bite: Higdon Square Cafe does meat and three right, with a flavorful meatloaf and onions and peppers-laden potato cake. The cafe also does a brisk side business in to-go baked goods like cookies, cinnamon rolls scones.

Other info: No alcohol; baked goods to go.