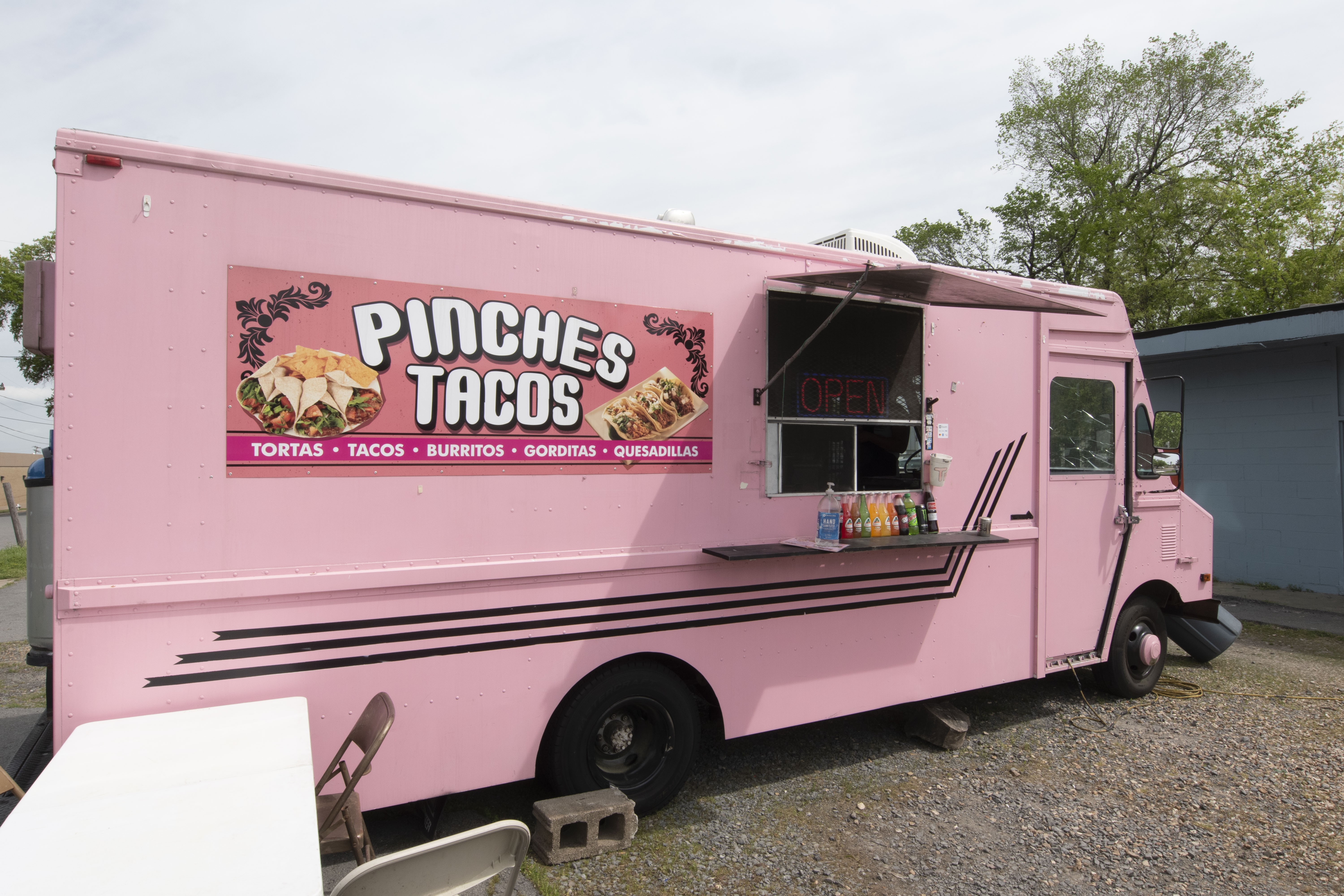 Unfolding a chicken tamale from its glistening wrapper, it becomes pretty evident why Pinches Tacos includes a plastic fork on top of the cornhusk pile. Lupita’s homemade tamales are the taco truck equivalent of a bowl of chicken and dumplings — shredded chicken, slow-cooked with the mildest of green peppers and swaddled in steamed, barely-seasoned white cornmeal.

The powder pink taco truck sets up shop at the corner of 9th and Collins streets 8 a.m.-4 p.m. on weekdays, just east of where Interstate 30 crosses 9th Street, and the first face you’ll likely see is that of Patty Sanchez, leaning down to deliver a “How are you, señorita?” At the grill is Patty’s brother Alfredo Nava, and sitting in the wings is the woman who gave Pinches Tacos both its earthy namesake and its locally beloved tamale recipe, Guadalupe (Lupita) Alonzo.

“I like the tamales. But not because it’s my mom!” Sanchez told us through the sliding screen truck window. “Everybody loves the tamales.” 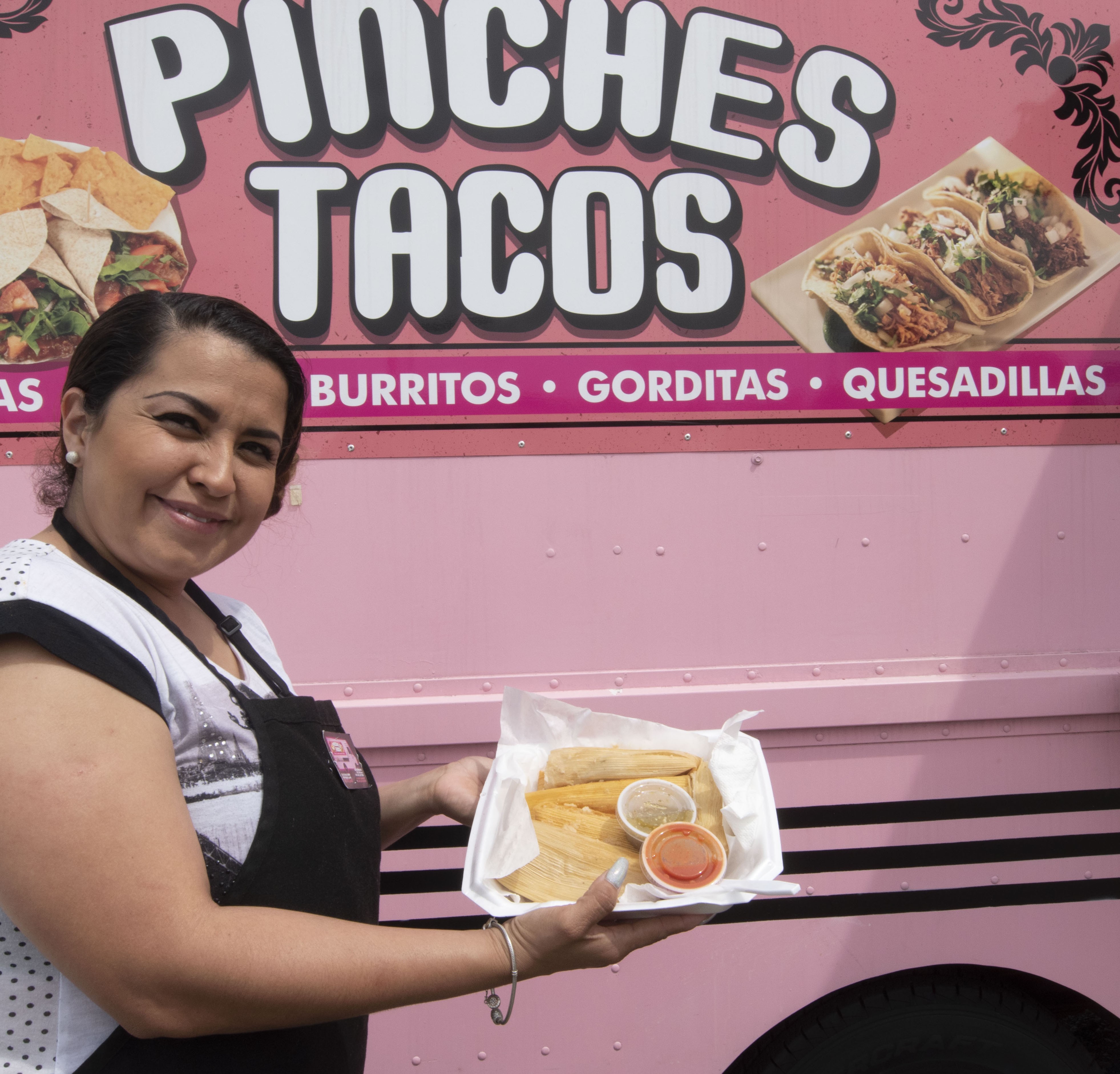 For the Scoville scale extremists, Pinches’ comida may need a dose of the mild green sauce or the fiery red sauce served in plastic condiment cups alongside. Sanchez warned us the red sauce is no joke; consider tempering it with a bottle of Jarritos soda, up for grabs at Pinches in tamarind, grapefruit, mandarin, fruit punch, mango or pineapple.

The gordita eschews the pillowy texture of its fast food cousin, wedging shredded lettuce and cheddar into a sturdy, pita-esque pocket with cubed steak, chicken or beef. Likewise, the street tacos were presented in a double layer of flour tortillas, resilient enough to eat with your hands, in a standing position. They’re pretty much what you’ve come to expect — minced cilantro and yellow onion atop a smattering of your choice of protein. The lengua tacos are presented with two tiny planks of flat-grilled pineapple atop the chopped, slow-braised tongue, custom-built for easing (or tricking) a picky eater into more adventurous taco territory. There’s more formal fare, too: a steamed lamb dish and menudo.

The best thing about Pinches Tacos, though, might be its name. “Pinches” is a modifier in Spanish that loosely translates to “goddamned” or “fucking,” meant to heighten an insult, e.g. “¿De dónde viene todo el pinche polen?” (“Where’s all this fucking pollen coming from?”)

It’s the word Lupita used, Sanchez said, when Sanchez would ask her mother what she wanted for dinner. “Ah, just some pinches tacos,” Lupita would say, as in: “Whatever. Nothing too fancy.” Sanchez always obliges, she told us, but not before uttering an incredulous “Really, Mom?”

There’s that, and the fact that street tacos were meant to be eaten this way — truckside, perched on a folding chair at a sun-drenched card table.