Those not feeling misled about the amount of meat in their meat may have missed it. But brace yourselves: The Arkansas legislature made the national news a few months ago. Like so many proposals in recent years, this was another industry-backed Republican effort to hold back the hands of time. Witness state Rep. David Hillman’s Act 501, signed by Gov. Asa Hutchinson in March, a.k.a. the Tofurkey Law.

The law’s stated purpose is to “protect consumers from being misled or confused,” but, anecdotally, we found more vegetarians who had accidentally been served meat than vice versa. Of course, there was a reason behind the sudden legislative concern for a problem no one’s had — after years of anonymous toil in the freezer aisle and as an afterthought on menus, plant-based food products have been having a moment.

The mere existence of this law means, in the battle of Tofurkey v. the State of Arkansas, the state has already lost the war. Vegetarian dining has evolved from the days late last century when a veggie burger was an exotic entree for forward-thinking restaurants.

“It was a way to fill out the menu in a sort of new way,” said John Gaiser, a former restaurateur in the city, now owner of Pennsylvania Trading Company. Gaiser operated Little Rock’s stalwart Buffalo Grill restaurant. “When the veggie burger hit Buffalo Grill, it would have been around 1988 or 1990,” he said. “We bought [pre-made] Gardenburgers, which was a brand.” He’d seen them in trade magazines. “I chose the Gardenburger because it tasted better — some of them tasted like compressed cardboard at the time,” he said. “It handled well on the grill, it looked good on the bun.” Now owned by Kellogg, Gardenburger launched in the mid-1980s, its titular dish based on a recipe from a vegetarian restaurant in Oregon.

“I don’t think it ever occurred to any of us at the time to make them ourselves,” he said.

“If you could go back and grab some menus from restaurants around here at that time, including some chains, you’d find veggie burgers on a lot of folks’ menus,” Gaiser said. “So it wasn’t the cutting edge, but it was walking up to the cutting edge,” he said.

Even during the Reagan-Bush years, meat-preferring customers weren’t misled or confused as to the contents of the new menu option. However, some carnivorous cut-ups took the opportunity to mock the dish — or, as Gaiser put it, “there was a counter-cultural sideswipe that wasn’t entirely positive.”

As for the burger, “it didn’t sell gangbusters, but it gave everyone sitting at the table an option to be satisfied,” Gaiser said. “It was a good thing.”

Further back, in the late 19th century and early 20th century, vegetarianism was considered so avant-garde in the U.S. that a big bulk of it was practiced at communes and Utopian cults up North.

Even in this land of soybeans and rice — not to mention high obesity rates — Arkansas will likely long prefer its meat. Still, nowadays, in most cities, vegetarians can now eat the same gnarly pub grub as their flesh-eating brethren — burgers, dogs, “fish” sandwiches and more can all come plant-based. Even Burger King is getting into the action. So … progress?

Many vegetarians will note that it’s just as easy to eat unhealthily as a vegetarian as it is for a meat-eater. Still, this sympathetic carnivore appreciates the marginally healthier option and found, in addition to the River Market plaza’s lauded vegan spot, a SoMa eatery dishing out meatless meat — and misleading no Arkansas diners in the process.

Located on South Main Street, Ester’s rose from the ashes of Core Brewing of Springdale’s contraction from the Little Rock market. In fact, the huge Core sign still stands outside, not entirely misleadingly, as Core is still available on tap, and craft beer remains a focus at the bar. Even the batter for Ester’s hush puppies contains Core beer.

Any item on the menu can also be prepared for vegans, even down to the cheese — or “cheese,” as it were.

Ester’s “Land Yacht” is not only wonderfully named, it holds great promise: A Frito chili pie burrito, you say? Sold. Containing quinoa and bean chili, dill sauce, cheddar and apparently Fritos, ours was tasty and nicely griddled, but lacking the crunch necessary to fall anywhere in the realm of being mentioned alongside Frito pie. The “We Be Clubbin’ ” club sandwich had no such issues — but at $12.99 is the most expensive thing on the menu, and on the high side for a club sandwich of any origin. Similarly cleverly named, the “Dej Au’ Jus” is a veggie take on a sliced roast beef sandwich. Even with a fine buffer of caramelized onions, provolone, dill horsey sauce, and, of course, jus, the faux beef came off a bit chewy. Texture, of course, is key in meat mimicry, and expectations are high in the age of the Impossible Burger. The science is obviously still sorting out veggie roast beef.

However, the veggie burger — which by rights should be the flagship menu item at a place like Ester’s — satisfied. Big, and noted as an “18-ingredient veggie patty,” it’s served with the usual burger trimmings and comes with fries or Fritos for $10. Ester’s “house burger” takes the same patty, blackens it, and adds remoulade and crispy onion strings for another dollar. 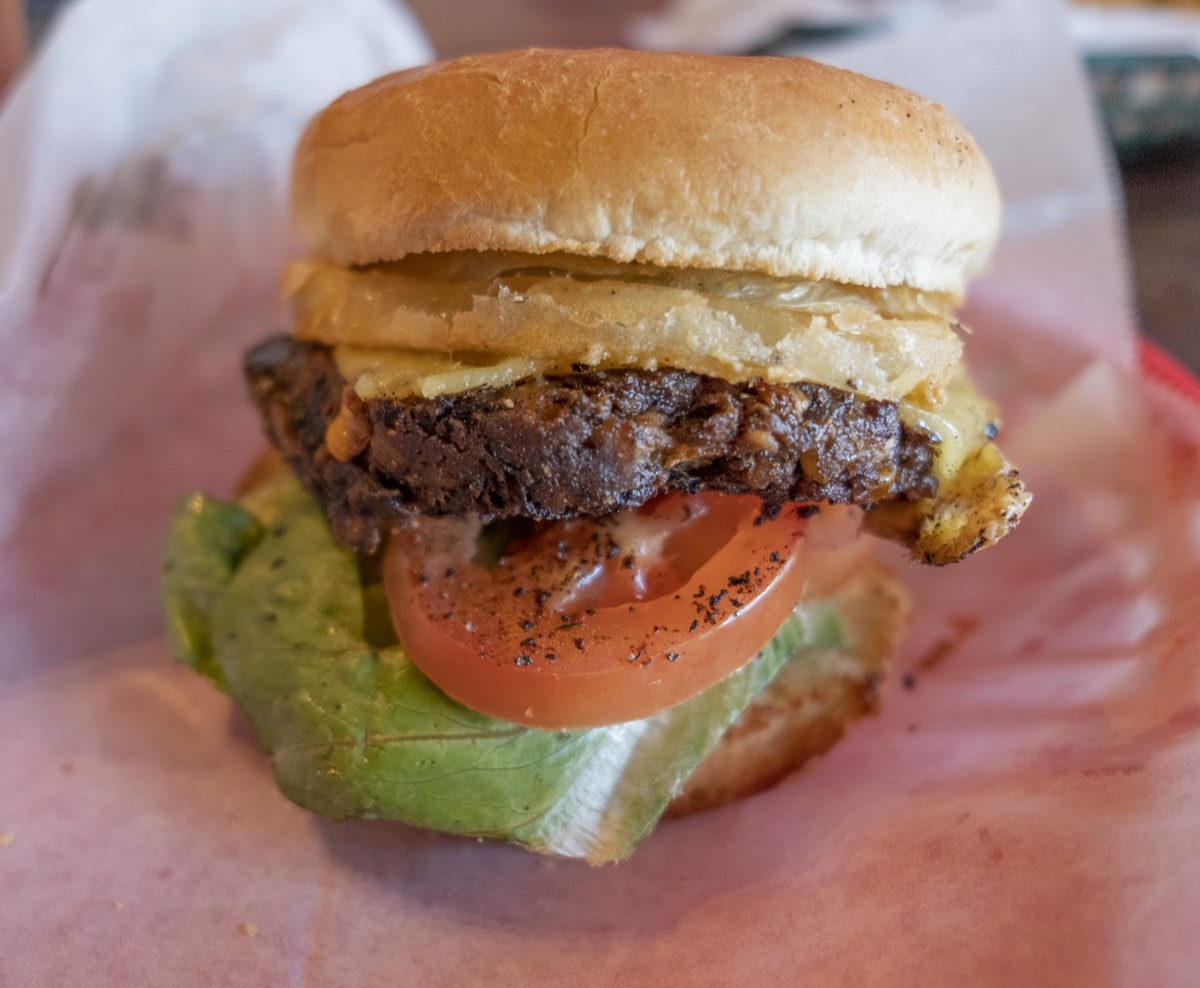 Speaking of fries, the time has come to praise the french fries at Ester’s (battered in a coating that would also be great on veggie corn dogs, just saying). These fries are a highlight of the menu, and should be being discussed in LR fry fan circles. 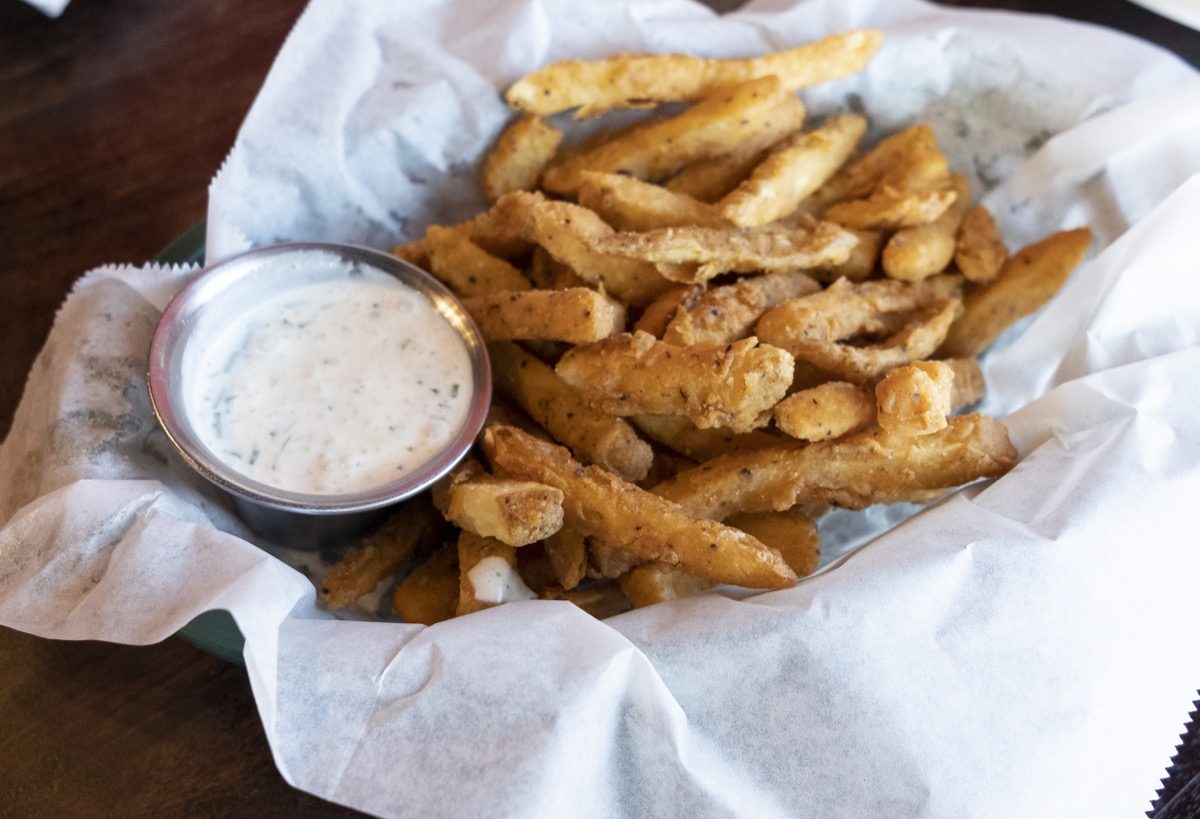 The fried pie bites are also a delightful ender, arriving with cherry, blueberry and apple fillings and served with an almond whip. But perhaps the most surprising and delightful ender at Ester’s is its cavernous game room in the back. This industrial wonderland is full of video games, ping-pong and the exciting recent addition of Skee-Ball. With its garage door facing the alley, and a smattering of college-age gamers having fun, not to mention its veggie options, Ester’s began to resemble some Dickson Street eatery of yore — no counter-cultural sideswipe intended. 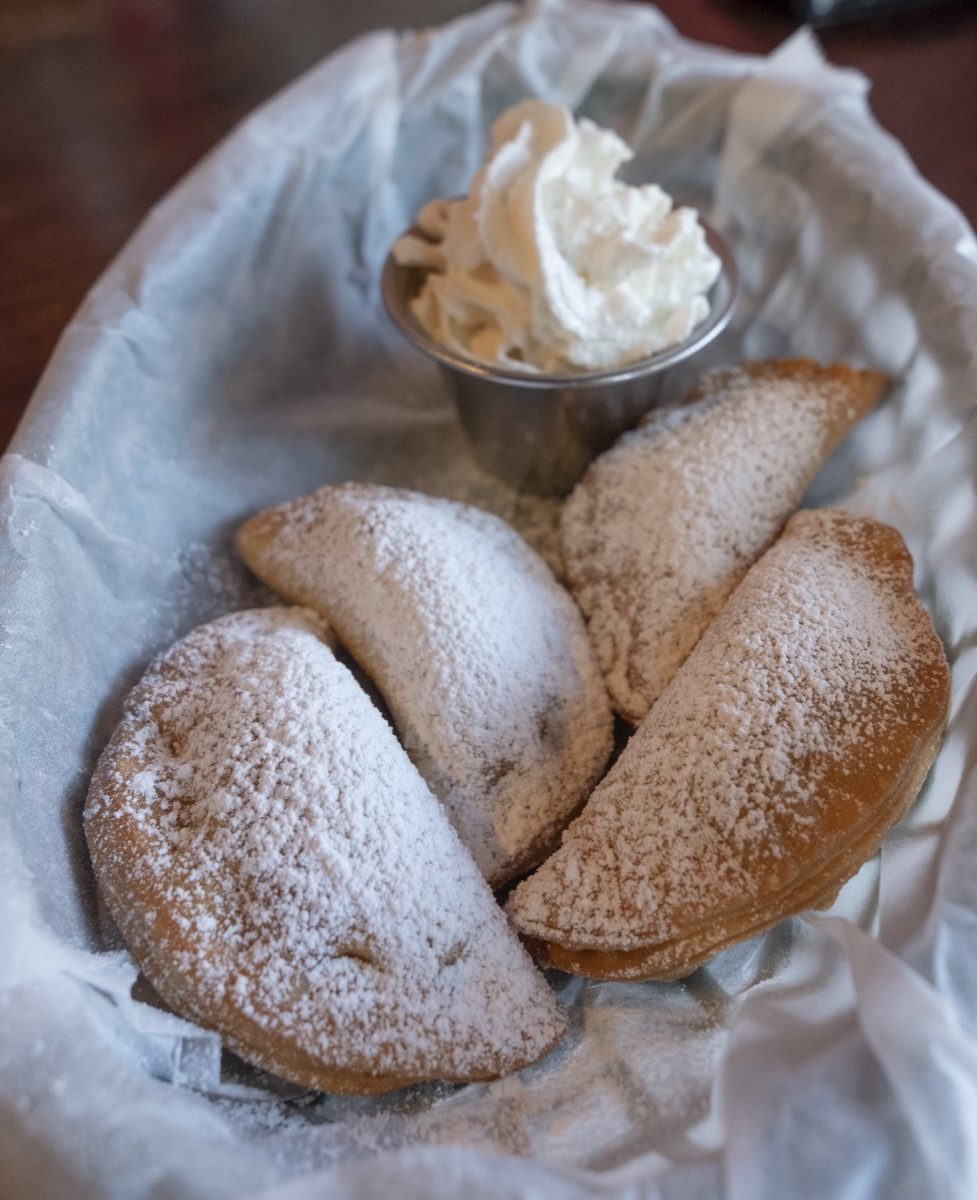 There are still hits and misses with plant-based food acting in the stead of meats — just as we’ve found when being served meats, to greater gastronomic peril.

Alleged consumer confusion has never tasted so sweet. Long may the plant-based option grow in Arkansas.