It’s hard to explain how you’re good at something if it comes naturally. When you ask Sami Lal about his photographic memory and how he is able to remember his customers’ names or their go-to dishes at his restaurant, Star of India, he might not answer the same way each time. He told David Koon for a 2016 article in the Arkansas Times that, “It’s a very tricky system. It just comes to my tongue to say the name.” When I spoke to Lal in July of 2020, he told me that the skill is “a God-given talent I have. Service comes from my heart and I love the people.” When I interviewed him earlier this year, I brought it up again and he said, “When you love somebody, you remember the people.”

It’s an understatement to say that Lal’s front-of-house style leaves an impression. Lal is revered by many in the Little Rock community who’ve frequented Star of India over the years. He’s often referred to as a living legend.

Lal, 65, was born in Nakador, a town in the northern Indian state of Punjab. The second of six children, he took an interest in cooking at an early age. “When my mom was cooking at home, I was watching her all the time,” he said. Lal thought that maybe one day he’d be the one cooking food for people. “The dream’s come true,” he said. “I learned from my mom, which is what I’m using here in my restaurant — same thing as what my mom was cooking.”

Lal moved to Hamburg, Germany, in 1979 to attend cooking school. He started learning German upon arrival.

“I still speak it with some of my customers who are from Germany,” Lal said.

While he was a student, he got his first restaurant job at a place called Dello Pub. “I was very young, I think 19 years old,” he said with a hearty laugh. He started out as a dishwasher and quickly worked his way up to a chef position. He eventually became the executive head chef and trained 18 staff members and junior chefs on how to cook continental cuisine.

Lal finished school and left Germany in 1982. “My dream was to go to the United States and have my own restaurant because cooking was my passion,” he said. “A lot of friends of mine wanted me to come. I said, ‘No problem.’ ”

He moved to Dallas and became part owner of an Indian restaurant there, staying for 10 years. While in Dallas, Lal became connected with Little Rock residents who urged him to open a restaurant here. 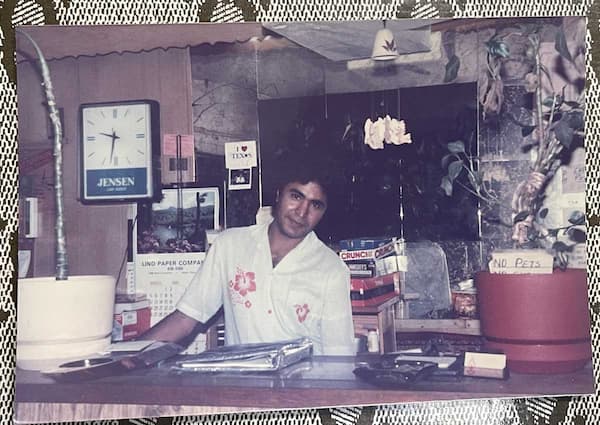 Lal at his Dallas restaurant in 1985.

“They were always pushing me,” he said. “They say, ‘Sami, you should come over to Little Rock. There’s a lot of opportunity over there to open a restaurant.’ ”

Lal met his wife, Suman Rani, in Punjab. They had an arranged marriage and will have been married 31 years in March. Lal said Rani coming into his life was the “best thing that ever happened.”

Lal decided to move to Little Rock after the landlord of his restaurant in Dallas sold the shopping center and gave him and his partners notice.

For an entire year,  Lal would leave Dallas at 4 a.m. on Wednesdays (his day off) and drive to Little Rock to scout locations. “The need was there,” he said. “There were no Indian restaurants anywhere in Arkansas or Little Rock.” He found the space where Star of India is still located, in Westchase Plaza on Shackleford Road, in 1992 and began development. “I built my own restaurant,” Lal said. “The interior, the arches, I painted the walls — everything that would bring the Indian culture and vibe back to the United States.”

Star of India opened in 1993. “It was great,” Lal said of his first year in business. “I received a good blessing from the people of Little Rock and from the Lord. I have always the positive; I never have the negative. I knew I was going to be successful here in Little Rock. You wouldn’t believe it, I still have some patrons who I’ve been connected with since my time in Dallas in the ’80s who still come to dine here in Little Rock. Simply amazing!”

Lal starts every morning with a shower and an hour of prayer. Then he heads to Star of India to start cooking. When guests enter the restaurant they’re likely to hear Lal say, “Welcome home,” before they’re able to spot him in his customary dress shirt and tie. Lal said he wants his guests to feel like they’ve arrived at their home away from home.

“Anyone who comes to dine in or order takeout are my guests coming to my home,” he said. “If anyone were to come to my house, they would get the same experience and hospitality, so why not share it and make it special in my restaurant? I believe that a guest or a patron who comes to your house is like a God — so treat them well. It’s a cultural thing, and I’ve made sure my children respect and follow this through as well.”

Lal’s three daughters, Joyti, Deepali and Shibani, were practically raised in the restaurant, which they said still feels like home.

“We spent every holiday, our birthdays, we would do our homework. … Every day we would be there as young kids,” Joyti Lal said. “It was amazing. We’d get to see what our parents did, what all the other employees did, how the restaurant really worked.”

Along with homework and birthday parties celebrated by the Lal family, Star of India employees and customers who happened to be dining there on those nights, the sisters also played cards and badminton out in the parking lot with a make-believe net. If badminton took place during a slow period at the restaurant, Lal would join them for a game. 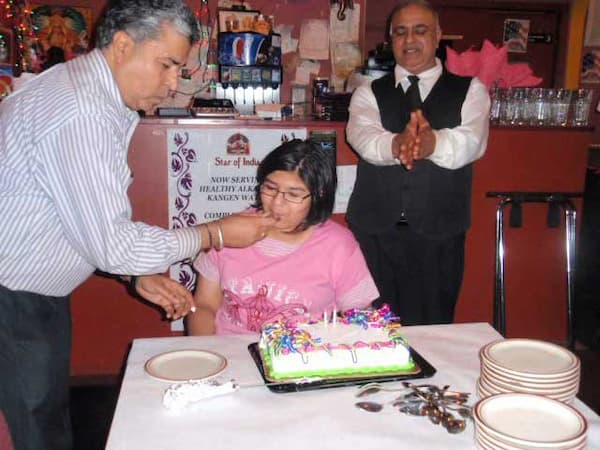 “You have to spend time with the kids when you have a restaurant business,” Lal said. “We threw some ball, play the game over there in the parking lot, you know. My wife was here helping me also, and I say, ‘You stay inside; I’ll go outside.’ ”

As the kids grew older, they began to learn the trade from their father. Their mother also started working at Star of India after staying home to raise them for 10 years. The sisters would answer phones, fill to-go orders and work alongside their parents and the crew. Joyti worked as an assistant manager at one point. The sisters believe growing up in the restaurant around Lal helped prepare them for future success.

“His leadership, the way he trains, the way he talks, the way he prepares you not only for the job at that time, but [for] a longer run,” Joyti said. “We’ve been able to embrace the challenging situations that are not only efficient in managing within the restaurant business, but in other industries as well.” 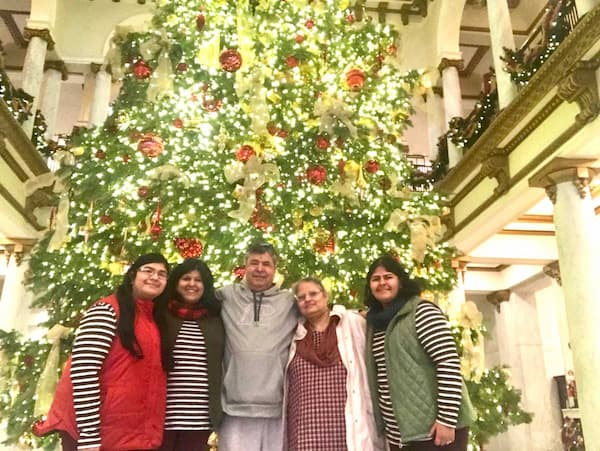 “Yes,” he said. “They are very perfect in the restaurant business, too, by the way. They know what they are doing. The way I take care of customers, they take care of them just like that. I would tell them, ‘You are my photocopy.’ ”

Joyti said, “I think the people in the Arkansas community have blessed him in a way where he’s able to make it personable. It’s not just a customer dining at his place, it’s a long-term relationship.”

The three sisters helped design and market the family meals that Star of India started offering in the days before the pandemic shutdown in mid-March. Shibani said she’s working to “revamp our marketing platforms, promote our family meal packs, run other advertising campaigns, conduct marketing research to do much more to promote the restaurant on various platforms,” she said. She’s also in charge of public relations, sponsorships and charitable events.

Star of India’s award-winning curbside service was provided with the same hospitality Lal and his crew have always been known for. The waiters still dressed up in long sleeves and ties even on hot summer days. They handed out complimentary ice cream to customers waiting in their cars. It wasn’t the same as eating inside, but it felt just as welcoming.

A portion of the profits from the family packs were put toward donations for first responders and health care workers. Lal made the rounds at area hospitals, dropping off food for as many as 100 people.

“I love to do it for them,” Lal said. “If you love somebody, they will love you, too. And everybody supports us, and I support everybody, too.”

Lal’s daughters told me the most common question they get from Star of India fans is, “What is Sami like outside the restaurant?”

“He’s very cool,” Joyti said. “He has that humor. Even during the holidays when we’re together with family, his jokes and his humor always gets me. He’ll find a way to make us laugh and make it a fun and memorable holiday.

“We play tennis and badminton with our dad. We also take turns going on daddy/daughter drives. We’ll have random conversations just to have fun and get away from work life. It feels great to just sit in a car and go … with our dad. That is something I have loved in my lifetime. …

“He has always been our biggest motivator. He wanted us to make our own decisions, he wanted us to be independent [and] unique. That is one thing I’ll always have an appreciation for.”

Lal has seen a lot of progress in the local restaurant scene since he opened in 1993. “The industry has boomed tremendously,” he said. “I was the first one to bring an Indian restaurant within the state of Arkansas. Many different cuisines started to come afterwards, which is amazing as we need all kinds of different ethnic cuisines for the people to enjoy the food experience. Many of our restaurant friends, including ourselves, have been impacted from the pandemic. What kept us going stronger and together is the Arkansas community, our hardworking employees and our families. Things will pick back up for sure after the pandemic,” he said. “I do foresee curbside as a big win and something many patrons will want even when things are settled. Overall, restaurants will be more appreciated in a true sense. We will get through this together sooner or later,” he said.

For many of us that have been hunkered down, making our own food and living off takeout for the past 10 months, we can’t wait for the time when Sami Lal can welcome us back home.