There’s a fantastic new restaurant in Central Arkansas, and it isn’t located in the Heights, Hillcrest, SoMa or Argenta. It’s a fun field trip distance away — about 30 miles east of Little Rock in historic downtown Lonoke, a city of fewer than 5,000 people — where its native owner Gina “Gigi” Cox can quickly name off every restaurant in town that’s not fast food.

Cox grew up in Lonoke and later moved to Memphis, where she stayed for 31 years. Five years ago, she moved back to Lonoke with her husband, Jim Wiertelak, and noticed that the downtown historic area of Lonoke was deteriorating.

“It was just a heartbreaker,” she said. Once she moved back, she and Wiertelak started paying attention to the reasons they’d visit Little Rock or North Little Rock, and it was almost always to visit restaurants. The idea behind The Grumpy Rabbit was to provide locals with a place to eat and connect, but the couple harbored dreams of it becoming a destination restaurant, even an anchor for the revitalization of downtown Lonoke.

This is both Cox and Wiertelak’s first time owning a restaurant. Cox worked in finance and human resources for 25 years, and Wiertelak served as chief operating officer of an insurance brokerage company.

“We have no idea what we’re doing in the restaurant industry,” Cox said. “We just hire people smarter than us.”

They’ve certainly hired a capable executive chef in James Hale, who was the owner/chef of Acadia in Hillcrest from 1999-2015. Hale was nominated for a James Beard Award in 2008 in the “Chef of the South” category, and he was working at the Capital Hotel up until the shutdown last March.

The name Grumpy Rabbit is a combination of Wiertelak’s grandpa name, “Grumpy” — Cox assured me that no one who actually knows him ever questioned the name — and the Lonoke High School Jackrabbits.

The two-story red brick building that houses the restaurant at 105 Front St. is situated in a downtown square that looks forgotten. One of my dining companions compared the new eatery to a scene in the movie “Blast from the Past” in which one piece of the town is in color and the rest is in black and white. The building was designed by Charles L. Thompson and built in 1905 to be a mercantile. Thompson designed myriad Arkansas buildings that are now on the National Historic Registry, including Little Rock City Hall, the Washington County Courthouse in Fayetteville and the North Little Rock Post Office in Argenta (now the Argenta Branch Library). When Cox was growing up, the building housed Lonoke Abstract Company, and it’s housed different businesses over the years: Pickin’ and Grinnin’ Flea Market, a barber shop and a comedy club.

Cox and Wiertelak bought the building in December of 2019 and expected the renovations to take six months. But the pandemic hit, causing delays, and the project was bigger in scope than Cox had imagined. Judging by the before and after photos, it looks like a complete overhaul and a restaurant renovation success story made for reality television. The architect in charge of the project, Ryan Biles, a Lonoke native and city alderman, is the director of development for Thrive, a nonprofit design firm based in Helena-West Helena. The Thrive team did all the branding, graphic design related to the Grumpy Rabbit logo and the typeface. Biles’ wife, Natalie Biles, and partner Stacey Breezeel of Shine Interior Design Studios of Lonoke handled the interior design. “There was really a clear vision from the beginning on the part of Gina and Jim as to how they wanted the restaurant to be a welcome spot for our whole community — basically just kind of space for their hospitality to be extended to the whole town and visitors who come through Lonoke,” Biles said. “So our goal was to really just put their personality in the design, and their vision to do an adaptive reuse project in this historic building was something that spoke to our hearts as designers.” 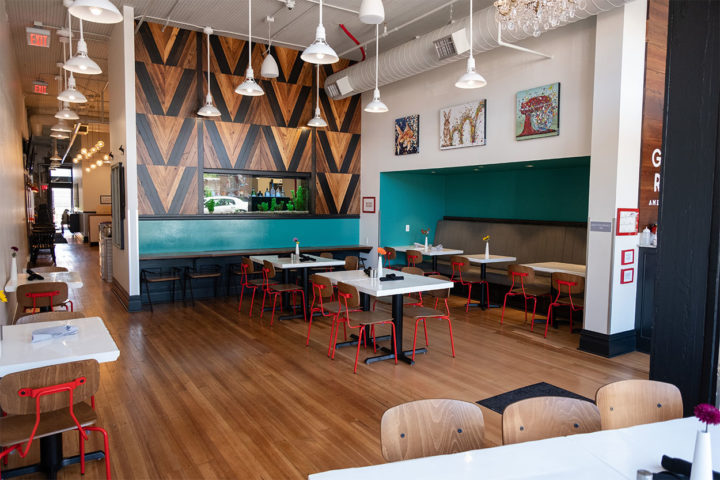 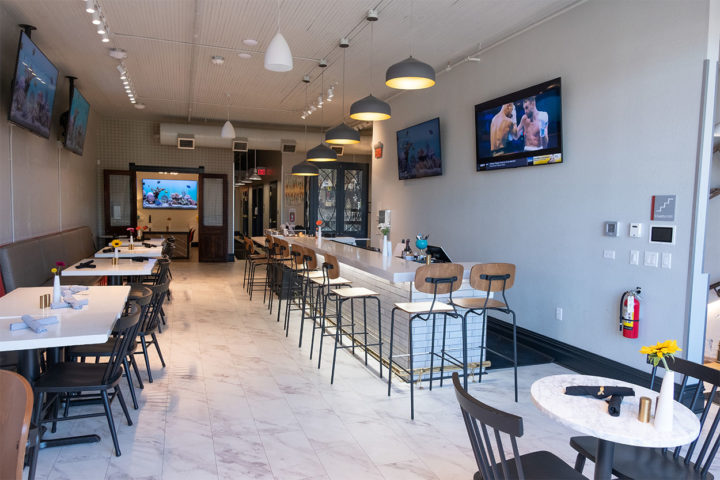 When Cox and I spoke, she’d just signed the papers to have the restaurant listed on the National Register of Historic Places. It’s already on the state’s historic registry.

The restaurant opened Jan. 19 of this year to 66% capacity. Cox said they installed air purifiers on all of the heating, ventilation and air conditioning units. Dividers were placed between tables and the restaurant closed between the hours of 2-4 p.m. every day for cleaning. Cox said they didn’t publish the opening date in January because they just wanted to try it out for a day or two. She said that waiters were successfully flagging down passing motorists to come in and eat. Soon after, the snowstorm hit in February and they closed for 10 days and were forced to cancel a big event she had planned for Valentine’s Day. 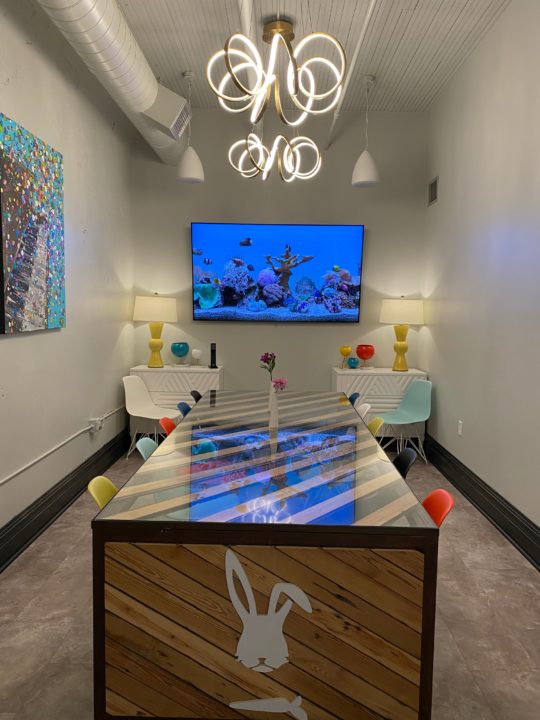 She said that things have really picked up since the weather warmed up and people started getting vaccinated. Masks are no longer required for customers at The Grumpy Rabbit and Cox said they just recently made mask-wearing optional for employees. “Some do, some don’t,” she said. If you prefer to dine outside, call for seating; the patio availability on OpenTable is unreliable. 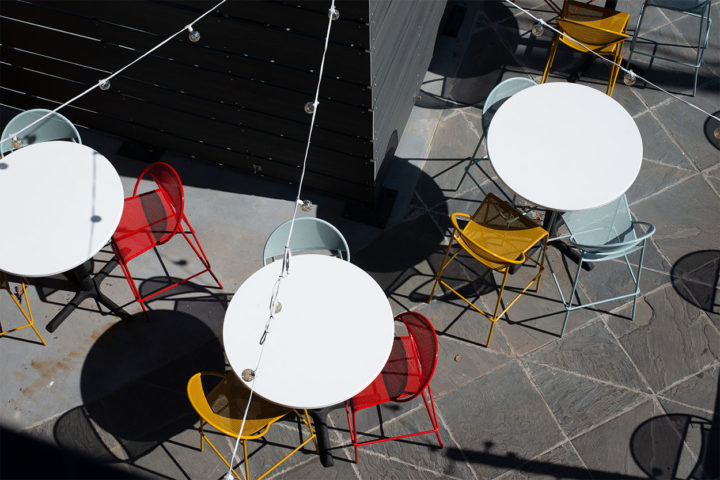 One nod to Lonoke you’ll notice among the modern lighting and hardwood floors: a goldfish aquarium separating the back of the bar from the front room dining area. Lonoke is home to one of the largest goldfish hatcheries in the world, Pool Fisheries Inc. The prominent wall feature above the fish tank is made of reclaimed materials salvaged from the demolition of the older interior parts of the building — not from the original build, Biles said, but from the 1930s and ’40s. 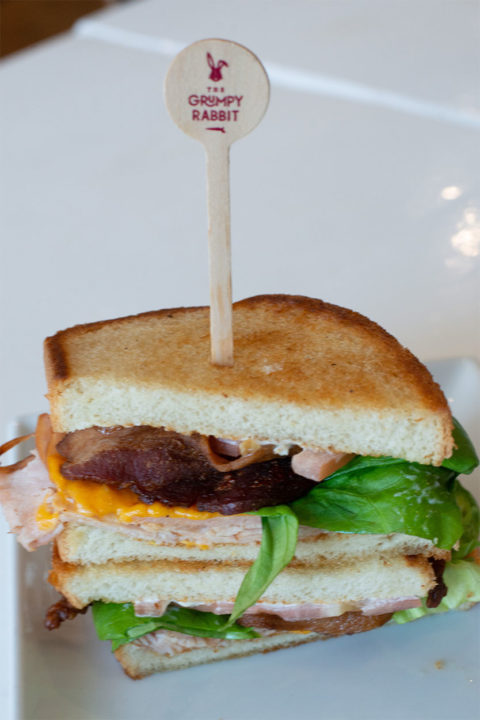 The “Supper Menu” is a blend of American fare with some Cajun influences, fitting because Hale’s culinary career started in New Orleans. We started off with “The Board” ($20), which featured grilled rabbit sausage links with fennel and onion confit, a thick slice of grilled Petit Jean bologna topped with Guinness honey mustard, a house-made savory cheesecake topped with a tomato puree, a smoky egg salad with bacon, crostinis and pickled veggies. The highlight of the board was the rabbit sausage. My friend, impressed, said it wasn’t gamey but obviously homemade, and that he’s never had sausage quite like it.

Our waitress was friendly and knowledgeable about the menu, specials and cocktails, even though she wasn’t old enough to serve them. (She informed us that she’d just recently attended her senior prom.) We ordered one of the specials, the “Redneck Surf ’n’ Turf” —  a ribeye topped with crawfish and a creole cream sauce. From the menu we tried the blackened redfish ($22), with cheddar grits, crawfish and tomato creole cream sauce. We enquired about the short ribs, but they weren’t available that evening, so we settled for the braised chicken thighs ($16) with herbed demi-glace served on a creamy leek orzo pasta.

The ribeye was cooked medium rare consistently throughout, and the crawfish cream sauce complemented it nicely. My friend who ordered the redfish said it was some of the best fish he’s ever had, and it sparked a debate between him and his girlfriend as to which redfish was better, Cypress Social or The Grumpy Rabbit. The chicken thighs were good, but the star of the dish was the creamy leek orzo pasta. Each entree came with a grilled carrot. The dinner menu also features a nice blend of salads and sandwiches, all under $15.

For dessert we went for the chocolate sheet cake ($6). The cake was fluffy and fresh, topped with a layer of icing about a quarter-inch thick, almost like a creme brulee crust but thicker and chilled.

Cox said she thinks word of mouth is starting to spread. She often asks where diners are from, and there’s a map in the restaurant with pins tacked on to guests’ hometowns. She said visitors have come from Little Rock, Conway, Cabot, Searcy and Lake Village. She’s also met travelers from Dallas, Michigan and a couple relocating from North Carolina to Montana. The Grumpy Rabbit’s Mother’s Day brunch was the busiest brunch they’ve had since opening. Wiertelak wanted to do something for all the moms, so Cox contacted a florist in town who made up 80 bud vases with roses for all the mothers. The moms also received chocolate-covered strawberries served in carrot-shaped boxes.

I told Cox that The Grumpy Rabbit is one of the first restaurants I’ve visited since getting vaccinated and started venturing out again. She shared that her father is a part of a longstanding McDonald’s breakfast crew that would meet for coffee at 7:30 a.m. before the pandemic shut it down.

“After they all got double-vaccinated, I was setting up the bar upstairs with Grumpy, and 12 of the McDonald’s crew came in and ate in the conference room, which we named ‘Randy’s Room’ after my deceased brother. And I was sitting there and my dad and all of his friends — who are all in their 70s and 80s — were laughing and carrying on, and I said [that] this just makes all this construction and everything we’ve been through … worthwhile … I love being able to have a place for people to come.”