One refreshing constant over the course of the pandemic is the bustling outdoor dining scene sisters Helen Grace King, Leila King and sister-in-law Kamiya Merrick have cultivated at their modern diner @ The Corner located downtown on the corner of E. Markham and Scott Streets. People have consistently shown up and waited in long lines  —  on the coldest, windiest or dustiest of days, or this past two weeks, when the city was digging up the roads adjacent to the diner allegedly searching for a gas leak — to sit at one of the 12 or so tables skirting the covered entryway of the building that also houses the Arkansas Times. The restaurant announced on Monday that it would be closing for a few days this week to prepare to ease back into indoor dining, which it plans to start on Friday, June 25. We’d conjectured that the temporary closure was a result of the deafening jackhammering a few yards away from the diner tables, but it turns out it was purely a matter of making time to reconfigure the dining space.

“We brunched outdoors for an entire week with jackhammering,” Helen Grace King said. “It was absolutely horrible. It kept us on high anxiety because we were so worried about guest satisfaction. But people were so nice and friendly. … That’s been the whole theme of the entire pandemic. We’ve really seen humankind shine.”

The sisters are planning to reopen slowly at a pace they are comfortable with.

“We’re not announcing it too much,” Helen Grace King said. “We want to get our system down again. We’ve changed a lot … our bar business has bloomed. We went from three cocktails to about 10 throughout the pandemic. We’re going to kind of ease into it this weekend and all of next week and kind of figure out what it looks like again.” The restaurant, she said, is known for being a packed house, often with a wait, and it was important for them to keep diners from feeling too crowded. “I still want people to feel very safe — that’s been our goal from day one of this pandemic. We’ve gone above and beyond to make that happen, so I think we’re going to continue to do that. I feel like we’re ready. I think our community and our restaurant’s done our due diligence and I think that we’re ready to open up indoors.” 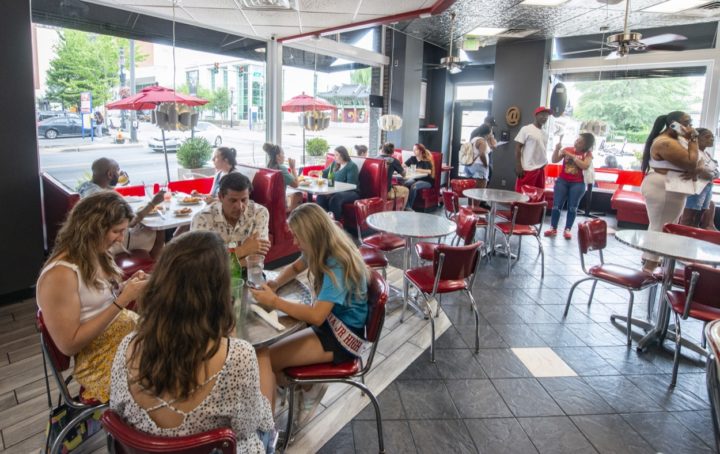 In the early days of the pandemic, @ The Corner started a campaign called Cinnamon Roll It Forward, in which people could purchase cinnamon rolls from the restaurant and then @ The Corner would deliver the pastries to hospitals for frontline workers. Some time next month, @ The Corner is going to have a grand reopening party and in the spirit of coming full circle, they’re going to offer free cinnamon rolls to attendees.

Outdoor dining at @ The Corner isn’t going away, but it will be scaled down.

“I think we’re going to pause curbside this weekend until we get this reorganized,” Helen Grace King said. “We’ve loved our outdoor tables, we’ve loved our patio. We’re going to keep a lot of it. Weekdays will be smaller, weekends, larger scale. People love it, Little Rock wants it.”

“You know during the great snow, people were outside dining with us and our table sanitizer was freezing to the table,” Helen Grace King said. “But they were still there, they still showed up. It was Valentine’s Day, and people came and brunched to celebrate their love, and I was just like, ‘This is love. This is true brunch love.’ ”

The diner gained 6,000 new Instagram followers this past year, something Helen Grace King said she attributes to the restaurant’s community contributions. In addition to frontline workers, donations through the Cinnamon Roll It Forward campaign were also made to shelters, offices, police, firefighters and the Black Lives Matter movement.

The sisters were slated to open their new restaurant, Henrietta’s, located in the former Andina Cafe space at 433 E. Third St., in March of 2020, and the coronavirus pandemic put the project on indefinite pause.

“She’s just kind of chillin’,” Leila King said. “We were hit financially to a great extent, and once that all rebalances, we’ll be able to finish that project. I’ve always wanted to open Henrietta’s with no signs of COVID, full capacity, no masks, you know, not much social distancing — it’s a really small, intimate space, so I want people to experience a brand new concept.”

Putting Henrietta’s on ice takes patience, something the sisters clearly have in spades. When many of their restaurant peers were reopening during Phase 1 of the state’s COVID restrictions on dining capacity, @ The Corner held off until two weeks into the Phase 2 reopening last June, one year ago.

“We waited two weeks to see if numbers spiked and what not,” Helen Grace King said. “And then we kept it secret for two weeks after that — just told our regulars and people that called and then we announced it. Because we had orders coming in from cars, phone, door dash, online ordering. Orders coming in from five different ways — that’s a lot of moving pieces that we needed to be able to connect flawlessly.”

“We did, we figured it out,” Leila King said.

“Now we need to re-re-figure it out,” Helen Grace King said. “We really like the system we created outdoors. I’m a systems person, so I like creating systems, and now we have to recreate this one.”

I wished the sisters luck and excused myself, knowing I’d taken up enough of their time. “I know you’re busy,” I told them.