“DJ Paul” Webber is not a morning person. But for the past 17 years, weekend mornings have hummed by to the soundtrack of his spontaneously queued playlists for Blues Saturdays and Smooth Jazz Sundays on KOKY-FM, 102.1. As long as he can remember, the sounds of jazz and blues — “People relate to blues because it tells a lot of stories,” Webber told this reporter — have bookended weeks for KOKY listeners.

Webber reports to the studio with an arsenal of CDs. He’s collected them over years of Friday paychecks, chipped away at by subsequent trips to local record stores. As the minutes of Webber’s show tick by, those albums get spread across his broadcasting table. Every song he plays gets written down into a notebook Webber maintains of his own accord, scribbled in chronological order from the top of the radio hour. If listeners come calling about the name of a song, he reasons, he wants to be able to give them a title, and to remember what’s come before.

In 1956, you could tune in to 1440 AM — what listeners called the “ebony spot on your dial” — to hear KOKY, referred to then as “The People’s Station,” broadcasting just blocks away from Central High School. Some years later, in the late 1970s, programming moved to 1250 AM, and the radio’s catch phrase became “the Sound of the City.”

Today, some of Little Rock’s oldest urban sounds emanate from a room in West Little Rock just off of Chenal Parkway. Yellow banners on the wall bear KOKY’s curly lettered logo and a descriptor that accurately distills its past: “legendary.” With an ebb and flow between frequencies and forms in its 63 years, KOKY is a time capsule of black voices against the backdrop of Little Rock history. “[KOKY] has changed with the times, but it hasn’t left its roots,” Webber said. “It’s still there.”

KOKY did disappear for a number of years in the 1980s after its call letters were bought and used by a Sherwood gospel station. So when Citadel Broadcasting decided in the ’90s to revive its Urban Adult Contemporary presence on a new frequency, longtime radio presence and director of programming at Cumulus Little Rock “Broadway” Joe Booker said he felt that the KOKY letters “would be perfect” as a marker everybody knew and loved. He was adamant about finding where the letters were being used and resorted to lots of digging, with the help of a lawyer, to trace them.

Eventually, those discarded call letters were found, unclaimed, in a so-called “dead letters” file, abandoned and forgotten after the gospel station went off the air. KOKY formally returned to 102.1 FM when Citadel purchased the rights to the call letters and revived them from their place among the discarded. KOKY began airing again on New Year’s Day 1998, a revival marking both a slight deviation from its AM past and a kind of homecoming. Now, KOKY carries forward its legacy as Arkansas’s first radio dedicated to all-black programming and an Urban Heritage station, broadcasting as a city-grade station with an effective radiated power (ERP) of 4,100 watts.

Ask folks who came of age from the late ’50s to the ’90s in Little Rock about KOKY, and memories flow. A recent Facebook post in the group “Remember in Little Rock” by KOKY Program Assistant Kimberly Armstrong-Smith received 82 comments with nuggets of history. “Super soul brotherhood. The baddest sound in town,” wrote one user. Another user commented that they “grew up on the blues on KOKY,” while another person says they viewed it as “our only real radio.” An old slogan, as remembered by one listener, went: “Everything’s okee-dokee at KOKY.” Commenters say, too, that tuning in was a balancing act in and of itself: “You had to get the line just right on your radio dial to prevent static.”

KOKY celebrated its legacy at a Central Arkansas Library System/Arkansas Sounds event Feb. 22, bringing together DJs from its earliest days, former program hosts, devoted listeners and current personalities. Eight people sat shoulder to shoulder on the stage at CALS Ron Robinson Theater, where they paid tribute to mentors, beloved radio voices and their memories — some long buried — of lifetimes passed listening to and working at KOKY in its different iterations. An infamous Easter broadcast story in which eggs, hidden the night before at MacArthur Park, were all stolen, was shared with great laughter and affection, and the echo from attendees was one of recognition. “To see what was able to happen with KOKY, at that event, it kinda shows that to say that people don’t care about the past is not right,” Booker said. “People do care.”

KOKY served as a beacon for black listeners from its beginning in 1956, establishing itself as a source for music, updates and community that African Americans in Little Rock — and across the state — couldn’t get anywhere else, particularly in the limited media landscape for black listeners in the mid-20th century. KOKY joined a slew of other race radio stations in the South, following in the footsteps of the country’s first black-oriented radio station, WDIA, founded in Memphis in 1947.

Amid the turbulence and racial tension of the civil rights movement, KOKY was a bastion of black voices that catered to its listeners as a resource for safety and community care. As KOKY Program Director Mark Dylan, who began shadowing at the station as a teenager in 1978, put it, the station in its early days could be described as a “peace whisperer,” a medium that kept the black community calm and together during trying times: “Radio in those days was not a corporate venture like it is now. You got into neighborhoods, you hugged babies and you kissed wives and you did a whole lot of things that you really don’t do nowadays.”

On radios in many black homes throughout the South, DJs and hosts used code words to communicate about where listeners could find reliable car rides, share locations of demonstrations or warn listeners about police blockades. “KOKY kind of gave us that voice, so to speak,” Webber said, “when we couldn’t necessarily vent for ourselves. But KOKY could vent for us.”

KOKY was a hotbed for both musical and on-air talent, too. As a Central High School student, Al Bell cut his teeth as a DJ before going on to become an executive and producer at Stax Records during one of its most celebrated periods. In the early days, the station had a tall window pane where curious listeners on the outside could watch DJs working records on the turntables. People would gather to dance in front of the glass, recalls KOKY Religious Director Deacon Alvin White in an interview for the 2016 documentary, “The Legendary Sound of the City,” “and it was just great.”

Back then, KOKY also had programs for youth listeners. The station’s first female DJ, Little Rock school teacher and poet Tillie Ingram Bogard Smith, hosted a show called “TIB’s #TwilightTime for Children,” back when KOKY was on 1440 AM.

KOKY also distinguished itself by showing up for its audience. Though it was originally a commercial station, the station was much more characterized by its nature as a mom-and-pop radio venture and responded to its community’s need as a megaphone for collective help, helping listeners find rides to school or the polls and running food drives or clothing drives. At some points, KOKY paid people’s bills and bought houses, former program director Larry O’Jay said.

When Martin Luther King Jr. came to Little Rock in April 1963 — just four months before the March on Washington and the delivery of his iconic “I Have a Dream Speech” — most churches weren’t interested in hosting him. But White said that he and others at KOKY “built it up big” and supported MLK’s speech at the First Missionary Baptist Church on Gaines Street. Years later, after King’s assassination in 1968, the station chartered three buses to take people to the memorial service in Memphis. 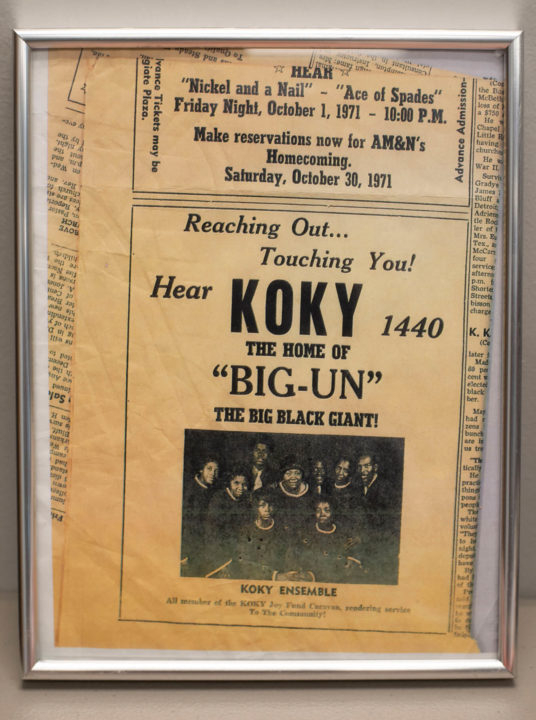 Today, KOKY persists in its longtime role of programming around the collective ears of its primary listeners, riding out shifts in ownership and the massive consolidation that flowed from deregulation in 1996 to continue doing in large part what it’s always done: queue up R&B, gospel, jazz — and now, hip hop — via radio personalities whose voices reach much farther than their shows.

“I know if you walk into any black business, they’re going to have either KOKY or Praise [102.5 FM] on,” said Carmen Bradford, urban web content manager at Cumulus Little Rock who made the “The Legendary Sound of the City” documentary in 2016. “I think KOKY is like the backdrop of most black people’s lives. If you go to a barbecue, KOKY is playing. Any barbecue, church event, it’s going to be in the background, because it’s our music.”

Annual KOKY-led events such as the statewide, often multimonth Jammers Power 92 charity basketball team games, live broadcasts and interviews with community members at the Watershed Social Hospital in December, and two-day fundraisers for children at St. Jude Children’s Research Hospital — which raised $17,000 in two days — carry on in the same spirit today.

KOKY continues to provide a space for community members to call in and speak, particularly on the weekly Thursday morning talk show program with Booker. Generally, three guests appear on each show and are curated around a particular theme, booked about one month in advance. On March 28, for example, Booker hosted guests from the North Little Rock School District to discuss school choice from the perspective of current students. For Booker, this open-ended discussion format is the epitome of radio, aligned with three rules he keeps in mind: “Radio should entertain, inform and encourage you to be involved in your community.”

When Sonta Jean “The KOKY Queen” makes an entrance on the airwaves at 9 a.m. each weekday, she can rely on a call from Bobby Prescott, who took up KOKY as his go-to station in 2005 after relocating to Little Rock in the wake of Hurricane Katrina. Fourteen years have passed, and she’s eaten his gumbo and he’s been to her church. She’s appeared in another listener’s wedding. “We have cried together, prayed together on the radio,” Jean said. “That’s a trip, too, because it’s amazing what people will reveal in a call to the radio [host]. Sometimes they just want to talk.”

Jean endured two operations in 2016 after suffering a brain aneurysm in June of that year, and she cites her community of listeners as an aid on her recovery. “Some of these people really become your family. It feels like family,” Jean said. “I feel like I’m working for my sisters, and brothers, and aunts. You get what you give and I love music. I truly love what I do.”

Toward the end of his shift during our visit, “DJ Paul” leafed through his CDs. That day, he’d selected Marvin Gaye as the artist of the day in recognition of the anniversary of his death the next day, April 1 — a day that Webber says he’ll never forget. He chose to play a few songs by Gaye every hour, and received a call from a listener about a Gaye tune she’d like to hear. In the meantime, albums accumulated on his desk. He returned his headphones to his ears and leaned in toward the mic.

“It’s a beautiful thing. You’re doing something that you love to do,” Webber said. “There’s so much music out there. You’ll never be able to play everything.”