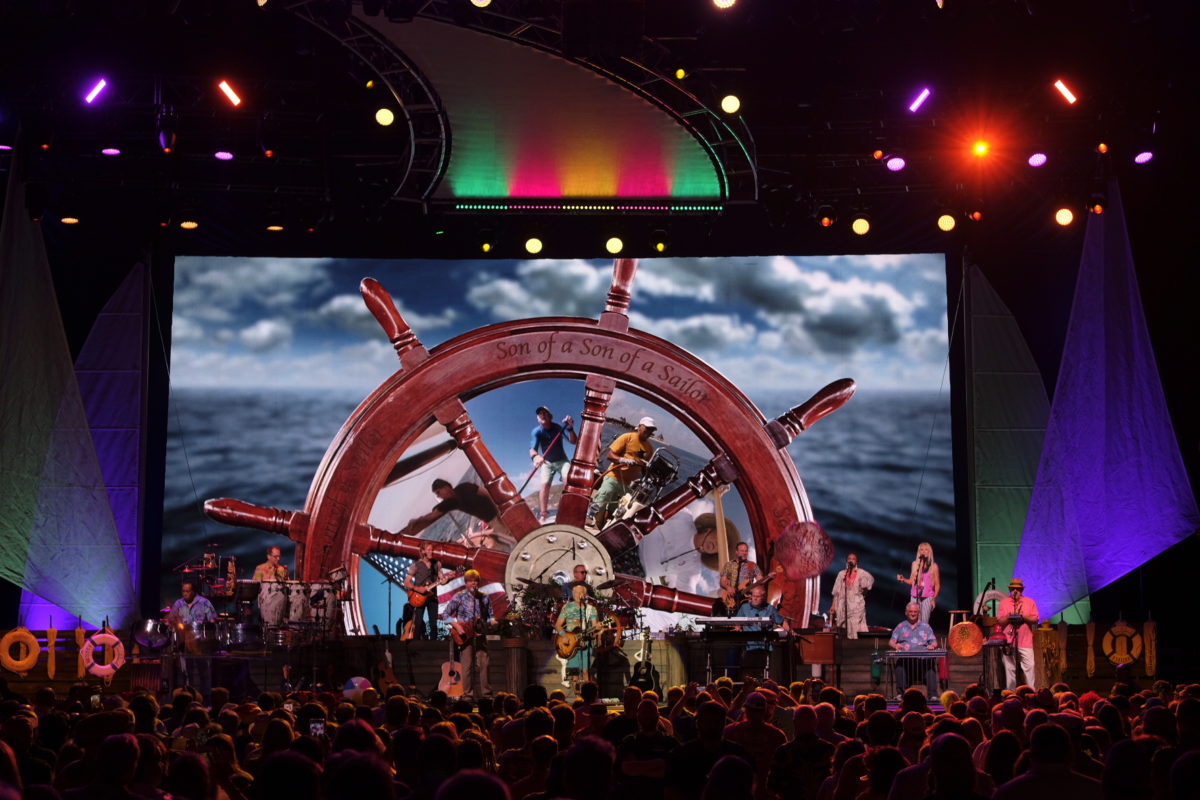 The Parrotheads were out in force Thursday night in North Little Rock.

In case you’re not familiar with this subspecies, they adorn themselves in parrot paraphernalia, fin finery, tropical print shirts, shorts or jeans and flip-flops. They guzzle margaritas and beer and flock to hear their hero, the ageless Jimmy Buffett, in concert.

A whopping 13,928 them — many, we must note, more sedately attired — were in top form at Verizon Arena. The affable Buffett and The Coral Reefer Band were, as well, for the Central Arkansas stop on their “Son of a Son of a Sailor” tour.

While it was thundering and raining and flooding outside, it was all good times inside, from early songs like “License to Chill,” “Stars on the Water” and “Volcano,” to an encore more than two hours later that included “We Are the People Our Parents Warned Us About” and “Love and Luck.”

“We’re a lucky band of goofballs who get to do this for a living. We’ve had a great run for a long time because of people like you,” Buffett told his fans. And he’s had those fans for a long time because of great songs like his signature “Margaritaville,” and “It’s Five O’Clock Somewhere,” the rowdy ode to leaving work behind and heading to happy hour — whenever you choose to celebrate it — that he and Alan Jackson turned into a country smash hit back in 2003.

In checking with some fans, it became obvious a good number of them have seen Buffett time and time again over the years.

“We’ve been to three of his concerts … still high energy and as much fun as 30 years ago,” Anthony Bennett said. “The people-watching is as great as the music!”

Mark Zoeller has seen Buffett concerts in Las Vegas, Memphis, Austin, Key West and Maui and enjoyed seeing him again last week. “It brought back a lot of memories,” he said. “It was very uplifting. It’s the kind of music that puts you in a good mood.”

In a concert filled with crowd-pleasing numbers, other standouts included “Come Monday,” “Cheeseburger in Paradise,” “Fins,” “Changes in Latitudes, Changes in Attitudes” and “Why Don’t We Get Drunk and Screw?”

While introducing the Coral Reefers, Buffett pointed out to loud applause that keyboard player Michael Utley is from Blytheville. The musical director of the band and a graduate of the University of Arkansas, he’s been with Buffett since the ’70s.