It’s official. “Minari,” the acclaimed new film from director and former Arkansas resident Lee Isaac Chung, is nominated for a Golden Globe — in the Foreign Language category. And for many, that’s a problem.

Chiefly, the categorization as a Best Foreign Language Film contender effectively shuts the movie out from a Best Picture bid, despite the fact that other non-English movies like “Inglourious Basterds” (2009) and “Babel” (2006) were not wedged into the foreign language category, leaving their chances at Best Film categories (Best Drama, Best Musical/Comedy) intact. (“Babel” won Best Film at the Golden Globes that year.)

“Minari” is partially in Korean. There are some subtitles, but there’s also a lot of English. The Hollywood Foreign Press Association stipulates that films in the Best Foreign Language category must have “at least 51% non-English dialogue.”

But here’s the thing: “Minari” was made by an American director. It’s set in Arkansas and was filmed in Oklahoma. It’s being hailed as a quintessentially American story.

Variety, earlier today, called the Golden Globes’ “Minari” snub a “bizarre decision.” In December, when the Golden Globes confirmed that “Minari” would indeed compete in the Foreign Language category, actor Daniel Dae Kim called it “the film equivalent of being told to go back to your country when that country is actually America.” Director Lulu Wang, whose movie “The Farewell” was similarly snubbed for using Mandarin dialogue, had this to say: 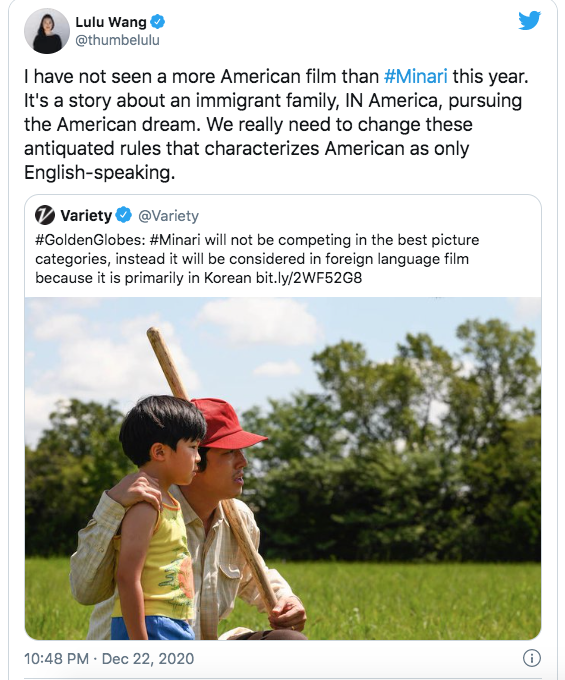 Set in Washington County — Chung’s own childhood home — “Minari” tells the story of a Korean-American family who move to the Ozarks in the 1980s with dreams of starting a farm. The film won people over big at Sundance 2020, securing both the audience award and the grand jury prize for drama. Check out our interview with Chung here.

Chung explained the film’s categorization in an interview with Vanity Fair, attributing it as a choice film distributor A24 made early on:

“From what I understand, that decision was made from the studio side as they were submitting the film, because they had had an experience with The Farewell.”

… . “[They had suspected] The Farewell was not going to qualify for best picture, as a drama or a comedy, and it had to be in the foreign language category. So, they decided that we needed to do the same with Minari, that there’s no choice available for us otherwise.”

A film submitted as a foreign language entry to the Globes cannot also be submitted for other best picture categories, according to Hollywood Foreign Press Association rules.

“I’ve been giving it a lot of thought, and I understand the pain that people feel in this whole thing. Because growing up as an Asian-American and growing up as someone who is not white, oftentimes in this country you can feel as though you’re a foreigner, or you’re reminded of being a foreigner, even though you’re not. Even though inside, internally, you feel completely American,” he said. “This is home.”

“Minari” was also noticeably absent from any of the Globes’ acting categories, perhaps most conspicuously Steven Yeun (“The Walking Dead”), whose performance as the family patriarch Jacob was expected to receive a nod, and Youn Yuh-jung, who plays the family’s feisty grandmother.

“I don’t want to demonize the Hollywood Foreign Press. I feel like they’re trying to award films and celebrate cinema. And at the end of the day, that’s a good thing. What they’re trying to do is a good thing, and they’re not bad people,” he said. “I think it’s more indicative of what cinema has been like in America for the past so many years. Any time there is a film in a ‘foreign language,’ in Spanish or Korean or whatever language, it’s usually not an American film. It’s usually from another country.

“So, there aren’t that many films that are actually being made in America in languages that are other than English. I think that’s why these categories have kind of formed. And it’s not just up to the Hollywood Foreign Press. It’s just the entire culture. It’s the filmmakers, it’s the studios. It’s the people who are watching films, the choices that they make and the types of films that they watch. We need to keep showing that the categories that are there are not necessarily fitting to the reality of who we are as human beings.”