Either my ear is hardwired to love it when musicians mix the beautiful with the bizarre, or I’ve come by that affinity through experience. A good look at all the Bjork and Zappa and Ween in my playlist track record bears witness. Maybe that’s why I stopped cold during the chorus of the first song on Joe and The Feels’ debut album, grabbing the CD case and thinking to myself, “Is he saying ‘Put some beef on it?’ ”

Turns out, that’s pretty much how it went in band rehearsal, too. Frontman Joe Yoder, as singers are wont to do, filled in some scratch lyrics while practicing a developing song’s refrain, thinking the words would come to him later and, in the interim, singing what came to mind. “Put some beef on it,” if you ask me, ended up being a perfect tagline for a song that tussles with ideas about mental health (or our American penchant for ignoring it), and about the ceaseless demands that capitalism and consumerism make of us. The lyric stuck. Check it out, accompanied by Yoder’s own video work:

“Beef” and the rest of the tracks on “Unsupervised,” like Yoder’s music with Little Rock outfit The See, are the sort of melody-driven pop rock anthems made for howling along to in a sweaty circle of friends at a concert — were they not concocted in a concertless era. “Unsupervised” is buoyed by some sparkling and versatile keyboard work, gorgeous guitar tone and by Yoder’s candor about his own life’s trajectory, which intersected with music over the course of the last few years as Yoder obtained his license to practice therapy under the supervision of colleague-turned-bandmate Dave Hoffpauir. We talked with Yoder about becoming a family man, about building a new band during the pandemic and, inevitably, about beef.

When you’re not playing music, you’re a clinical therapist at Behavioral Health Center of Arkansas. How’s work been this last year or so?

Uh … stressful? [Laughs.] We actually opened a new clinic right before the pandemic happened, so it was me and two other therapists in this office, and all of a sudden, we were working from home. But I just came into the office anyway, into this empty space, for like, a year. It felt like “The Twilight Zone,” just working in this building alone. Or like an apocalyptic movie. But it’s been very busy. I’m glad things got going with telehealth, and I think they’re going to keep that extended and going. And that’s good for rural Arkansas. I see a lot of Medicaid clients who maybe don’t have the means to just drive from wherever. It’s a game changer.

I remember the first day I came back in, I was thinking, “I gotta do therapy through a laptop. What’s this gonna be like?” And I was so nervous. A week into it, I didn’t even think about it anymore. It just became so normal. But I do love seeing people in person.

I bet. I’ve loved seeing my friends’ whole faces. It’s such a part of our expression — you’d think it’d be all in the eyes, but it’s not!

That’s right. We can’t read each other. 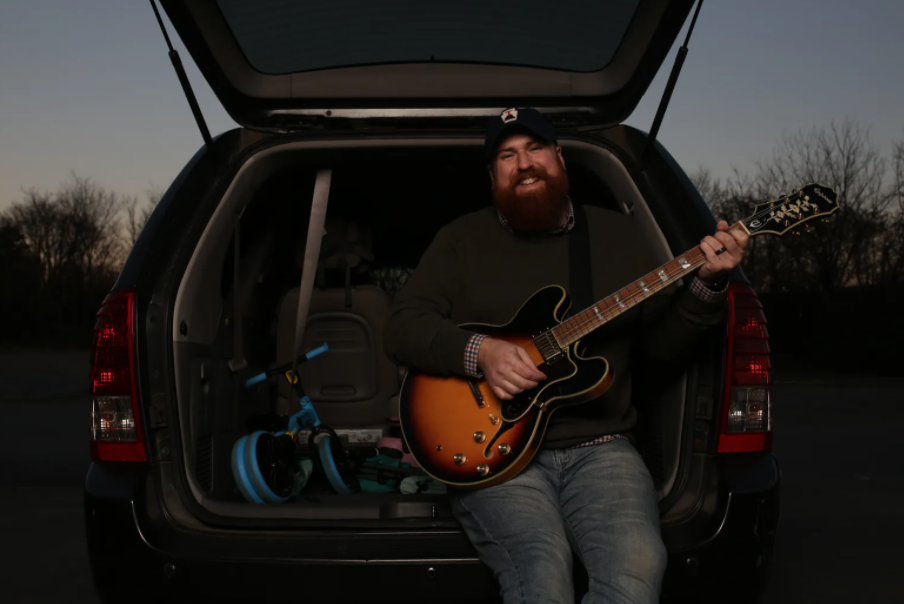 So I know that the band was just getting started when the pandemic hit. I mean, it feels like there’s this part of everyone’s story that’s like, “And then COVID hit.” But you guys had just played ONE show, right?!

I think we did. We played a show at White Water with Isaac Alexander, and the funny thing is that because there are so many medical professionals in our band, there were all these doctors down at the show, and we were making comments about COVID, like, “Wow, what’s gonna happen, and how soon?” And it was the next week when everything changed.

So people have noted that this album grapples with ideas around mental health, but I wonder if it’s more accurate to say that it grapples with our willingness to suppress our mental health. Is that part of what the band name is about?

The album itself is, since I write the songs, there’s a lot of me in it. And after The See ended, I had this period where I had no outlet for these songs. When I became a father for the first time and then I switched careers, there were all these different parts of that story in those songs, but ultimately mental health has become such a large part of my life. And a large part of the band in general. When Dave and I would do our supervision, we’d have these traditions of doing our supervision over nine holes of golf when there was nowhere else to go. It was mental health-related. We needed an outlet. And the band became that outlet, and the more we talked about what the band meant, and trying to be intentional about it, it became Joe and The Feels.

I want to ask about the video for “Beef.” It really helped me understand where the song came from, which to me seemed like a place of looking at American folly and shortsightedness, and the way we put Band-Aids on things that are gushing wounds. Is that it? Can you talk about the song lyrically?

It’s so cheesy, but to me, the song made this image in my head of cheeseburgers and America and capitalism and the history of race, and all these things we struggle to try and figure out. It’s just beef. What is America, and how do we try and resolve problems? Anxiety and depression and self-doubt. That’s the kind of thing we think about as social workers all the time.

At the risk of being ageist in my framing here, the album feels to me like it couldn’t have been made by a bunch of 20-somethings, maybe especially in the more tender moments, like “Our Story” and “The Bear and the Wolf.” I know you’re 37, and I understand you have a family now, and I wonder how your approach to playing music has changed, or if it’s changed, from your work with The See?

Definitely a way different person. I always joke with my clients that I would not want to hang out with my 20 year-old self. Not that there’s anything wrong with that person, but we just have such different worldviews and different ambitions, and I think that comes out in the songwriting. I was showing Bridgey — Bridget, my oldest daughter, she’s gonna be 6 in June — some songs by The See and she was, like, “Dad, I like this way more! This rocks!” And I guess we were a little louder and a little faster. But there’s way more intention now in the words I’m saying, because I have a way stronger grasp on what I feel towards the world. And I guess having a wife and two kids and ore life experience definitely helps with that. Going to grad school for social work helped, because you had to write so many papers and really examine your biases and what you feel about your past. It really makes you look toward the internal, and that affects the music.