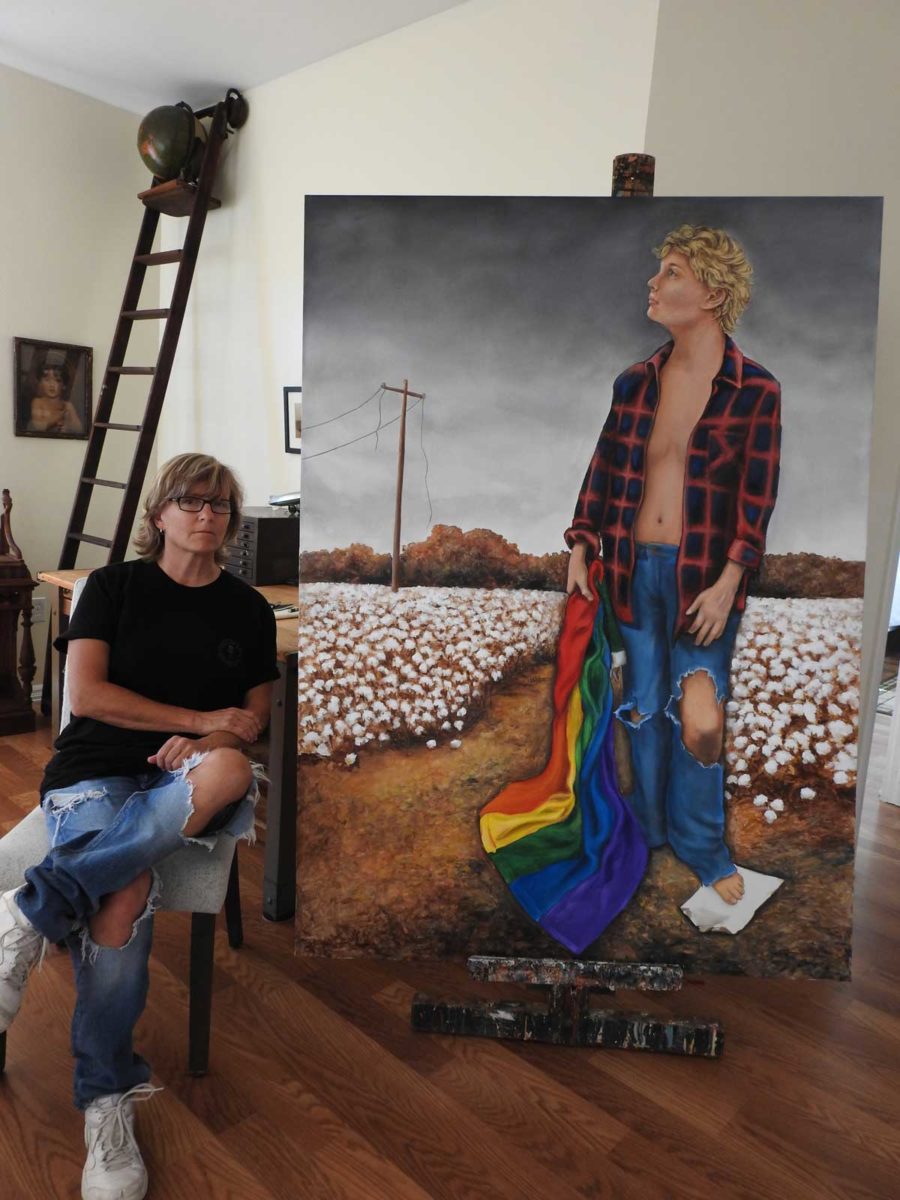 ON ARKANSAS, FROM PEEKSKILL: V.L. Cox poses with a self-portrait, titled “Escape Velocity.” The paper under the foot in the painting, Cox says, “represents the cruel, discriminatory bills against LGBTQ+ the Arkansas Legislature passed this last session.”

V.L. Cox became internationally known back in 2015 for her “End Hate” installation series challenging entrenched racism and homophobia. She traveled with it across the country in the coming years, while also taking new commissions relating to social justice and this nation’s history of oppression. At the start of the coronavirus pandemic, however, she evacuated the East Coast and spent a year at the St. Joseph Center in North Little Rock. Back in April, upon being fully vaccinated, the Louisiana-born and Arkadelphia-raised Cox left her digs at this former Roman Catholic orphanage and departed the state once again for an artist colony in Peekskill, New York, located right on the Hudson River, just upstream from New York City proper.

What’s a country gal like you doing up in the greater New Yawk City metropolitan area? Are you in exile?

Ha. It feels that way sometimes. I was actually on a list for a live/work studio before COVID hit, so the “lost year” pushed my plans back a little. That being said, though, besides growth and opportunity, the unnecessarily cruel 2021 Arkansas legislative session definitely influenced my decision to relocate. We lost all the ground that we gained in 2015, plus some. I’ve been traveling the country for almost six years now fighting this type of discrimination, and I’m not that young anymore. I deserve to have a life and be happy. I can continue the fight from afar while gaining new friends and allies.

A friend of mine once said that Arkansas was like an abusive spouse. You come back thinking it will be different this time, but it never pans out. Do you identify with that?

That’s probably the most accurate description I have ever heard. I returned to Arkansas from Richmond, Virginia, when the national exhibition tour came to the Delta Cultural Center for the 100-year anniversary of the Elaine Massacre. After living on the East Coast, returning to Arkansas was like stepping back in time. The familiarity was comforting, and it was good to see family and friends, but I didn’t realize how much I had changed. I was even encouraged by several individuals to “just try to be a good girl and not rock the boat” while I was back. It’s hard not to judge, but I’ve come to realize that fear and complacency are an easier chosen path for some.

Despite the ways of the South that do not fit within my worldview, I do care about Arkansas a great deal. If I said, “No, really, there are good people there and it’s a beautiful state,” once, I’ve said it a thousand times when people find out where I’m from. I’ve had CEOs of billion-dollar international companies come up to me at events and art openings over the past few years and say, “I’m very concerned about what’s going on down there.” They don’t care if Arkansas is a beautiful state. They don’t care about sports. They care about how people are treated and where to put their next multi-million-dollar business expansion. They care about their investments and their reputation.

Oh yeah. I’ve heard, “Well, you left. You don’t have any right to say anything about Arkansas” so many times I’ve lost count. My response is this: I believe in transformation. With education and connections to people different from themselves, the people of Arkansas can grow and come to understand that there are other ways to be relevant in the world. I may no longer live in Arkansas, but my heart and memories will always be there. I believe it has some of the top talent in the country, and I want it to grow and mature and show the world its full potential. That is the Arkansas I believe in. And you don’t have to live in your state to fight for it. A great number of people have to work elsewhere to advance and make a decent living. Alienating people who honestly care, and who have given their all to try and help, is defeating the cause.

As far as New York goes, I’ve only had one instance where an elderly gentleman looked at some of my work at an exhibition and said, “Arkansas? Isn’t that one of those hillbilly states?” I replied, “No, but didn’t Donald Trump come from here?” He looked at me for a few seconds with a scowl on his face and said, “Touché,” then walked off. Everyone else I’ve encountered has been warmly welcoming. In fact, you’d be surprised at how many Southern transplants I’ve run into up here.

Are we going to come out the other side, or are we in for a long spell of darkness in this country?

We’re going to come out of it. I know this. The hardest part of all of this is the level of patience needed for change. Waiting for the arc of the moral universe to bend towards justice sometimes makes a jar of dripping molasses look like it’s breaking the sound barrier, but it does happen.

You were holed up for about a year at the St. Joseph Center there in North Little Rock. How was that experience? How did being there challenge or nurture you creatively?

I can’t say enough about the St. Joseph Center. When I returned to Arkansas, I was so tired. After years of giving everything to the current movement, I had nothing left over for myself. I was exhausted and extremely burned out. The first place I went to when I returned was St. Joseph’s, where I have kept a studio off and on for years during my travels. Sandy DeCoursey walked out, gave me a long hug that I will never forget, and told me that I would always have a place there to rest and to work. She then immediately put me to work helping on the farm with chores and responsibilities. I needed that structure and discipline in my personal life along with my rigid studio schedule. I can honestly say it saved me.

Activism is not for the weak at heart. It’s grueling, at times unrewarding, scary, and it’s all consuming. It changes you forever because you don’t belong to yourself any more. You belong to humanity, and after that protective veil is lifted from your eyes, and you see people and the work for what they really are, you are never the same again. I don’t think that’s a bad thing and have zero regrets, but if you don’t have a strong support system behind you, it takes a toll. If you ever want to see goodness, I mean true goodness, go take a tour of St. Joseph’s. Volunteer. It’s like working in the Garden of Eden with beautiful and kind individuals. Being there during COVID was a serious but healing time for me. Creatively and personally. I’m a better person for it.

Oh, and I would also like to mention: St. Joseph’s does not receive any funding from the [Catholic] Diocese. The St. Joseph’s Center has a long-term lease to preserve the historic building and serve the community through a thriving urban farm, art studio rentals, and dance and writing workshops. Contributions are needed and appreciated.

The writer Ellen Gilchrist once said that she could only really write in Fayetteville. She would travel all over the place, but only in Fayetteville was she able to sit down and actually compose her work. Now, you’ve lived and produced art all over the map, but do you find that different environments bring out specific qualities in your work?

I get that. The South is where I have created my best work. The ongoing shame and repression towards change and progress by a large portion of the Bible Belt floods you with defiance and historical flashbacks of the best and worst of the area. Oftentimes, that transfers into creativity. I’ve always said that the arts are a different language. As a creative, our work is our loudest voice. However, I would like to say that after leaving the South again and moving to Peekskill, I have felt this overwhelming sense of peace lately. I thought I was getting sick. I don’t remember ever feeling this way before. Life is not as hard. I feel calm, welcome, extremely blessed and peaceful. I love myself again. I don’t believe this will influence my creative interests to where I don’t continue to address white supremacy, etc., but it will help me stay healthy, happy, and more focused on my work.

What are you working on now?

I am preparing for three major out-of-state exhibitions in 2022, and with the encouragement of Marcia Ramirez, a dear friend and another Arkansas native who is a very successful musician in Nashville, I am actually putting together a photography/short story book. I have started a new large sculptural piece called “Tent Revival” that conveys the long-standing relationship of organized religion and white supremacy, and another sculptural series called “Shotgun Houses.” In the meantime, I am exploring these beautiful Hudson River Valley villages and their history for new found objects to use in future projects.

“Pure Art” works for some people. I consistently encourage people to create art no matter on what level, but I’ve always been inspired by things when I create. Even down to my abstracts, which were influenced by aerial shots of Delta farmlands or the many streams and creeks in Arkansas. I say create what’s in your heart. I’ve seen how the arts can cross religious and political boundaries and talk to people where other means fail. When you have evangelical ministers come up to you and say, “I think I’ve been doing it wrong,” after seeing your work, and ex–white supremacists thanking you and sharing their story of a lifetime of hatred then reconciliation, you realize the true power of the arts.

What do you miss most about Arkansas?

Growing a quarter acre of purple hull peas and tomatoes at St. Joseph’s. I’m about to win some northern hearts, though, when they taste my fried green tomatoes recipe.