Early last Thursday evening, violinist Er-Gene Kahng and I squinted over a tiny note in red pencil on a score spread across the piano in her office on the campus of the University of Arkansas at Fayetteville. “As if in a minor key?” Maybe. Probably not; it was hard to tell. The cursive was stately and neat, but deciphering it was still a fuzzy process. That note in the margins — one of the few revisions communicated in text rather than as a note head on the staff — was made by the hand of Florence Price, the 1903 valedictorian of Capitol Hill School in Little Rock and the first African-American woman to pen a composition that would be played by a major orchestra. It appears in Price’s “Violin Concerto No. 2,” completed only a year before her death in 1953 and considered lost until 2009, when it turned up in an abandoned house in St. Anne, Ill.

Kahng, who was invited to view the rediscovered manuscript in 2016, held in the David W. Mullins Library basement home of the university’s Special Collections, said the first thing that struck her about Price’s score was that the composer was “very neat. Maybe that’s a very superficial observation,” Kahng said, “but one that could stem out into some imagined scenarios, such as ‘How does somebody compose?’ It’s possible that since this is very neat, it’s the third or fourth draft in which she’s worked out all of her initial sketches, but wants to see things more cleanly.”

It’s also possible, Kahng said, that Price was a composer who’d have “done that mental manipulation in her mind first, and doesn’t really need to work it out on paper.” That, too, is hard to say; even for composers who pepper their scores with strategic instructions — a diminuendo here, a “dolcissimo” there — much of the task of interpreting a score can be left to the hands of the performer. And, Kahng got a chance to do just that, when she recorded the concerto with the Janacek Philharmonic on a project released by Albany Records earlier this month. She’ll play Price’s “Violin Concerto No. 2” again with the Arkansas Philharmonic Orchestra, the ensemble for which Kahng serves as concertmaster, Saturday evening, Feb. 17, at Bentonville’s Arend Arts Center, and again in May with the Fort Smith Symphony. Kahng will also play Price’s music in the Great Hall of Crystal Bridges Museum of American Art on Wednesday, Feb. 21, as part of the Trillium Salon Series.

In rehearsal, Kahng has been playing from a standardized version created by notation software, as nearly all musicians do these days, but she’s kept a copy of that original manuscript close at hand for consultation. “In a way,” she said, “it’s almost like looking into somebody’s journal. There’s kind of that peering into the imagined private life of a composer. … Because my primary line of work is not dealing with primary sources, I would say there was a real thrill in viewing something that was one step closer to — I mean, I don’t wanna sound too mystical — but to someone’s presence. To someone’s soul.” 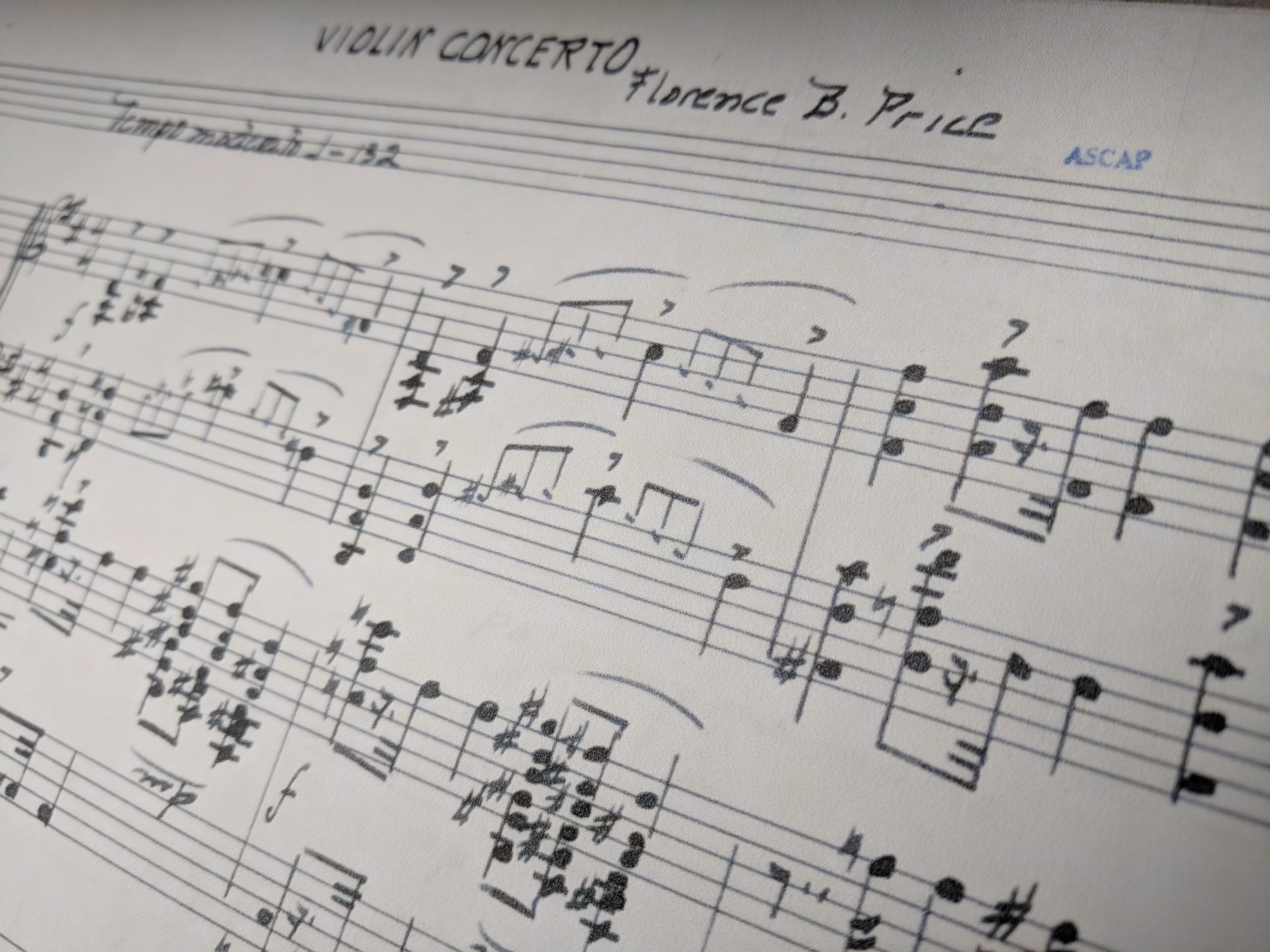 The performances are part of a full-fledged resurgence of interest in Price’s work; a quick Google search will yield all sorts of commentary over the last several weeks on Price and her legacy: an Amazon listing for the Janacek Philharmonic recording, of course, as well as 2018 articles from The New Yorker, The New York Times and NPR. Understanding why Price’s legacy seems like a new phenomenon 65 years after her death goes a little deeper than the concerto’s 2009 rediscovery. The existence of Price’s repertoire — 300-plus pieces overall — asks us to look more thoughtfully at the classical canon itself: how it came to be, and why it’s comprised of so many works from people who Price does not resemble. “To begin with, I have two handicaps — those of sex and race,” the composer wrote in July 1943 in a letter to the German-born conductor Serge Koussevitsky. Price, who’d been denied membership even in the Arkansas State Music Teachers Association because of her race — had moved from Little Rock to Chicago some 16 years before, after racial tension and Jim Crow laws made life in the South untenable. She wrote to Koussevitsky again that November asking him to consider performing her works, saying, “Unfortunately the work of a woman composer is preconceived by many to be light, froth, lacking in depth, logic and virility. Add to that the incident of race — I have Colored blood in my veins — and you will understand some of the difficulties that confront one in such a position.”

Seventy-five years after that letter was written, Price’s place in the canon among the great composers — mostly white, mostly men — only now seems like a genuine possibility, and an accomplished Fayetteville-based violinist is grappling with her role as the musical vehicle for Price’s unearthed works — in the case of “Violin Concerto No. 2,” one that was buried long enough to make Kahng’s treatment among the first.

“In a way, you could say that it’s very liberating, because then you have a lot more creative parameter to explore,” Kahng said. “But it’s also the exact opposite, because you’re kind of out there without a safety net. I found myself bouncing between the two feelings. I don’t have to be the 5000th person trying to say something fresh with the Tchaikovsky violin concerto, but at the same time, it’s also daunting that I’m the first person. … It inspires me to be a real advocate for music that, for whatever reason, has been marginalized. And it makes me curious what else we might be missing.”