Hot Springs’ historic Whittington Park is home to a handful of old-school oddities and road-trip destinations: the Arkansas Alligator Farm and Petting Zoo, the Historic Baseball Trail that commemorates the park’s colorful history as a hub for major league spring training, a jug fountain where visitors can fill containers with cold spring water from West Mountain’s Whittington Spring, an immaculate handmade miniature railroad attraction called Tiny Town. Last Friday evening, that tree-lined greenway was also a spot where visitors to “The V Show: Subtle and Explicit Female Imagery” grabbed a pink marker from a doilied anteroom table and wrote words like “peach fish,” “china cabinet,” “velvet lockbox,” “Holy of Holies” and “Venerable Monosyllable” — as well as its plain-spoken equivalent, “cunt” — on a posterboard framed in stately gold. 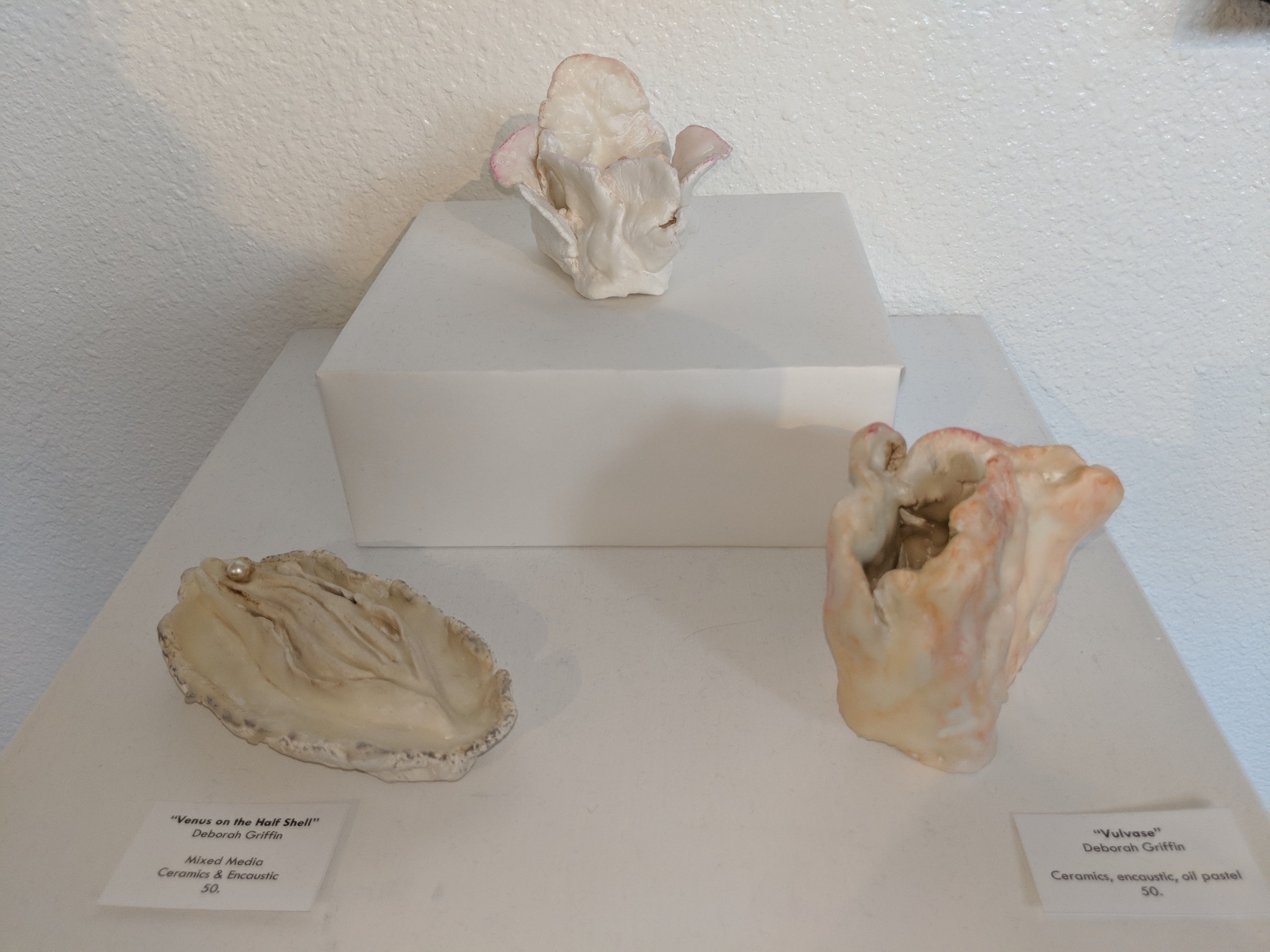 “NuNu” was a new personal favorite word, Vanessa Tomczak, Emergent Arts’ program manager, told me. Like the euphemisms on that interactive board, the 50 pieces that make up Emergent Arts’ “The V Show” alternate between goofy, covert, steamy, abstract and interactive. Some, like Deborah Griffin’s encaustic ceramic pieces “Yoni Iris” and “Vulvase,” are soft. Some are more confrontational: Alice Guffey Miller’s “Hands Off Our Business” is a “Protective Shield” fashioned from recycled and repurposed materials and “created to defend women’s rights” (the artist carried it in the 2018 Women’s March on Arkansas in Little Rock). Other pieces manage to be both soft and subversive at the same time: Ivy St. Germaine’s Victorian-inspired earrings with the word “cunt” delicately embroidered in script inside tiny silver settings, for example, or Angie Ezekiel’s “Muff” and “Honey Pot” in cursive needlepoint. 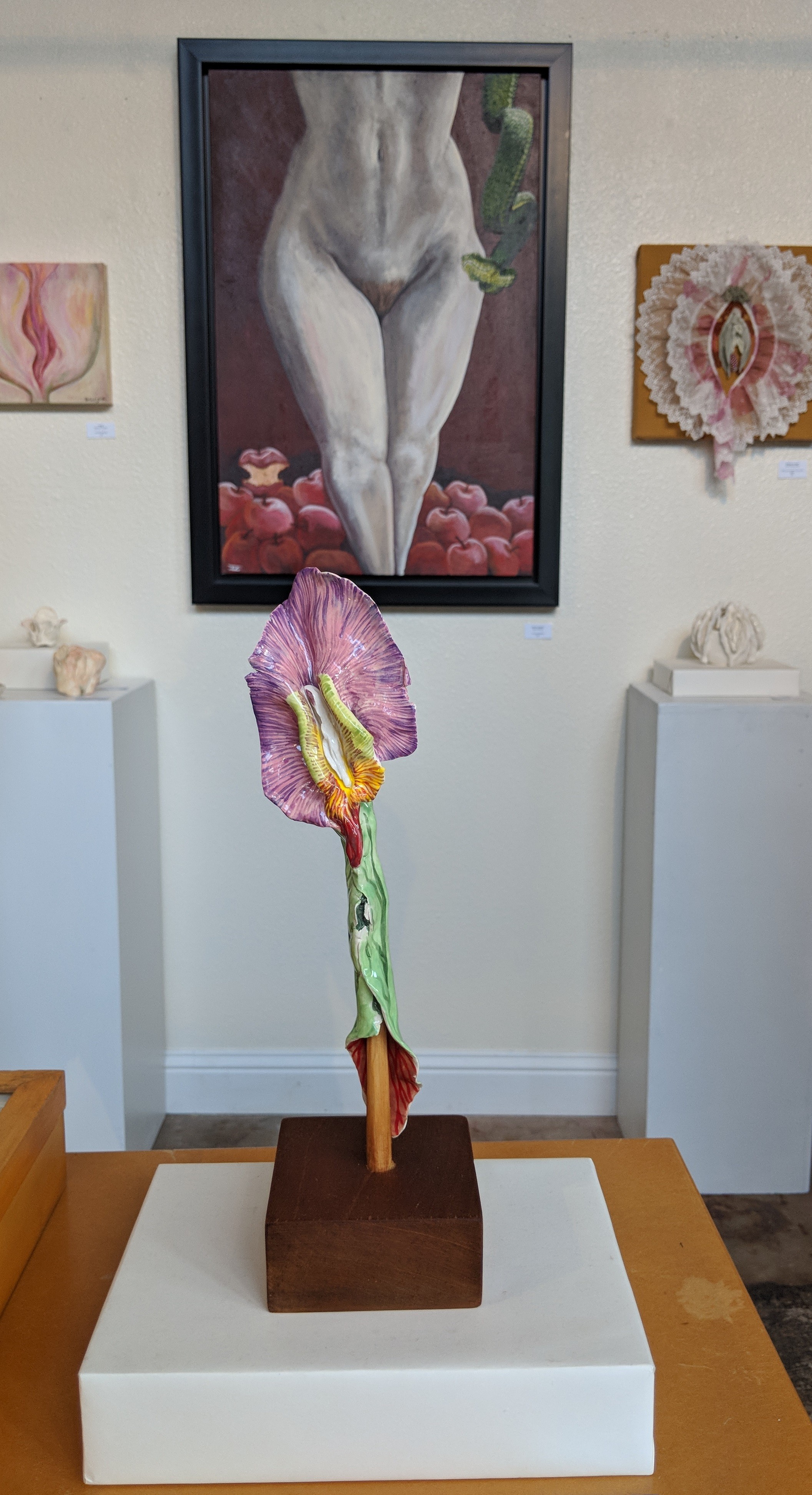 Ezekiel, a torch singer who goes by the name “Sylvia Stems” onstage, guest curated “The V Show” with Tomczak and Emergent Arts Executive Director Erin Holliday. “Almost a year ago,” Ezekiel said, “I sent Erin an artist’s photos that were made of groupings of flesh-colored satin coin purses, turned inside out.” That sparked a conversation, Ezekiel said, about all the ways in which vaginal imagery surfaces in “art, fashion and everyday life,” and further, how those elements might be more likely to get overlooked than their phallic counterparts. (Ezekiel pointed to the Mountain Tower in her adopted hometown as a particularly conspicuous architectural example.) That conversation was serendipitously timed with Emergent Arts’ upcoming 10th anniversary in August of this year, a time Holliday and her colleagues felt was appropriate “to start featuring more ‘grown-up’ content,” Tomczak said, “particularly since we don’t have any children’s programming in June.” 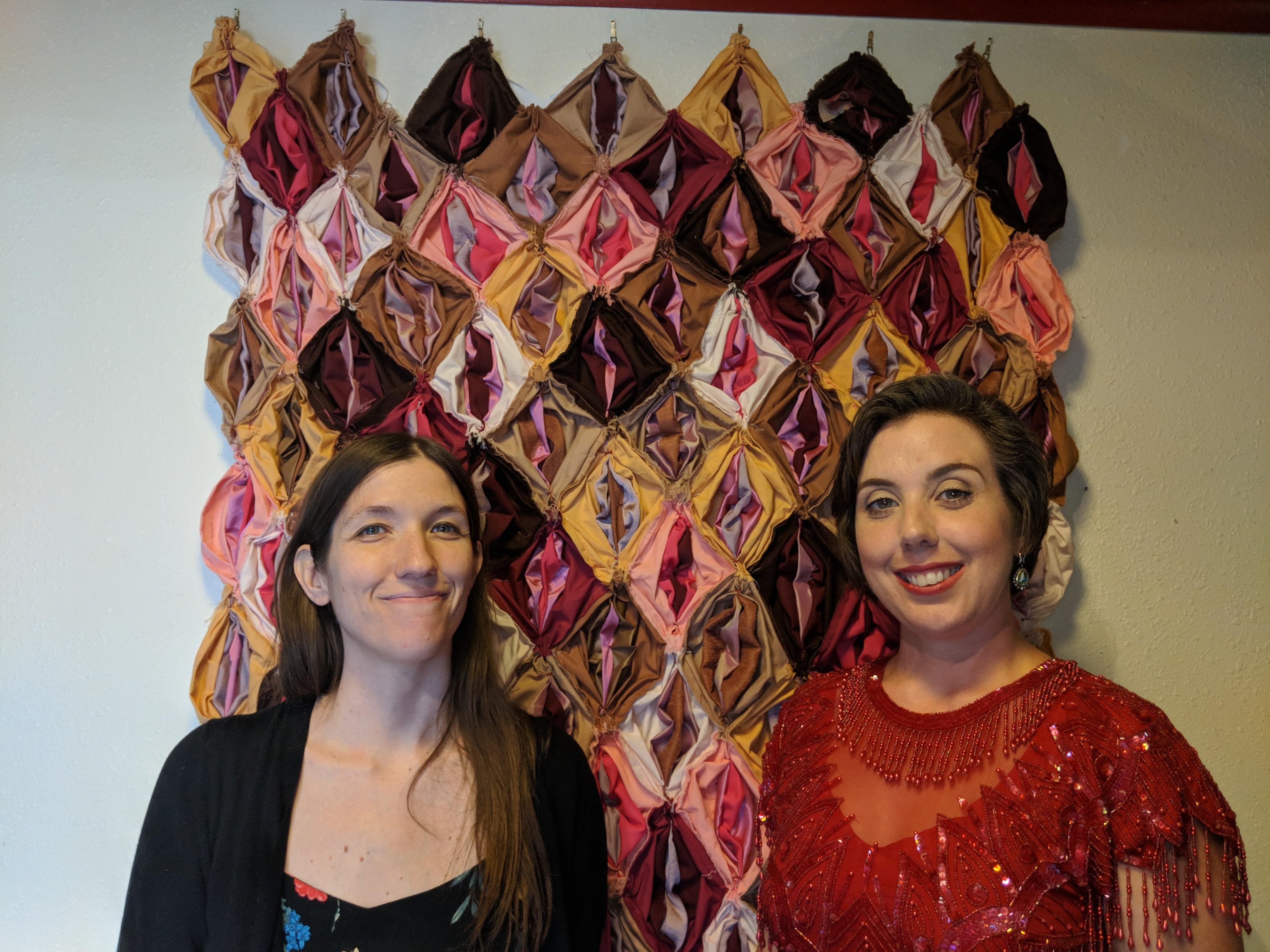 “The V Show” is celebratory in tone, and that’s by design, Tomczak said. “Some people create artwork to move past traumatic experiences, and we didn’t want to create an inappropriate setting for viewing potentially sensitive work.” Deborah Griffin’s charcoal drawing “Womb Cave” depicts a revered rock formation in Bulgaria that draws tourists from afar for its uncanny representation of the “Deep Feminine,” and Julie Williams’ “Dare To Swing” beckons visitors to recline in a modified freestanding hammock, its center slit and lined with pink folds of fabric that cradle the “swinger.” 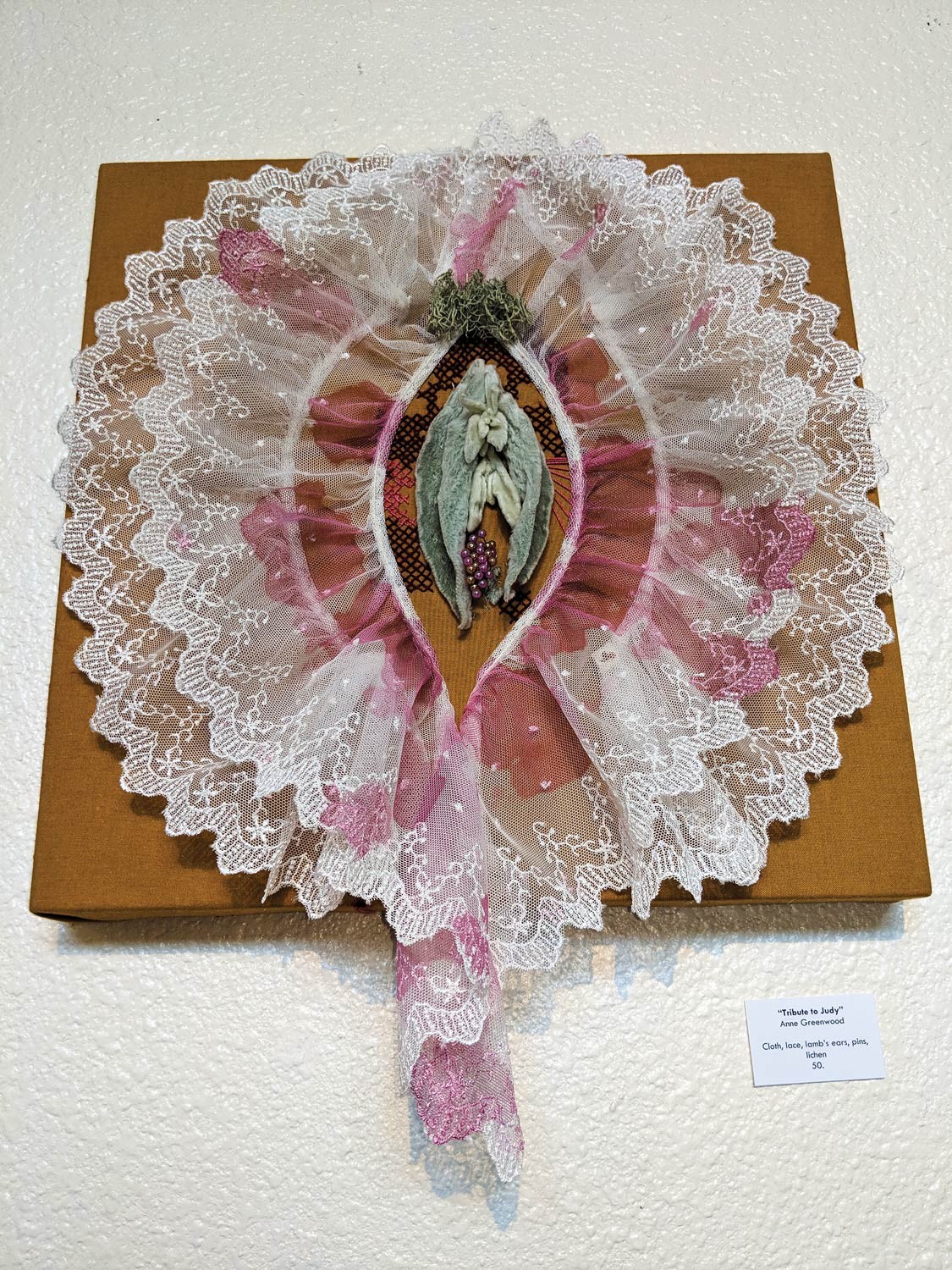 “We were surprised by the number of people who wouldn’t normally consider themselves visual artists who submitted quality work,” Tomczak told me. In fact, one piece — “Milk-O-Vision,” a sort of lightbox diorama with images of 1950s-era health class videos projected over a milk waterfall — is engineer Bob Nagy’s first attempt at art since grade school. The waterfall is made of powdered milk and titanium dioxide, he said, “with a little vinegar and some non-foaming soap to keep the splash down.” Other pieces borrow from — and curtsy to — a long and complicated history of feminist art, as does Kelly Cowart’s cleverly titled woodwork, “The Vagina Mono Log,” and Anne Greenwood’s “Tribute to Judy,” a wall-mounted bloom of lace, cloth, lamb’s ears and lichen inspired by the place setting for Emily Dickinson in Judy Chicago’s 1979 installation “The Dinner Party.” A goal for the show’s curators, Tomczak said, was to highlight words like “cunt” and to create a space where they were shown “in a positive light.” 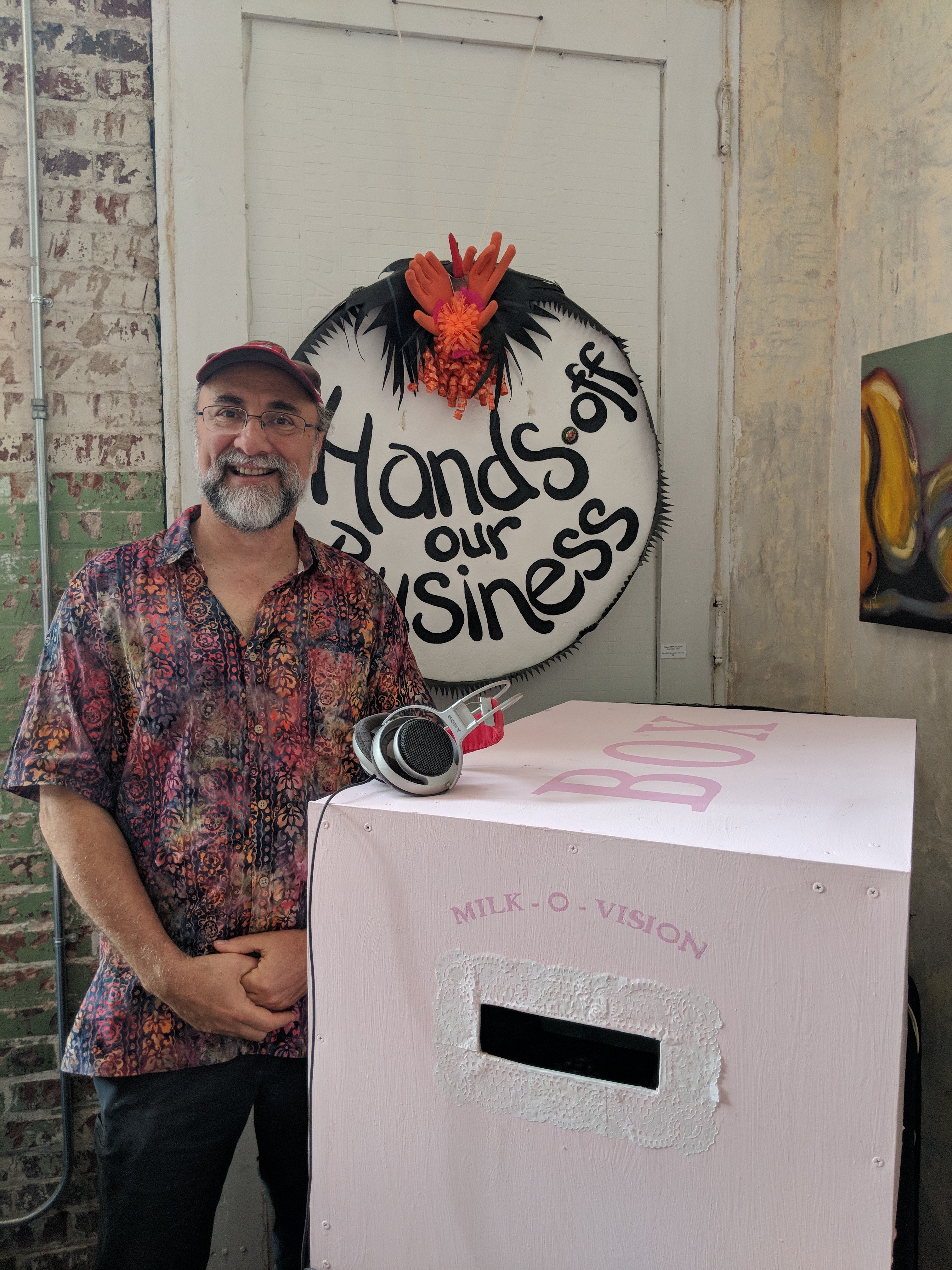 “The V Show” is on display at Emergent Arts, 341-A Whittington Ave., Hot Springs, through June 16. Gallery hours are noon-5 p.m Thu.-Sat.