When Alisa Coffey accepted the position of principal harpist with the Arkansas Symphony Orchestra (ASO), she’d never even been to Arkansas before. Today, this 34 year-old is on a mission to cultivate Central Arkansas’s harp community in diverse ways.
She’s now enamored by the instrument’s lush sonic textures, but Coffey admits she first fell in love with the instrument for the way it looked. “It was large and fascinating to me,” she recalled. “There are all these moving parts. Pedals connect to the rods and go up through the column of the harp and connect to all the levers.” 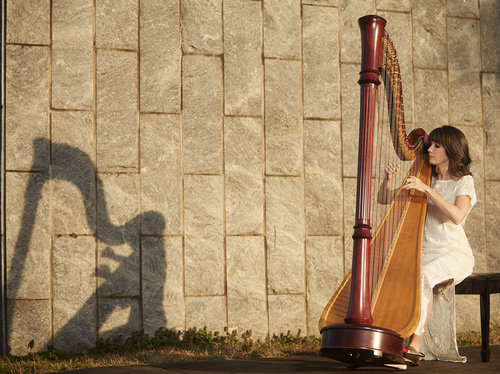 Kelly Hicks
With a range of six and a half octaves, weighing nearly 80 pounds and reaching a height of six feet, the harp is classified as both a rhythm instrument and as a string instrument, just like the piano. That’s the instrument Coffey first learned, and it felt more comfortable. She describes harp as taking the piano’s horizontal plane and making it vertical.

Support the Arkansas Blog with a subscription

We can't resist without our readers!

“They have kind of the same texture,” she says of the two. “But the technique of it took me a while to embrace and feel comfortable with. It’s also a really gratifying instrument right off the bat because you can do glissandos where you can make these wave-type sounds really easily.”

Those glissandos — a continual upward or downward slide between notes — along with the mechanical complexity of the instrument, drew her in as a budding harpist in Great Falls, Virginia, a suburb of Washington D.C. Her earliest memories of picking up what she describes as “a fascinating machine” include learning Pachelbel’s “Canon in D Major,” which she describes as “not terribly harptistic,” but nevertheless a piece she plays it a lot (cue stereotypical stately wedding music with its slow, unfolding round-structured melody).

Coffey became the ASO’s principal harpist in 2011, initially as an interim sub. The role, which she speaks passionately about, became permanent the following season. “Sometimes we’re providing a rhythmic sense to the orchestra,” Coffey said. ”Other times we can contribute to the melody line along with the strings, so we have that dual role, playing a lot of chords and defining harmonies.”

“We have moments where the orchestra clears out and we get to play these flourishes, we call them cadenzas,” she says. “That’s always exciting and slightly terrifying.”
She enjoys performing Tchaikovsky’s “Nutcracker” cadenza each winter. This magical sweeping enchantment, which lasts less than a minute, has entranced generations. In the ASO’s April 13-14 concert “Beethoven and Blue Jeans” she performed Ravel’s dizzying “Tzigane,” which opens to a famously dramatic solo violin cadenza, before the harp ushers in the pounce of the entire orchestra, as the violin trills.

“Harp is used throughout the whole piece,” she said. “Ravel uses harmonics and glissandos to really cool effect to portray this gypsy character. There are really interesting harmonies and colors. We get to do a lot of fun things.” Teaching and outreach are also of vital importance to Coffey. In addition to offering private lessons utilizing the Suzuki training method, she’s cultivated an Arkansas chapter of the American Harp Association (AHA), a professional organization that she attributes to helping her in her journey.

Coffey remembers the Baltimore chapter of AHA she was in. The master classes, guest performances, and competitions proved integral in her career development.
“Those events were really inspirational to me and I’d love to see a lot of those same opportunities for students here,” she said.

“Our goal with the AHS chapter was to bring in other harpists from lots of other states to introduce the students to these players ideas, sounds. I think we all learn so much from each other when we get together,” she explains. “My students — when they get together in harp ensembles and play together — they learn a lot. Getting them to work with other harpists broadens their horizons, so that’s my goal with the AHS.” She also dreams of building a harp program at the University of Arkansas Little Rock, where she’s taught private lessons in the past. That goal is one reason she went back to school last year in pursuit of her PhD at the University of North Texas. As a commuter student, she travels 5 hours each way to the panhandle town of Denton, Texas, to hone her craft to the next level.

“Having played in an orchestra for such a long time I was so focused on projecting and having a big sound,” she explains of wanting to push herself. “It’s been good to go back to the mechanics of the harp as an instrument.”