What a great, fast eight years

Jim Harris 5/4/07 2:00am
Eight years. I’ve really been “at the job” of newspapers for much longer, it just focused on entertainment during these past eight years. Starting next week, it will focus on sports. Again. Where I started eons ago. 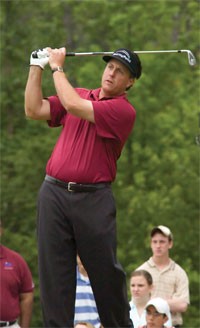 Mickelson goes by the numbers

Jim Harris 4/26/07 2:00am
It's all in the short game, Phil Mickelson says s at Alotian.
Advertisement

Back to what I really love

Jim Harris 4/23/07 2:00am
Where was I, the sports lover, the guy who couldn’t wait for Dickey-Stephens to open, a few of you may ask? I was checking out one of my other loves: a local, original music show at Juanita’s that the University of Central Arkansas Honors College had pull

First festival of the season

Jim Harris 4/12/07 2:00am
Maumelle Family Fest, a week from Saturday, hopes to draw from the region with musician Jim Jamison and fun events.

Jim Harris 4/5/07 2:00am
Talented vocalists from Arkansas ages 15 to 35 will have a chance to be a “star,” and it won’t be an all-or-nothing premise like winning “American Idol” or “Nashville Star.”

Stan Heath had his chance

Jim Harris 3/29/07 2:00am
Never lose sight of the fact that with Broyles and the UA athletic department, it’s first about money, then wins.

Spring cleaning, plenty to do

Jim Harris 3/22/07 2:00am
Here are some last words on some recent happenings before we move on to an exciting couple of weeks of big events around the area.

TSO without tuxes and pyro

Jim Harris 3/15/07 2:00am
Fans of the Trans-Siberian Orchestra touring Christmas music show have a non-seasonal chance next week to see their favorite musicians in their alter-ego project, O’2L.

Jim Harris 3/8/07 2:00am
Cooper's Orbit takes the top prize in the Musician's Showcase.

Jim Harris 2/22/07 2:00am
UA Athletic Director Frank Broyles was nudged out the door last week. So, what do we do now?

Filling Sticky’s to the walls

Jim Harris 2/15/07 2:00am
As expected, last week’s lineup was packed with outstanding talent in every act, the kind we’ve come to expect in past finals but that’s rare in most clubs on a single night.

Talent rises to the top

Jim Harris 2/8/07 2:00am
If Oaklawn Park-style handicappers were giving odds on the Arkansas Times Musicians Showcase, Chris Henry’s band Cooper’s Orbit would likely have opened as the favorite in the Morning Line.

Jim Harris 2/1/07 2:00am
Round 1 of the Arkansas Times Musicians Showcase went off without a hitch, starting with a sensational performance by Damn Bullets.
Advertisement

You couldn't make this up

Jim Harris 1/25/07 2:00am
Remember in 2002 when Nolan Richardson fired off what amounted to a “pay me and I’ll leave” statement in Lexington, Ky., the one that directly finished him as University of Arkansas basketball coach just a few days later?

Who’s the best band around?

Jim Harris 1/11/07 2:00am
The deadline to enter the Arkansas Times Musicians Showcase is hours away.

Jim Harris 12/21/06 2:00am
Want to bring your band acclaim and a few bookings? Enter the Arkansas Times Musicians Showcase contest, scheduled to begin in late January at Sticky Fingerz.

Jim Harris 12/14/06 2:00am
After a little worry among promoters and a little pleading from some sectors of the media to support Jermain Taylor, Central Arkansas showed up nicely for Taylor’s middleweight title defense against Kassim Ouma on Saturday at Alltel Arena, to the tune of
Advertisement
Next page →