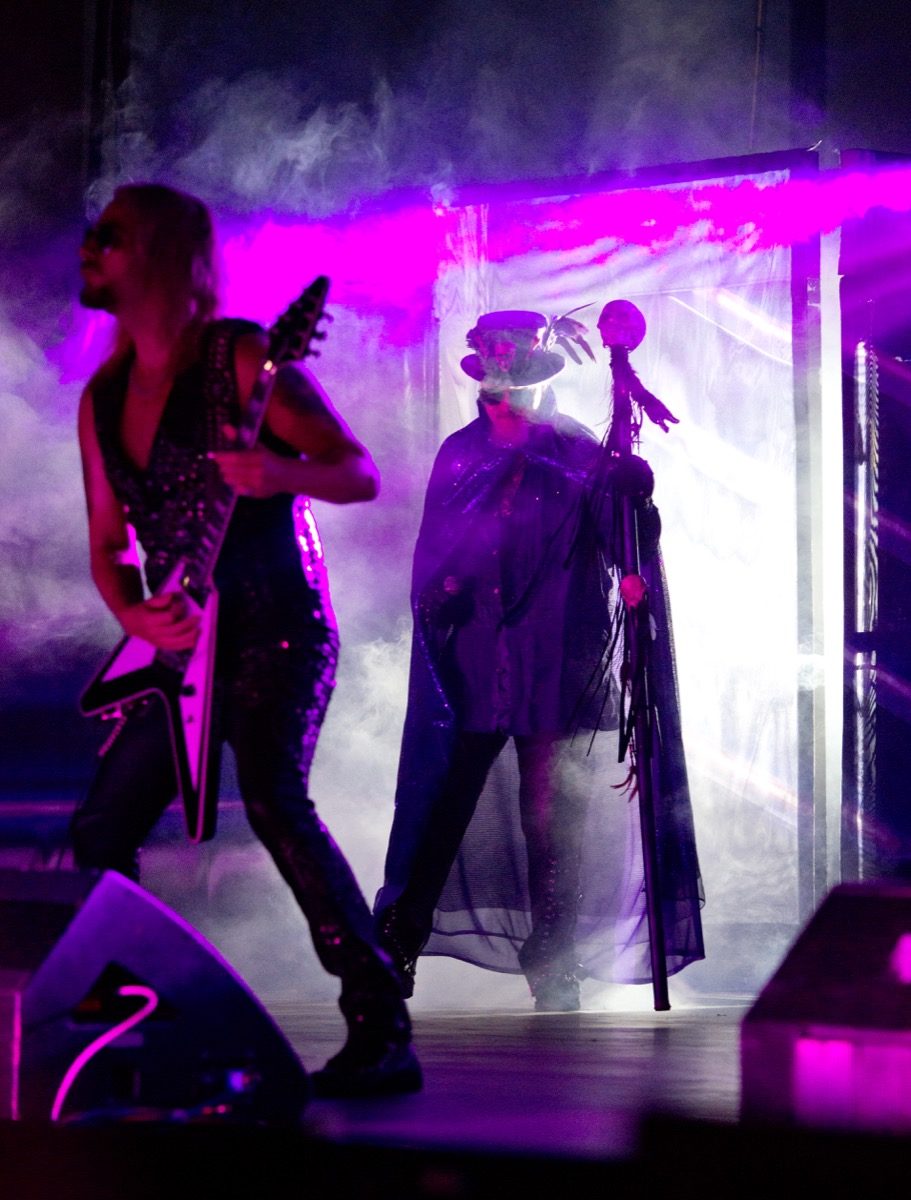 Two British bands with a combined century of rock in their repertoire hit Little Rock’s ever-vanishing riverside on a breezy, perfect concert evening with nary a missed note between the two.

Promoting its 25th studio LP, Uriah Heep turns 50 next year, guided by guitarist and founding member Mick Box. Lead singer Bernie Shaw — comparatively a greenhorn with 32 years logged with the band, is settling in nicely. He resembles Motley’s Vince Neil from a distance (or rather, vice-versa), but is still hitting the required piercing high notes — after taking an onstage sip, he explained his drink contained only healthy vocal stuff like ginger. “Mexican mouthwash,” he advised, comes only later, after the show.

Noting the band’s incredible longevity, Shaw said Heep would endeavor to cover all the decades, and gave it a good go. We heard from 2018’s “Living the Dream” 1970’s “Gypsy” (the first song from the band’s first album) and “Between Two Worlds” from the late 1990s. Heep’s most recognizable song, “Easy Livin,’” was the closer. With such a deep catalog, this left a heap of Heep on the table, including no “On the Rebound.” (However, t-shirts featuring the album from which that song came, 1982’s “Abominog,” were available. In fact, the Heep/Priest merch tent did steady business all night, with plenty of headbangers apparently willing to spring for $40 t-shirts ($45 for XXL), $20 for a bandana and $15 for a coozie to keep their $7 beers cold.) But this well-oiled unit hit highlights with grace and incredible tightness. In a nice touch, the quintet exited to “Pomp and Circumstance.”

Concerts can be great people watching, but at metal shows, the most interesting thing is often the t-shirt selection among the crowd. Saturday’s show had some great offerings of band, vintage and message (“Listen to More Black Sabbath”), as well as some outliers — “Bigfoot Loves Weed,” for one. Meanwhile, the swollen Arkansas River provided its own morbid spectacle throughout. As the river encroached the park, lapping against the bricks of the back of the amphitheater, its brisk current often matched the blistering tempos. Geese wandered about near the backstage equipment like hopeful groupies. 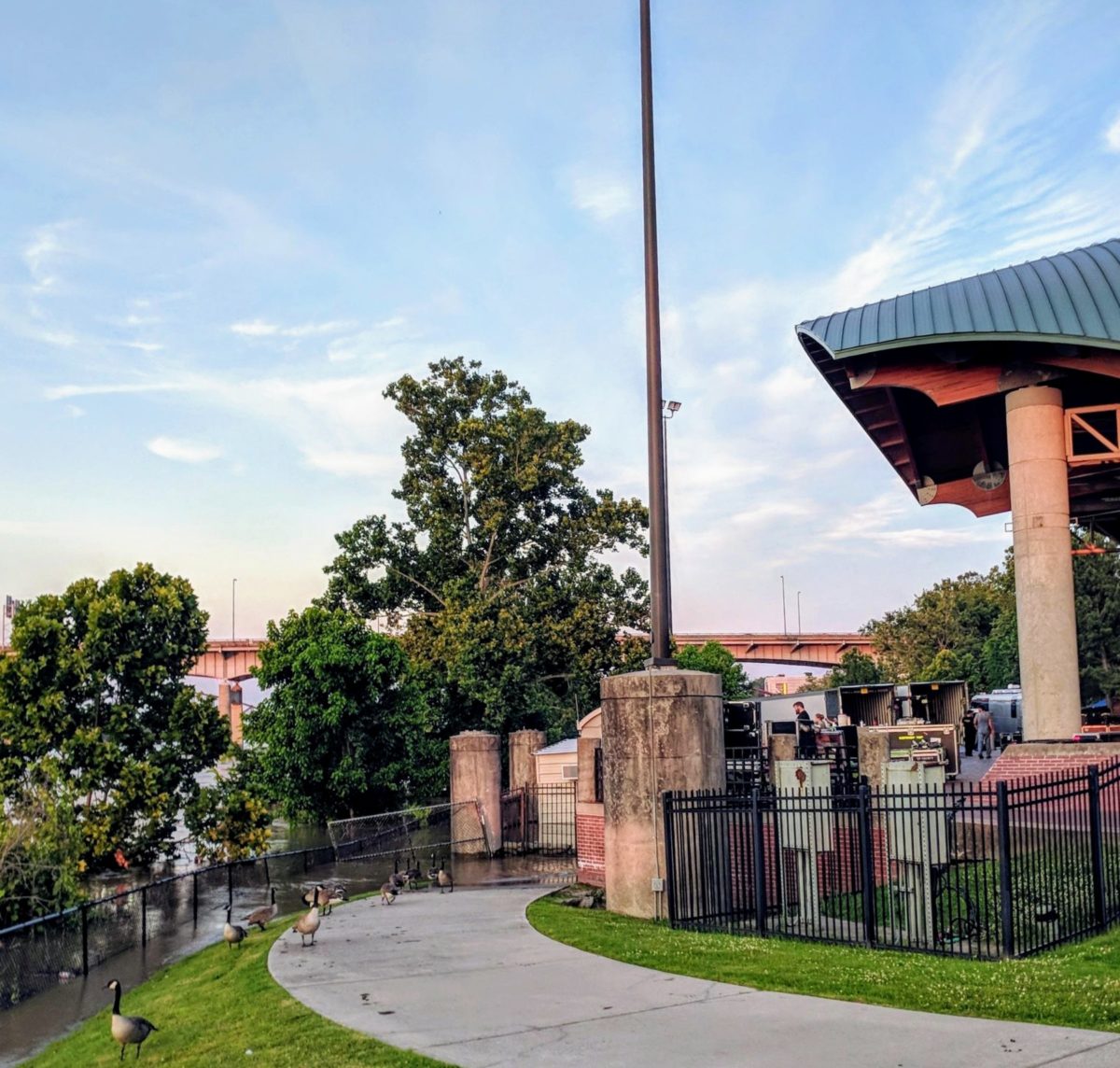 Geese wandering along the water line behind the First Security Ampitheater

Then, the lights went down for Judas Priest to the strains of … Black Sabbath’s “War Pigs”? OK guys, I suppose that song is, sadly, always timely. Plus, that gentleman I saw earlier with the t-shirt did advise us to listen to more Black Sabbath.

“Heading Out to the Highway” quickly followed, but it was a feint. Unlike Heep’s attempt at spanning a decades-long career, Priest’s set leaned heavily on more recent material, like “Halls of Valhalla” from 2014’s “Redeemer of Souls” and especially from the band’s 18th and newest album, “Firepower.” (“No Surrender” from the new LP has become an anthem dedicated to former guitarist Glenn Tipton, who in February 2018 made public his Parkinson’s disease diagnosis and retirement from touring. Sole continuous original Judas Priest member Ian Hill remains on bass.)

But regardless of the vintage of the riffs, flying V guitars sure sound great while soloing, especially with Priest’s patented twin guitar sound. And they sure look cool pointing toward the sky, especially with the backdrop of the night, and even with the menace of the rapid river.

Amid audience cries for older songs like 1978’s “The Green Manalishi (With the Two-Pronged Crown)” — actually a Fleetwood Mac cover, y’all — Halford finally emerged on the familiar motorcycle to give longtime fans release with a vintage triplet of “Hell Bent for Leather,” “Breaking the Law” and “Living After Midnight” before leaving us to our own devices.

Appropriately for Halford, the Freddie Mercury of metal, Queen’s “We Are the Champions” was the band’s exit music. And while the video projection said “The Priest Will Be Back,” they weren’t; not tonight, Little Rock. No encore and no surrender.