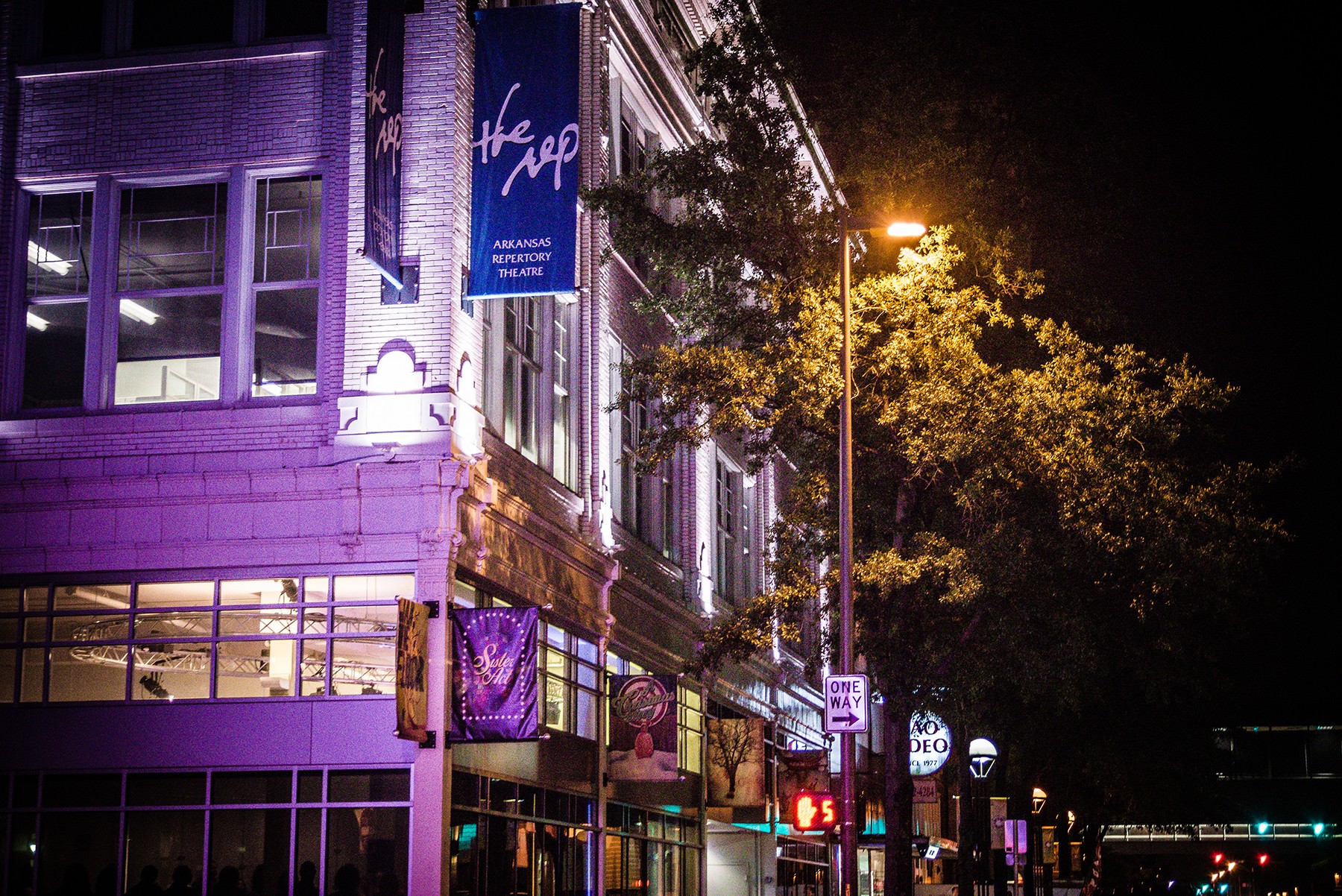 Dig far enough back in a lawyer’s resume, and you’re likely to find some credentials from forensics, debate club or the theater. Little Rock is no exception; a number of the city’s lawyers can sing and entertain, and a handful of them would probably be doing it for a living if they hadn’t fallen hard for the legal profession. Evidently, these talent overlaps have been the case since 1816, when a handful of Little Rock Bar Association members put together a political spoof performance for a lawyer’s luncheon — later called the “Gridiron.” Since 1990, the biennial production’s been held at the Arkansas Repertory Theatre, making this another opportunity for The Rep’s champions to build sustained support for its reinvention/restructuring following the theater’s suspension of operations in April. Plus, the satire’s jokes are crafted directly from current political tomfoolery; presumably, the comedic cup runneth over. Get tickets at threp.org, or by calling 378-0405. SS

Watching paint dry is the expression we use to describe utter boredom. On the opposite end of that spectrum could be watching a demonstration of “wet-on-wet” painting that Hot Springs artist Hugh Dunnahoe will provide 5:30-6:30 p.m. Friday at the Landmark Building (201 Market St.), the Hot Springs campus of Henderson State University. Dunnahoe’s demonstration is part of the reception for the “Teachers are Artists Too” exhibition at the Landmark, featuring work from members of the art faculties at Henderson, National Park College and the Arkansas School for Mathematics, Sciences and the Arts. Amy Hill Imler and Sandy Fleming Newberg will also be painting in public as part of Gallery Walk festivities at Gallery Central (800 Central Ave.), which will also feature work by James Hayes, Paige Morehead, Janice Higdon and Polly Cook. Justus Fine Art (827 Central Ave.) will celebrate the gallery’s 14th year in business with the show “Fourteener,” featuring work by Dustyn Bork, Taimur Cleary, Matthew Hasty, Robyn Horn, Dolores Justus, Jill Kyong, Charles Peer, Sandra Sell, Gene Sparling, Dan Thornhill. Artists Workshop Gallery (610 Central) will feature paintings by Michael Preble and Teresa Widdifield, and Kollective Koffee + Tea (110 Central Ave.) will host a reception from 5-7 p.m. for Katy Wrayford’s show, “A Seat at the Window.” Rayshaun McNary is now showing work at The Avenue in the Waters Hotel (240 Central Ave.), and other venues, including Dryden Pottery, Whittington Gallery, Crystal Springs Mining Co., American Art Gallery and Legacy Fine Art Gallery, will also be open for the monthly after-hours event. LNP 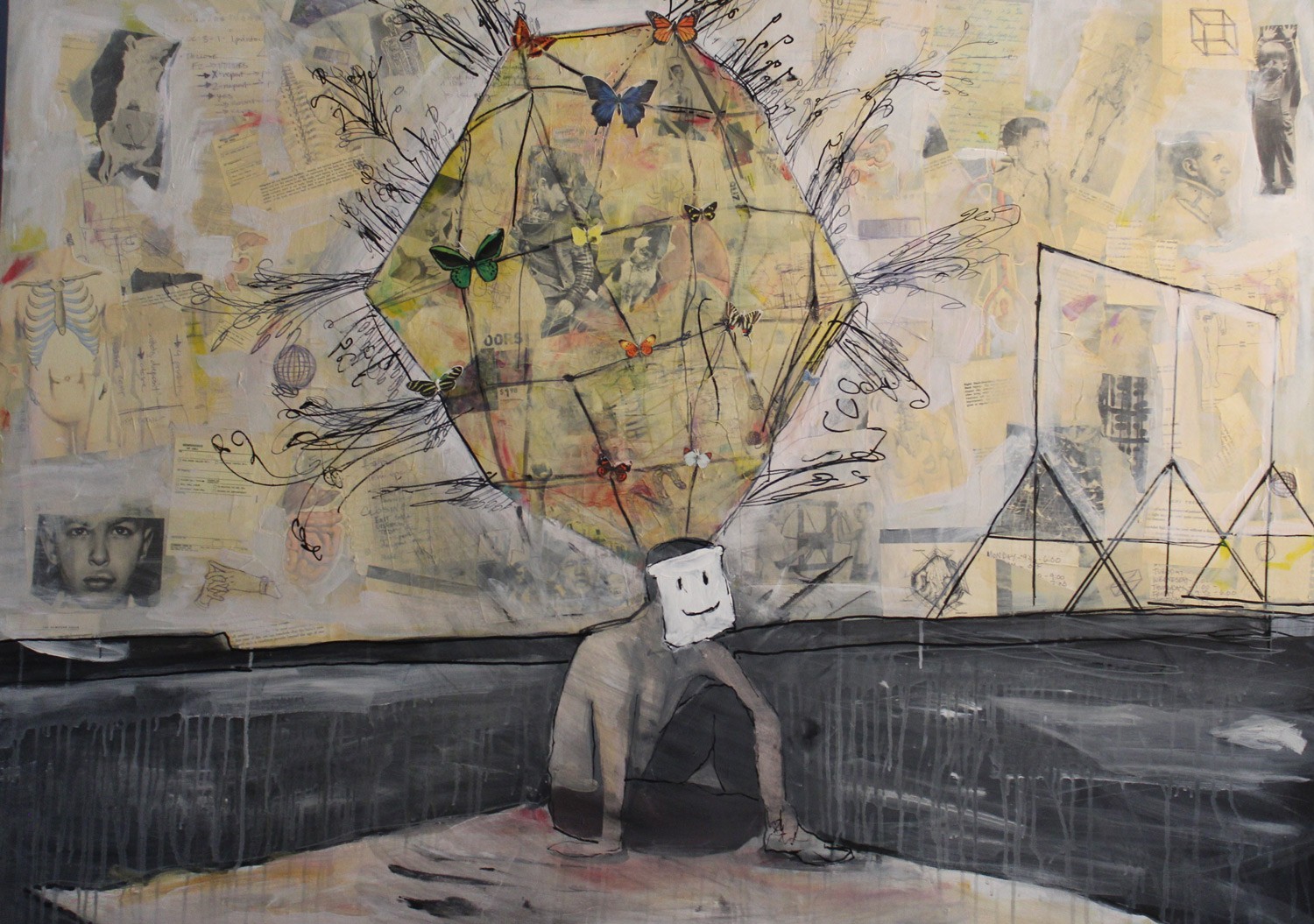 In a piece by painter and printmaker Carmen Alexandria Thompson called “I’m As Human As You Are,” a profile of a woman with half-lidded eyes and a loose cinnamon roll bun is outlined in fuchsia, her head and shoulders seemingly dissected to reveal her brain and upper vertebrae. In another piece — an acryclic on canvas called “Illmerica” — a stubby brown bird perches in a cage above a bodiless round lump of a pink head with a patch of golden hair that flags him unmistakably as the president of these United States. The two works could have come from different artists — or at least from an artist at two different phases of her career. They’re both the work of Thompson, a 28-year old native Arkansan and Hendrix alumna whose show, “The Mind Unveiled,” is this quarter’s installment of the Thea Foundation’s The Art Department. “Mental illness is a pertinent issue these days,” Thompson said of the collection. “This series of work seeks to unveil, expose and open up a discussion for everyone about the beauty and tragic workings of the human mind.” As is the custom for The Art Department’s showcase exhibitions, the opening reception will feature a beer and wine bar, as well as heavy hors d’oeuvres from Ben E. Keith. SS 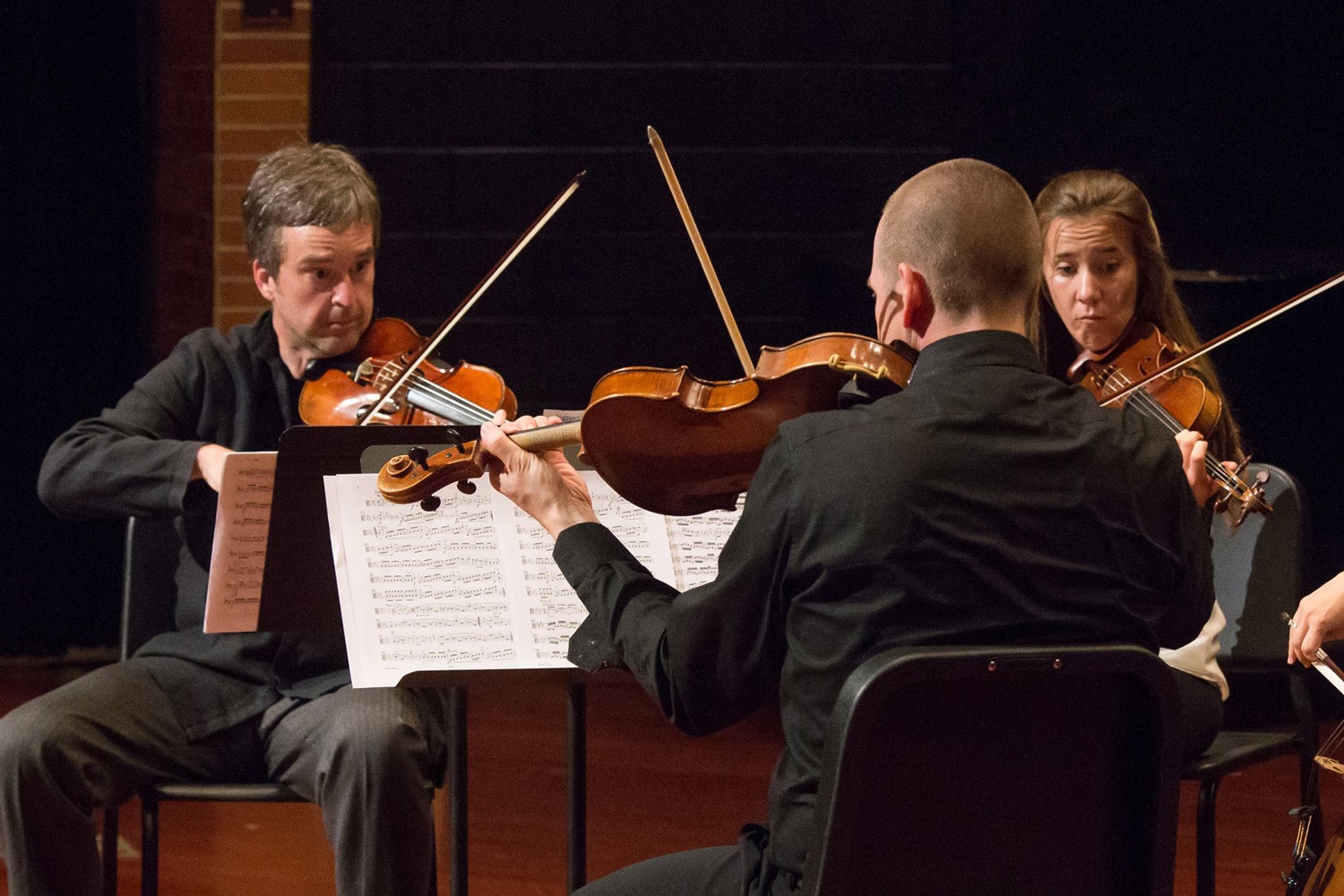 In an essay titled “A Player’s Guide to the Popper Etudes,” University of Denver professor Richard Slavich referred to the 40 cello studies as “a sure and tested path to a secure technique.” Composer/cellist Jeremy Crosmer, no doubt, became familiar with those etudes on his way to obtaining three degrees at the University of Michigan, and wrote “The Crosmer-Popper Duets,” a second cello part to those core solo exercises that rounds them out and, one imagines, makes them feel a lot less like drudgery. It’s that same enthusiasm toward musical discipline that the Faulkner Chamber Music Festival — now in its 12th season — is meant to instill in its day camp musicians, a new batch of whom gathers at UA Little Rock’s campus for masterclasses, coachings and workshops each summer. Crosmer joins FCMF and its parent organization Chamber Music Society of Little Rock for this faculty recital, titled “Reflections.” Crosmer – along with FCMF Director Geoff Robson, Katherine Williamson, Yaira Matyakubova, Philip Boulanger, Ryan Mooney, Jeremy Crosmer and Andrius Zlabys — interpret Debussy’s “Sonata for Cello and Piano,” the contemplative second movement of Aaron Jay Kernis’ “On Distant Shores,” and Brahms’ “String Sextet No. 2, Op. 36” — a welcome antidote for anyone who’s ever met Brahms with a yawn and a “meh.” Students of all ages, kids and Easter Seals clients and caregivers get in free. SS 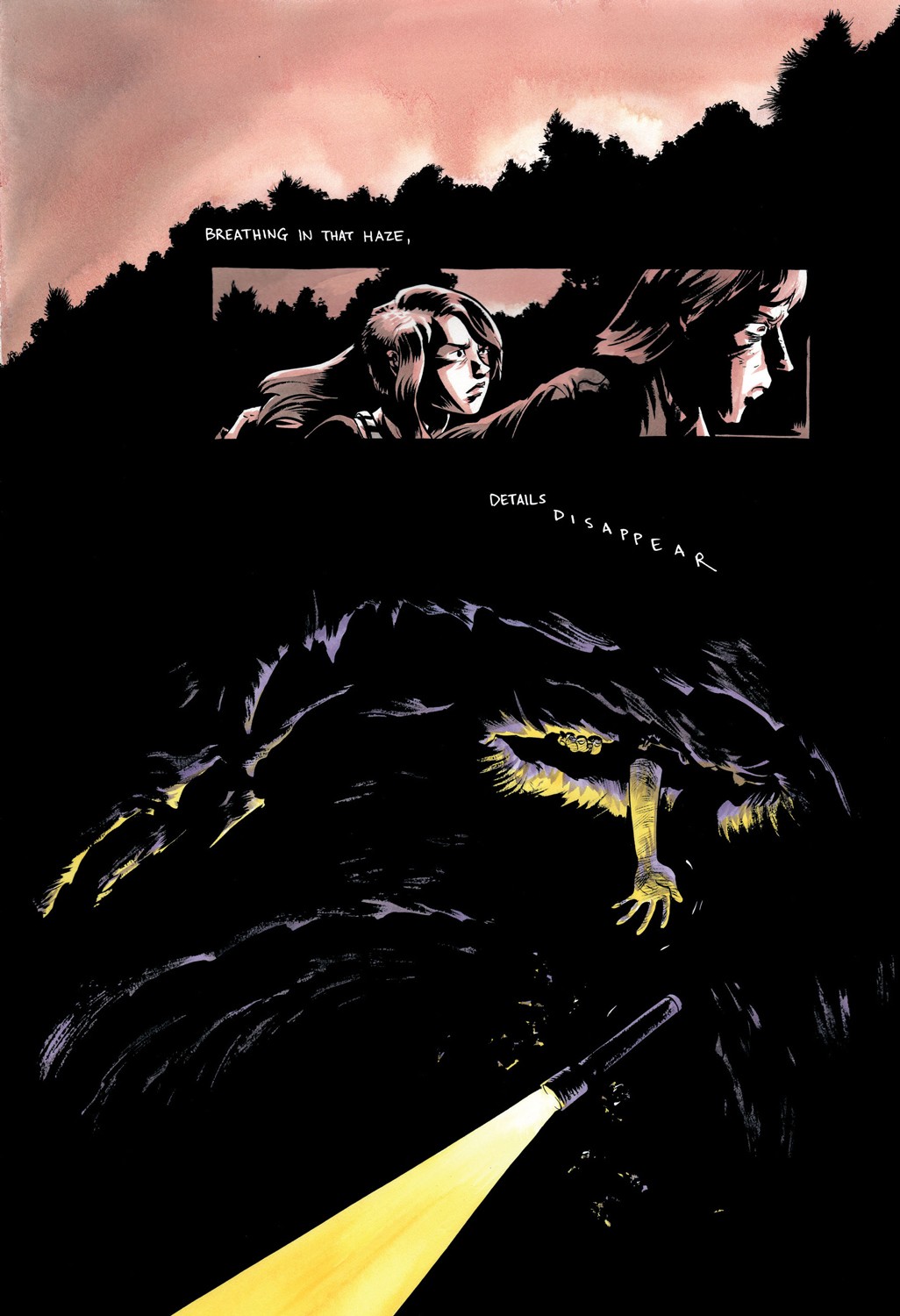 National Book Award-winning illustrator, punk rock performance artist and activist Nate Powell followed up his resistance chronicle — the “March” trilogy, a collaboration with Andrew Aydin and Congressman John Lewis — with a tale of Haven Station, a fictional commune in Powell’s home state of Arkansas. “Come Again,” as the folk tale’s called, opens this way: “Folks already think of the South like it’s another country. But even to Arkansans, the Ozarks are remote.” In that remoteness, outside “the square world,” secrets thrive, memories get buried and shit gets weird. It’s wildly whimsical and fittingly different in tone than Powell’s work on the story of Lewis’ fierce work during the civil rights era, but it’s told with the same visceral touches and pulsing pace that makes Powell’s cinematic style so memorable. Powell returns to Arkansas for this signing; here’s your chance to grab the new book and get your copies of “March” signed by the artist himself. While you’re at it, head to anchor.fm/arktimes-no-small-talk and check out our conversation with Powell on Episode 21 of “No Small Talk,” the arts and entertainment podcast for the Arkansas Times. SS 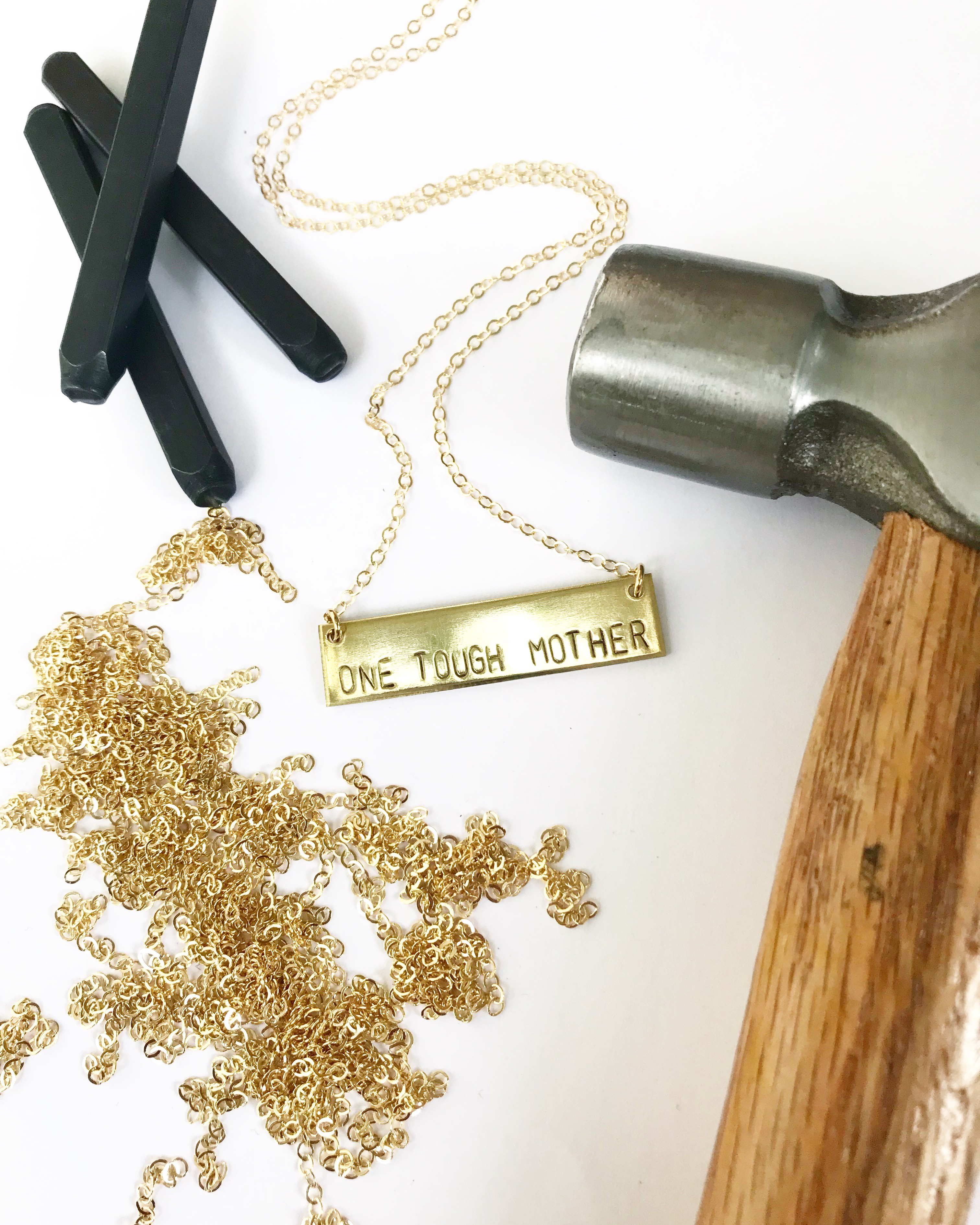 There’s nothing more oxymoronic than a pop-up planned months in advance, right? So, here’s a throwdown the folks at Bang-Up Betty, Crying Weasel and Ar-T’s have pieced together in the last week. To celebrate the sales tax holiday that Arkansas’s Department of Finance and Administration holds every year, Moxy Warehouse and aforementioned makers present “Freekend Weekend,” a chance to sip on complimentary beer (or, on Sunday morning’s edition, mimosas) and buy stuff from your crafty neighbors at Dower, O’Faolain Leather, Krystal Bijoux Jewelry, Viva Vegan, Philly Fresh Ice and more. There are a few caviats and caps, so see the tax holiday link at this event’s Facebook page to make sure you’re in the clear, taxually speaking. SS

Like a lot of noncommercial, homemade art scenes, the history of Little Rock’s zine community has strong ties to performance, poetry and punk rock, and much of it revolved around the lo-fi early ’90s shows at Vino’s. Appropriately, the back room at Vino’s is home Saturday night to “Papercutz,” a “zine night” for local DIY magazine-makers. Local artist Matthew Castellano, who has been making zines since 2010 under the name “Two Arms,” told us: “I don’t really remember what year it started, but two of Little Rock’s best started the event and recently moved outta town, so I hosted Zine Night 2017 at Gallery 360.” The inspiration, Castellano said, comes from the history of Little Rock’s underground scene, “and to this day still is inspiring seeing how others create and communicate. We need a time and a place to come together and trade, sell and build relationships between artists using zines.” It’s a chance to buy some handmade art from your neighbors, but quiltmakers and sculptors need not vend; the “Papercutz” focus is defined and direct, as the Facebook page for the event warns: “Zine night is for ZINES so let it be known: If you ain’t selling a zine, comic book, pamphlet, novel or books, it’s not for you.” Plus: Little Rock graphic novelist Nate Powell and longtime punk rock/DIY chronicler Matthew Thompson will be in attendance. AM 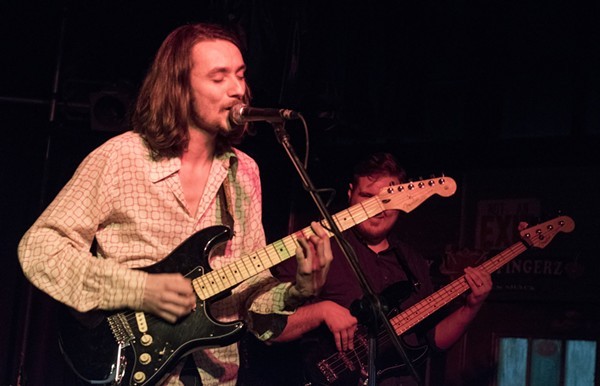 You’ll find a 300-some-odd-word mission statement on the website for The Van, and it’s worth reading. It boils down to a T-shirt slogan, though: “No Rules, No Apologies, Just Help.” Former Marine Aaron Reddin and a fiercely dedicated network of volunteers have, over the years, built a safety net for unsheltered people in Little Rock (and now, through spin-off efforts, in Russellville and Searcy), meeting people where they are and getting them what they need to survive when public support services fall short. What’s more, The One Inc. — the umbrella organization that includes The Van — has built a reputation for tenacious prudence when it comes to donor dollars, and that financial backing has not only sustained the mobile supply unit, it’s acquired a warehouse to store donated goods, a shower trailer and The Field — an urban farm in North Little Rock where produce and chickens, protected from hawks and the like by the watchful eye of a donkey named Willie, feed your homeless neighbors. In turn, this concert from The Brian Nahlen Band, Sean Fresh, Vintage Pistol, The Federalis, The Rios and Grayson Shelton feeds that mission, with 100 percent of funds raised at the door going to The One’s operations. SS 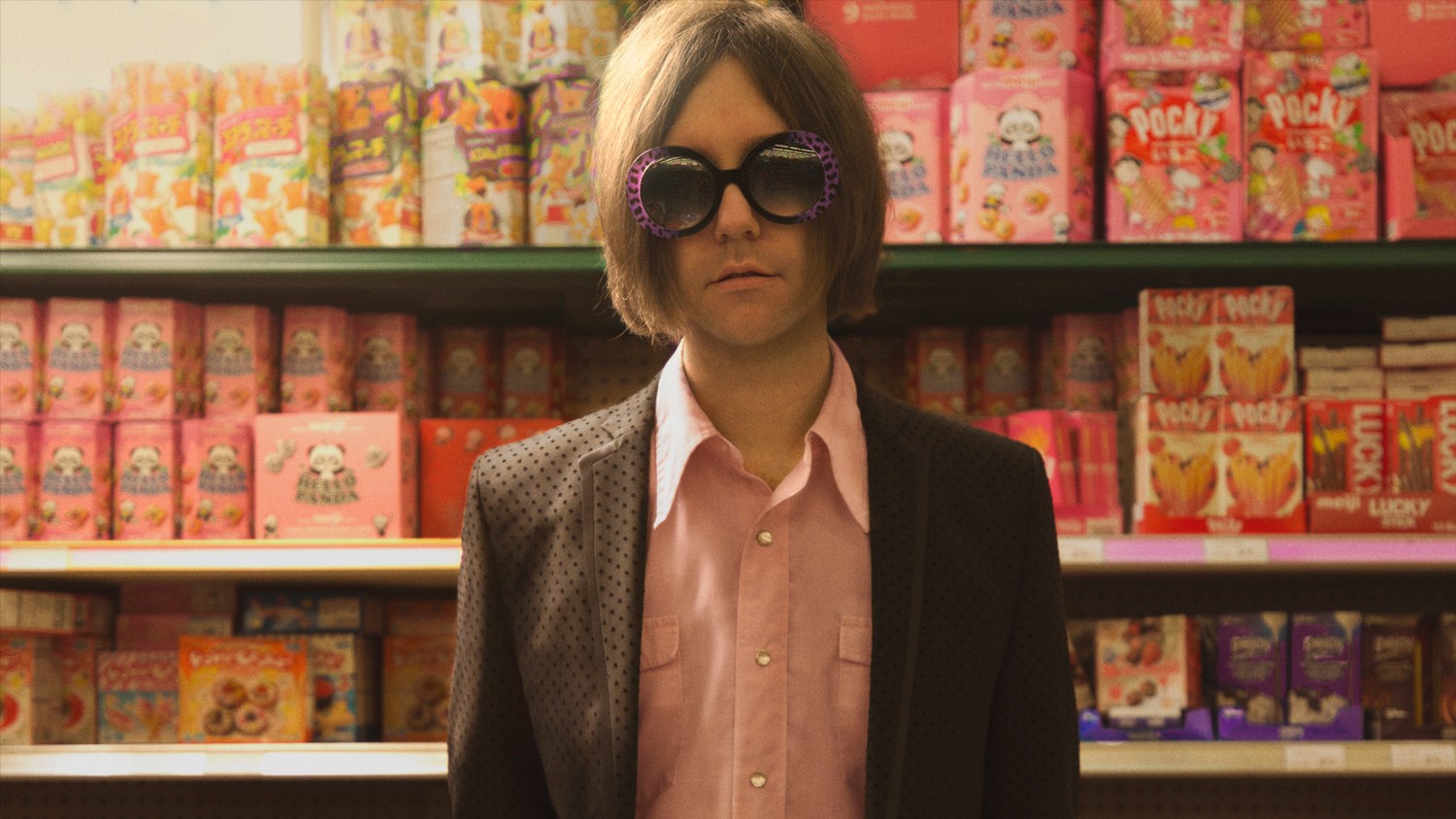 It’s sort of providential that Aaron Lee Tasjan’s initials themselves evoke contention and counterpoint; the gifted guitarist is as willing to poke fun at his own glam-rock propers with the New York Dolls and Semi Precious Weapons as he is the Americana genre he’s so often linked with (See: “E.N.S.A.A.T.” / “East Nashville Song About A Train,” for one.) Tasjan churned out a chunk of the tracks on 2016’s “Silver Tears” while microdosing on LSD, and any resulting consciousness expanding seems to have manifested itself in the form of empathy on his latest, “Karma For Cheap,” the forerunners of which — sonically, at least — make David Bowie’s departure from this realm a little easier to swallow. “I wanted to work really hard lyrically to create a record that wasn’t drawing lines in the sand from a humanitarian point of view,” Tasjan told Rolling Stone in July. “Trying to say something that’s more of a comfort, and to try and be a cheerleader to the people who are on the front lines of all this stuff. To my gay friends, to my transgender friends, to my friends who are women, to my friends of various ethnicities.” Tasjan shares this early Sunday bill with Little Rock’s own sound apothecary Isaac Alexander, whose “What Will You Make of It?” has been its own karmic salve on many a rainy day for this writer. SS 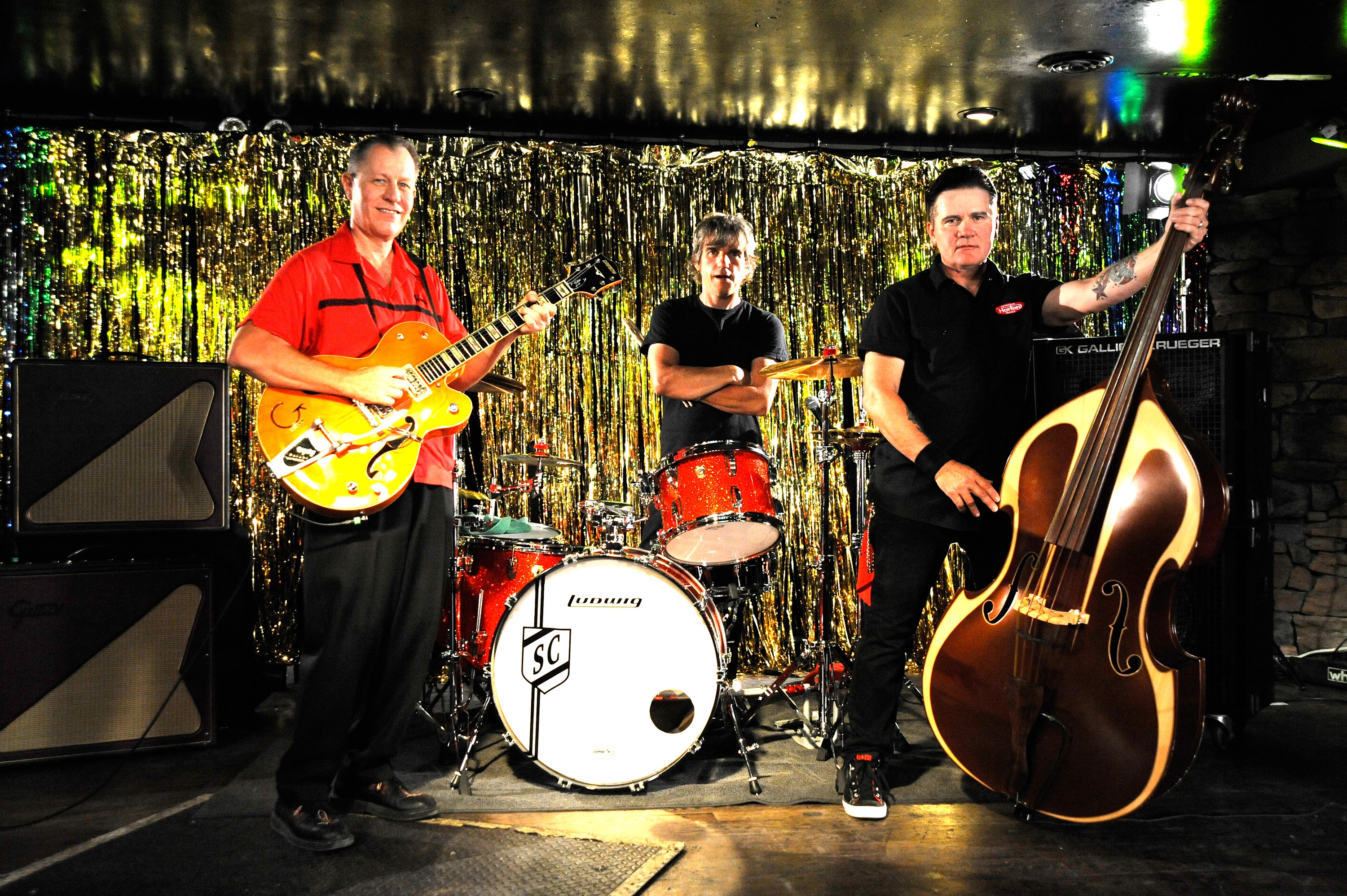 The good news is that Reverend Horton Heat and his howling beast of an upright bass player Jimbo Wallace are coming to town. The bad news is that they are doing it on a Monday. For the uninitiated, the lyrics to “Psychobilly Freakout” should serve as both band manifesto and proof positive that you should take your catnap and your Vitamin C after the closing bell rings Monday evening: “I’ll tell you what it is!/(‘What is it, God dang it!?’)/It’s some kinda Texas psychobilly freakout, that’s what it is!” Expect thinly disguised phallus euphemisms and filthy, rollicking surf rock riffs. The P-47s open the show. SS