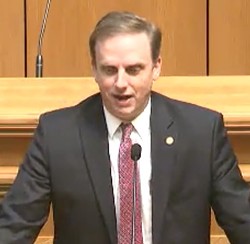 POLITICKING: Rep. Matthew Shepherd has reportedly been gauging support for another term as House speaker.

The legislature adjourns this week with little formal action expected, though quiet talk seems likely to continue about the future leadership of the House of Representatives.

Nobody wants to talk on the record about this, but this seems to be the current state of affairs:

House Speaker Matthew Shepherd apparently has decided to follow in the footsteps of Jeremy Gillam and seek a second term as speaker. That position won’t be quite as powerful given end-of-session House rule changes that took away total speaker control of committee assignments, but it would be very powerful still, what with control of the Rules Committee and ability to set agenda. Example: Shepherd’s play to the right-wing base in allowing consideration of a badly flawed sanctuary city bill in the waning hours of the session.

Potential challengers include Reps. Les Eaves and Joe Jett, the former Democrat who’s chaired the Revenue and Taxation Committee. Jett’s intention to run, regardless of Shepherd’s decision to run again, reportedly inspired some politicking. Roy Ragland, House chief of staff, reportedly was counting heads for Shepherd support during the final days of the session.  Staffers, by rule, are supposed to stay out of politics They work in theory for all House members, not just the speaker. In the end, the vote for speaker next year will be secret, so a head count is not necessarily a reliable indicator.

Neither Ragland nor Shepherd responded to my questions about the future speaker’s race and reports of politicking in Shepherd’s behalf. But that’s the scuttlebutt.