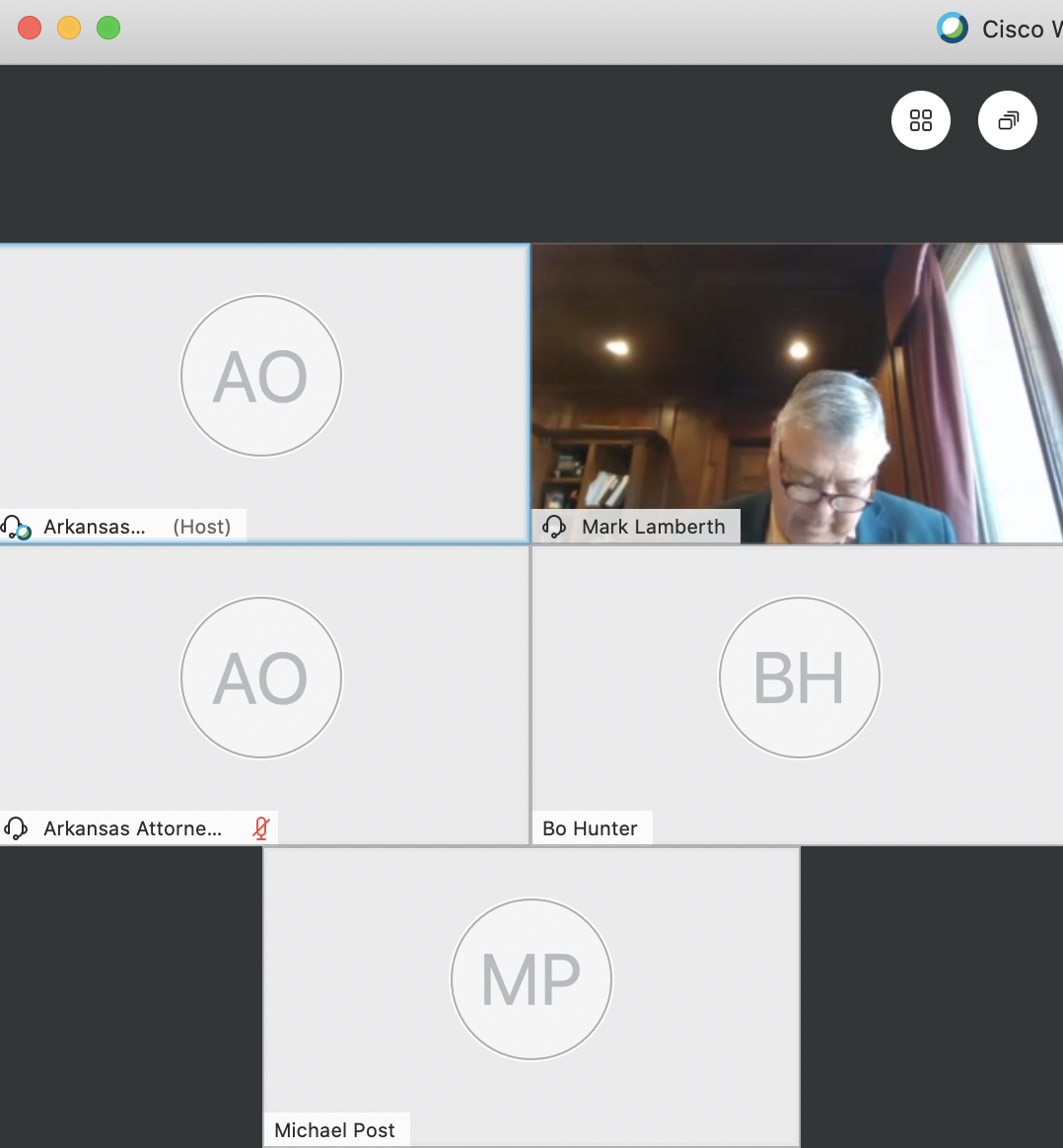 RACING COMMISSION: This is a screenshot of video conference in process. You had to have software and access code to sign in. It was a public meeting to a very limited degree.

The Arkansas Racing Commission decided today to hear casino applications from both the Cherokee Nation of Oklahoma and the Gulfside Casino Partnership of Mississippi.

A consultant will evaluate both applications and the commission will hear presentations from both.

Butch Reeves, attorney for the commission, recommended against an appeal. He said it would take 18 months with an uncertain outcome and the Commission would also have to forfeit the currently contracted services of a consultant hired to evaluate a casino permit application.

A ruling in another court case said the Racing Commission couldn’t open a second application period but could reconsider initial applications for “good cause.”

The Cherokee Nation then submitted an application with approval from the current Pope County Quorum Court and sought the “good cause” exception. That “good cause” was approved unanimously today so its revised application could be considered.

In a brief discussion before the motion and vote, Commission Chairman Alex Lieblong said it would be done in anticipation of an analysis of both Gulfside and the Cherokee Nation.

This is, in short, a big victory or the Cherokees, who promised $38 million in benefits to local governments and nonprofits to win Quorum Court approval. Gulfside has contended the initial application period should control, meaning it is the only qualified candidate.

I’m seeking comments from all. If you’re scoring, put the Cherokees in the lead politically, with a live application and endorsement of current elected officials (some voted out of office in the March primary for their pro-casino votes.)

“Gulfside is pleased the issue of our eligibility is now settled. We remain firm in the belief that we are the best choice for Pope County and for Arkansas, with 500 more permanent jobs and $10 million more in annual gaming tax revenue, all kept in state. We look forward to continuing to make the strong case for why we should receive the casino license.”

“We are extremely pleased with the Arkansas Racing Commission’s unanimous vote to accept our application. The decision to not appeal Judge Fox’s orders was completely within its discretion and understandable given the expressed desire to avoid further delay. We absolutely welcome the opportunity to have our company, its history and our application for Legends Resort & Casino Arkansas objectively scored and judged. We are confident the choice will be clear, as it has been in Pope County. Last night, the Atkins City Council joined Pope County Judge Ben Cross, the Quorum Court and four other Pope County cities when it voted for its Mayor to write a letter of support for CNB. We look forward to earning the Commission’s support on our merits and fulfilling our commitments to Pope County and the State of Arkansas.” – Chuck Garrett, CEO, Cherokee Nation Businesses

Here’s one wrinkle yet to come: If the Cherokee bid is approved and the “good cause” exception withstands a likely court challenge, expect another legal challenge tied to the $38 million payment to governments. By effectively requiring an acceptable payment in return for elected official endorsement, have local governments imposed an additional tax? Additional local taxes are specifically prohibited by the constitutional amendment that authorized new casinos in Jefferson and Pope counties, in addition to legalizing full casinos at Oaklawn and Southland.

There was little discussion before the votes, though one commissioner (I’m sorry. Mobile phone audio and an attempted video conference of the meeting left gaps in my understanding of who was speaking) made it clear the commission recognized some people in Pope County don’t want a casino at all, but it has no power to do anything but approve a casino applicant. Opponents are already in court.

Among other legal issues pending is an appeal of a circuit court decision invalidating a county ordinance that required a local vote before the Quorum Court could approve a casino application. The Quorum Court repealed that ordinance after striking the deal with the Cherokees.

Pope County Judge Ben Cross today added this letter from Rowdy Sweet of Atkins to the record. Sweet said he wasn’t pro or con on a casino, given the local vote against casinos in 2018, but said he hoped the Cherokee Nation would be considered if the process went forward.

This week the pro-Cherokee forces also produced a letter from a former Racing Commissioner Thomas Akin of Russellville criticizing the record of Gulfside. Arkansas is a small, friendly world. Akin is a Board member of the Chambers Bank, owned by the in-laws of Dallas Cowboy owner Jerry Jones. He’s a partner in the Legends hospitality business that would run the Cherokees’ casino resort.