North Little Rock native Nate Powell recently loaded up his daughters, ages 6 and 9, and drove the 555 miles from Bloomington, Indiana, to visit his newly vaccinated parents. It would be a short trip with a loose agenda to catch up on family time lost to COVID-19 restrictions and to show the girls some of the places they hear about when their dad recounts tales of childhood: the Old Mill, Emerald Park, the almost certainly haunted Woodson Lateral.

“I’m taking the stories I’ve embedded in them about my life growing up and showing them the physical locations, showing them it’s part of a real, interconnected world,” he said. “As each of my kids grows and gets more literate and interested in the world, it’s been awesome.”

Sharing these formative scenes with a new generation is part of a conversation that, for Powell, spans both the personal and the professional. As he unspools a dialogue with his daughters about a shifting world lately gone so awry, Powell has been capturing with paper and ink what it’s like to be in the generation sandwiched between true-believing baby boomers and the skeptical youngsters who knew American exceptionalism was a myth all along. “Save It For Later: Promises, Parenthood, and the Urgency of Protest” is an autobiographical yarn by a parent hoping to right some wrong turns on an arc of the moral universe his generation always expected to shoot toward justice.

Powell created his first comic book at age 14, and is now up to 40 or 45 in all if you count those early models. His most well-known is “March,” a three-piece anthology about civil rights icon John Lewis. Topics varied for Powell through the decades, but this vegetarian punk rocker of ’90s Soophie Nun Squad fame never strays far from social progress and justice, themes he took to heart as a kid while reading the entire X-Men canon.

You’ll find no bodysuits or superhuman acrobatics in “Save It For Later,” which comes out April 6. This book is about the work of parenting, which is arguably just as hard. But it’s not meant to be instructive, as Powell makes clear in his introduction. “Let’s get something outta the way, so we can better get in the way: This is not a parenting book or an activist guide — that isn’t my place.” Instead, Powell said, he’s sharing his own experience in solidarity with others he knows have felt confused and lost in recent years. “One powerfully damaging effect of living through this era of disinformation and authoritarianism is doubt quietly cast over our own memories, our senses, our critical thinking, even trusting our emotional response to that darkness. You’re not alone. None of us are. My family’s experience likely echoes some of yours.”

Powell lives in a Midwestern college town now but the social challenges he and his family grapple with in his new book, and in real life, aren’t much different than they would be if they lived in Arkansas. “It’s very hard for me to get rid of the notion that this place where I haven’t lived in 17 years is not my home. Arkansas is my home, I’ll tell it to anyone,” Powell said. And his time spent living outside the region where he grew up helped him realize a lot of the struggles he thought were unique to the South can be found throughout the country. For example, he said, the nominally progressive college town where he lives has a significant Nazi problem. “There’s a reason why the South is always sold as the backward, racist part of America. It allows much of the country to continue what it’s doing, with the South as the scapegoat.”

If you’re a Gen X parent with an uncontainable streak of progressive zeal, “Save It For Later” will call you out. Have you ever taken your kids to a protest, or tried to explain to them that a lot of the people running the show around here aren’t good guys? Have you ever wobbled on that parental highwire balancing act between self-righteous blowhard and negligent philistine, and erred on tipping to the left? If so, you will find yourself in these pages.

Powell marked off the next six months or so on his calendar for talking about his new book, but has a couple of next big things already in the works. One is “an interdimensional time-hopping relationship story that centers on a punk band in the 1990s,” that will explore the “changing dynamics of friendship and creative collaboration.” Another project, which he can’t yet say much about, is a graphic adaptation of what Powell described as an influential book about the teaching of U.S. history. 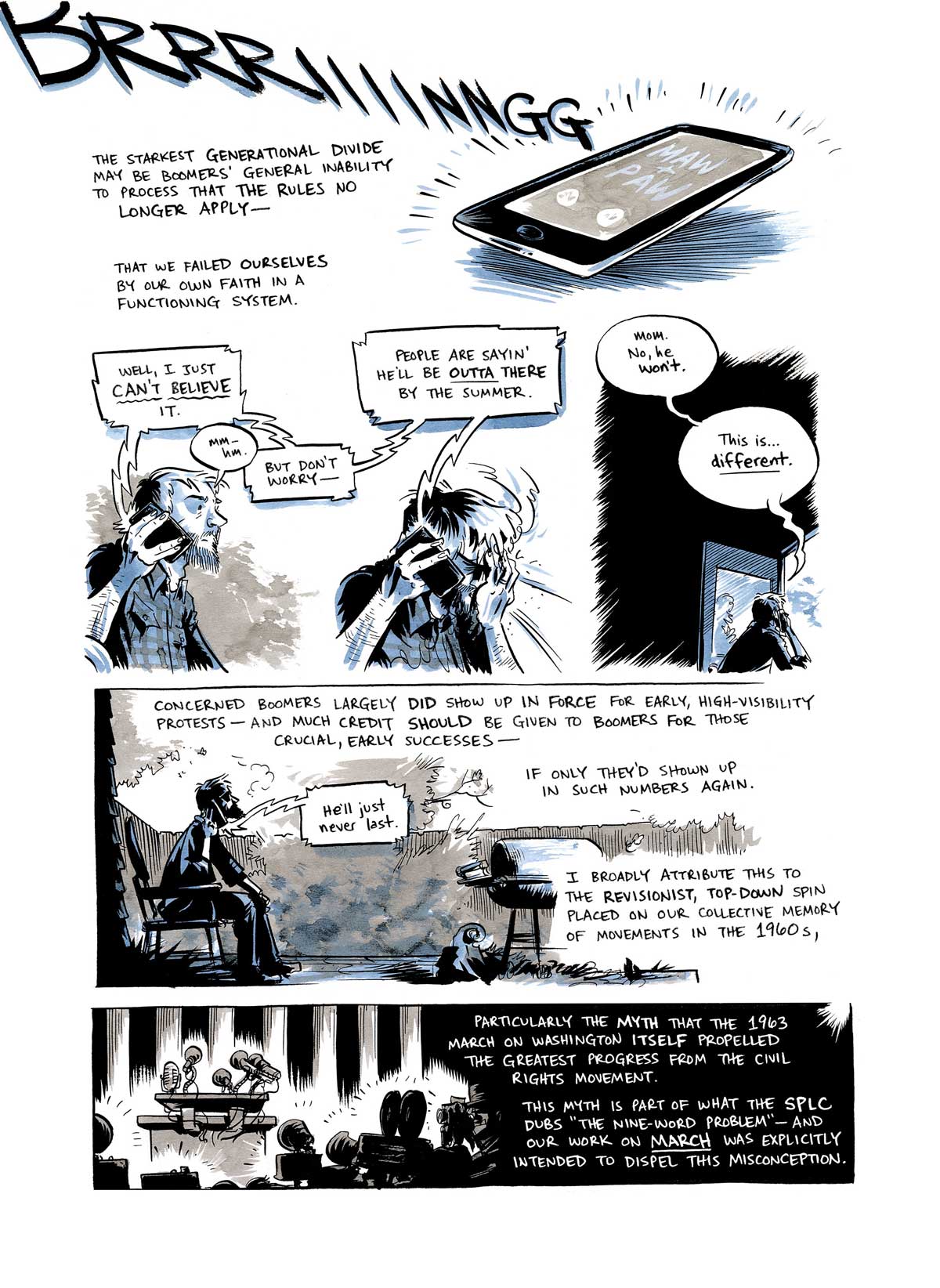 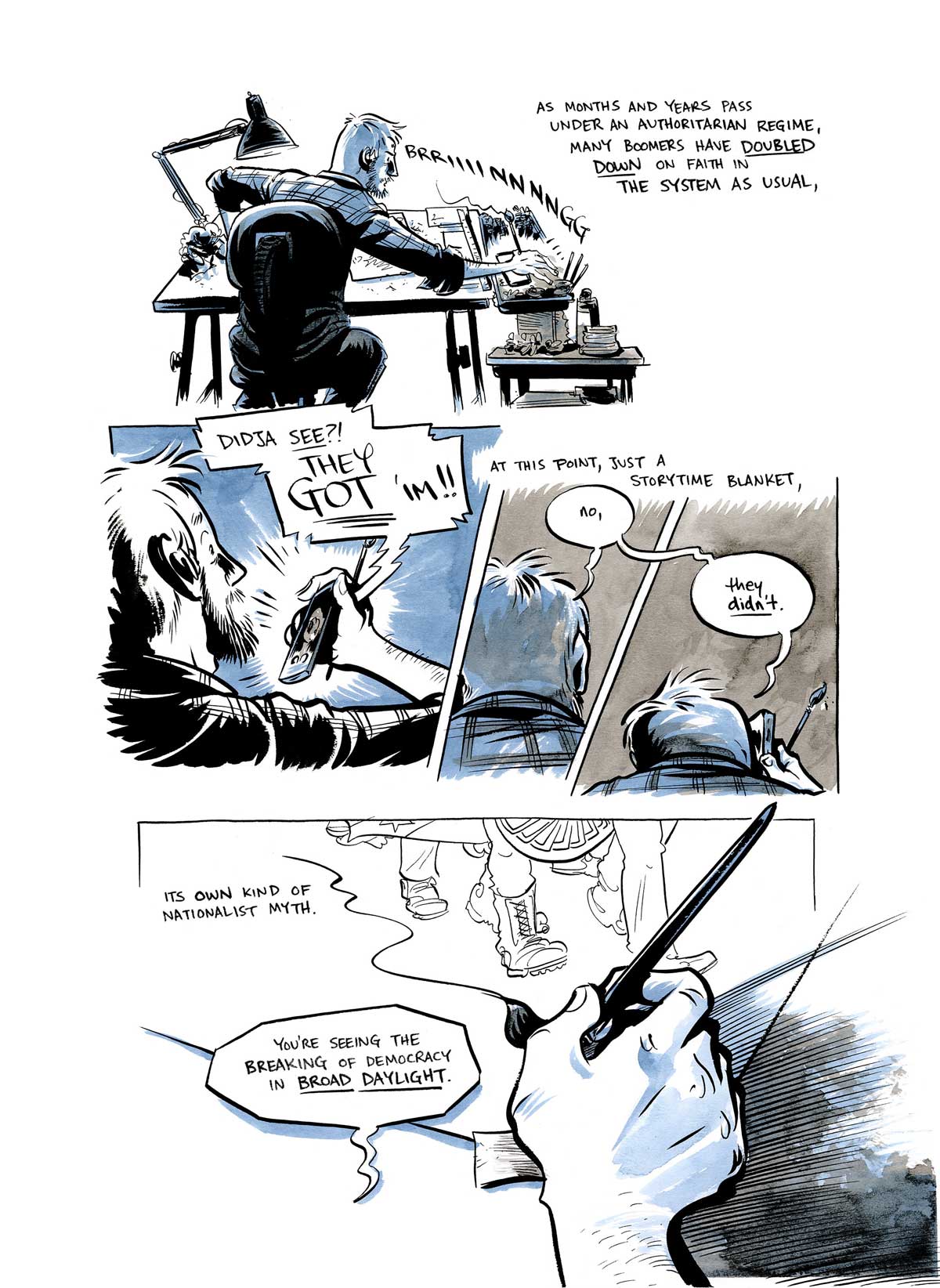 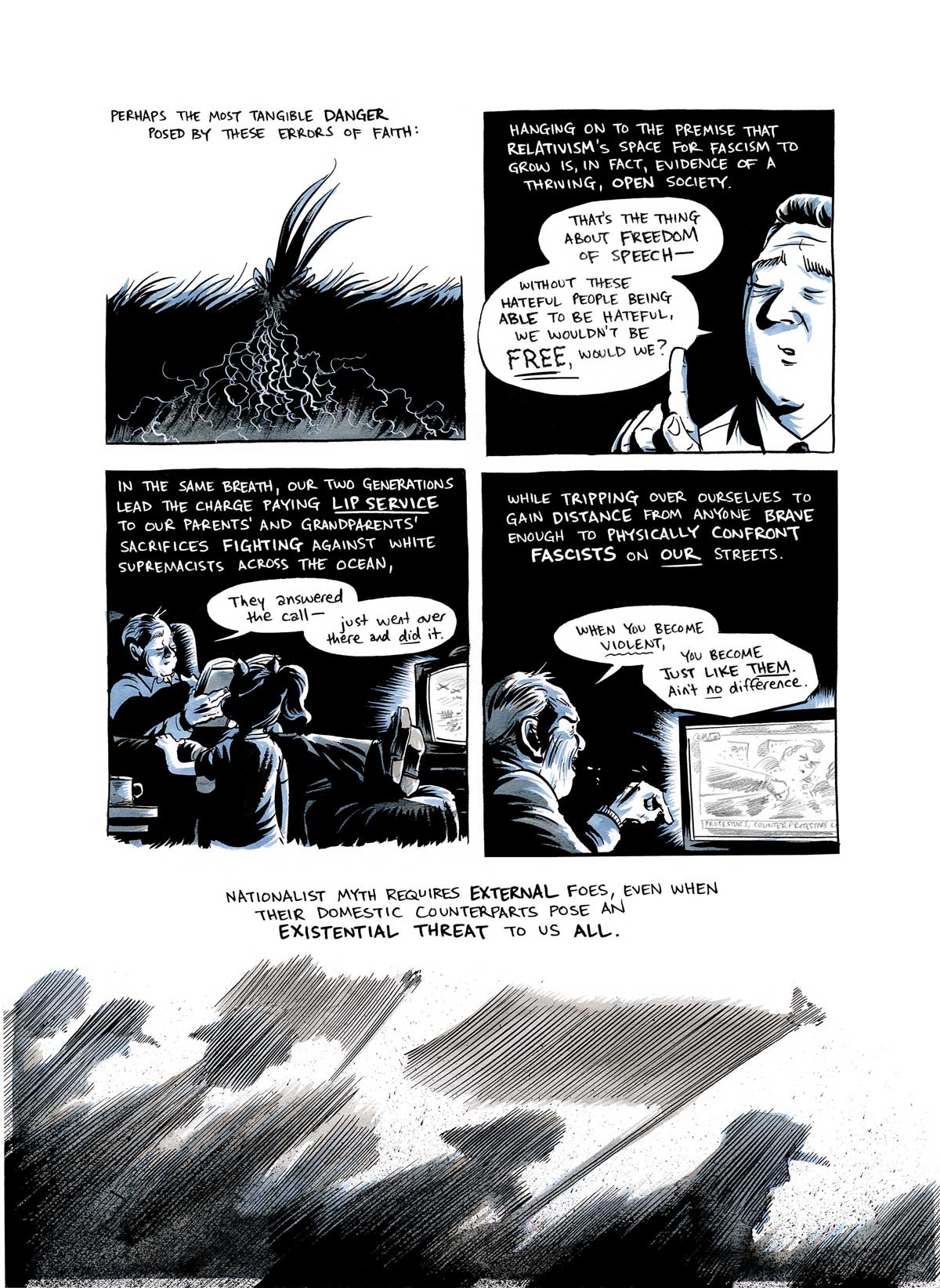 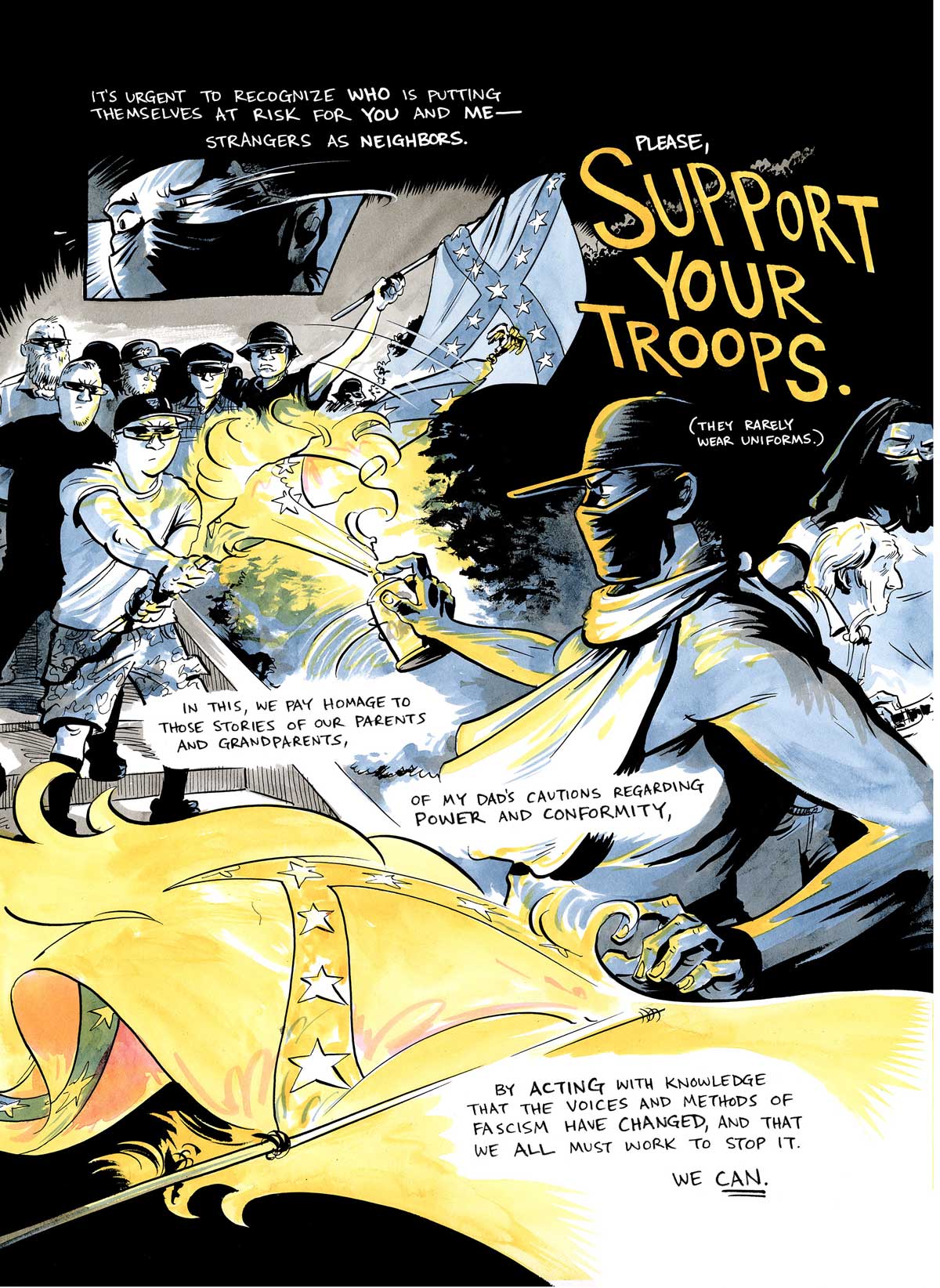 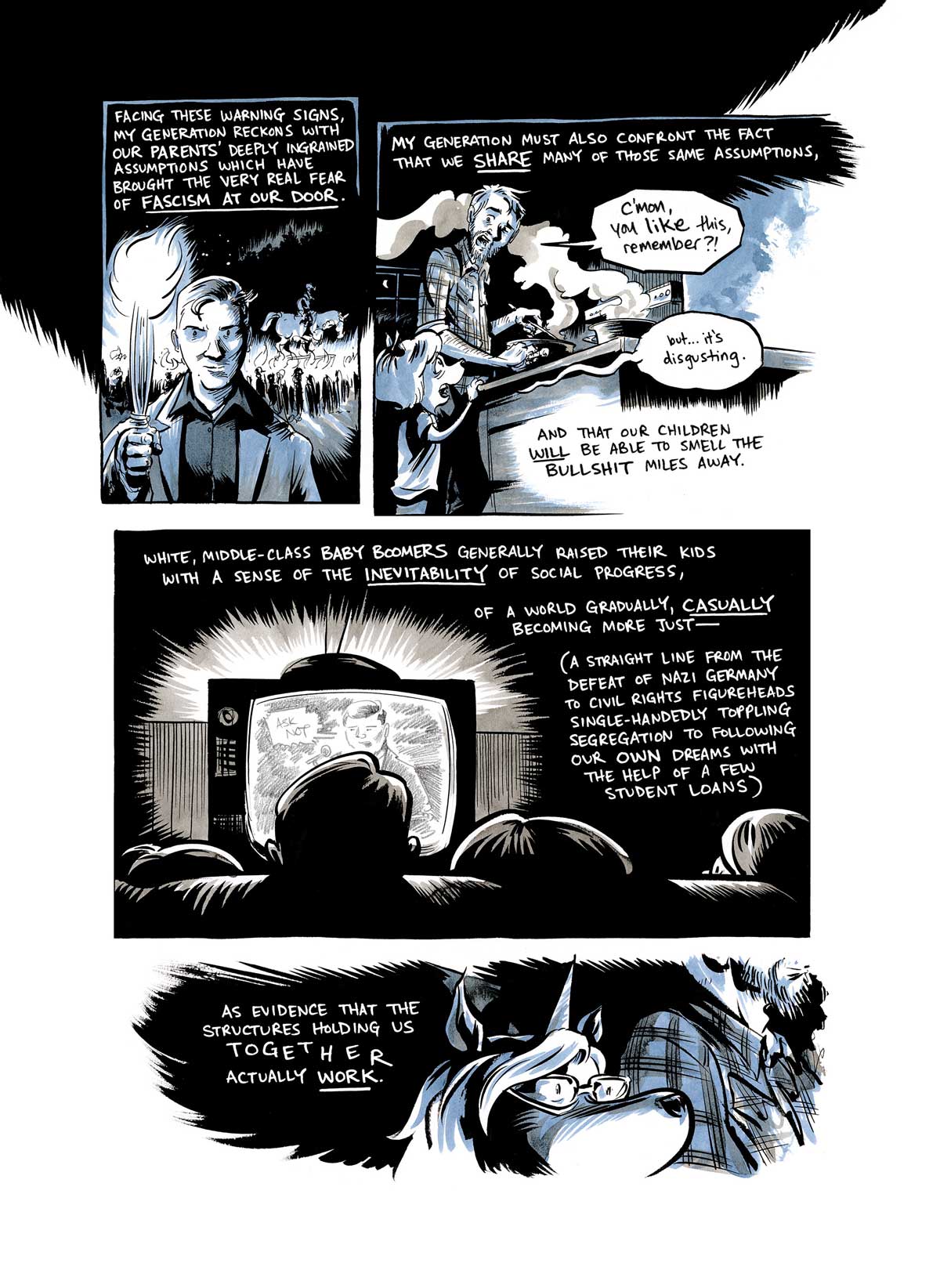