It was a cloudy day last Wednesday, so the members of the Science and Math Club could not use the analemmatic sundial they had built in front of their school to tell time. It might be the only analemmatic sundial — in which a stylus (you, for example) stands in a particular place (on the September brick, for example) and looks to see where the shadow crosses an arc of numbers, from 6 a.m. to 6 p.m. — in Arkansas, and it works, teacher and students promised. The school, the Arkansas Consolidated High School at the Arkansas Juvenile Assessment & Treatment Center in Alexander, whose students “have been invited to attend by the courts,” as Principal Amy Mejia put it, is also the first to implement the Arkansas A+ Schools teaching method at the state’s system of schools for juvenile offenders. The A+ approach, which uses the arts to teach across the curriculum, is a project of the Thea Foundation, which has trained Arkansas teachers in the arts-infused method since 2011.

Math teacher Dan Long said the sundial project required math skills (from algebra to pre-calculus), the creation of schematic drawings and construction, and students documented the project with scrapbooks, making it the kind of ideal multidisciplinary approach that A+ promotes. It’s a style that Long, who has taught for 47 years, the last five post-retirement at the treatment center, already embraced, one he considers a “fantastic” way to teach. He said the faculty came back from their A+ summer training “pumped up,” and that the experience had brought the faculty “closer together.” Mejia agreed: “It has energized our campus … we work better as a team.”

The idea to try A+ was Superintendent Brett Smith’s. Now in his sixth year as superintendent of the Division of Youth Services’ Arkansas Consolidated High School, Smith was introduced to Thea Foundation director Paul Leopoulos soon after coming to Little Rock. A+ “sounded to me like something our students would benefit from. Our students are artistic and they are kinesthetic learners — they learn by doing,” Smith said. “If they’d had this in my day, I might have been able to learn algebra.” 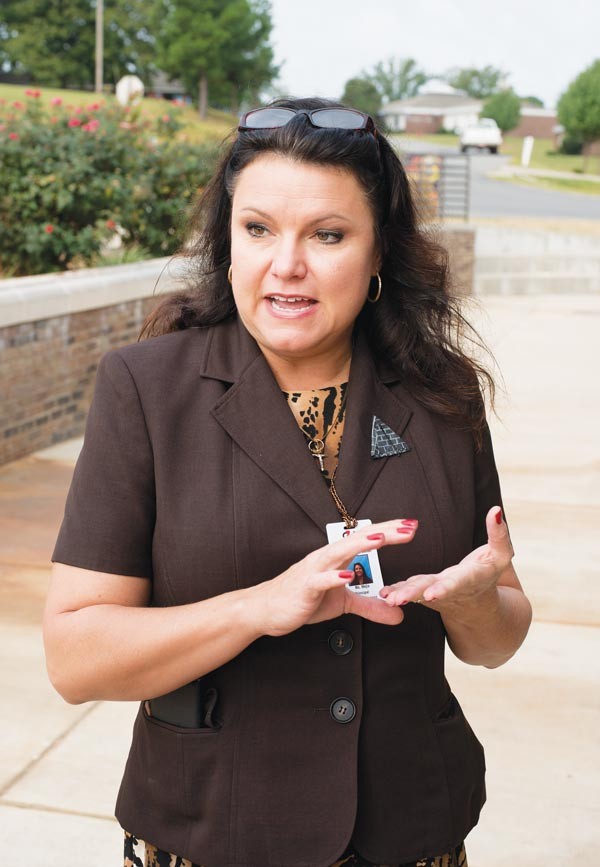 The A+ model requires an 85 percent buy-in among teachers at schools that adopt it. That’s because A+ can dramatically change a way a teacher teaches. At Alexander, 100 percent of the teachers wanted to try it. Mejia said she will assess the program’s success by measuring the year’s gains in academics and student engagement against the year previous.

Because the school is in a controlled situation that provides consistency — “they get three meals a day here, they get their medications here,” Mejia said by way of example — the average achievement improvement over a year is three grade levels. That doesn’t mean students come up to the grade level they should be in — but it’s big step. The AJATC school, which is part of the Arkansas Department of Education and uses the Common Core curriculum, is the pilot school for the implementation of A+; if it shows success, Smith said, it might be implemented at the five other schools DYS operates for children in the juvenile system.

The AJATC school is “like a school ‘out there,’ a real public school,” Long said, with the math and science club, a newspaper, a choir, a drill team and a farm with plans for chickens and an orchard already planted. Long said AJATC provides a “good foundation” for kids going back to their free world schools.

Forty to 60 percent of the kids at AJATC need special help with math. This year, students in the basic math class learned to read graphs by creating their own, assigning numerical values to their personal characteristics (far more interesting than abstract numbers), thus creating “personality assessments.” Students studying Mesopotamia in history class inscribed letters from Sumerian alphabet into plaster and created three-dimensional pyramids. Mejia proudly wears a two-dimensional pyramid made for her to wear by a student; she was thrilled that the student took the class exercise a step farther by creating something of her own from the lesson.

In an English class, students are making origami bears and boats and other objects referred to in the book they’re reading, “Touching Spirit Bear,” about a juvenile delinquent whose life is changed by a year he spends on an island in British Columbia. Teacher Catherine Blocker was showing them a video on a related subject when a reporter visited. Later, though a couple of students had their heads on their desks, three girls were eagerly doing origami (which also introduces math concepts) and talking about the book. Blocker’s always used supplemented reading with activity in her classes: “It gets the kids interested. … They don’t want to be here. They don’t want to be in school. And they don’t want to be in English class. … I always try to do what I can” to reach them.

Arkansas Consolidated High School has been accredited for two years. “That’s part of what I was tasked to do” when he was hired, Smith said, “getting the curriculum up to speed and the building process and technology.” Thanks to stimulus funds, each campus has either a new schoolhouse or an updated one.

The AJATC campus is the only one behind a fence; its 100 residents have been adjudicated for treatment based on all manner of crime, but Mejia stressed that the campus “is a treatment center, not a detention center.” Which school the students in the care of DYS are sent to is determined on individual needs; the school at Lewisville, in Southwest Arkansas, has a vocational focus with a large greenhouse and small engine repair shop; kids at Alexander are often in need of special education. Students who have their high school diplomas or GED attend career-focused classes and participate in on-the-job training in the World of Work program.