Like most local people, maybe, it’s been about 10 years since I went to see the permanent exhibits at the William J. Clinton Presidential Center. Temporary exhibits, yes, and lunch at Forty Two, yes. But no trip to the replica of the Oval Office or the gifts to the country or letters to the president.

Last week, I decided to go back to see those exhibits, largely unchanged since 2004, again. There is the huge screen that shows scenes from the 1993 inauguration, a larger-than-life Maya Angelou reciting her poem, Bill and a sparkling-blue-gowned Hillary dancing and smiling and 22 years younger. The Oval Office, whose ceiling Clinton had rebuilt to make higher, his memory more accurate than the exhibit builder’s, with its bust of Franklin D. Roosevelt on the replicated Resolute desk. The economy exhibit, “From Deficit to Surplus,” with its ticker-tape display and its reminder that Clinton balanced the budget and erased the deficit. Hard to imagine. The exhibit on terrorism, which notes the number of countries (20) from which “al-Queda cells” had been eliminated, and the appeal to Clinton from the Middletown, Ohio, woman whose brother was killed in the Oklahoma bombing, asking that he bring the bomber to justice. The quaint computers in the technology exhibit. The eloquent impeachment exhibit (“The impeachment battle was not about the Constitution or the rule of law but was instead a quest for power that the President’s opponents could not win at the ballot box”) and the transcript of Clinton’s apology (“I have done wrong”), a reminder of the partisan obsession over the president’s sexual misdeeds, so ugly at the time but nowhere near the tenor of today’s partisan hatred of Clinton’s black Democratic successor.

The lead-up to the opening of the Clinton Center 10 years ago was fraught with a kind of drama, thanks to the battle with the landowner over the city’s claim of eminent domain, lawsuits over city funding, the threat of an anti-Clinton museum. It was also a time of great anticipation and excitement, as the library (as it’s most often referred to) rose from the ground. The opening ceremony, on Nov. 18, 2004, while sodden — there was a daylong downpour for the outdoor event — brought huge numbers of celebrities to town, along with President George Bush, his father and Jimmy Carter, gamely huddled under umbrellas. The library opened to much acclaim, its design and exhibits impressive, despite the ribbing that the long glass and metal frame looked less like a bridge to the 21st century than a trailer. Its sleek design, however, has worn well. 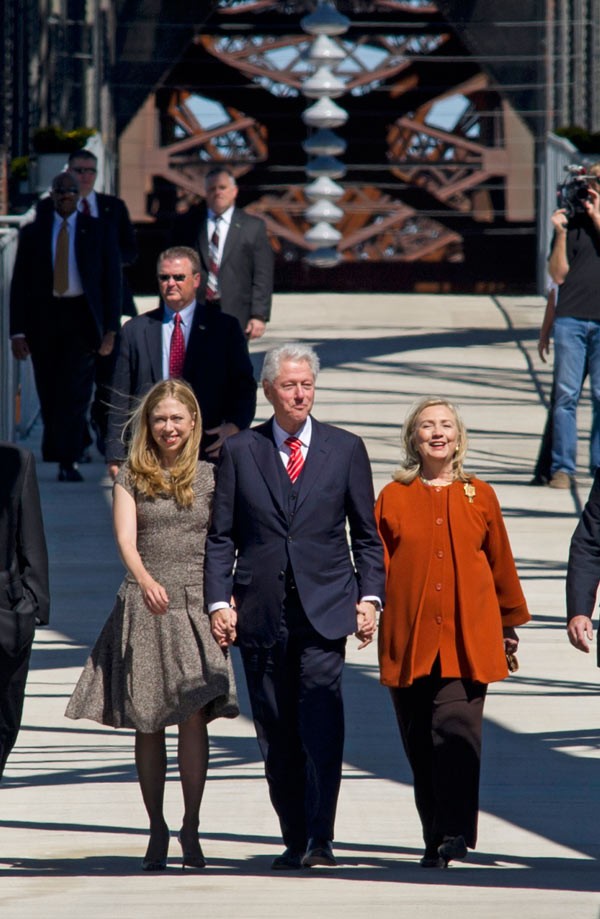 In the decade since it opened, there have been 3.3 million visits to the library, with yearly counts increasing every year since 2008, coincidently when another Democratic administration came in. Arkansans keep coming back for the temporary exhibits — Madeleine Albright’s famous pins, the exhibit of 30 Oscar de la Renta gowns, an exhibit on the St. Louis Cardinals baseball team, the current exhibit of glass by the famed Northwestern artist Chihuly, his trademark seashaped vessels and glorious sketches glowing in a gallery darkened to heighten the effect.

A huge draw to the public is the distinctive speaker series offered by the school Clinton founded on the Clinton Center grounds: the University of Arkansas Clinton School of Public Service. The school opened in the old Choctaw train station simultaneously with the library in 2004 and admitted its first class in 2005. It has graduated 221 students, with classes growing from 16 the first year to 40 to 50 a year now. The school’s speaker series, which Dean Skip Rutherford credits Sen. David Pryor with creating and Nikolai DiPippa with its continued success, features speakers from across the political spectrum and touching on all issues of intellectual inquiry. They have ranged from Sen. Bob Dole, who inaugurated the series, to speakers like Joan Cashin, who spoke on Southern women and the Civil War; Bob Hupp and panels of actors previewing upcoming performances at the Arkansas Repertory Theatre; former HUD Secretary Henry Cisneros on housing, James K. Galbraith on the economy. John Hibbing on the biology of political differences. James Veteto on culture and barbecue in the South; Dr. Sanjay Gupta on medicine; Mary Matalin and James Carville on politics. Arthur Agee of “Hoop Dreams,” for a 20th anniversary talk, Ben Cohen of Ben and Jerry’s Ice Cream on education. From Clinton’s defeated GOP opponent to the genius behind “Stephen Colbert’s Americone Dream,” speakers have included 39 ambassadors, 21 Pulitzer prize recipients and seven Nobel Prize winners and presented a total of 924 programs to date, talks attended by more than 159,000 folks. 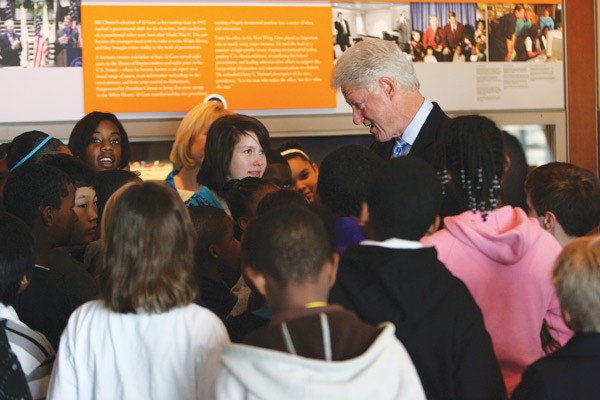 The Clinton Center’s educational program, directed by Joyce Willis, has drawn thousands of schoolchildren since it began offering programming in 2006. From October 2013 to September 2014 alone, 35,585 schoolchildren from all over Arkansas came to the library. If schools can’t afford the bus ride, the Clinton Foundation will provide grants to pick up the costs.

You might think that school kids might not thrill to the replica of the Cabinet room and touch screen displays that tell the story of Kosovo or welfare reform. But Willis provides civics teachers with materials to prepare kids to role-play in the Cabinet room, and that makes all the difference. Kids from Carlisle or McGehee or Mount Ida — some of whom have never been to Little Rock, much less Washington, D.C. — assume the characters of the president and the secretaries to act out the decision-making process. In summer, there are weeklong camps, like space camp.

Every February, students at Parkview Magnet High School for the Performing Arts perform an original black history program; the program in 2015 will focus on the 150th anniversary of the end of the Civil War. Younger kids visiting the Chihuly exhibit have learned about color and written poems about art. Next semester, students at Little Rock Preparatory Academy will have civics and history lessons twice a month at the library.

In all, more than 200,000 children have spent time learning at the library.

Outside the building, the Clinton Presidential Park’s beautifully groomed 30 acres, with their earthen peaks and valleys, the wetlands restoration and the remaking of the Rock Island Railroad Bridge into a pedestrian and bike crossing over the Arkansas River draw kids on cardboard sleds and nature lovers and cyclists and people seeking a place of quiet green space.

Some would say the greatest impact of the Clinton Center has not been in the way it has elevated our cultural life and our national reputation as a place with an intellectual pulse, but as a driver of the economy, perhaps the greatest dynamo to Little Rock’s vitality ever.

In 1996, the year before Clinton decided to build his library at the end of Markham Street, the once-derelict business district was already undergoing change for the better, thanks to the multimillion-dollar, taxpayer-funded creation of the River Market and Museum Center, the building of the Verizon (then Alltel) Arena across the river and Little Rock’s expanded Convention Center. Central Arkansas Library System Director Bobby Roberts had made the significant move to put the Main Library in the old Fones warehouse. More development would have come, but slowly. The Clinton library was oxygen to that ember, lighting a fire of development that today is spreading south of the River Market district and on to Main Street. Or as Rett Tucker, who with Jimmy Moses has developed much of the River Market district, likes to say, “We were grinding out the yardage, and the Clinton library was the 50-yard pass moved us way down the field.”

Development just as and since the Clinton Center opened in 2004: The Courtyard Marriott, which opened just in time for the dedication of the new library. High-rise condos at 300 Third. River Market Tower, another high-rise condo development that includes a grocery and a pub on the ground floor. The Capital Commerce Building at River Market Avenue and Third Street. The Axciom building. Heifer International. The Arkansas Studies Institute, across the street from the River Market, which houses the Butler Center for Arkansas Studies and Clinton’s gubernatorial paper and classroom space for the Clinton School. The new Arcade Building, with its state-of-the-art theater and the Little Rock Film Festival headquarters, along with a new restaurant and retail. The Residence Inn, another Marriott development. The Hampton Inn and Suites. The Hilton Homewood Suites, going up at River Market Avenue and Fifth Street. The MacArthur Commons apartment development by Moses Tucker. 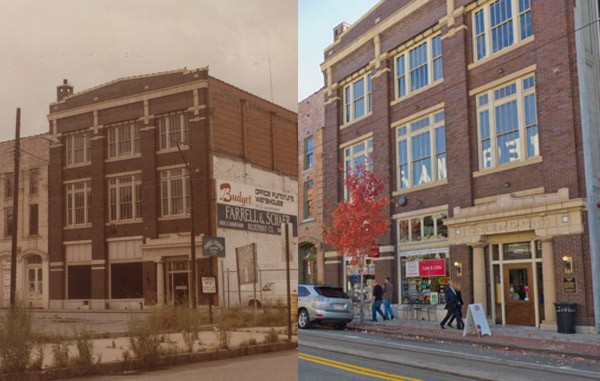 The Clinton Foundation estimates that the Clinton Center has brought more than $2.5 billion in economic development to downtown Little Rock. The Little Rock Regional Chamber of Commerce is working on its own study of the library’s impact. The Little Rock Convention and Visitors Bureau says tourism tax revenues have risen 64.5 percent since 2003, and the number of tourists in 2013 — 4,752,929 — topped 2003 numbers by 1.4 million. Joe Capuzzello, who helps destination planners choose cities to promote and has held conferences here four times since 2006, said the Clinton Center is “a pretty big piece” of the promotional package. “Wherever you fall politically, Clinton is an icon, part of Americana.”

Skip Rutherford recalls a day in the library when he overheard a child telling his teacher that “Someday I could grow up to be president.” That’s exactly what Bill Clinton hoped the Clinton Center would do: Think about tomorrow, and what could be.