For Timothy Jones to obtain a new driver’s license — his first in 14 years — it required a payment of $1,500 in old fines, a month of nearly daily calls to multiple courts throughout the state, a birth certificate, a prison release statement and a copy of his old ID.

Like many people recently released from the Arkansas Department of Correction, the Malvern native was told getting an ID would be a crucial first step to after incarceration. But he was also told it would be difficult.

Despite identification often necessary for employment, transportation, social benefits, cashing a check, opening a bank account, and even most food pantries, it’s usually a costly, bureaucratic process to obtain one.

This is especially true for a driver’s license, crucial in a state like Arkansas without much public transit.

Reasons for difficulty vary from person to person. But Jones’ story of getting his driver’s license shows how the process frequently requires money, organization and persistence.

He considers himself among the lucky.

Before his parole, Jones was able to get a job at the Essick Air store, and transportation to work, because of his participation in Hidden Creek, an Arkansas Community Corrections re-entry program in Little Rock. It allowed him to put money in savings before his full release. Most paroled in Arkansas only get a card with $125 upon release to restart life.

“That’s all they give you and tell you to be on about your way,” Jones said of those in the Hidden Creek program. “[Then] you got to get the license to get the job. And, just, that’s hard. That is hard.

“If it wasn’t for this program — no way in the world I would’ve been able to save up $1,500 like that just to give them for an ID, for a little card.”

The $1,500 was needed to pay off old fines, a common problem for those leaving prison.

Courts from across the state notify Driver Control in the Department of Finance and Administration of outstanding debts from traffic tickets and court costs, placing a hold on license issuing. Those debts can be formidable for persons looking to make a new start.

“It started off like $500 that I owed,” Jones told the Arkansas Times. He’d misplaced his license a few years after getting it in 2004 and didn’t get a new one and didn’t renew. He kept driving, quickly racking up fees. “And it just started going up, up, up, up.” But to work, he had to drive. To drive, he risked another ticket.

Even before his recent incarceration (for possession of a handgun), it became unimaginable that he would be able to pay. He went to the state Revenue Office a month before his arrest and asked the attendant how much it would cost to get a new license; the man laughed when he looked it up, the number was so high.

But after his incarceration, Jones was committed to re-entry. He worked and saved to bite away at the debt. Eventually, he paid it all off. He then called Driver Control eager to hear that there were no longer holds on his license.

The office said there was still a hold from Hot Springs.

But Driver Control records still showed a and wanted verification on a form that Jones owed no fines.

The Hot Springs court told him they didn’t have a form for such action.

Courts would be closed. People wouldn’t pick up. Administrators would be rude to him.

“I mean, it was just so frustrating, because when I get home from work, I am tired, too, like everybody. And there’s a line of people right here,” Jones said, pointing to one of a few phones in the hallway where many at Hidden Creek wait to communicate. “And by that time anyway, even when I’m off, everybody is gone … [the court’s] closed.”

But after a month, an administrator in the Malvern court grew tired of him calling, Jones said. She called Driver Control, she called Hot Springs, and she got that court to remove the hold. (She told him there had been a typo on the ticket: It was given in Hot Spring County but the ticket said “Hot Springs.”)

Rachael Borné, re-entry program manager at Our House, where she helps those leaving prison, said the process for dealing with court systems is often an issue.

“We’ll work with clients who have failure to appear, failures to pay, traffic tickets from many different counties. That requires them to call all of those counties, making an official request via mail or fax to get information. Then complete various requirements for each of the counties, [with] various payment methods. So, it is just almost impossible for any person to wrap their head around that,” she said.

Borné said there are other financial obligations old fines and fees: the $35 a month fees parolees have to make (more if paid online); any classes required as part of release; the need to find housing.

“This theme of navigating a system not having one set path repeats itself over and over in the world of re-entry. Because it’s a person having to make their way through these overlapping systems of law enforcement, of the court system, of social services, of public benefits. And they all in some ways inhibit each other, so it’s never the same answer for one client on how they’re going to get an ID,” she said. “It’s really hard to figure out what you need to do.”

A new law on the books partially addresses the license problem. State Rep. Clarke Tucker (D-Little Rock) successfully introduced a bill that allows persons released from prison whose driver’s licenses had been suspended to get restricted licenses that allow them to drive to work, school and other approved places.

Persons on parole or probation and inmates 180 days from release may get the restricted despite outstanding fines or fees.

Though it would not have addressed Jones’ problem — his license was expired — it makes a difference for those whose licenses were suspended.

Parole officers within Arkansas Community Corrections, which oversees those on parole and probation, will provide the license.

“It’s been a big initiative for us,” said Kevin Murphy, chief deputy director of ACC. “Everybody should know if [those recently released] don’t have a driver’s license it makes it very difficult to get work, but also all the other things like renting an apartment. … It’s a circle, just a circle.”

ACC said parole officers are beginning to talk to their parolees about getting a license. Of the approximately 500 parole officers, 87 now have access to an electronic system to provide the license. As of Feb. 9, 47 restricted licenses have been given to parolees.

“It’s just like any huge program, it takes a while,” Murphy said. But ACC is hopeful and aware of the problem of license and ID difficulty.

Importantly, the restricted license also requires the person “be in the process of paying any outstanding court fines,” DFA spokesman Scott Hardin said. Which still means coordination across the many court systems in Arkansas — if not outright full payment — is required to get a restricted license. 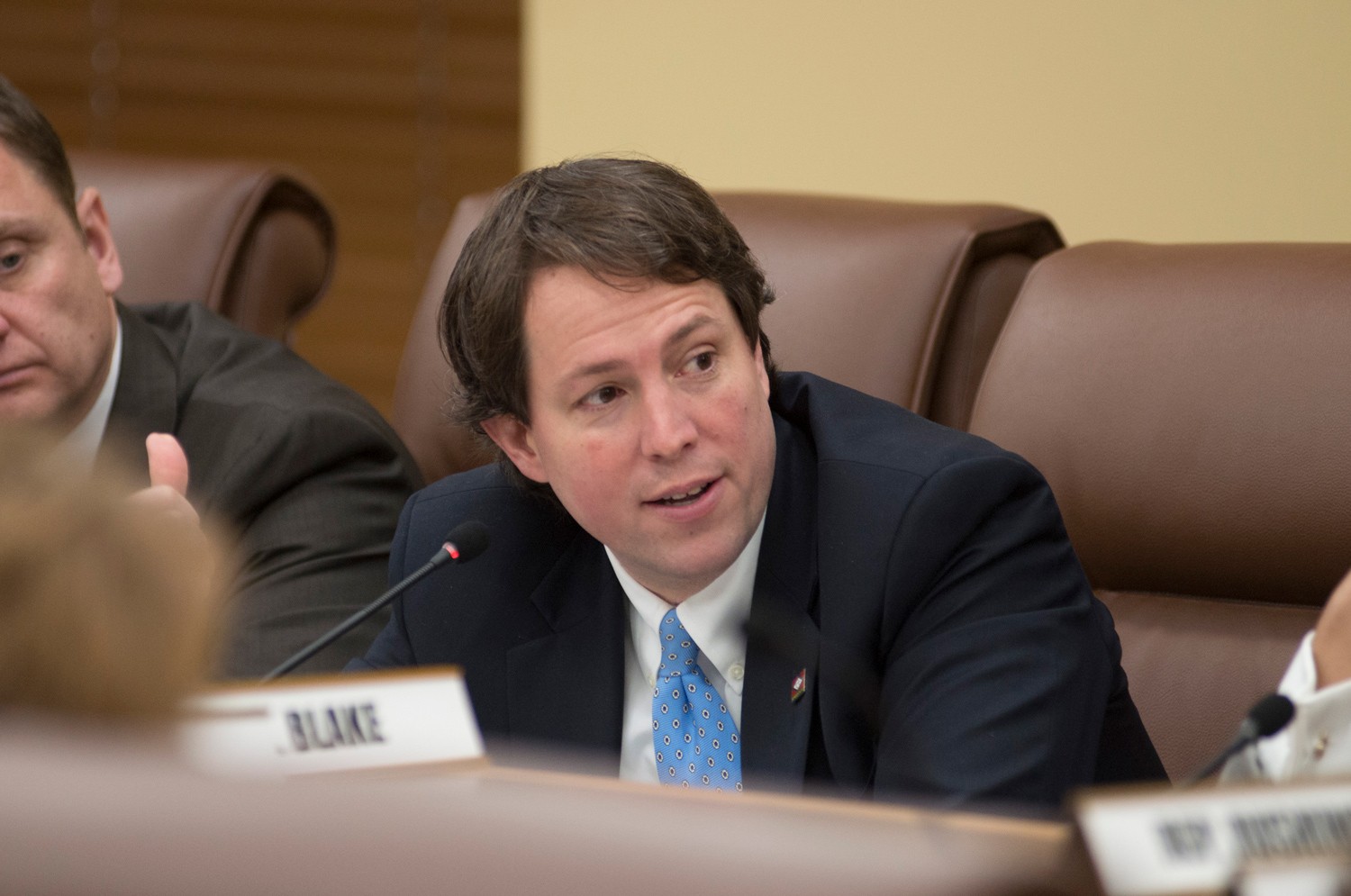 “It doesn’t catch everybody. I wish it could catch more,” Murphy said.

The ACC tries to help former inmates who can’t get driver’s licenses to get a state ID. But that has its obstacles too. “You’ve got to have proper previous identification,” Murphy said. Sometimes those forms of ID — such as birth certificates or passports — are hard to get. Lower forms of IDs — a prison release statement, court orders, work ID — can be used, but getting those documents also takes money and time.

“It’s just like this undue burden on someone who’s trying to just get an ID — which is something that they possibly have the right to have. And it is definitely a deterrent for people. Because there is potentially an element of fear of navigating this whole system,” Miranda Deaton, a re-entry case manager at Our House, said.

Jones described the process of getting his license in similar terms: “confusing,” “nerve-racking,” and “a lot of anxiety.”

But now with in his hand, Jones said he can begin imagining life after Hidden Creek. He talks about taking his daughters (13 and 8) to their sports games and holding down his job in Little Rock. “I can take my kids to the park, I can take them to a movie. I can take them to their game,” he said.