The first thing you notice when you walk into the nondescript West Little Rock strip mall storefront that is home to Steep Hill Arkansas is the smell of cannabis. Not weed smoke, as nobody there is partaking. Just the heady, skunky, somewhat sour-sweet scent of ganja.

Steep Hill Arkansas is the only Arkansas Department of Health-certified cannabis testing lab in the state. Because of that, Steep Hill winds up with a small, very aromatic sample of every cannabis crop grown legally in Arkansas. From there, the lab runs each sample through a battery of tests to determine both the desirable and the undesirable within it, including THC content and any potential contamination, before reporting its findings back to the health department. The health department, in turn, reports back to growers whether a crop has passed or failed. In short, if you’re a patient who has used legal cannabis since the dispensaries opened for business, you’ve got Steep Hill Arkansas to thank for making sure the products you tried are as safe as they can be and as potent as advertised.

Dr. Brandon Thornton, Pharm.D., is the co-owner and CEO of Steep Hill Arkansas, which is part of a company with labs in cannabis-friendly states across the nation. A pharmacist who has worked in large-scale pharmaceutical operations in several states, Thornton and Steep Hill Arkansas have been in fire-drill mode pretty much constantly since Arkansas’s first cannabis cultivation centers started shipping product in the spring of this year. It’s a demand that Thornton said often has him in the lab long after midnight, swapping out sample vials in automated testing machines to keep up with an ever-accelerating schedule. Since its official opening in December 2018, Steep Hill has increased its staff from four to seven, Thornton said. It plans to hire more people soon to keep up with demand as the medical marijuana industry continues to blossom in Arkansas.

After a cannabis crop has been harvested and dried at a cultivation center, Thornton said, a representative of Steep Hill Arkansas personally visits the facility and randomly selects one-half of 1 percent of each batch. In Arkansas, a “batch” is limited to a maximum of 10 pounds of dried cannabis. Thornton said the average batch size in the state is around eight pounds, so the samples Steep Hill collects average around 20 grams. That’s a little less than three-quarters of an ounce.

Once the samples are returned to Steep Hill’s Little Rock lab, they’re electronically checked in and then prepared for testing in various ways, including treatment with acids and solvents. The process renders the samples unusable as a drug. Thornton said any cannabis that remains in a potentially intoxicating form after the samples are prepared is destroyed. For security reasons, he said the preparation of samples and destruction of excess cannabis is all completed within 24 hours of the samples being received.

From there, Steep Hill uses a series of high-tech machines and procedures to test the prepared samples, including gas chromatography, high-performance liquid chromatography and inductively coupled plasma mass spectrometry, which uses high-energy plasma to ionize a sample to look for contamination. The test results reveal a long list of useful information about each sample, including moisture content (under state regs, dried flower cannabis is required to have a moisture content under 15 percent), THC level and the strain’s unique profile of terpenes, the fragrant essential oils that contribute to the flavor and — according to devotees — medicinal benefits of each variety. To help guard patient safety, Steep Hill’s testing can also reveal a variety of potentially harmful contaminants, including pesticides, microbes like E. coli, heavy metals like lead and mercury and — if the sample is a THC concentrate or edible — residual traces of the solvents used to separate THC from the dried cannabis.

Testing for heavy metals, Thornton said, is particularly important because cannabis is a bioaccumulator plant that can draw out contaminants in the environment. It does that so well that hemp has been used to help clean up industrial pollution. Thornton added that the risk of heavy metal contamination in Arkansas-grown cannabis is low because all the legal marijuana being cultivated in the state is grown indoors, under carefully controlled conditions. “They’re bringing in their own dirt. Their irrigation system is very controlled. They’re filtering all the water. All the inputs are very clean,” Thornton said. “In Arkansas, metals contamination is less of a risk than in a place like California where a lot of products are grown outdoors, where the soil is less controlled, the water is less controlled. That’s where you get metals contamination: water, soil, even the air.”

Pesticides, Thornton said, are another potentially harmful factor Steep Hill tests for carefully. Unlike some other states with recreational or medical cannabis laws on the books, Arkansas doesn’t have an official list of pesticides that are approved for use when growing cannabis. Given that, Steep Hill tests for a wide range of agricultural chemicals, including common and obscure pesticides. Again, Thornton said the very controlled growing conditions used by cannabis cultivators keep the risk of pesticide contamination low.

“California gets a lot of pesticide hits, and the reason is, maybe you’ve got a crop, and you’ve planted it somewhere that people have been growing grapes for 50 years,” he said. “They’ve been using Myclobutanil [a commonly used agricultural fungicide] on it or some other pesticide, and it’s just in the dirt. You can’t do anything about it. Or maybe your neighbor is growing cherries and is spraying, and you’re downwind. You get drift. Here, it’s more controlled, so it’s not as big a risk.”

Testing for pesticides is particularly important in cannabis products, Thornton said, because of the unique ways cannabis is often used. Myclobutanil, for example, is considered safe on fruits and vegetables, but converts to cyanide gas when burned. “With cannabis, we’re using it in dosage forms where we’re vaporizing and smoking,” he said. “There are just no studies out there that show what happens if you smoke pesticides. Some consumers and patients are immune-compromised, and it doesn’t take a lot to make them sick, whether it’s microbiological contamination or pesticide contamination … . If we aren’t testing for those things, we’re really no different than the black market.”

While Thornton said he often sees patients complaining online about the high price of dispensary cannabis (including tax, dried cannabis is about $60 per eighth-ounce at Arkansas dispensaries, compared to around $40 per eighth on the black market), he believes knowing that products have been independently tested and proven safe, potent and free of harmful contaminants is worth the extra expense. 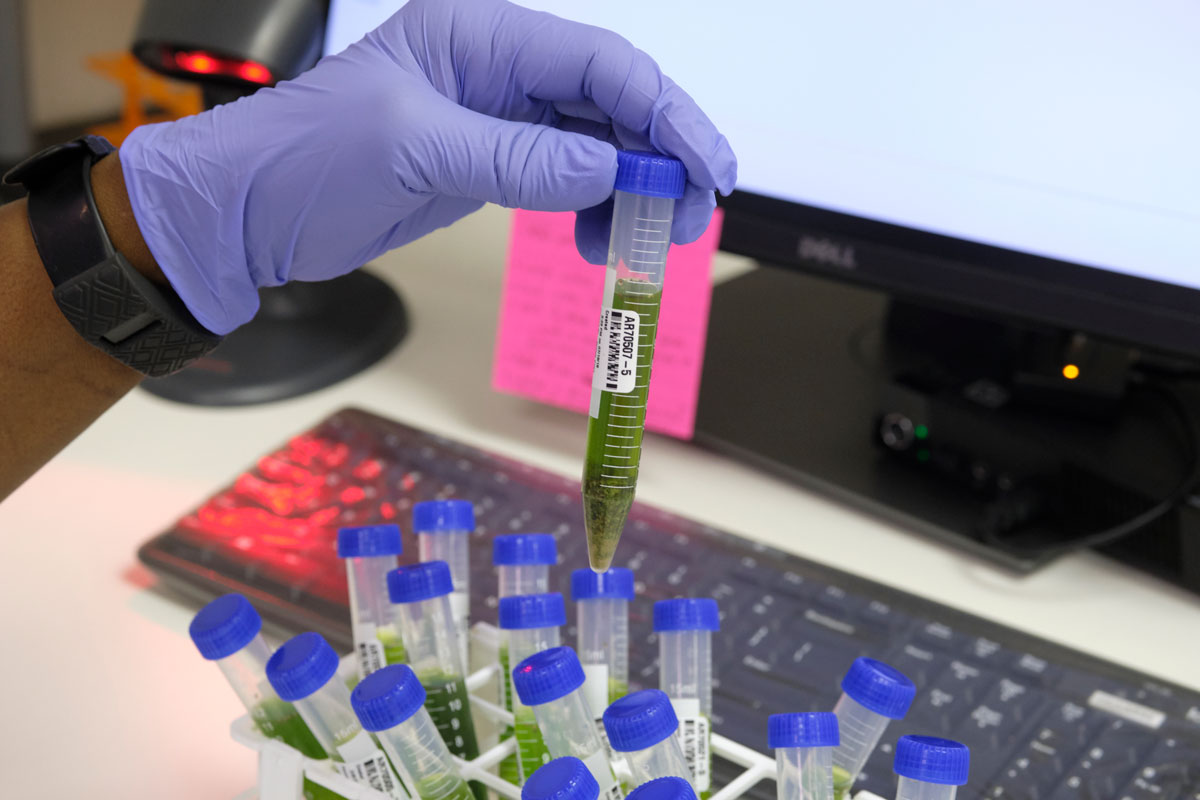 TESTING THC: Since all of Arkansas’s medical marijuana is grown indoors, it’s at less risk of absorbing pesticides, heavy metals and other contaminants than cannabis grown in states like California.

“I know patients don’t love the prices,” he said, “but for me, I’d rather pay a premium and know I’m going to get something that’s not dangerous. The other thing I think is crazy is people complaining about the THC percentages. These are actual, tested numbers. The guy that’s selling on the black market, he might have some sort of lab report telling you that this is 25 percent [THC content] flower, but there’s no checks and balances there. You don’t know. It’s not an independent lab.”

Thornton said he has considered approaching the Department of Health or local law enforcement agencies for samples of seized black market cannabis for testing, both to satisfy his own curiosity and to show patients what they could potentially be ingesting when they use cannabis from sources other than approved cultivators. “I would love to test black market weed, just to see what’s in it,” he said. “I suspect a lot of the stuff that’s available is coming from states where [legal marijuana samples] haven’t passed and wound up going out the back door. We don’t test any black market products, but I haven’t had any black market growers contact me and say, ‘Can you test this? I’m worried about my customers.’ ”

As the range of available cannabis products in Arkansas grows — cannabis-infused edibles, tinctures, oils, balms, lotions and even personal lubricants are popular in other marijuana-friendly states — the challenge for Steep Hill Arkansas grows exponentially. While it’s one thing to test samples of dried cannabis for moisture, pesticides and potency, it’s quite another with something like a THC cookie, which can contain everything from flour to chocolate chips to yeast, with the potential for potentially harmful contamination at every step of production. Vape cartridges in particular, Thornton said, are sometimes found to be contaminated because of a lack of quality control at the facilities that make the empty cartridges. Thornton believes Steep Hill’s network of laboratories and long track record in the industry will help it keep up with changing demands.

“One of the things that I appreciate about working with Steep Hill is that we’ve been around for 10 years, and we’ve got a lot of resources we can call on,” he said. “It is difficult when you start getting into a lot of complex matrixes like cookies, gummies and even a lot of topical products like transdermal patches. It gets more difficult, so just having some experience into what solvent to use to extract that, the process, how long you need to [ultrasonically vibrate] something, that process is something that over time, Steep Hill has figured out. We can kind of lean on them to help us know how to do it.”

While we had Thornton on the spot, we couldn’t help but ask about a debate that’s been raging since long before states started getting into the cannabis business: Cannabis indica vs. Cannabis sativa. Indica and sativa are crossbred to create the unique genetics behind the cannabis hybrids on the market. Devotees claim the level of sativa or indica genetics in each strain results in demonstrably different effects when ingested. It’s a belief popular enough that in addition to THC content and harvest date, the labels on most cannabis products sold in Arkansas reveal the percentage of indica vs. sativa. Though Thornton said laboratory test results like those performed at Steep Hill do reveal marked differences between the chemical profiles of indica and sativa, he feels it is an outdated way to consider cannabis.

“I think it’s a generalized way to look at things,” he said. “If you have a lab report, you can tell exactly what’s in it. That’s a better way to go about it.”