Thirty-three years: It’s got to be some kind of record. That is the number of years that readers of the Arkansas Times have weighed in — sometimes a few pounds heavier after a delicious meal — on the best places to dine, sup, chow down, grab a bite, nibble, whatever, in Arkansas.

A restaurant called The Hive is giving everyone an itch to get to Bentonville and experience the 21c Museum Hotel’s fine dining amid fascinatingly curious artwork. South on Main is getting rave reviews from the readership, proving that the Oxford American magazine’s notion to back good Southern eating as well as good Southern writing was a super idea. The chefs behind both, along with other products of the Capital Hotel kitchen, are profiled in one of our accompanying stories. Elsewhere, look for features on chicken and waffles in Central Arkansas, restaurants worth driving to Benton for (yes, you read that right), waitress extraordinaire Joann Sims, meat savant Rob Nelson of Bentonville’s Tusk and Trotter and the continuing evolution of Southern Gourmasian. Fair warning: You’re going to have a hard time reading on an empty stomach.

A guide to chicken and waffles in Central Arkansas
The best Little Rock has to offer.
by Will Stephenson

Czech mate: The Pantry Crest
Hillcrest to get a taste of Tomas Bohm’s cooking.
by Leslie Newell Peacock

Hog heaven at Tusk and Trotter
A carnivore’s paradise in Northwest Arkansas.
by David Ramsey

There IS good food in Saline County
Eat My Catfish, Baja Grill put Benton on the map.
by David Koon 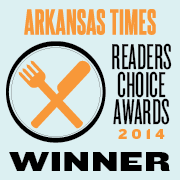 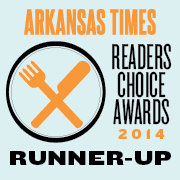