A few weeks ago, the University of Arkansas’s football program released its 2015 schedule. Also released: any enduring hope among Razorback fans that Little Rock and its no-longer-grand-enough War Memorial Stadium will remain a second home.

The process of ushering the doddering old man out the door has been ongoing for about 15 years now, ever since Fayetteville’s Reynolds Razorback Stadium expanded from 51,000 to 72,000 seats. This means Arkansas leaves nearly a million dollars on the table every time it plays a home game at the 55,000-seat War Memorial Stadium, Arkansas athletic director Jeff Long told the Associated Press last year. Driving up the cost of select War Memorial tickets to $100, as the UA recently did with a mandatory $35 donation to the Razorback Foundation for nonmembers, can only absorb so much of the difference.

Razorback home games at War Memorial are a 66-year-old tradition that reached a zenith in the 1970s when Arkansas often played more games in Little Rock (4) than Fayetteville (3). Most years, the Hogs played three games in Little Rock, but by 2003 Little Rock games had dropped to two a year. Then, last November, school and stadium officials announced their most recent contract had been revised to one game in Little Rock starting in 2014 and continuing through 2018.

The Oct. 18 game in Little Rock against No. 10 Georgia, which Arkansas lost 45-32, might have been the last time a marquee foe comes to town. One more SEC game is scheduled to be played in Little Rock before Arkansas’s contract with War Memorial Stadium runs out. That foe could very well be a cellar-dwelling Vanderbilt, or a sorry-again Ole Miss.

In the meantime, fans can look forward to the University of Toledo as the Hogs’ single War Memorial game in 2015, the first time since 1947 (when UA played North Texas) Arkansas hasn’t played a conference home game in Little Rock. This Mid-American Conference program, which plays against the likes of UMass and the University of New Hampshire, has lost all three games it has played against SEC competition. It is not a foe to get the blood pumping.

Some are optimistic that the Sept. 12, 2015, matchup will still be a sellout; the Georgia game fell a couple hundred tickets sold shy of a full house. “I would be surprised if it’s not,” said Nancy Monroe, board member of the War Memorial Stadium Commission and Little Rock resident. “They’re early in the season. The weather should be good.”

Others aren’t so optimistic, given the opponent isn’t in one of the major conferences. “As far as I’m concerned, the debate is over and the games are leaving Little Rock,” ArkansasFight.com‘s Doc Harper wrote. “We’re just running out the contract like when Prince released a couple of quick crap albums in the ’90s to get out of his Warner Bros. deal.”

Plenty of fans feel remorse that Little Rock’s once central place in the Razorbacks’ schedule has been knocked down so many rungs. After the new one-game-a-year schedule was settled, “we were very disappointed,” Monroe said. Little Rock games are a “great unifying thing for us, for the state of Arkansas. There are a lot of people from Little Rock and southward who just logistically aren’t gonna make it to Fayetteville.”

Still, it shouldn’t be forgotten the main motives behind this demotion — “brand building” and revenue generation — are the same reasons Little Rock was used as a second home in the first place. In the early 1930s, Arkansas leaders knew if their program was ever going to become nationally competitive it needed to have more support from its entire state, to stop losing the likes of Ken Kavanaugh (Little Rock High grad) to LSU and Don Hutson (Pine Bluff High) and Paul Bryant (Fordyce High) to Alabama. So Arkansas leaders, like those at universities in Alabama and Mississippi, decided to take their team away from its rural campus and parade it in a bigger, in-state city in front of more media and fans.

Oregon did the same by traveling from Eugene to Portland. Washington State traveled from Pullman to Spokane, while Ole Miss traveled to Jackson and Auburn traveled to Birmingham. Each of the programs pulled out of these metro areas at different times; one overriding reason was the same as in Arkansas’s case — the campus’ stadium simply outgrew the metro area’s stadium.

This especially came to the fore in the late 1980s as Auburn jockeyed to stop playing Iron Bowl games at 75,000-seat Legion Field in Birmingham, to take advantage of the 10,000 extra seats in Auburn’s expanded Jordan-Hare Stadium. Quoting former Auburn athletic director David Housel, the New York Times reported that, “It got to the point that even Auburn fans living in Birmingham were so ready to drive the 120 miles to campus, they would ‘refuse to buy tickets to the Auburn-Alabama game if it was in Birmingham.’ “

Every team, as you see in this chart, has dropped its dual home arrangement in the last 50 years. Programs like Oregon, Virginia Tech, Alabama and Auburn have gone on to contend for or win national championships since they stopped. Yes, War Memorialists, it’s true: Arkansas has become unique in the sense that it appears to be the only program still hanging on to this practice.

But is that something to be proud of? 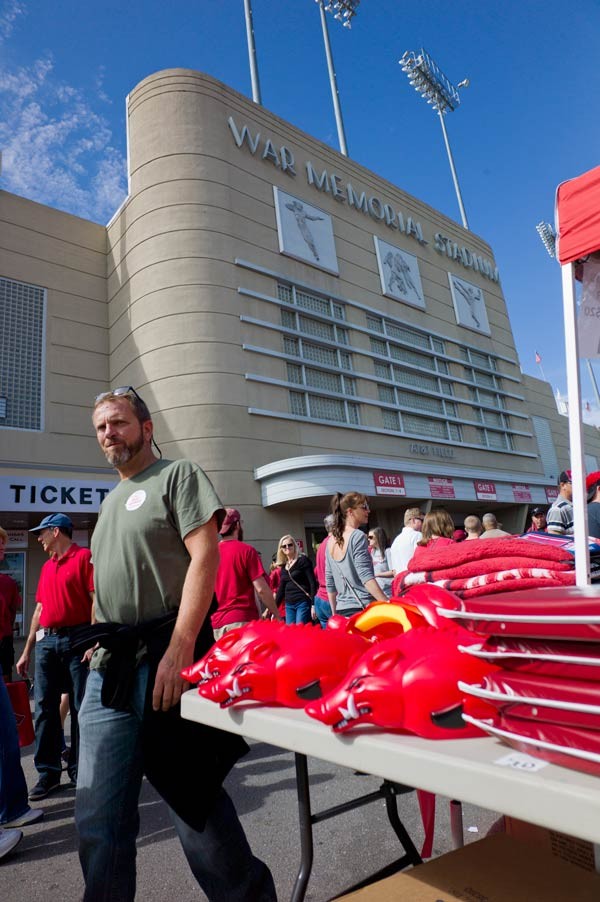 It’s better to be proud of winning at a high level, a la Oregon, Auburn and Alabama. Hanging on to War Memorial hasn’t recently helped Arkansas get to this level. Its function was served in helping lift Arkansas to the nationally elite level it enjoyed through much of the 1960s through 1980s. But it will not serve in getting Arkansas to the level Jeff Long, Bret Bielema et al. expect it to reach in the later 2010s and 2020s.

In the 1930s and ’40s, the smartest rural programs traveled 30, 50, 100 or 150 miles to the in-state stadiums that would give their teams the most bang for their buck in terms of exposure and revenue. In today’s world, where cable television and the Internet make distance far less of an obstacle for fans to follow their teams, the smartest programs realize that “neutral site” games in Texas metro sites often provide the best return.

Do you think any Notre Dame fans complained in 2009 when their Fighting Irish decided to play Washington State not in Indianapolis, but in San Antonio? No, because a) Notre Dame is a national brand and caters to a national audience and b) no program can thrive in today’s competitive recruiting market without spreading its nets as wide as a Texas sunset. If Arkansas wants to be a national powerhouse, wants to sign the best players nationwide and wants nationwide respect, it has to better and more consistently take advantage of its proximity to Texas. That’s why Arkansas has started an annual series with Texas A&M in Arlington at the Dallas Cowboys’ massive AT&T Stadium. That series, which would encounter scheduling complications if Arkansas were to keep two games in Little Rock, is also a major factor why Jeff Long decided it was best to drop War Memorial games to one a year and gain flexibility.

Arkansas is special in that it still clings to a 20th century business practice long ago abandoned by competitors. That fact in and of itself is nothing to waste a Hog Call on.

The University of Arkansas pays War Memorial Stadium $75,000 of rent per game it plays there, but those payments will stop after 2016. It must develop other revenue streams. It still hosts small college and high school football games and its renovated press box and luxury suites helped it attract about 200 events in the last year, including weddings, wedding receptions, business meetings, class reunions, hospital fundraisers and birthday parties, stadium manager Charlie Staggs said.

While plenty of small events help pay the bills, the stadium’s blockbuster events appear to be dwindling. Last year, it was a candidate for a new bowl game but the bowl’s organizers opted instead for Montgomery, Ala., where next month it will debut in a 25,000-person stadium as the Camellia Bowl. In past decades, headliners like The Rolling Stones and Elton John performed at War Memorial but such marquee acts are waning, too. Staggs said he was optimistic a big concert was coming in May 2015 after an event company had told him to reserve a date for a not-yet-announced act, but recently “they called up and told us we’d been removed.” No reason was provided.

Should soccer be a bigger part of War Memorial’s future?

American and Mexican national teams, as well as internationally renowned clubs like Real Madrid and FC Barcelona, have proven to be hits at the University of Michigan, Birmingham’s Legion Field and AT&T Stadium in Arlington. Given Arkansas’s growing Hispanic population and the state’s growing number of soccer fans, bringing in a similar caliber of soccer stars might sell out War Memorial. 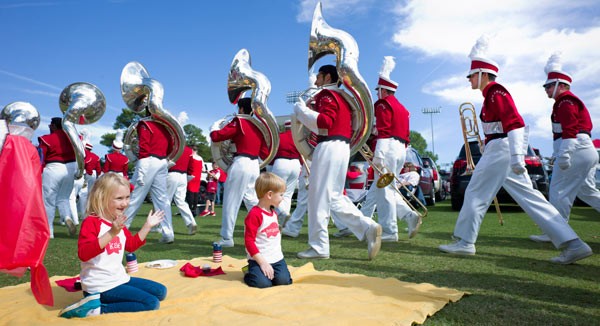 Its staff has already begun preliminary discussions with some professional soccer clubs, but nothing has advanced beyond that, assistant stadium manager Jerry Cohen said. But to host major soccer matches, War Memorial needs to be permanently modified. Currently its field’s four corners, near the goal lines, are appropriate for football but aren’t wide enough for soccer. “We would have to take out a couple rows of seats to make a regulation soccer stadium in there,” Staggs said. Such a change made to the seats on the east and west sides would cost at least $500,000, he added. “Later on, I think this is a question the commission might want to look at so that we could get some high-profile soccer events in here since soccer is getting so popular now.”

This article originally appeared in modified form on the author’s site, thesportsseer.com.