If you’re a patient at the medical center at the University of Arkansas for Medical Sciences, you might not feel the pain that a budget deficit of $39 million represents for the institution as a whole. That deficit is but a drop in the $1.5 billion bucket that is UAMS’ total budget.

But the deficit — which was budgeted last year and approved by the UA System Board of Trustees — has, at this point in the fiscal year, risen to $72.3 million. Clinical revenues, while higher this year than last, are not meeting what UAMS leadership describes as an ambitious budget, and joint initiatives with other health systems have required unexpected spending. On top of that, the UA System has told UAMS that it wants its 2019 budget to be balanced.

UAMS has run a deficit for three of the past four years, in 2014, 2015 and 2017. Revenues have tracked upward since 2010, but so have expenses. During his tenure, former Chancellor Dan Rahn, who left this year, begged the UA board to lobby for more state dollars for the institution, which supports five colleges and a graduate school. While the situation is not as bad as it was in 2014, when UAMS had to borrow money to operate, it seems to have again reached a tipping point — especially given that there are only six months left in the fiscal year to make up the $32.5 million gap, keep the deficit at $39 million and come up with a deficit-free budget for FY 2019. UAMS’ unrestricted net assets, which it might tap into for emergencies, only amount to $52.4 million.

UAMS can’t cut its way to a balanced budget and be the sort of medical center the state can be proud of, UAMS Interim Chancellor Dr. Stephanie Gardner and Senior Vice Chancellor for Finance and Administration Bill Bowes have emphasized. It must raise its revenues. But something’s got to give on the expenditure side, and “everything’s on the table,” Gardner said in an interview last week. The current operating model “is not sustainable,” she said.

That means vacant positions are being evaluated for elimination, benefits like vacation days for employees could be reduced and some employees may lose their jobs.

In the wake of a similar budget shortfall at the University of Mississippi Medical Center earlier this year, that hospital eliminated 195 jobs and 85 unfilled positions. When the cuts were announced, UMMC’s chancellor told the media, “When you look at academic medical centers like us all across the country … they are all facing these challenges, these battles.” Gardner and Bowes said the same thing.

“We need to try to make sure there’s a correction on this $32 million,” UAMS’ unbudgeted shortfall, Gardner said. “We can’t continue like this.”

In fact, in his address to the UA board in 2017, former Chancellor Rahn warned of a “death spiral” should the state not increase its appropriation for UAMS.

In an email to all employees before a Nov. 28 “Town Hall” with staff about UAMS’ financial difficulties, Gardner stressed that UAMS’ annual revenues have “consistently exceeded our expenses,” but have “not been enough to meet our infrastructure investment needs.

“With our limited state funding, our dependence on clinical revenue to fund our education and research missions, the rising cost of doing business, proposed cuts in Medicare reimbursement and changes to Arkansas Works and the Affordable Care Act expected next year, we are faced with even greater pressures now.”

What the state gives now

Arkansas’s contribution to its medical teaching hospital, the institution that turns out a huge number of Arkansas’s physicians, is $106.6 million a year. It once allocated $120 million, but the legislature cut the appropriation back after the passage of the Affordable Care Act in anticipation that the health care law would reduce UAMS’ cost of treating Arkansas’s indigent population. (The ACA, aka Obamacare, did reduce UAMS Medical Center’s unreimbursed costs, from 13 percent of its budget to 3.5 percent.) The $106.6 million number sounds like a generous sum until you consider that UAMS must use a great percentage as its match for Medicaid reimbursements. In 2017, the match was $85 million, leaving only $21 million in state support for the rest of UAMS’ mission, including education, research technology development, and clinical services.

Propping up UAMS is the hospital, which provides 77 percent of revenues for all of UAMS.

The $39 million deficit stems from several things: UAMS carries depreciation on its own books, as do all campuses in the UA System. Thanks to a growth spurt in the late 2000s — which included the $130 million Winthrop Rockefeller Cancer Institute (2010), the new $197 million hospital tower (2009) and the Psychiatric Research Institute (2008), as well as the cost of high-dollar medical equipment —UAMS’ depreciation stands at $85 million, an amount that represents what it needs to invest in campus facilities and equipment.

You could argue, Vice Chancellor Bowes said, that because depreciation is not a real cash expense, UAMS’ budgeted deficit could have been less than $39 million. But, he said, “we have to look at it that way [because] we are responsible for the debt we incur on our projects.” It is an expense that is measured collectively against revenues, thus pushing the deficit up.

UAMS will spend $4.5 million this year in debt service on bonds of $45 million to renovate rooms in 1955 hospital — which is rife with problems in plumbing and structure — for patient use again. UAMS has two other buildings that are nearly 60 years old — the Winston K. Shorey Education Building (1957) and the Barton Research Center (1960).

Another cash expense in the deficit is $20 million that is going to raises at UAMS. Staff (not including faculty) have seen their salaries rise only 1 to 2 percent over the past four years, Gardner said. Because of lagging pay, UAMS annually has had an 18 percent turnover in nurses, she said; UAMS is working to get their pay up to market levels. UAMS also has employees whose pay is only in the 25th percentile nationwide among their peers, Gardner said.

The hospital also had a 2 percent increase in its costs for health insurance coverage for employees. “We absorbed that instead of putting it on employees,” Gardner said.

The additional $32 million deficit is due to a shortfall of $15 million in anticipated clinical revenues and unexpected expenses related to the creation of the Accountable Care Organization with Baptist Health to take care of Medicare patients and a second initiative to serve Medicaid patients with behavioral health and developmental disability needs with Baptist, Arkansas Children’s Hospital, Arkansas Blue Cross and Blue Shield and Bost Inc. clinics in Northwest Arkansas. The latter arrangement is meant to address the possibility of declining Medicaid dollars if the state hires a managed care company to run its Medicaid program. 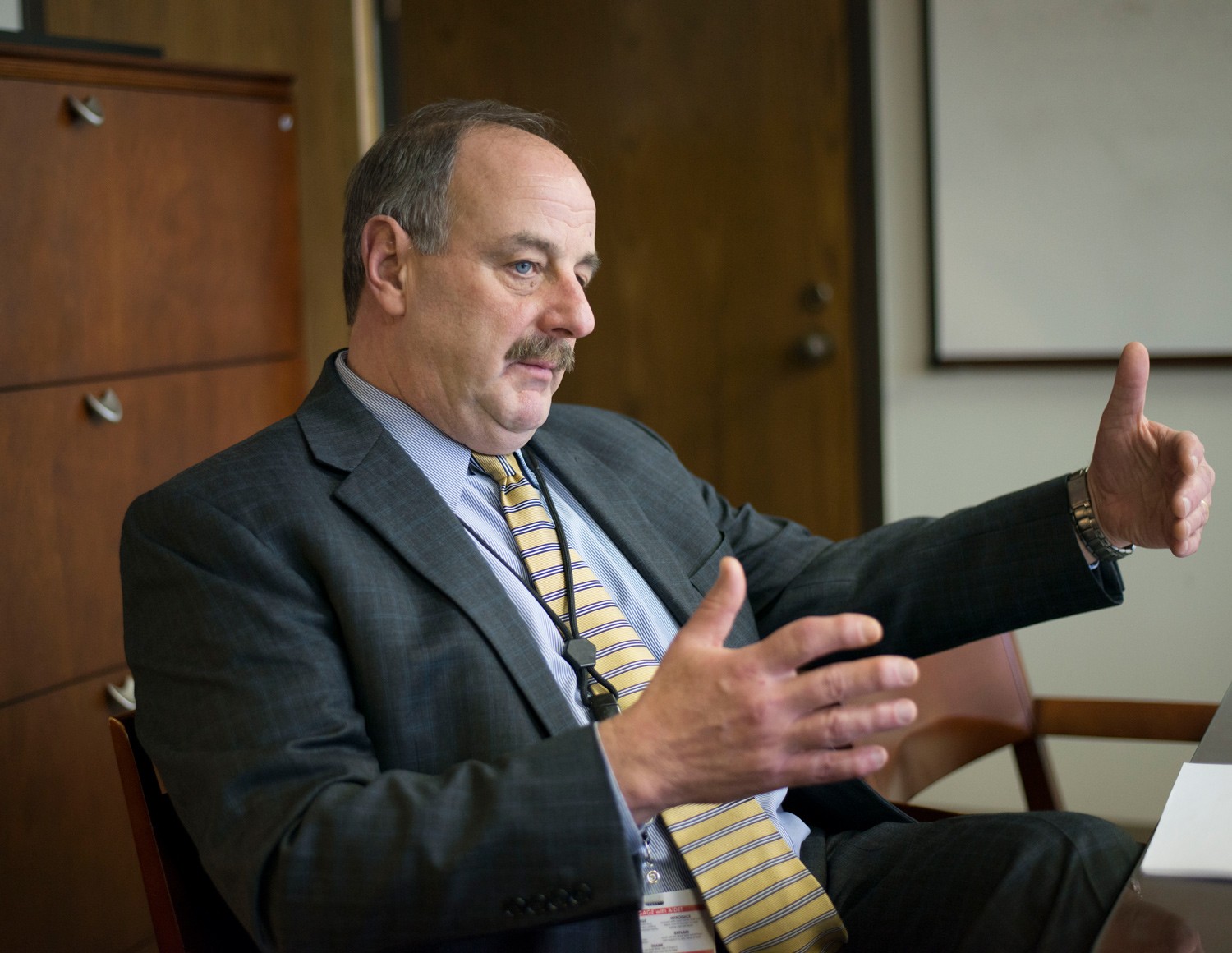 Other negatives could impact UAMS down the road: Governor Hutchinson has asked the federal government to approve a waiver that would allow only those who make less than 100 percent of the federal poverty level to enroll in Medicaid; the Department of Human Services has said around 61,000 Arkansans would be removed from the program. UAMS can’t predict what that would mean for its bottom line, since where those 61,000 would seek treatment can’t be known, but it would surely increase the hospital’s unreimbursed costs. Should Congress pass a tax bill with the provision that removes the penalty for not sharing in the country’s insurance costs, the Affordable Care Act will be weakened further. And if the Congressional Budget Office is correct and the bill will actually raise taxes on people making less than $75,000 a year, more people may be unable to afford insurance and increase UAMS’ indigent care.

Interim Chancellor Gardner — who is one of two new finalists for the chancellor position after the original two finalists for the job dropped out — says she and other UAMS administrators will seek out legislators one-on-one to make their case that Arkansas’s only medical teaching and research institution, its only Level One Trauma Center, needs to take a higher priority in state funding.

UAMS is working to operate as efficiently as it can. “We’re trying to look at every aspect of our services and programs we provide, what’s critical and what’s sustainable,” Gardner said. “But we want to be true to our mission, to improve health care in the state.”

Gardner says UAMS will reduce expenses by limiting the hiring of new employees and suspending all “reclassifications” — promotions — and “out-of-cycle salary increases.” Though UAMS has taken steps to address Medicare and Medicaid reimbursement challenges, to balance the budget for the 2019 fiscal year, “much more action is needed.”

Can UAMS catch up without layoffs? “We’re looking at everything,” Bowes repeated. UAMS can’t delete clinical service lines without harming the medical college’s ability to train doctors, so even if some programs cost money rather than generate it, they can’t be eliminated without harming the teaching mission. But Bowes said leaving vacancies unfilled and doing away with certain contracted services will improve the bottom line.

UAMS leadership also believes the institution can raise revenues by further improvements in administrative functions, like billing, access to appointments to see more patients and cuts to hospital stays. It has contracted with Huron Consulting of Chicago to look at such changes. These strategies aren’t new; much the same thing was done in 2015.

Some might argue that shorter hospital stays and more patients could be a negative if it means patients are released too soon from inpatient care or must spend less time with their doctors at appointments because of pressures on clinics to increase patient load. Layoffs could also hurt operations.

Gardner has said that a solution “will certainly come about from a lot of creative minds providing ideas and being willing to help find solutions.” Some of those creative minds could be UAMS employees; a mailbox has been set up so they can give input. While the institution declined to release their emails, it did give a list of employee suggestions: Disallow space heaters. Increase parking fees. Cut catering for meetings. Increase efficiency in collecting patient information. Eliminate the birthday holiday. Decrease length of hospital stays; see more patients. Create frequent flyer accounts to save on travel purchases. Turn off the lights when a room is not in use. Close nonclinical or hospital care during the Christmas holidays. Quit buying coffee.

No suggestions provided to the Times suggested administrators should look to their own house to save money. But, UAMS’ decision-making in its of its administrators has gotten less than favorable attention at times. In 2013, its decision to pay a former CFO, Melony Goodhand, $312,000 simply to be on call for questions after she left the university raised some eyebrows, especially after she quit the job for which she left UAMS and after it was learned that Bowes, her successor, was hired at $270,000. More recently, an anonymous writer to the Times has grouched about the university’s contract with College of Medicine Dean Pope Moseley that allows him to spend months in Denmark doing research at the University of Copenhagen while earning $600,000 a year at UAMS. Asked if faculty or administrators might be asked to renegotiate contracts in a way that would save UAMS money, spokeswoman Leslie Taylor replied, “Everything is on the table.”