El Dorado, something of a sleepy, one-trough town before the discovery of oil there in 1921, is living proof of what a large influx of cash can do for a place. El Dorado’s downtown is thick with monumental 1920s architecture that might seem out of place, given that El Dorado seems situated so far from pretty much anywhere.

Though that downtown faded quite a bit between the city’s boomtown high and the end of the 20th century, El Dorado is currently enjoying a second infusion of serious cash, with tens of millions of dollars being poured into the new Murphy Arts District. An entertainment extravaganza built around a large, 7,500-seat outdoor , the MAD launched last September with a star-studded concert featuring music superstars like Brad Paisley, Smokey Robinson, Train and Migos.

In addition to the , landing A-list talent and reviving the city’s grand movie palace, The Rialto, the influx of capital is putting a high-gloss buff on a lot of buildings in the town core. That includes The Griffin Restaurant at 101 E. Locust St., a chic, 200-seat dining and entertainment venue and a finalist for the Best New category in this year’s Readers Choice Awards.

Housed in a very spiffed-up former car dealership and service center located directly behind the Rialto Theater, The Griffin is named for the former occupant of the space: Griffin Auto Co. These days, the vast, high-ceilinged room where mechanics once worked on the boss’ Packard and the roughneck’s Ford has been gutted and elevated to the kind of gleaming showplace you might expect to see on the bright side of Dallas or Nashville, with a central bar, uniformed waitstaff and floor-to-ceiling windows that look out on the rising MAD. A stage with state-of-the-art lighting and sound juts into the large dining room, and features live music every Thursday night. Take out the tables and chairs, and you’d have a venue or exhibit space that could easily hold several hundred. Through a brass door at the rear of the restaurant, past another wall of windows that looks into the kitchen, is an even bigger venue: the Griffin Music Hall, which can seat 2,000.

A farm-to-table operation, The Griffin’s long menu is created entirely from ingredients sourced within 150 miles of El Dorado (except for the seafood). That careful selection of ingredients shows in its menu of lunch, brunch and dinner items. On a recent visit for lunch, we sampled extensively, starting with a crab cake and fried green tomato platter ($13), which featured two thick cakes, dense with crab meat, each perched on a single slice of fried green tomato. Well-spiced and hearty, paired with a side of house-made remoulade sauce, the platter was a great pairing with a basket of lagniappe hush puppies that came with sweet butter. For entrees, I tried the grilled meatloaf on garlic-mashed potatoes ($12), while my companion chose the Portobello and mozzarella panini with sweet potato fries.

The meatloaf turned out to be a lot more complicated than anything your mom used to make for Sunday dinner, featuring a mixture of andouille sausage, ground chuck and tasso ham, covered in rich brown gravy. The dense, almost steak-like texture was a surprise, but a good one, as was the lovely . The creamy mashed ‘taters and grilled mixed vegetables were a perfect accompaniment. The panini was also excellent, as were the fries. 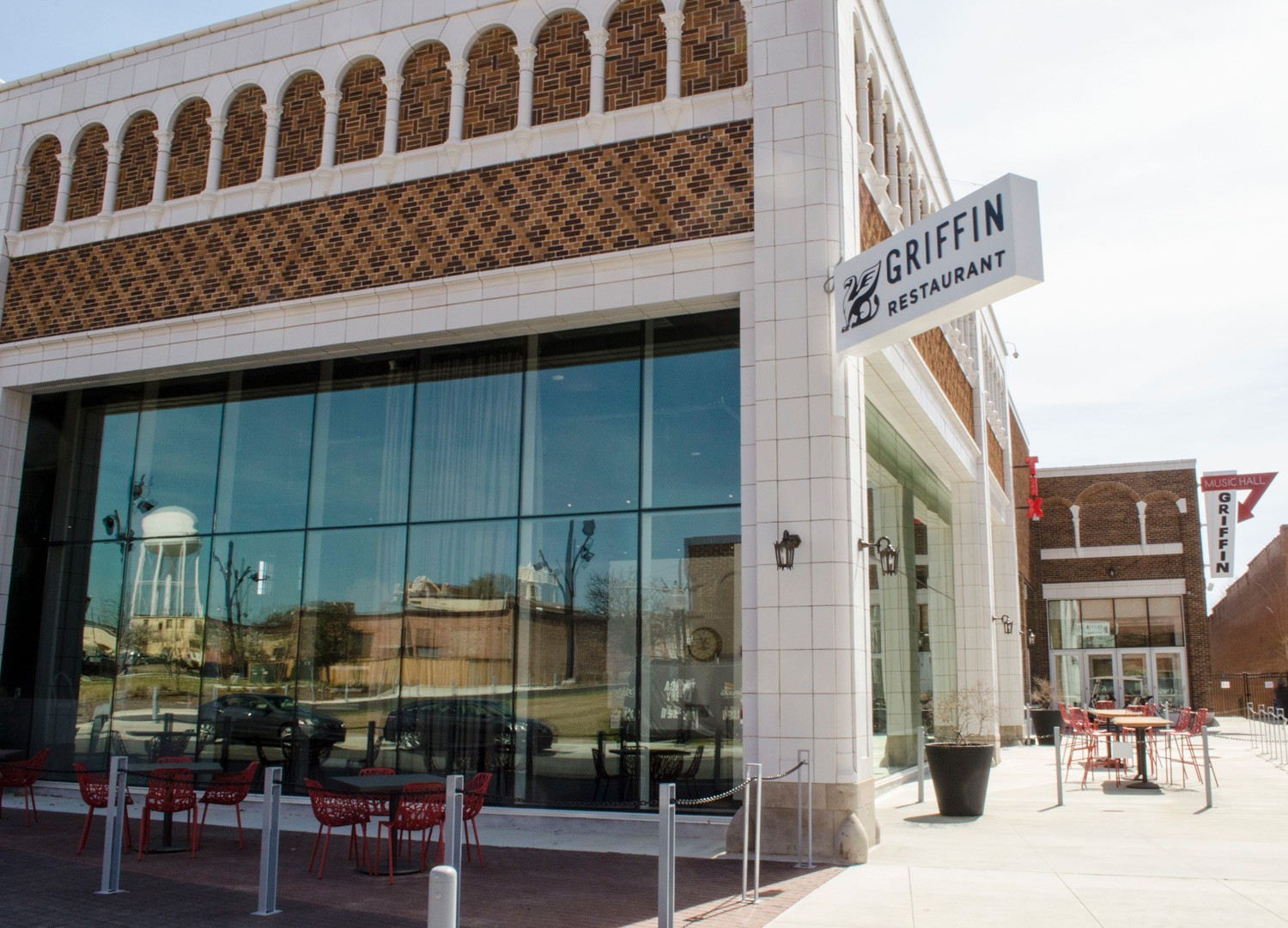 We’ve been coming to El Dorado for family visits for years, so we are well versed in the joys of the local Spudnut, the pillowy potato-flour doughnuts that have been a local delicacy for decades and which are this writer’s doughnut in the whole wide world. Given that, we had to try The Griffin’s “Lost Spudnut” dessert, with day-olds from the Spudnut shop spruced up with ice cream, whipped cream and a chocolate sauce. After a great meal, the Lost Spudnut turned out to be the best thing we had. We’ll leave it at: If sin had a taste, it would probably taste something like that.

We’ve been saying for years that if you want to find the real Arkansas, you’ve got to stray far from the interstate. El Dorado is definitely living up to that idea with its investment in the arts. While The Griffin may not lure in the truckers and roughnecks, it’s shaping up to be the rival of any restaurant in the state. Now that El Do is getting its second bite at the boomtown apple, The Griffin is definitely worth a try if you’re in that neck of the woods.