Standing at the midpoint of the 11,602-foot-long runway at the former Eaker Air Force Base in Blytheville, you hear the machines long before you see them. At the starting line, a dim burble rises to a howl that soon grows to a roar. Once their drivers row through the gears, the big-engine cars come at you with a sound like a bow drawn across the lowest string of an upright bass: ominous, deep, rising to a T-Rex bellow, until you imagine the sound will make your sternum vibrate like the head of a drum. The motorcycles and sports cars, meanwhile, approach with a whine that will remind any Star Wars fan of the speeder bikes zigzagging through the trees on the Ewok homeworld, the angry, electrified buzz of an enormous, cyborg wasp.

Looking up the track on a balmy day in late September, the soybeans ready for harvest in the median of the vast runway complex where the Pentagon’s Strategic Air Command once launched B-52G Stratofortress bombers to targets around the globe, the competitors in the East Coast Timing Association‘s Arkansas 1-Mile Challenge emerge out of the haze every few minutes, on you in a heartbeat from the time you first see them, the fastest covering a mile every 15 seconds, passing you in a blur, faster than anything you’ve ever seen that wasn’t shot from a cannon, the sound and fury evaporating back into the lingering summer haze at the far end of the runway.

There hasn’t been a lot going on in Blytheville since Uncle Sam pulled up stakes there in December 1992, carving a crucial chunk out of the local economy and leaving a vast, 2,600-acre air base — complete with hangars, maintenance facilities and enough housing to put a good percentage of the French Foreign Legion up for the night — to sit largely vacant. Planes still land there, and there’s a dismantler of large commercial jets on site, turning past-their-prime flying buses into scrap metal. Other than that, the place gives the air of being largely abandoned. That changed earlier this year, though, when the ECTA came to town for the first of three land-speed events held in April, June and September.

The ECTA started on the 6,500-foot, World War II-era runway at Maxton Army Air Base near Laurinburg, N.C., an East Coast alternative to distant land-speed holy ground like the Bonneville Salt Flats in northwestern Utah and El Mirage Dry Lake in California’s Mojave Desert. This year, it brought its roadshow to Blytheville, with the fastest vehicles in the inaugural trio of events turning in time-slips over 240 mph. The ECTA is planning on making the series annual events. Join the ECTA, pay a fee of between $385 and $485 (depending on which meet you want to attend), pass a vehicle safety inspection by the very strict on-site techs, and log a series of qualifying runs to prove you can follow instructions enough to not die, and you too can spend a weekend genuflecting to the speed gods, whether you’re in a homebuilt hot rod or a brand-new Dodge Challenger Hellcat (there was at least one of those at the September ECTA meet, turning in 170-mph-plus passes like a drive to the corner store, then motoring home with the AC and cruise control on). Those who want to spectate and gawk at the machines on display, meanwhile, need only bring a cooler, lawn chairs and $10. (For full details, including rules for drivers, hit the ECTA website at ectamile.com.)

One of those in Blytheville for the Sept. 28-30 event was Columbus, Ohio, resident Michelle Pettit, who was there with her father, Jon. Michelle, whose 25th birthday fell on the second day of the three-day event, was hoping to celebrate by going over 150 mph in the family racer: a Fiberglas replica of a vintage Bugatti speedster, surrounded by a high-strength steel roll cage that made it look like a rolling jungle gym. Powered by a twin turbocharged General Motors crate engine, the car was designed to top 200 mph, but mechanical problems and issues with the safety harness kept Michelle from behind the wheel for much of Saturday. She would eventually turn in a top speed of 140 mph in one qualifying run and a full-mile best of 128.8 mph before mechanical issues forced the Bugatti to withdraw.

Jon, an aircraft engineer, who built the Bugatti, builds a different custom car every winter with the help of Michelle and her siblings, and Michelle said she grew up wrenching on cars at his side. “We build custom cars for fun,” she said, “so I’ve been driving our custom cars. This is my first time on a straight track. I did a road race course before with our Blazer that has a Corvette engine, so really it’s just through him.” Later in the weekend, after the Bugatti was sidelined, Pettit would put her stock Toyota RAV4 down the runway at over 100 mph. 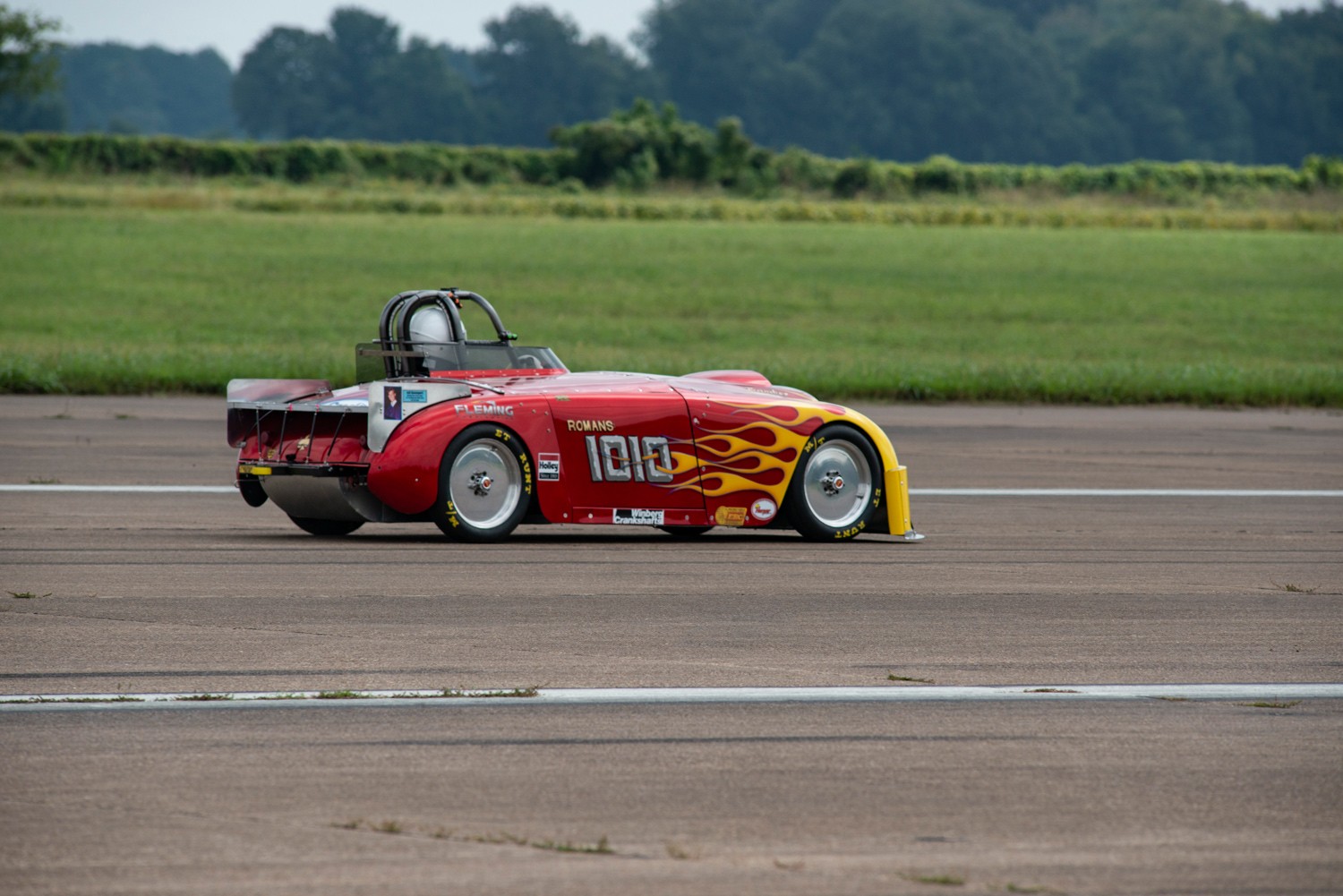 Across the taxi-way that served as pit row was another car you might not expect to see at a land-speed event: a 1992 Geo Metro, fielded by Cedar Rapids, Iowa, residents Jim Sievers and Tom Bruch. Now in his 70s, Bruch is a legendary builder of high-performance Porsche and Volkswagen racing engines. He set his first record at Bonneville in 1967 behind the wheel of a Porsche 356 Carrera Speedster. Since then, his airflow-focused style of engine tuning has become so well known in Porsche circles that motors built using his techniques are called “Bruchrasa” engines.

It might seem a long jump for Bruch from high-performance Porsche racing to the Geo Metro — an economy car known more for its 48 mpg fuel mileage than the 52 horsepower under the hood when stock. But he became interested in hopping up Metros when he bought one in the early 1990s to commute back and forth to his Porsche repair shop in Iowa City. The hot rod bug bit, and he’s been chasing speed in Metros for over 20 years.

Though fully street legal and wearing current Iowa plates — even the horn works — the car Bruch and Sievers brought to Blytheville is a beast, ingeniously hot-rodded on the relative cheap in every way imaginable, from the smoothie aluminum wheels (originally Ford space-saver spares), to the massive Porsche 911 three-barrel racing carburetor perched on a custom intake. Bolted atop the tiny one-liter, three-cylinder engine, the carb looks almost as big as the motor itself. 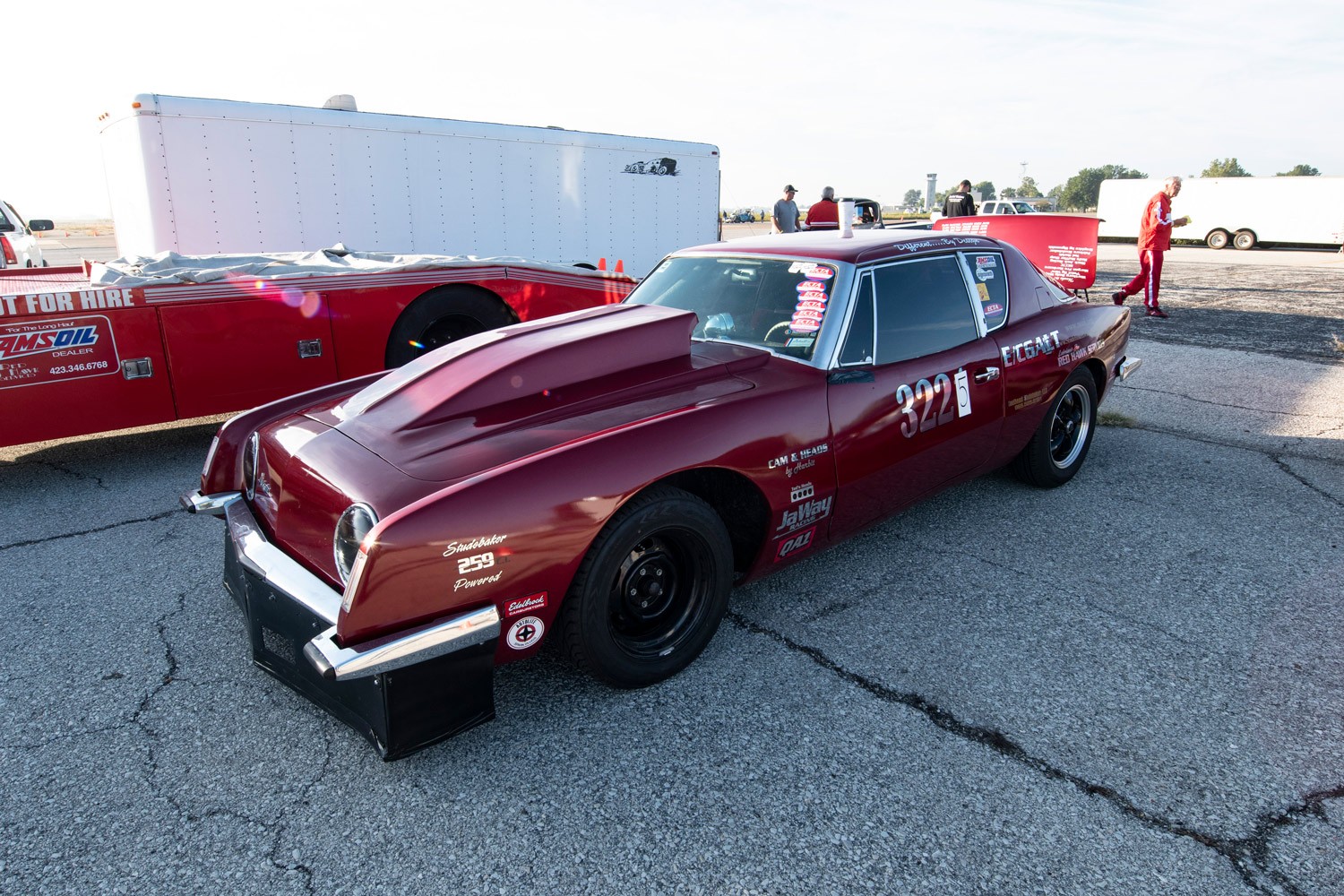 “The mechanicals on a Metro are made by Suzuki,” Bruch said. “The Chevy parts aren’t so good. They rust out. But the Suzuki parts are excellent. That’s basically a bike motor with an automotive [transmission] bell housing on it. It responds to things like a motorcycle motor, too.”

When racing, Bruch said, the Metro shifts at 8,000 rpm, the little motor screaming bloody murder through an unmuffled exhaust pipe. Sievers and Bruch sourced parts for the car from as far away as New Zealand and Europe. In a modern throwback that would make the tight-budgeted teenagers who pioneered the golden age of hot-rodding proud, the pair scrounged lightweight carbon fiber panels by digging through dumpsters behind a company that builds components for the military, replacing numerous steel parts and pieces to bring the car’s weight down to a feather-light 1,300 pounds.

“It’s a lot of fun, and I like the challenge,” Bruch said. “This is a hot rod. We built this ourselves. We just try this and that. Just keep changing.” Later in the day, their work would pay off with a personal-best pass of over 120 mph.

In addition to high-horsepower drag cars and even former NASCAR contenders in Blytheville, niche racers like Sievers and Bruch were common at the September meet, chasing lesser-known class records based on weight or engine displacement with a mix of mechanical ingenuity and flesh-and-blood determination. One of those seeking a record was Eric Roehrle, who had driven over 600 miles to campaign his 250cc Kawasaki Ninja. Like the Geo Metro, the 250 Ninja was built more for economy than speed, sold as a low-horsepower “starter bike” for newbies who could learn on it before moving up to something more powerful. Over the past 10 years, Roehrle has slowly built his 250 Ninja into the fastest of its breed on the planet.

While it would be easy to go much, much faster on a bigger sport bike (there were turbocharged bikes running north of 210 mph at Blytheville all weekend), Roehrle said he enjoys the mechanical and engineering challenge. “I’m one of those type A personalities, I guess,” he said. “If I had one of them [higher horsepower] bikes I’d be trying to go 300 miles per hour. That costs a lot of money, and there’s not too many places you can do that. It’s just the challenge of making the small bike go fast. … People think it’s exciting and stuff, but once you’ve done it and gone fast, that’s done. Then all you’re doing is riding down the track staring at the tach thinking, ‘This isn’t any faster.’ ”

The idea of a mechanical challenge is familiar to Michael Abraham. An Indiana fabricator and custom painter who has worked with racing legends like Mario Andretti and John Force, Abraham was there to help crew for his friend J.B. Bracken of New Mexico, who was racing both Indian and Harley-Davidson motorcycles. The pair met at Bonneville in 2009 and soon became fast friends. 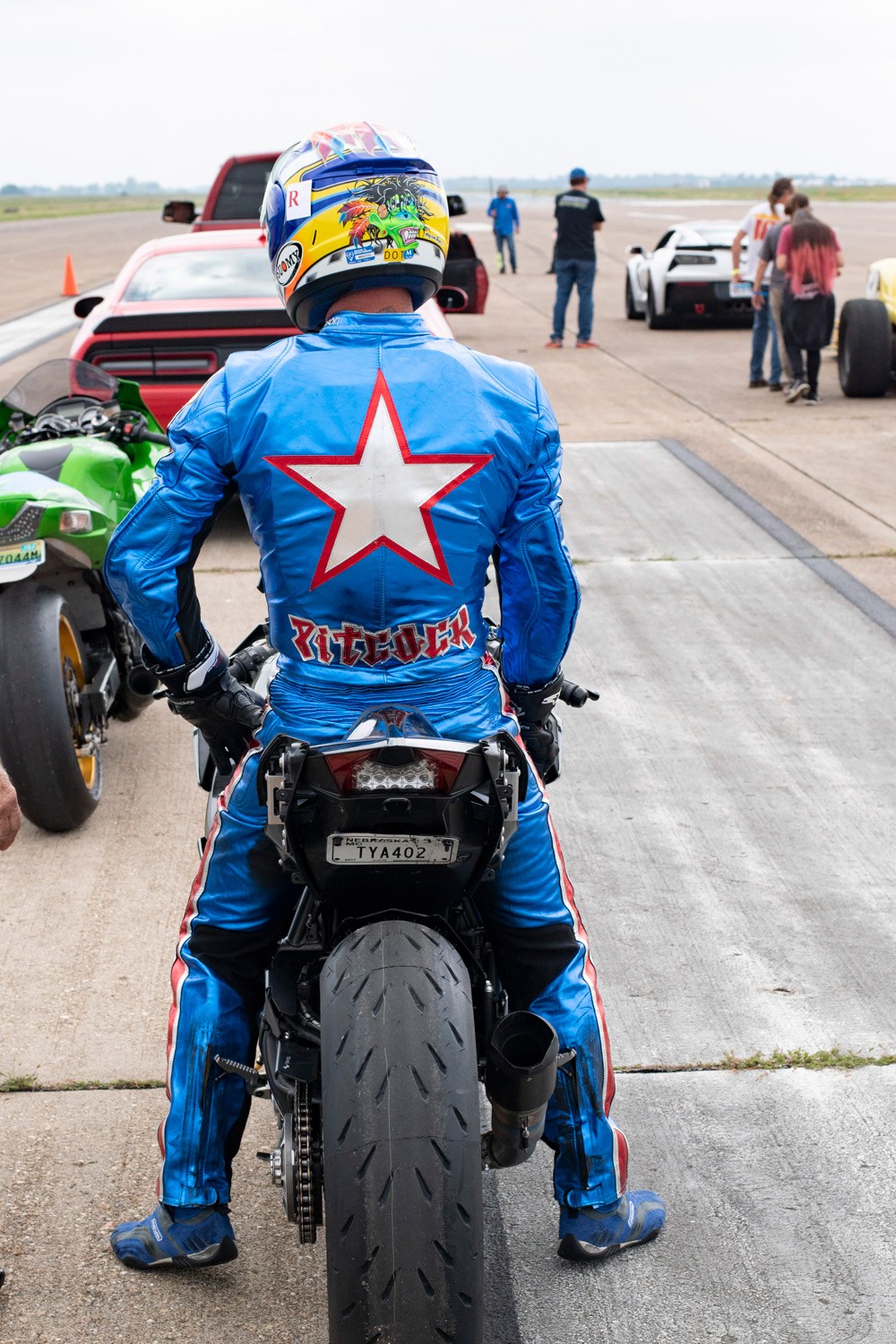 “The first challenge is to build something that’s going to go fast and push the envelope,” Abraham said. “Either the envelope on the rules or the envelope on the engineering or whatever. As an engineer, you’re going to try and build something with an advantage at every step. Is it going to be lower profile? Is it going to have more horsepower? With land speed racing, the beauty there is they have engine classes and then they have chassis classes. If you’re in a car, technically you could run every class of engine in that same car and have all those different records. So there’s flexibility there. … You’re kind of applauded for thinking of a different mounting or something like that to tuck in a component out of the airflow. There’s that challenge.”

The second challenge of land speed racing, Abraham said, is race day, when the goal is to try to keep your vehicle together long enough to be rewarded by going faster than anyone in your class. It’s all part of a long and sometimes frustrating process. “If you go too much in one area, it puts too much stress on another mechanical area, then it breaks that,” he said. “So then you’ve got to beef that up. It’s all about these dominos. You’re trying to get all the dominos to stand up at the same time so you can be successful.”

While chasing land-speed records, Abraham said he’s met great people and made friendships for life. The folks at Blytheville for the Arkansas 1-Mile Challenge, he said, are all driving different kinds of vehicles, chasing different records and from all over the country. But inside, he said, they’re the same: addicted to the quest to go faster than anyone before. Standing in the shade of a tent beside a gleaming, low-slung bike with lettering that staked its claim as the fastest production Indian motorcycle in the world, Abraham said trying to relate the “why” of that to someone who doesn’t get it is pretty much impossible.

“It’s hard to explain,” Abraham said, “other than the fact that when it’s in your blood, it doesn’t come out.”