The hippest new place to stay in Hot Springs leans heavily on the past while peering into the near future. The Best Court Motel, 638 Ouachita Ave., is a fully renovated motor court, that bygone brand of motel designed with the early car  in mind. It’s a U-shaped collection of connected brick cottages, each with a small front porch and an attached garage.

Like Brazil, Steve Arrison, the longtime CEO of Visit Hot Springs, the Hot Springs Advertising and Promotion Commission, envisions a not-too-distant future for Hot Springs where cyclists contribute as much to the tourism economy as folks coming to take in the natural baths, boat on Lake Ouachita or Lake Hamilton or to play the ponies and the “electronic games of skill” at Oaklawn (which would become an actual casino, with real cards and table games, if voters approve Issue 4 on Nov. 6).

The excitement surrounds the Nov. 17 opening of phase one of the Northwoods Trail project, 14 miles of multiuse trails designed especially for mountain bikes just minutes from downtown. The trails are the of the newly opened Northwoods Urban Forest Park, 2,000 acres of pristine woodlands north and west of downtown’s Park Avenue. The park includes three lakes that were built as drinking-water reservoirs: 13-acre Lake Bethel, 24-acre Lake Dillon and 28-acre Lake Sanderson. The lakes, along with much of the park, have been closed to the public since Sept. 11, 2001, for security reasons.

The park’s craggy hills and dense groves of oaks would be reason enough for outdoor enthusiasts to flock to the new park. But Arrison and other Hot Springs officials are positively giddy about what sets Northwoods apart: Because mountain biking happens in the wilderness, it’s rarely as accessible to other tourist attractions as Northwoods will be. “Mountain bike, get a beer at a place like Superior Bathhouse Brewery and soak in a bath — what a vacation!” Bill Solleder, marketing director for Visit Hot Springs, offered as a quick pitch during an October tour of trail construction.

A drive from downtown to Northwoods’ Waterworks Trailhead takes under 5 minutes. Sometime next year, Arrison hopes to see a new connection at Pullman Avenue, which would allow mountain bike tourists to easily pedal from wherever they’re staying downtown to Northwoods. Because the Pullman Avenue Trail Connection crosses about an eighth of a mile of National Park Service land, it will require an environmental assessment in accordance with the National Environmental Policy Act. The process is proceeding smoothly, Arrison said.

The other key differentiator for Northwoods: Most of its trails, though officially multiuse, won’t be mistaken for hiking trails. They’re being built like racetracks, with huge angled berms, hairpin turns, rocky obstacles and massive dirt ramps. One black section — like ski runs, mountain bike routes are designated green for , blue for intermediate riders and black for advanced — features a jump that sends a rider more than 20 feet across a man-made gap some 6 feet deep.

Hot Springs was in 2015 designated a bronze-level ride center by the International Mountain Bicycling Association, thanks to its proximity to three trails IMBA has designated as “Epic — iconic, adventurous, backcountry trails”: the 33-mile Womble Trail, the 108-mile Ouachita National Recreational Trail and the 45-mile Lake Ouachita Vista Trail (LOViT). Those routes fit in the cross-country category. Although Northwoods will offer a diverse range of trails for all skill levels, it’s likely to especially be a draw for dirt jumpers, advanced mountain bikers who are looking for trails that ride like rollercoasters, but with cars flying off the track.

IMBA’s Trail Solutions, an international leader in mountain bike trail development, designed and constructed phase one of Northwoods. The $1.3 million was funded by Visit Hot Springs and a matching grant from the Walton Family Foundation, which has put $74 million into cycling infrastructure in Northwest Arkansas. Josh Olson, a contractor for Trail Solutions, has been working on the trails since February and living with his crew in an Airbnb just above the Lucky 13, a black diamond trail designed by Randy Spangler, a famed mountain bike pro and designer. Olson has abroad and around the U.S. — to Austria, Utah, Idaho, West Virginia, Colorado, Alabama — building trails 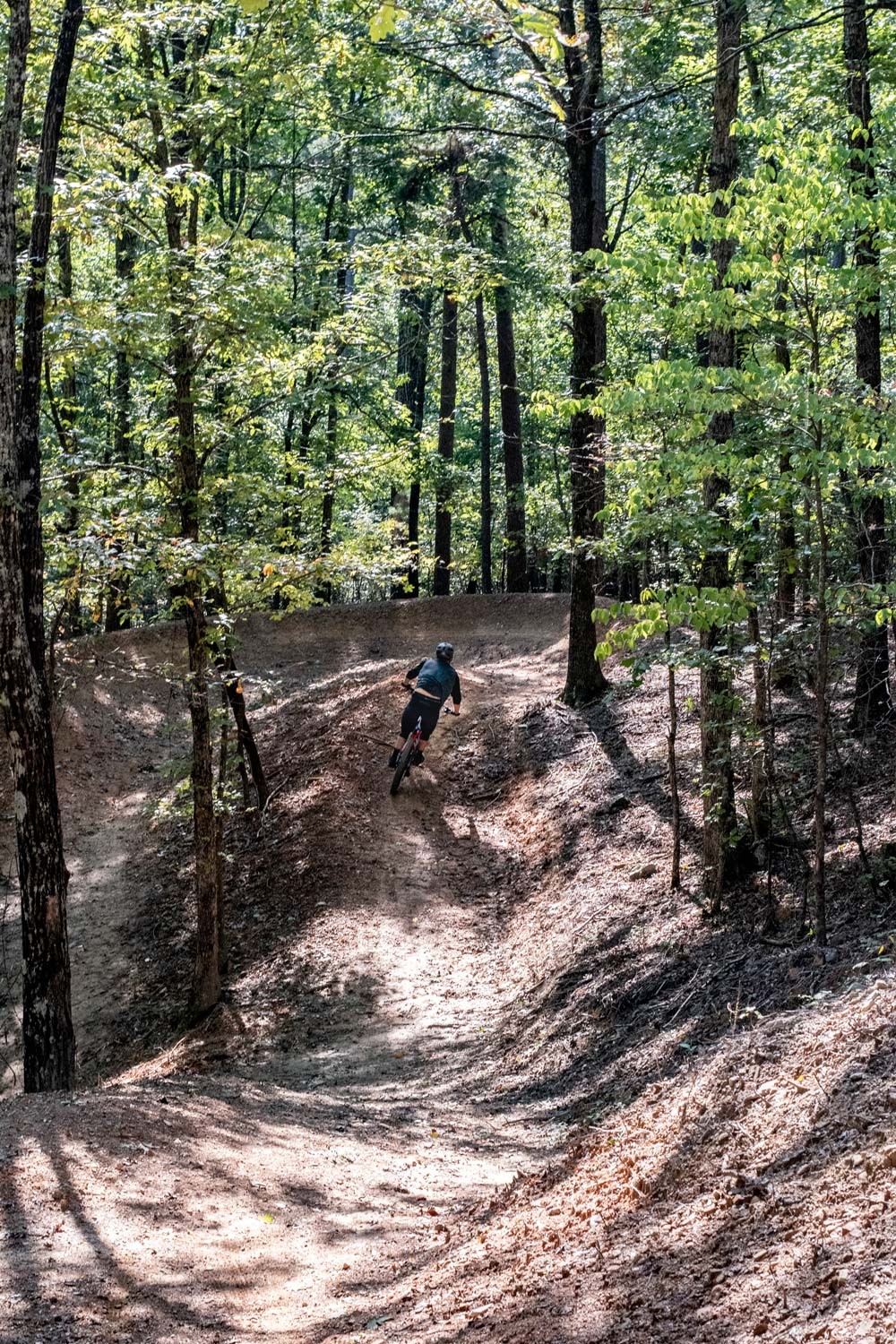 Another Trail Solutions specialist designed all the trails, considering topography and hydrology, and input them with GPS coordinates, so Olson and his team could access the layout. Olson and Co. are using mini-excavators and chainsaws to clear and build up trails. A “hand crew” follows behind to do fine detail work to try to make the trails look like they’ve been around for a while. “At first it looks like a construction zone, that it’s disturbed,” Olson said. “But at the we want to naturalize it. We’re going for an aesthetic that’s connected to nature — with jumps.”

For a demo, Olson rockets his fully tricked-out Specialized bike — carbon frame, carbon wheels, disc brakes, rear shocks (somewhere in the range of $7,000) — down a hill, swinging around a tree and gaining speed before climbing a short incline and launching off a rocky perch down into a short valley. He’s a Colorado native, but peripatetic. “Jumping really makes me want to travel,” he said.

Local riders may be wary to take some of the big jumps initially, Olson said. An alternative route accompanies each jump feature. Because most of the mountain biking around Hot Springs has been geared to cross-country riding, that’s what local cyclists . Hot Springs’ Cayden Parker, 14, is the USA Cycling Mountain Bike national champion in cross-country, but he hasn’t been interested in taking the big jumps in Northwoods during demo sessions, Solleder said. But, as pro-level riders come to town for dirt jumping, locals will take notice and start developing the skill, Olson predicted 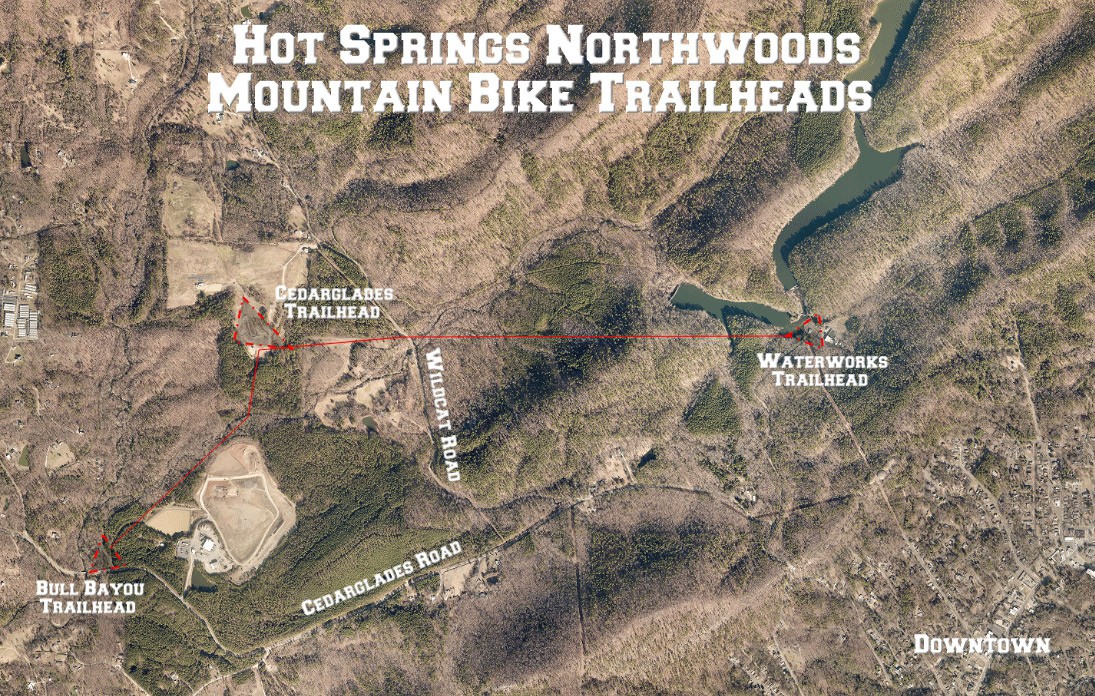 Visit Hot Springs and IMBA have already planned phase two of the project, which would expand the total number of miles in the park to about 44 and include loops around each of the lakes. A over the Lake Bethel dam is also envisioned. Nonmotorized water sports could be another attraction. Funding has not yet been promised for the second phase, though the Walton Family Foundation would seem to be a likely prospect.

Arrison said he’s watched closely at how bike projects have stimulated the economy in Northwest Arkansas. A study commissioned by the Walton Family Foundation found that it provided $137 million for the region in economic impact in 2017. “We’ve worked very closely and watched the blueprint of what Tom and Steuart Walton and the Walton Family Foundation have done in conjunction with Visit Bentonville,” Arrison said. “If you think about it like ‘Star Wars,’ they’re the masters and we’re the Jedi in-training.”

The first phase of Northwoods will connect to Garland County’s 10 miles of Cedarglades mountain bike trail. With the Hot Springs Creek Greenway Trail, a 4-mile trail from downtown Hot Springs to Lake Hamilton, nearing completion and the Southwest Trail, which would link Little Rock Central High National Historic Park with Hot Springs National Park, looming somewhere on the horizon, Hot Springs may be known first and foremost as a biking town before too long.

After you’ve hard and spent through all the adrenaline in the Northwoods, of you’re going to want a beer. SQZBX (236 Ouachita Ave.) is the city’s top new spot. Spouses Cheryl Roorda and Zac Smith, known widely as the polka duo Itinerant Locals, co-own the pizzeria and microbrewery (Smith handles all the brewing) and share space with KUHS-LP, 97.9, the solar-powered radio station they helped found. The structure used to house a piano repair shop; Roorda and Smith won a preservation award for their work restoring the beautiful building, which they’ve creatively decorated with retired accordions and old piano parts. The couple also just bought Starlite Club (232 Ouachita Ave.), the dive bar next door and, naturally, it’s become the place to be after dark, too. Another beautifully renovated space: Superior Bathhouse Brewery (329 Central Ave.), in the old Superior Bathhouse along Bathhouse Row, is the ideal spot for unwinding and people- watching downtown. Its beers, perhaps unique worldwide, are brewed using thermal water. 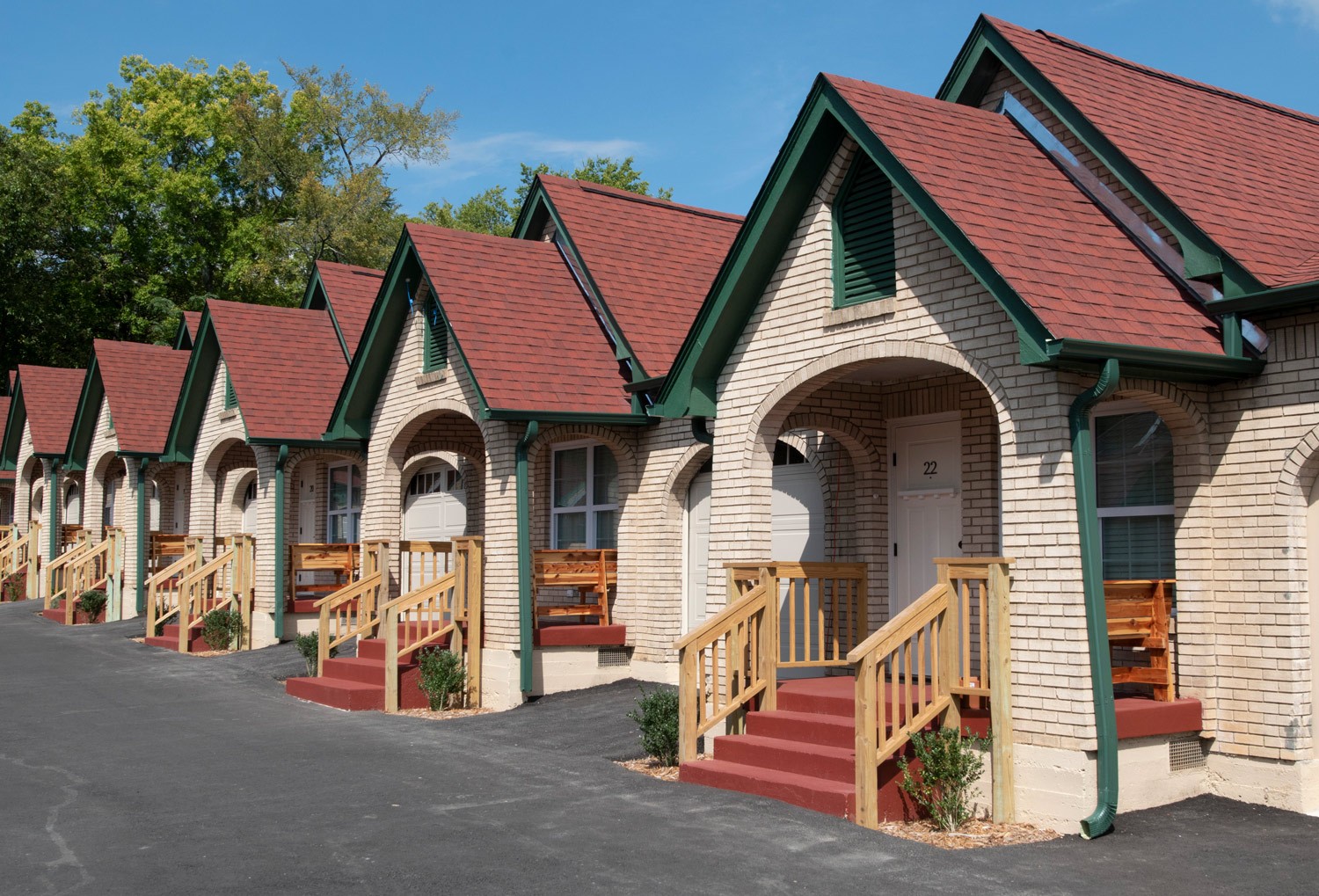 If it’s been a minute since you ventured to Hot Springs and left scratching your head wondering why there weren’t any nice places to stay in such a tourist mecca, take note! The boutique Waters Hotel opened in 2017 in the 1913 George R. Mann-designed Thompson Building, 340 Central Ave., and raised the bar on downtown accommodations. In its lobby, The Avenue does fine dining with a Southern flair. At 658 Ouachita Ave., Best Court Motel reopened in July after an extensive renovation. The large rooms have been updated with a modern but understated touch and include vintage-looking mini fridges and Adirondack chairs in the garage for sheltered, open-air lounging. Co-owner Jimi Brazil called one of the larger units the Marilyn Monroe suite. According to local lore, a baseball teammate of Joe DiMaggio’s owned the motor court next door to the Best Court, but its rooms were too small for Monroe, who insisted they stay next door in the Best Court suite.