Horseshoe Canyon Ranch sits nestled in a green, sprawling valley in the Ozark Mountains. It’s miles west of Jasper, and the ride there on Arkansas Scenic Byway 7 offers grand, sweeping views — but keep your hands on the wheel on this twisty, winding road. Surrounded by large sandstone bluffs, the dude ranch offers Western adventure with Southern charm, a getaway for seasoned rock climbers and families alike.

Riding trails, Buffalo River floats, disc golf, skeet shooting and Goat Cave spelunking are on the menu at the ranch, which is open to guests from March to November. There’s also tomahawk throwing and a 2,300-foot-long zip-line — the “Iron Horse” — that spans the width of the canyon, at one point more than 300 feet above the valley floor. (For the , there’s the “Pony Express” zip-line.)

The ranch’s 352 acres are divided into the West Side, which features the primitive campground where most climbers stay, and the East Side, where HCR’s famed yearly “24 Hours of Horseshoe Hell” 24-hour climbing event is held, and the North Forty, which HCR said is the most popular area because of its classic climbing spots. The “forty” refers to the original 40 climbing routes set up along the rock faces.

Adventure Guide Kris Evans, who is coming to the end of his first season working at the ranch, but who has been rock climbing there for six years, said guests often depart with a new sense of accomplishment. “When our guests leave, they leave very about their experience,” he said. “A lot of the time, if you look at our website, we don’t exactly advertise just how adventurous it is. … A lot of people just come thinking they’re riding horses. The next thing you know, we’ve got them on the side of a rock wall.”

The ranch offers many ways for guests to find themselves on the side of a rock wall, with over 500 routes — routes with preplaced protection such as bolts for climbers to clip into — spread about the land’s bluffs and boulders. One of those routes, titled the Green Goblin, was named one of Climbing Magazine’s 100 best sport climbing routes in 2015. The ranch also offers the Via Ferrata, a route with iron rungs bolted into the rock. Using a fixed cable, climbers can ascend a small distance and then traverse the wall horizontally instead of vertically. “It gives those intimidated by vertical rock climbing the same thrill, without the physicality,” the ranch website says. The Horseshoe Canyon Ranch Trading Co. is a climbing pro shop, where both experienced climbers or those new to the sport can buy gear. 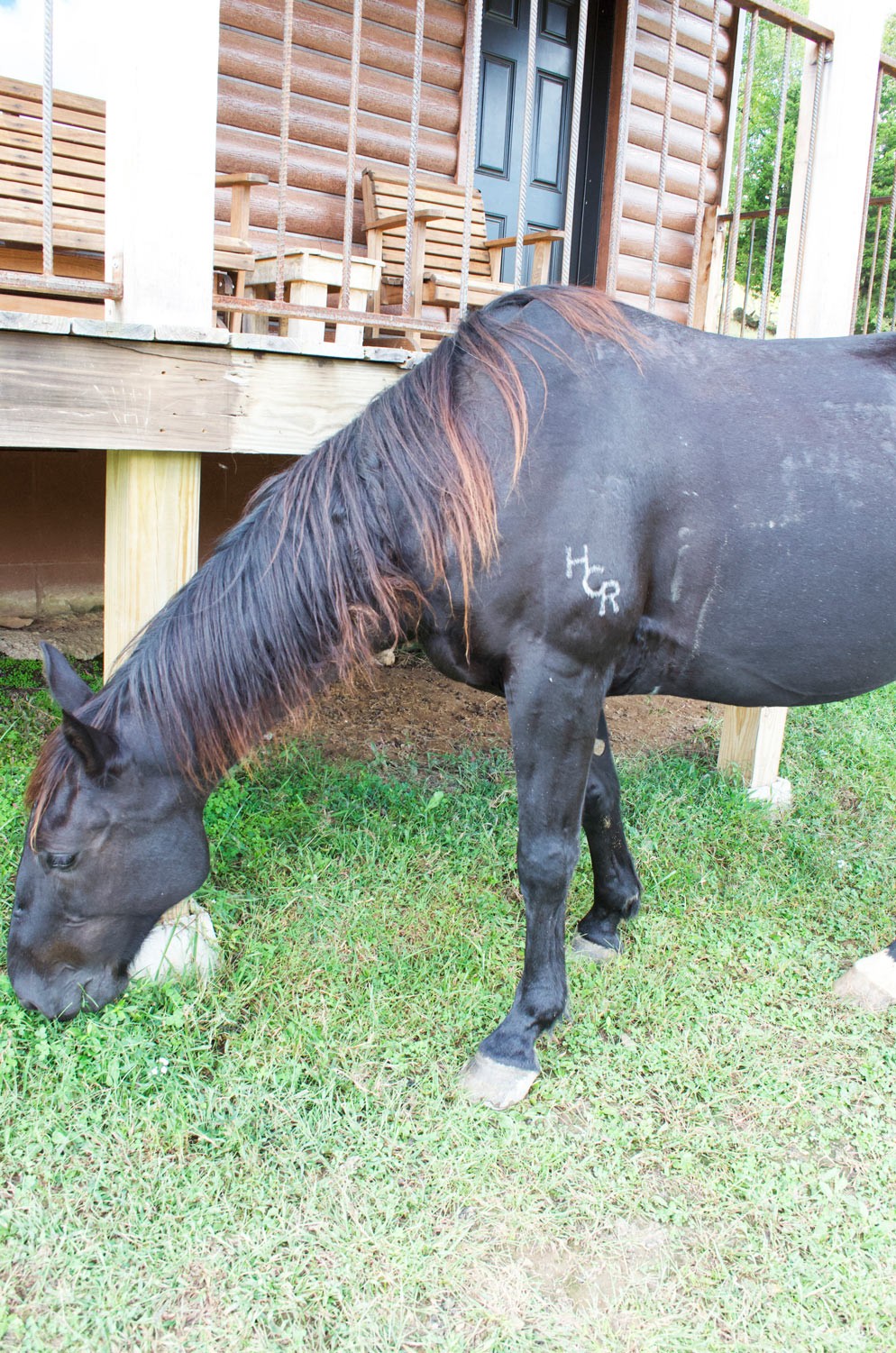 The ranch’s horseback riding trails are on a separate 352 acres. Fifty horses roam the acreage, and there are goats dotting the landscape, too. The ranch also features a petting zoo, home to a fat pig and a large, grain-fed goat named “Mental.”

For Evans, who along with his climbing partner Ardian Prishtina recently participated in the “Horseshoe Hell” climb, the thrill of teaching rock climbing comes from the student’s satisfaction.

“I get just as much excitement out of watching somebody climb their first climb as I do one of my projects,” he said. “It doesn’t matter how hard you climb, it just matters that you’re doing it,” he said.

On the afternoon we visited, young women at the base of the Green Goblin shouted words of encouragement to two other women during their careful ascent. Further down along the same stretch of rock, one young man worked as a belayer — the person on the ground who manages the rope to catch a climber in case of a fall or slip — while he watched his friend climb up the rock above him. He noticed Evans and shouted, “Hey man! I know you! You gave me a breakfast burrito the last time I was here!” Such is the effect that the ranch, and employees like Evans, have on guests. The place and its people are memorable, and they’re passionate about the languid, steady pace of life in the lush valley.

Guests can bring their own camping gear and camp at the ranch for pretty cheap — $5 per person to camp, and $10 per person for a day pass to climb — but the rates to stay in the cabins are pricier and depend on the season. For the fall season, Oct. 1-28, each adult pays $215 per day or $1,159 per week. The prices are all-inclusive of ranch activities and three meals a day.