“Churchill was hated by his own party, , and press. Feared by King as reckless, and despised for his bluntness. But unlike Neville Chamberlain, he didn’t retreat. We had a Chamberlain for 8 yrs; in @realDonaldTrump we have a Churchill.”  — Former Arkansas Gov. Mike Huckabee (@GovMikeHuckabee) comparing President Trump to Winston Churchill.

Governor Hutchinson has informed the Arkansas State Police that he believes a 2013 law made open carry of handguns the law of the land in Arkansas and they should act accordingly.

There is, as yet, no definitive court case that substantiates this view of the law. Since its passage, a debate has raged over the law’s meaning. Some contended it was merely meant to be a technical correction to Arkansas law that long had allowed the carrying of weapons on a “journey,” but not in all circumstances. Gun advocates argued that the wording validated open carry. Critics have argued that such an expansive view might override some of the restrictions in law on where concealed weapons may be taken. Hutchinson’s opinion carries no force of law, but the directive to an executive agency will have the effect of guiding state troopers, as indicated by a notice sent to troopers by Col. Bill Bryant, director of the State Police.

Hutchinson also informed prosecutors, through the state prosecutor coordinator’s office, of his belief that open carry of guns was legal in Arkansas. 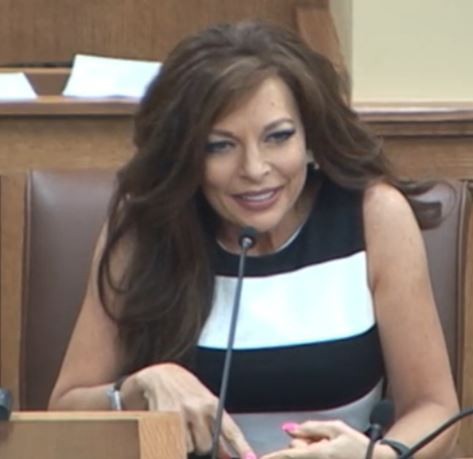 She said people know politicians are “taxing them into poverty, regulating them out of business and enslaving them with government entitlements.”

Among other specific references:

• She seems to want to put an end to corporate handouts of tax money, such as the governor’s quick-closing and specifically criticized handouts to foreign companies

• Taxes were cut in some places, but raised in others, she complained. The tax burden needs to be reduced, she said. And, of course, it can be done without a loss of vital services by cutting “waste.”

• She suggested the Arkansas adoption of Medicaid expansion had made insurance more expensive and harder to get. “Socialized medicine,” she calls it. The best government intervention in health care is none, she said.

• “Arkansas is a constitutional carry state,” she said.  She’s also said she was a “born-again Christian” and “genetically conservative” and, among other attributes, she said, “I ride my own Harley.” She won early fame for banning Muslims from her gun range, a policy that came to light after she ran off some dark-skinned Hindus. She claimed they were acting strangely and were not banned on account of their skin .

Files potentially bigger problems related to how tax money sent his way to build a local sports complex was spent. The FBI has been investigating. Files not seeking re-election.

The Booneville bank won priority on the properties against a long list of people seeking money from Files, including other banks, the Arkansas Development Finance Authority and firms that had done business with Files’ construction company. Files also on the losing end of a $1.8 million foreclosure judgment in an apartment project.