Round two winner: Epiphany and One Night Stand. Photo by Brian Chilson.

It was another great night of local music at the second round of the Musicians Showcase. The bar was full. I had to run down to the office and get something midway through and Sticky Fingerz easily had 5 times as many people hanging out than any other River Market spot.

Big up to Epiphany and One Night Stand. Their brand of live hip-hop has been a fresh change of pace locally since Piph recruited the musicians last year. But it’s not just the novelty of it now: The group really seems to be gelling into a punchy act. Epiphany writes smart, catchy lyrics and has a cool, tall man’s deep voice. All of One Night Stand’s players can do amped up jazz/soul right. And Gina Gee! Best R&B vocalist in town. She was sick last night, too, but still managed to belt out the hook to “5 Dollas,” the insanely catchy song that probably won it for em. If you missed the show, you can catch them at Windsong on Saturday night at the H.A.P.S. Live event. 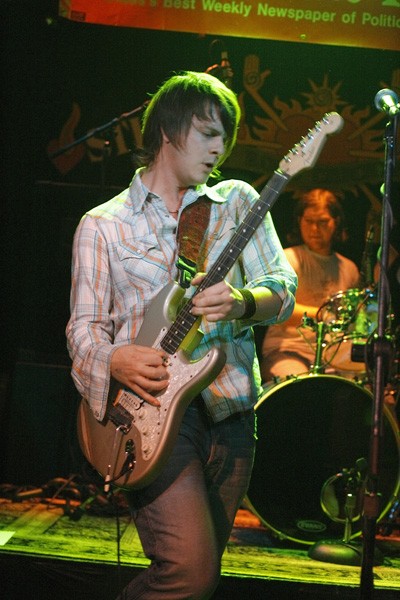 Notion kicked off the night impressively. As Colter McCorkindale promised in his  review of the band’s debut album in the Times, Shaun Hartman has serious lead vocal chops. Their set has nice stylistic variety — balladry, modern rockers, handclap pop-rock. If they stay together for a little while and make the right contacts, Notion seems poised to blow up beyond Little Rock. 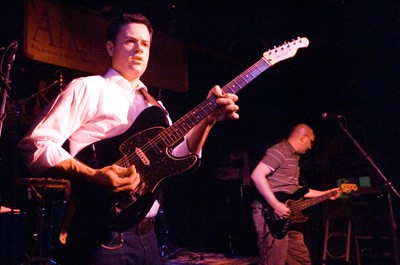 Graham Cobb and Johnny Mac of the Reds. In red light. The Maestro is all over . Photo by Brian Chilson.

The Reds followed with a fantastic set of punchy, post-punk. Johnny Mac writes really, really smart, catchy songs. And it was so nice to see a band that knows the importance of space in music, that less is often more. Mac’s bass (often capoed!) got front billing, which was awesome, with Graham Cobb’s guitar used mostly to accent. It’s a sound I can get behind. Early 80s. Young Police. The 1981 box set. Oh, and Jason Thompson is a super-sharp drummer. Always in the pocket. Catch the Reds on Monday also at Sticky Fingerz with the Magic Cropdusters. 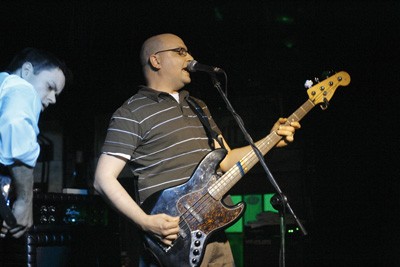 Bryan Frazier held the third slot down. The last time I saw him, he was doing his dreamy pop solo. Last night, he had a crack band backing him, which lent his material an extra bite. The judges dug it. The band came in second last night. Maybe this can become a steady thing?

Glen Hooks has a nice rundown, too, at CheckOneTwo.