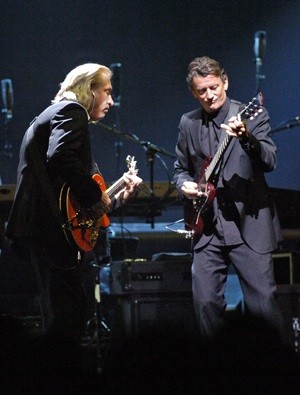 The four Eagles may immediately have bolted out of Alltel Arena into their separate, waiting limos hating each other when the show was done, but in front of 11,842 loud fans they were brothers in arms seemingly relishing every minute of their three hours on the Alltel Arena stage Tuesday night.

This was a far cry from their visit here in 2002, where elder statesman Joe Walsh was the only performer who offered much life, Glenn Frey was the only band member who spoke, and they seemed interested only in giving it the solid but no-frills performance while collecting another big paycheck.

Prices were slightly higher for the best seats this time ($154, compared with $96 the last time), but the band appeared to enjoy being here, the stage production was the best the band has ever featured, and nine backing musicians (including four horns) completed the package.