“FuN HoUSe,” an exhibition that uses the amusement park as a jumping off point for portrayals of relationships, brings the work of five artists to Gallery I of the Fine Arts Center at UALR. I am going to take advantage of a detailed press release by curator Brad Cushman to give you a little bit  more information about seven, who are not, in Arkansas at least, household names.

Zina Al-Shukri makes expressive marks in her multi-person portraits reminiscent of Alice Neel. …Al-Shukri marries moving and still imagery on the same picture plane to create portraits of Kevin Killin and Dodie Bellamy, contemporary San Francisco-based writers. The audio layer incorporated into this diptych of the couple discussing their relationship, references the tradition of storytelling.

Zina Al-Shukri was born in 1978 in Baghdad, Iraq. She currently lives in Oakland and works in San Francisco, California. Al-Shukri is an artist and teacher whose exhibition history includes Patricia Sweetow Gallery, San Francisco, Jack Hanley Gallery, San Francisco, and Pulliam Deffenbach Gallery, Portland, Oregon. She received a BA from the University of Arkansas at Little Rock in 2006 and an MFA from the California College of the Arts in 2009. Her process takes into consideration the notions of transition, conflicts/hybridity between culture/religion, individuality and shared experience, psychology and social determination, mysticism and technology. Al-Shukri’s portrait practice is seen as giving attention or a psychological ‘checking in’ to create a space of dialogue, illustrating the relationship between the individual subjects and their experience of social conditions. 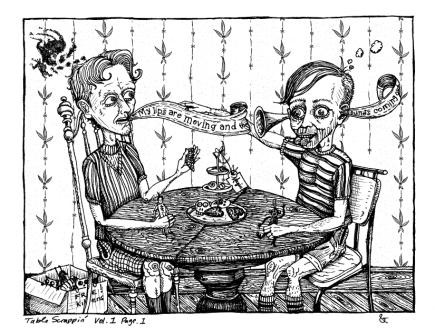 Chuck and George
Table Scrappin’ Vol. 1 brings the black and white images of Chuck and George to life. Since 1990, Chuck (Brian Keith Jones) and George (Brian Keith Scott) have been working together under this pseudonym. Here their compositional narratives on paper are displayed in an interactive space reminiscent of their graphic drawings and prints.
The fictional Chuck and George, inspired by longtime art collaborators “Gilbert & George”, sit at a table and show a cross section of life in a slightly off domestic setting. The couple play a game, watch television, eat, talk, listen to and ignore one another; all the while asking the big questions.
Brian K. Jones (Chuck) and Brian K. Scott (George) both earned a B.F.A. from The University of North Texas in Painting and Printmaking, respectively. Most recently they received the 2013 Dallas Observer Mastermind Award. The Brians live in Dallas, Texas. 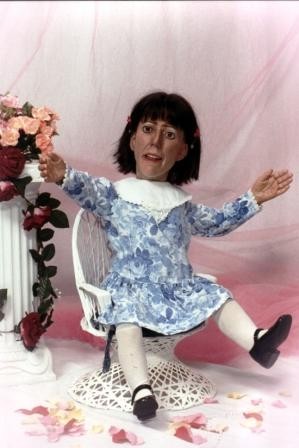 Weaving together her fascination with doll culture, the cult of collecting, and the subculture of missing persons, Heidi Schwegler tackles challenging subject matter in her project entitled Passing Resemblance.

Fascinated by women who collect, care for and display life size and very life-like dolls, Schwegler describes these dolls as “stuck in time, between the vulnerable moment of birth and the ever present fear of death – or worse: abduction.” In the studio, Schwegler’s own likeness captured in silicone becomes the head attached to a doll body. She casts the hands of a young girl and attached them to the doll’s arms.

Schwegler then took the doll outfitted in a blue flowered dress to Sear’s to have pictures made. Indeed, family portrait photograph takes a twisted turn in the studio fun house of Heidi Schwegler. 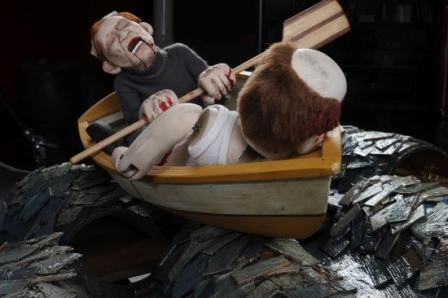 Dustin Farnsworth is currently pursuing two bodies of work that explore the post-industrial societies effect on the generations that have struggled through its collapse and the coming generation inheriting the weight of their forefathers foibles. These pieces navigate the darkness of mental spaces through the use of constructed architecture and hand carved wooden figures or busts. …

Dustin Farnsworth’s aim is to create original figures and architecture of the highest craftsmanship that evoke reference to industrial detritus while embodying the high drama and composition of a cinematic still, creating empathy between each figure environment and its viewer.
The design of The Myth of Life and Truth of Love and its kinetic nature encourages viewers to take part in a theater where the payoff is darkly evocative. The curtains, a literal connection to the theatre, provide the audience with a point of entrance. By engaging with the work the viewer is drawn into the spotlight as well, caught between the comedy and tragedy while becoming the enforcer of it. Through caricatured features, joints, and seemingly useless and awkward hands, the marionettes are disconnected from the viewer yet exude a raw and guttural emotion. The tragedy they are found in is simultaneously repelling yet impossible to turn from.