I was glancing through my Crystal Bridges Museum magazine, “C,” and noted its announcement there of several new acquisitions not previously mentioned in Eye Candy, works from the 19th, 20th and 21st centuries.

The museum has acquired Julie Mehretu’s “Retopistics: A Renegade Excavation” (above). Here’s what the Christie’s auction house website says about the work, which sold at the Post War and Contemporary evening sale in May 2013 for $4.6 million:

At once daunting and mesmerizing, like an epic tome, Retopistics is comprised of expansive, narrative gestures. It is theatrical; it encourages the eye to travel and asks the body to move closer. An extensive fusion of painting and drawing, Retopistics blends the mathematical rigor and constructivist logic of Le Corbusier, with the graphic onslaught and apparent chaos of Leonardo’s studies of the Deluge or Rembrandt’s febrile pen-and-ink drawings, and Lichtenstein’s comic Pop explosions. 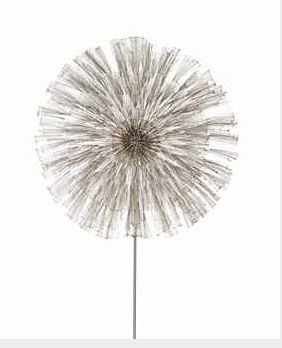 Crystal Bridges also acquired two mid-century pieces by Harry Bertoia, including the “Dandelion” from the Hilton Hotel in Denver (above), and the “Screen Tree” (below) from the estate of Ben and Natalie Heineman.

Mimicking the feathered dome of seed-bearing parachutes which burst forth from the stem of the of a Dandelion weed, standing over eleven feet high, Harry Bertoia’s Dandelion is shaped from thousands of welded stems that branch out in three successions. Weightless and whimsical, the flower is the perfect inspiration for Bertoia’s sculptural series. Consistently revealing his pioneering appreciation for the importance of surface, motion, negative space and ambient sounds, his radical sculptural innovations, inspired by the forms of nature, stand as some of the most inspired sculptures of the 20th century. While artists have consistently aimed to transform rather than imitate nature, for Bertoia there was no better inspiration than the perfection and symmetry found in flowers and trees. Designed by evolution, the Dandelion is the perfect form-fit for independent survival. 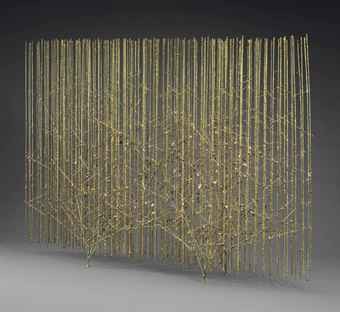 Made of hundreds of delicate strands of brass melt-coated wires, Untitled is one of the largest-scale examples of Bertoia’s straw inspired sculptures to become available at auction at over 7 feet wide. The sculpture at first glance seems haphazard in its composition, but in reality, the carefully assembled, interwoven and welded pieces create an impressive labyrinthine nest at the center which resolves itself in neatly ordered vertical strands at the exterior.

An interesting side note: The Arkansas Arts Center has a collection of Bertoia’s sketches for sculpture in its permanent collection.

“Young Marsyas (Marsyas Enchanting the Hares),” an 1878 oil by American symbolist painter Elihu Vedder, was sold at Sotheby’s in April 2013 for $93,750. The Sotheby’s catalog note has wonderful information about the painting, which Vedder did at his Rome studio, including the fact that the painter went out and purchased the rabbits from the Pantheon before starting work. The painting was considered lost for some time, according to Sotheby’s.