Read this month's issue
Browse the issue archives
Advertisement
Home Rock Candy Is Taco Bell’s breakfast worth waking up for?

It’s undeniable—despite what you may think of their food—that Taco Bell has a knack for drumming up excitement for their products. The “Doritos Locos” taco for example, put a whole lot of cash in someone’s pocket and late night munchies everywhere were satiated by this monster among mash-ups. Taco Bell recently announced they would be bringing breakfast to the people and immediately, the internet was buzzing. Customers were able the get their first taste of the Taco Bell breakfast last week, and so, in the name of due journalistic diligence, I took it upon myself to sample the early morning excitement of a Taco Bell breakfast. 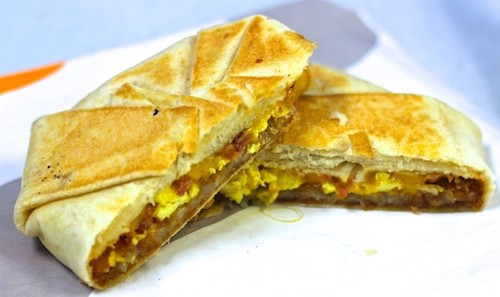 At the forefront of the Taco Bell breakfast menu is the “waffle taco,” an item that’s proven to be the most anticipated by Bell fans nationwide. Let me just destroy any hopes you may have about this thing being any good—it was awful. They take a frozen, pre-made waffle and give it a quick reheat. They stuff it with eggs, cheese and your choice of sausage or bacon. One bite was all I could palate. The waffle was chewy, spongy, and greasy. The eggs were nearly flavorless and the pale gray sausage patty rubbery. While I hate to sound so venomous, this was quite possibly the single worst item I’ve ever eaten at Taco Bell.

The sausage breakfast burrito did not fare much better. You’re already familiar with their low-quality, chewy tortillas, but now they’re filled with those same bland eggs and small pellets of chewy sausage that looked frighteningly similar to rabbit excrement. Again, I’d take a pass on this item. 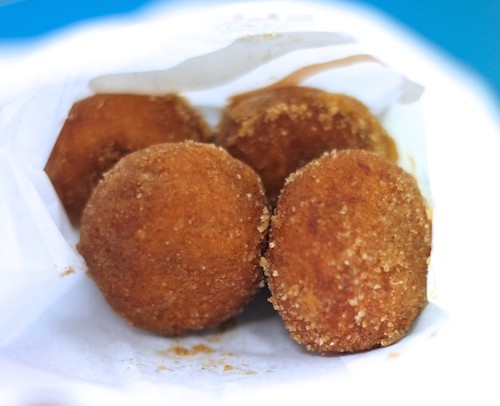 The “AM Crunchwrap” actually fared slightly better than the rest. It’s a large tortilla that’s filled, folded, and “grilled” between their heated taco press. I opted for the bacon variety this time, and along with small flecks of pork I found eggs, cheese, and a crispy potato hash brown within the tortilla. I have a soft spot for these greasy potatoes, and along with an ample amount of cheese and a little hot sauce, I was at least able to stomach this item…in fact, I finished the whole thing.

Lastly, we grabbed some of their “Cinnabon Delights.” These are small, greasy doughnut-hole-like spheres that are reheated, rolled in cinnamon and sugar, and filled with the “famous” Cinnabon frosting. These are not high-quality artisanal pastries by any stretch of the imagination, but I found them strangely enjoyable—in fact, they’re probably the only reason I’d ever stop by The Bell again in the breakfast hour.

I have a rather twisted relationship with Taco Bell. You see, I know (generally speaking) it’s terrible. But every so often, I’m once again seduced by that giant pink and purple sign and I find my car (almost against my own will) pulling into the drive-thru. But I’m very doubtful I’ll be returning to Taco Bell for breakfast until they do a bit of touch up work on their menu. And while I never expect a fast food drive-thru to deliver exceptionally good food, there are several other competitor restaurants offering a quick, hot breakfast that’s much more pleasing on the tongue than Taco Bell’s.