During a brief interlude in his powerhouse set last night at the Rev Room, rapper Tech N9ne posed a rhetorical query to the packed house: “Isn’t it cool how all us strange people found each other? Here … in Strangeland?” I may be paraphrasing here, as my hearing and mental faculties were overwhelmed by the outpouring of approving caterwauls and whoop whoops from the assembled legion of face-painted Juggalos, hip-hop heads, Affliction T-shirt enthusiasts and creatively dancing white girls. But this sense of mutually intelligible identity in an impressive subcultural mosaic—as well as the more pungent elements of hellfire B.O., marijuana and AXE cologne—was a consistent theme of the evening as a stacked bill of artists commanded the Independent Grind stage for a hyperkinetic, aggressive and yes, strange four hours.

My sojourn in Strangeland began when I arrived just in time to watch Pine Bluff-based rap collective 870 Underground take the stage, confronting the cold but amenable crowd with a five-deep crew sporting zombie contacts and masks. I was fiddling with my camera when, about three songs in, the sound was abruptly cut and the guys led the crowd in an insistent battle cry of 870! 870! 870! before mysteriously exiting. It became clear that technical difficulties were not to blame when a bandanna’d official of the Independent Grind camp emerged Oz-like from behind the curtain and intoned, in a voice recalling WWE emcees of the early 2000s, that only artists down with the Strange Music message would be on the stage. During this interruption, the crowd thickened: I saw, with equal frequency, liberally-gelled mohawks, tee shirts emblazoned with those unfortunate Nike catchphrases (“U Mad Bro?” claiming the highest tally count of the evening), teenage boys with the unshakable air of Boy Scouts despite their N9ne swag and, of course, Juggalos.

A word on Juggalos for the uninformed: Juggalos and Juggalettes refer to the fan base of the Insane Clown Posse, a Detroit-bred duo of face-painted purveyors of horrorcore hip hop. They may be identified by their preference for wide-leg JNCO-style jeans, the aforementioned clown paint, the Running Hatchet man emblem emblazoned on any and all available surfaces and their signature whoop whoop call. This is no casual, chilled-out fandom a la professing a fondness for, say, the Dave Matthews Band. Juggalos and Juggalettes converge at the annual Gathering of the Juggalos in an orgiastic celebration of all things Juggalo: music, public nudity, wicked clown face paint, oil wrestling and the consumption of a smorgasbord of intoxicants. Which is how Tech N9ne came to be embraced by the ICP fanbase — he has been a regular performer at the Gathering, showcasing the theatrical, rapid-fire and individualistic brand of hip-hop that the Hatchet Family adores.

Next to take the stage was Psych Ward Druggies, a West Coast assemblage of dudes just this side of 20 attired in orange, ostensibly psych ward-ian, jumpsuits. The four or so MCs were accompanied by a guitarist in a face mask, flowing Lady Godiva wig, top hat and surgical scrubs. The boys delivered raucous party jams (sample title: “DTF,” an acronym which watchers of MTV’s seminal “Jersey Shore” should be able to decipher) with disarmingly earnest enthusiasm.

At this moment, I made a choice which would have eventual repercussions. I pushed my way through the horde and secured a spot about five rows back from the stage, right beside the stairs. I was shoulder-to-shoulder in an environment that can best be described as moist and rank, two adjectives that should never accompany one another. As I situated myself among my sweaty comrades, Atlanta rapper Jarren Benton blasted onto the stage, flanked by a DJ in a full-face mask, snapback, hoodie and one of those “I Heart NY” shirts where instead of a heart there was a weed leaf. Benton hyped the crowd up to levels heretofore unseen with the unrelenting bounce of songs like “Gimme the Loot.” He invited audience participation, advocating stage dives and pulling fans on stage twice, culminating in one brilliantly awkward moment where, noting the proliferation of gyrating man flesh that had landed there, he requested “more ladies”. One note: Benton is one of the most smiley, charismatic rappers in my recent memory. He commands the stage with such a sense of showmanship and respect for his fans’ experience that it’s impossible not to respect his hustle.

Gary, Indiana native Freddie Gibbs (“Gangsta Gibbs”) was next up. Emerging in a blush colored Adidas track suit and bearing more than a striking resemblance to Tupac, he led the crowd in several rousing choruses of “Fuck the Police.” It was a constant, repetitive refrain that the crowd, by now growing more inebriated and numerous, joined in with abandon. Middle fingers were raised. Police were fucked, verbally at least. Gibbs spat a few genuinely well-crafted bars, perhaps a freestyle or two, but his nimble flow was encumbered by a set list heavy with formulaic beats and leaden, predictable lyrics extolling topics (coke dealing, home invasion, etc) that had all the resonance of cliches.

When Gibbs vacated the stage, the crowd grew restless. If I thought I was in close confines before, I was now experiencing new levels of intimacy with the strangers of Strangeland: the exuberant gentleman directly in front of me listed back and forth, roughly 300 pounds of wavering Juggalo, unintentionally bopping me with his frantic arm pumping, drunk on the experience and a whole host of other substances. As the lights dimmed and Krizz Kaliko alighted, signaling the imminent arrival of the night’s main event, the crowd dilated and constricted, with fans jockeying for better views. When N9ne appeared, the ensuing cacophony of approval from the roughly 600 assembled, was a sonic boom. People went nuts. Juggalettes commenced grinding their grinning, blacked-out boyfriends, the Boy Scouts went glassy-eyed with wonder and I got wedged so far into a corner I had to concede defeat and leave the stage-front territory to those more dedicated.

Once I was squeezed out of my prime spot, I had to appreciate the spectacle of Tech N9ne’s legendary live act from a far inferior vantage point: I saw it through a jungle of raised arms, some brandishing drinks, others Smartphones, intently documenting their experience. N9ne, with a tasteful smattering of face paint, professed his love for Juggalos, Juggalettes, everyone assembled. He jumped all over the stage, buttressed by Kaliko, rapping in his signature, impossibly fast paced cadence — occasionally taking a seat (discreetly placed by roadies) when the virtuosity required by his bars demanded a less physical presence.

I must admit that once I was on the periphery of Strangeland, and clearly lacking the fortitude and fervor to reclaim choice viewing real estate, my eye was drawn to the others on this Strange ride. I chatted with one of the dudes from Psych Ward Druggies, who confessed that a crucial rung on his ladder to touring with N9ne was being featured on the TV show “Made” five years ago (he was, fittingly, made into a rapper). I saw a few bare-breasted Juggalettes, most notably during N9ne’s rendition of “Areola” when the crowd’s most energetic flasher, an elated looking young lady, joined him on stage. As the show wound down, Tech N9ne addressed the crowd again, this time so lathered with sweat he looked like he was glowing. A beneficent figure before his flock, he declared that “tonight you’ve seen a real hip hop show.” I looked around at all the improbably different people gathered to take in the Independent Grind experience. Yes. A real hip hop show, in a Strangeland indeed. 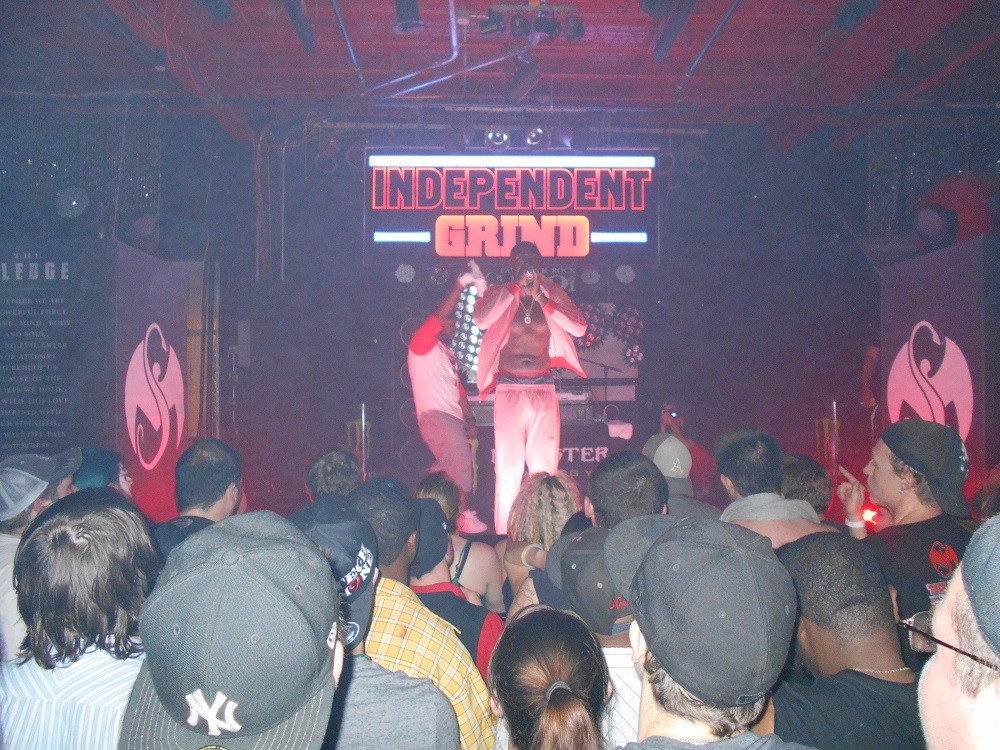