Editor’s Note: We’re excited to have a few new faces join the Eat Arkansas team. Jason and Shelle Stormoe are a husband and wife team that have been recording their adventures in food on their blog, Arkansas Mirepoix  I’ve been fortunate to get to know these folks and I can attest to their rich knowledge of Arkansas culture and history. We look forward to what they’ve got to share with us here on Eat Arkansas.

Of all the states that border Arkansas, Louisiana is arguably our biggest culinary influence. There’s a lot to pick from when we get a hankering for low-country food. Every year during this time, there’s a flurry of crawfish boils around the state. Boudreaux’s Grill & Bar at 9811 Maumelle Boulevard had a boil set up just outside the front door when we visited on a recent Saturday night. The place was packed with folks ordering up a few pounds of the traditional mudbug-corn-potato combination. 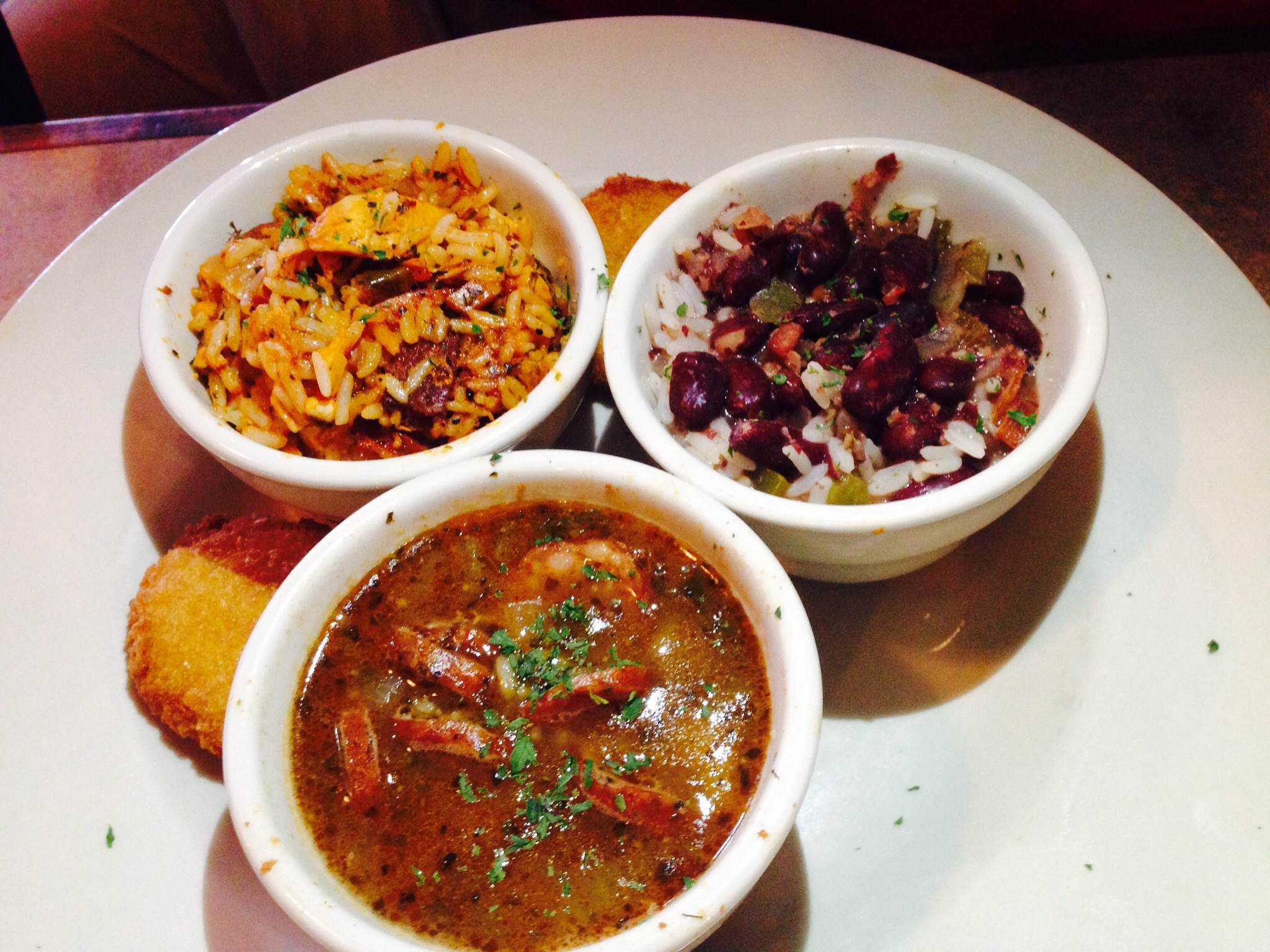 We wanted to get a better sampling of their regular menu, so we passed on the crawfish this time. Boudreaux’s offers two appetizer menus, one dedicated to bar food and another that offers twists on traditional Louisiana dishes. They serve fried oysters, alligator, and crawfish tails. We went for an in-house creation they call “catfish beignets.” The dish involves small bits of catfish that are soaked overnight in Louisiana Hot Sauce, coated in a secret breading, and fried. The owner told us that they tried twenty-six combinations for the breading before they got it right. The beignets take a minute to fully show their flavor. Don’t immediately start dipping them in the house-made remoulade like we did, because you’ll miss the kick of the hot sauce soaked fish. The catfish beignets were the stand-out of the whole meal.

The remoulade is excellent, don’t get us wrong. It comes from a recipe with fourteen ingredients, which are also a carefully held secret. We did manage to get the staff to tell us just the first one: a twenty-ounce jar of capers. 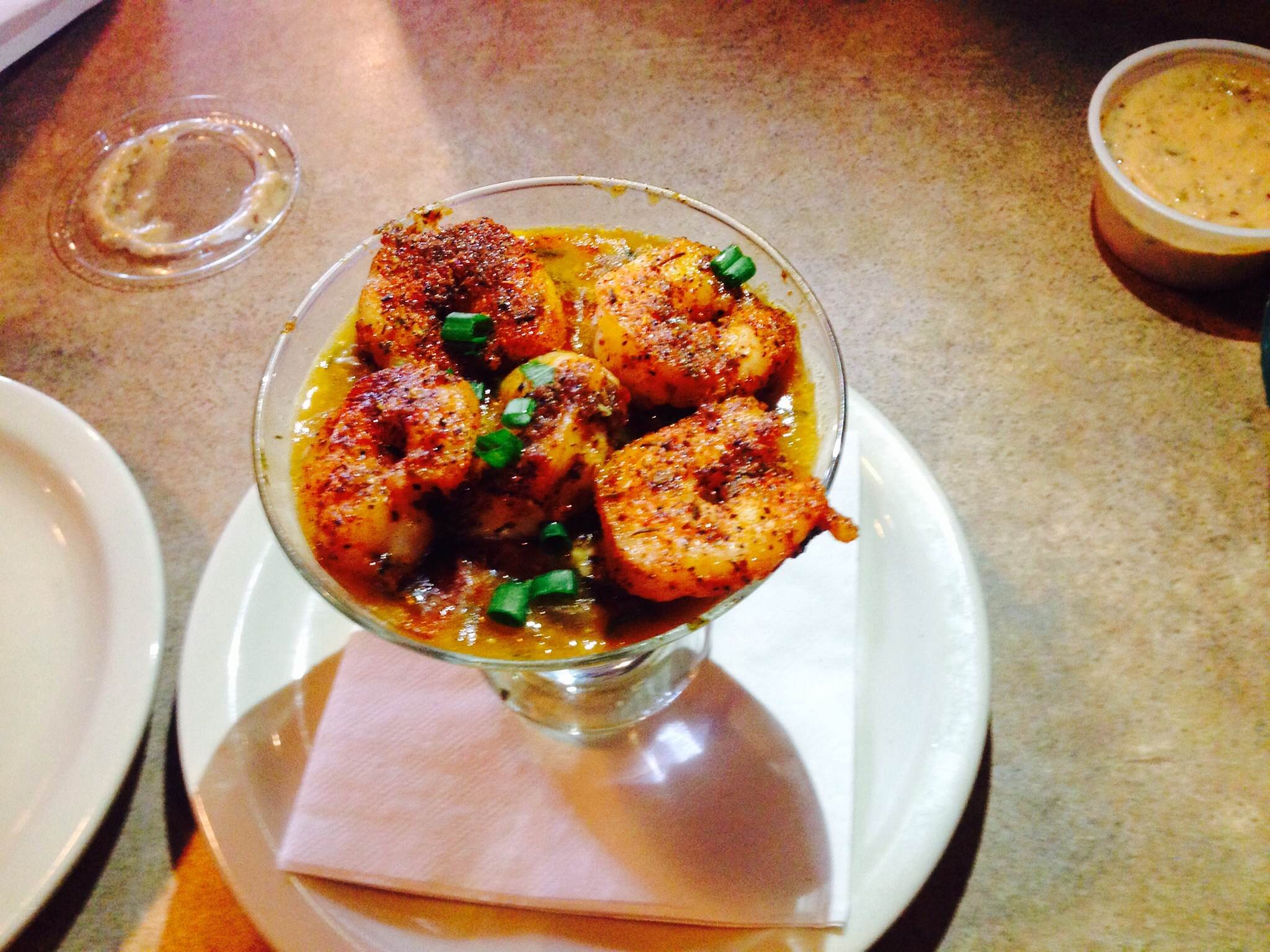 We also sampled the Shrimp Martini, which is grilled and seasoned shrimp with a glass full of cheesy grits mixed with crawfish tails. This dish wasn’t nearly the pleasant surprise the beignets were. The shrimp was well seasoned, but the grits had an odd consistency that neither of us liked much.

For our entrees we ordered the Cajun Trio (a cup each of jambalaya, red beans and rice, and gumbo), and a special lobster bisque that came with hot-water corn bread. The Cajun trio is decent, but doesn’t rise to the level of offerings at other similar restaurants in the area. The Oyster Bar makes a better red beans and rice. The jambalaya and the gumbo were fair to middling. The lobster bisque was light and not overly creamy. They used a good deal of cilantro, which we love but that some people might find off-putting. The hot water cornbread was crispy and light. It was a perfect complement to both dishes.

Boudreaux’s Grill & Bar has been doing a steady business for eight years in the same location, catering to sports fans of both the Razorback and the Tiger persuasion. The staff is cheerful and prompt with a drink refill, something we always appreciate. We will definitely head back when football season starts.

For more from Jason and Shelle, check out Arkansas Mirepoix.