At this point, you’ve probably heard of this “Paleo Diet” thing. Perhaps this term conjures up images of folks intent on eating prehistoric style meals—grilled sabertooth tiger and Fred Flintstone-style brontosaurus ribs. Actually, that’s not so far off. The Paleo Diet is based on the concept of eating food “to which we are genetically adapted.” It’s a diet that consists mainly of fish, meat, eggs, vegetables, roots, and nuts…things in which our hunter-gatherer ancestors would have no problem obtaining. Of course, there are several items, staples in most American diets, that these folks avoid—wheat and other grains, sugar, dairy, legumes, and potatoes, just to name a few. This may not sound very enjoyable to many folks, but there are a lot of people making it work—and while I’ve not thoroughly investigated the science behind it (and have not yet committed to this lifestyle myself…primarily because it cuts out doughnuts), I will say that several of the folks I know who have gone paleo are some of the most fit individuals I know.

Beast is a tiny food truck that has recently hit the streets of Little Rock. These folks are focused on bringing paleo-friendly foods to the growing throng of dieters accepting this lifestyle. And by the looks of it, they are being warmly embraced by this community—often selling out of food before the day is through. You’ll often find them parked near gyms and fitness centers—capitalizing on the fact that most paleo-people are also committed to fitness—many are part of the “CrossFit” phenomenon.

Being neither “paleo” or much of a “CrossFit” junkie, I was naturally a little skeptical about how much I would enjoy their food, but their menu seemed quite well thought-out, utilizing local producers and growers. I was determined to hunt down this Beast and sample its wares.

I found them on a Saturday morning at the Hillcrest Farmers Market serving breakfast. Several menu items caught my eye, but I decided on their “Primal Biscuits and Gravy,” and another item called the “3, 2, 1” which featured three slices of bacon, two scrambled eggs, and one biscuit. 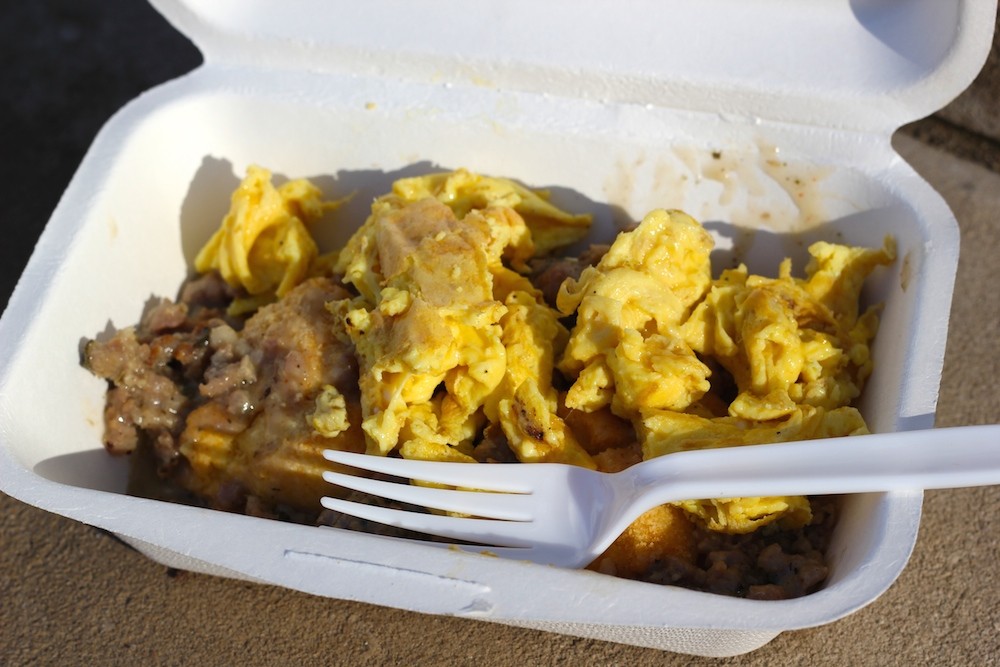 First, the biscuits and gravy. You can imagine that making biscuits can be a challenge when you’re restricted from using actual wheat and flour. Their biscuits use a sort of root vegetable mixture that’s been manipulated enough to turn out a product that appears surprisingly similar to a gluten-heavy, grain-based biscuit. It’s got some definite textural differences, however, as the paleo-friendly biscuits came out a bit drier and denser than most of their non-paleo counterparts. The scratch-made gravy, however, was excellent. Creamy, rich, and full of slightly spicy chunks of locally made breakfast sausage. It was a real delight. I ordered it with a couple of farm-raised scrambled eggs, which were perfectly light and well-prepared. It was a solid item, which I’d readily eat again if given the chance.

The “3, 2, 1” came next. This featured the same biscuits (minus gravy) and eggs, but this time paired with their house-cured, thick-cut bacon—and this bacon is definitely not to be overlooked. It was some fantastic pig. They utilize Freckle Face Farm products and the quality and attention given to their food really shows here. It’s crispy, salty, thick, and flavorful—you can’t ask for much more in your bacon.

I’m excited to track Beast down for lunch in near future. They’re offering an assortment of paleo-friendly items such as tacos with beef or chorizo, BBQ beef wraps, jerk pork, egg salad, and even Hungarian goulash with braised beef and chard. Follow them on Facebook or Twitter to see their regularly changing menu and locations.