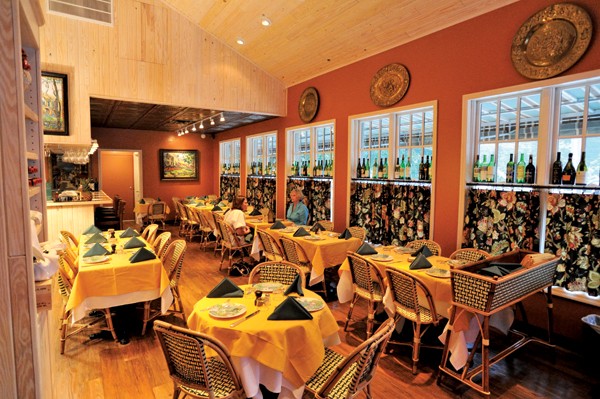 There have already been a few changes at Terry’s in the Heights located at 5018 Kavanaugh Blvd. We recently reported on the opening of “The Pie Shop at Terry’s ” a small in-house pie operation operated by Jeremy and Jacquelyn Pittman of Palette Catering Co. They’ve done well there thus far; their pie has been popular, and I can personally vouch for the addictive “oatmeal cream whoopie pies” — which are fantastic. But more pie is in the plans for the Pittmans … pizza pie.

Regulars of The Restaurant at Terry’s, the adjoining French-style bistro previously located on the south-side of the building, will have likely already noticed that the restaurant has moved to the north side of that same building. This has freed up the small space it once occupied. Along with their partner/pizza mastermind, Georges Launet, the Pittmans will be bringing Pizzeria Santa Lucia to this location.

Currently, the folks at Santa Lucia are in the midst of construction and renovations. They are extending the bar area to line the entire length of one side of the restaurant. In one corner will be their Mario Acunto wood-burning oven, constructed and imported from Naples, Italy. A large community dining table will fall in the center of the restaurant, and several smaller tables will be placed in the back of the restaurant.

The oven is expected to arrive in no more than five weeks. The Santa Lucia folks expect to have all construction complete by the time it arrives, so we can probably expect the restaurant to open in around two months. Hours will be 5 to 11 p.m. Tuesday through Thursday, and 5 p.m. to midnight on Friday and Saturday.

The menu will be similar to what is being served by Santa Lucia currently. Launet will continue to create a number of seasonal specialty pies, but they are expecting an “expanded menu” on Friday and Saturday nights. There will be some non-pizza items — charcuterie, olives and pickles, bar snacks, and a variety of pies by the slice from the adjacent pie shop. The space will also boast a full bar. Expect an emphasis on craft beer and a sizable wine list.