It was about a year-and-a-half ago that the former Restaurant 1620 reinvented themselves, rebranding under the name “1620 Savoy.” The name-change was a nod to Harlem’s first integrated jazz club, an inspiration for the restaurant’s new (at the time) jazz era décor. I visited that version of 1620 shortly after their opening. I left with the overall impression that it was a decent dining experience, some dishes were less impressive, some dishes were pleasant, but overall (especially for the prices they were asking) I would not be rushing back for more. In fact, until recently, I had not been back since this early visit. 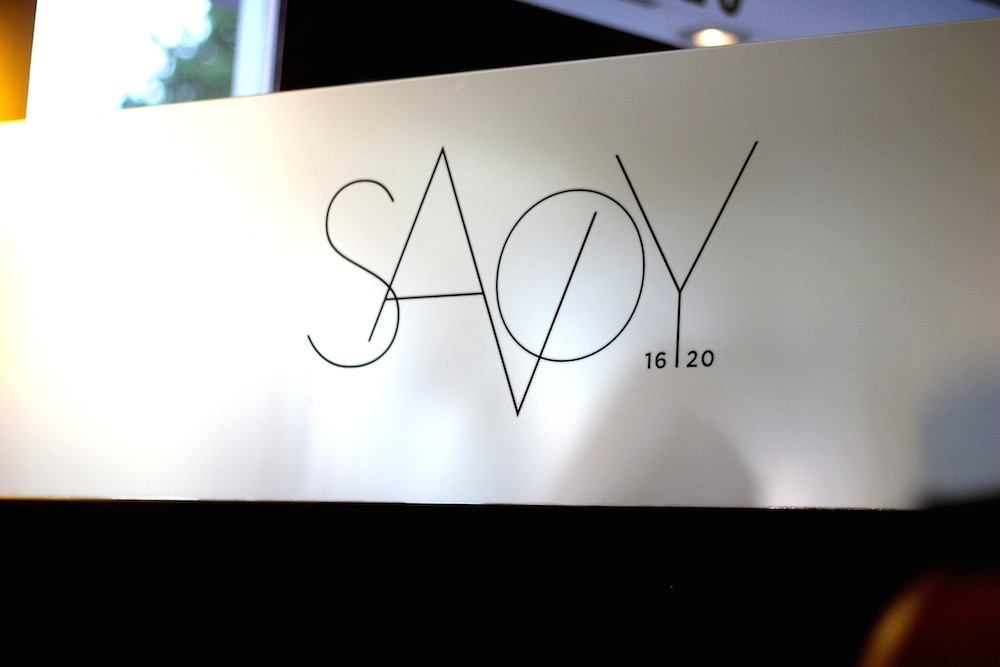 Apparently, I was not alone. Although the restaurant was bustling, nearly packed, at that visit, 1620 Savoy struggled to secure a clientele of regular diners. Simply put, no one was eating there.

But earlier this year owner and investor Rush Harding (of RH Cuisine) recognized that something needed to be done with Savoy. If ever there was a time to bring out the culinary “big guns,” this was it…and that’s essentially what Harding has done. Denis Seyer, a locally beloved restaurateur, was brought on a chief consultant for RH Cuisine to assist with menu development. Seyer, who was pulled out of semi-retirement, built quite a reputation in Little Rock with his work at the acclaimed, but now defunct, French fine dining restaurant, Jacques & Suzanne. He was later involved in Le Casse Croute and in the opening of the original 1620.

Clearly, for me, another visit to 1620 Savoy was in order…if for nothing else, to see if Seyer’s touch could mean great things for this floundering restaurant. A group of us made our way there recently and we sampled a fairly sizable chunk of the new menu. 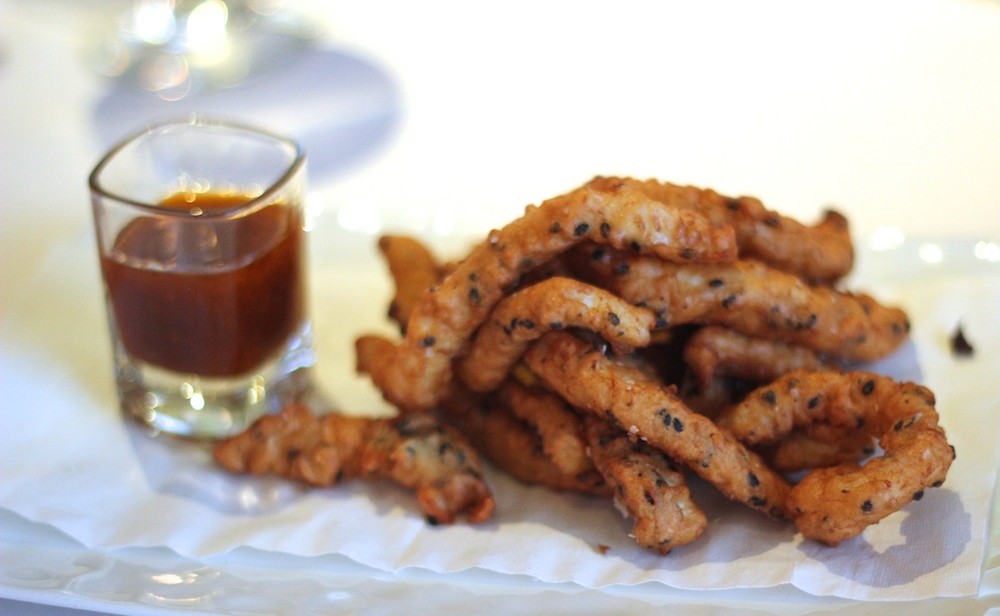 We began with salads—this included a smoked duck salad ($11), and iceberg wedge ($9). The smoked duck salad was particularly good—tender and flavorful duck with a hint of smoke that came through with every bite. It was accompanied by almonds, spinach, parmigiano-reggiano, and mushrooms—definitely one of the highlights of the night. Other appetizers included fried calamari ($12) and a warm goat cheese focaccia ($11). The calamari was less impressive—limp, not crispy and certainly not something I’d be craving again. The focaccia was better—a flatbread smeared with tangy goat cheese baked with herbs and black olives, with a topping of fresh, peppery arugula. The bread was a little tough to chew through, but otherwise the dish was successful.

Admittedly, we had a difficult time choosing our entrees as several dishes were intriguing—but we settled on a few after much deliberation. Among the more noteworthy dishes was the 8 oz. “Filet Mignon Béarnaise” served with a side of “truffle scented” mashed potatoes, steamed broccoli and bell peppers. It was perfect. The steak was tender and cooked to a lovely medium-rare. The béarnaise sauce was creamy and flavorful, complementing the beef and not overpowering it. The potatoes were creamy and soft and even the vegetables were consumed with gusto. 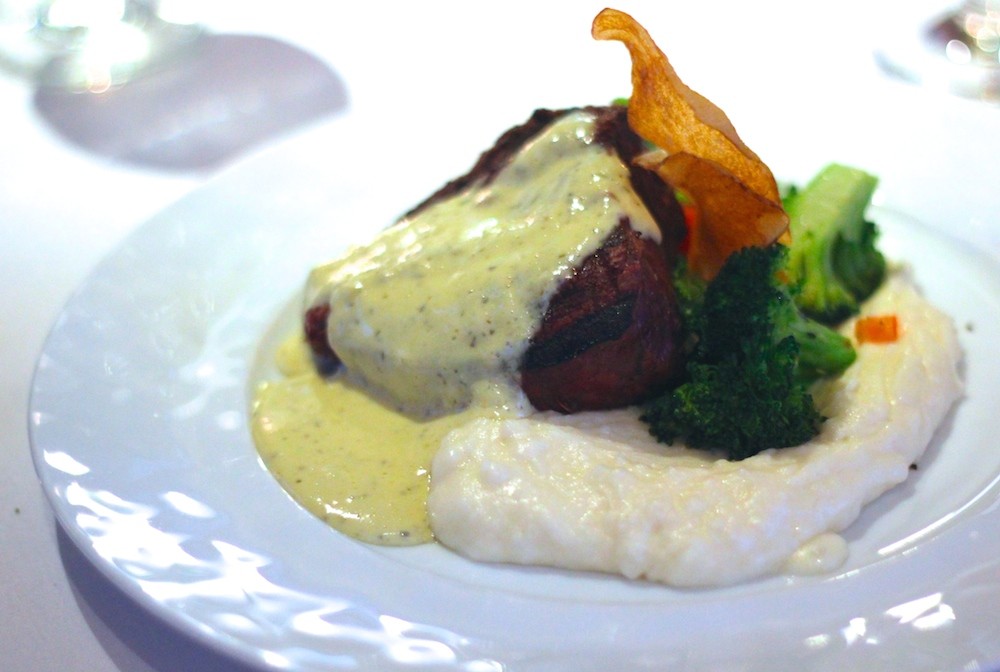 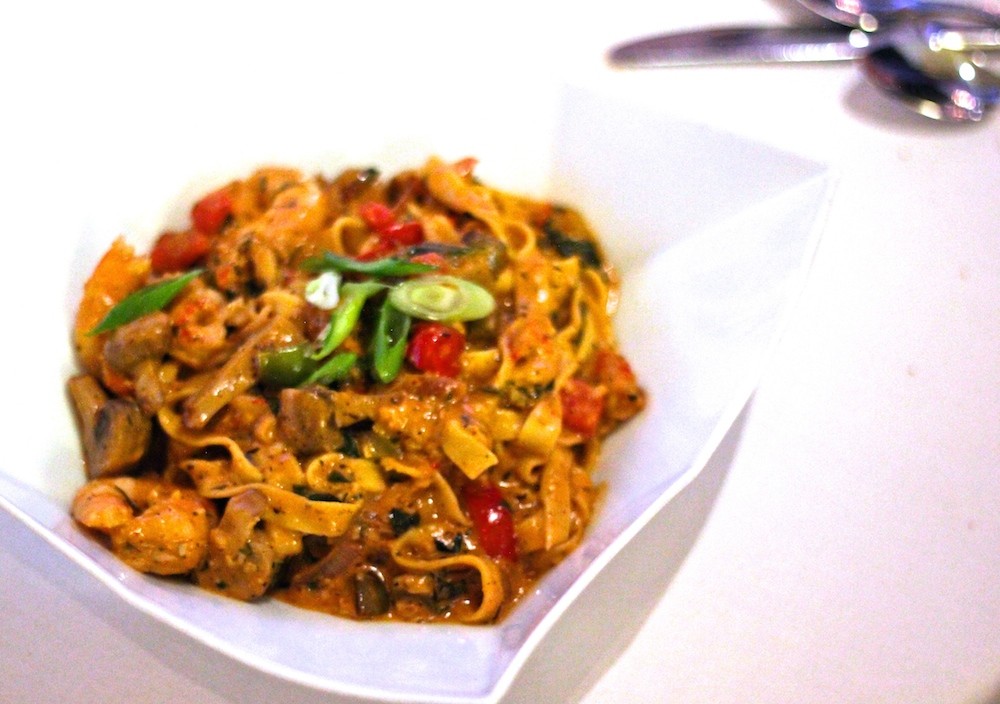 “Rush’s Homemade Fettucine” ($24) with shrimp, crawfish and Creole cream was another winning item at our table. The pasta was cooked well, slightly al dente, and the cream sauce was spicy, rich, and in perfect proportions. It’s a fairly heavy dish, actually, but something that should not be missed.

Less successful were the “Lemongrass Scallops” ($26). Here you’ll find scallops sliced to about a half-inch thick, poached in a green curry broth with sweet potato curls and bok choi. While the description made us salivate, in actuality the scallops were a bit disappointing. We missed that lovely golden sear seen with many of the best scallop dishes, and the green curry broth was a bit too watered down, making the entire dish fall flat.

Desserts were probably the low-point of the night. The Grand Marnier Souffle ($10) was edible, but nothing spectacular. There was a rather plain chocolate crème brulee and an ordinary mango cheesecake. Nothing we’d be particularly keen on eating again.

Compared to my last visit, 1620 Savoy’s menu has definitely seen some improvements, and I left with an assurance that Seyer’s talents for menu planning and restaurant development have not been entirely wasted here. But Savoy still faces some obstacles that may be difficult for many diners to overlook. It’s not cheap. And when diners are shelling out a sizable chunk of change for dinner, there’s an expectation there that everything—from the service to the food to the décor—will be worth the extra expense. During our visit, the dining room was painfully empty…and this was a Friday evening at peak hours. It was difficult to determine if the ambience suffered more from the empty seats or the slightly stuffy décor. Only time will tell is Seyer is enough to save Savoy.