How fabric artists of the 21st century are interpreting a traditional craft is the theme of “The Sum Of Many Parts: Quiltmakers In Contemporary America,” an exhibition at Laman Library’s Argenta branch, 420 Main St. in downtown North Little Rock.

Quiltmakers from 14 states contributed 15 works to the Exhibits USA traveling exhibit, which showcases varying styles. A press release from the library describes the handiwork of three of the 15 quilters in the show as an illustration of the crafters’

Bonnie LeBeau, for example, is a Native American artist based in South Dakota who creates traditional, hand-crafted star quilts. The artistry of the star quilt was first introduced to Northern Plains Indians by missionaries in the late 1800s and ultimately led to the replacement of the sacred buffalo robe used for tribal ceremonies and special occasions. Star quilts are often intended to honor and protect the person for whom they are made. LeBeau’s hand-crafted designs, including Ano Peta (Morning Fire), which is featured in the show, reflect the techniques, stories, and symbolism that were passed down from generations before her.

Erick Wolfmeyer of Iowa City, IA on the other hand, attended art school and was professionally trained in photography before taking on quilting later in life. Merging utility with beauty, Wolfmeyer’s works reinterpret traditional quilt patterns and are inspired by the landscape and colors of the rural Midwest. 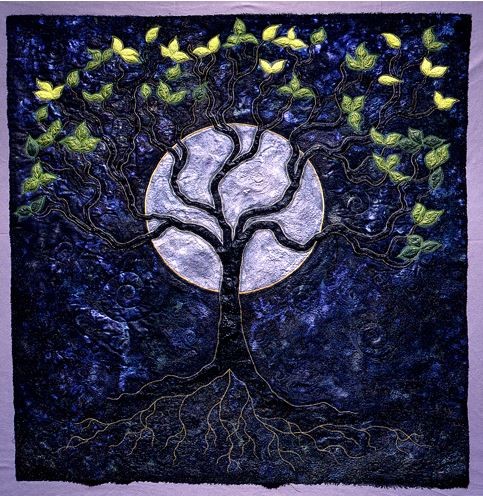 Longtime fiber artist Dottie Moore, who resides in South Carolina, describes her nature-inspired quilts as “visual conversations with fabric and thread to explore the mysteries of earth and sky.” Moore’s pieces, which are completed without the use of sketches or pattern, often feature trees, pathways, and mountains. On display in The Sum of Many Parts is Moore’s “Metamorphasis,” a striking quilt that took ten years to finalize by combining layers of hand-painted fabric, cotton batting, and machine embroidery.

The exhibition will run through Aug. 16. The library is open 10 a.m. to 6 p.m. Monday through Saturday.